April 25 2016
71
Today, one of Russia's most recognizable and extraordinary politicians, Vladimir Zhirinovsky, celebrates its 70 anniversary. The founding father and permanent leader of the Liberal Democratic Party of Russia (LDPC / LDPR) and one of the champions in the number of participation in the presidential elections in Russia (5 times, starting with 1991 year). 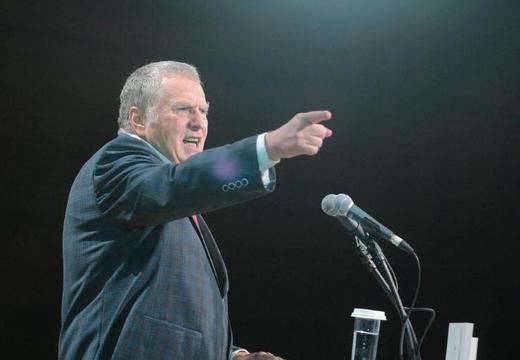 Vladimir Zhirinovsky (Vladimir Eidelstein) was born in the post-war 1946 year in Almaty. Graduated from Alma-Ata secondary school №.25 named after F.E. Dzerzhinsky. In 1964, he entered the Institute of Oriental Languages ​​at Moscow State University named after M.V. Lomonosov, who graduated in 1970 year with a degree in Turkish Language and Turkish Literature. From 1965 to 1967 He took a course at the University of Marxism-Leninism. In 1972, he entered the Law Faculty of Moscow State University and five years later he successfully graduated with a degree in law.

From 1970 to 1972, he served as a military conscript officer. The place of service is the political directorate of the headquarters of the Transcaucasian Military District in the city of Tbilisi. In reserve, Vladimir Zhirinovsky retired with the rank of senior lieutenant.

The political debut of Vladimir Zhirinovsky can be considered May 1988 of the year, when he became a member of the constituent congress of the Democratic Union, which was headed by Valeria (deceased) Novodvorskaya. During the congress, Zhirinovsky was elected to the coordinating council of the party, which acted as a tough opposition from the CPSU. In the “Democratic Union”, Vladimir Zhirinovsky did not stay long and, having left it on his own initiative, decided to form a new political force - the Liberal Democratic Party of the Soviet Union. 13 December 1989, the first meeting of the initiative group to create the LDPC was held. And on March 31 of the Year 1990, the founding congress of the new party took place in the House of Culture named after Rusakov (Moscow), which brought together 215 delegates from 8 of the Union Republics.

Vladimir Zhirinovsky has not changed this party due to the collapse of the USSR, which changed its name to the Liberal Democratic Party of Russia. According to the hero of the day, the party has every chance to take second place in the upcoming parliamentary elections. At the same time, the hero of the day himself admits that the party has too few known names, unlike the same “United Russia”. According to Zhirinovsky, many sympathizers of the Liberal Democratic Party from among teachers, doctors or military personnel simply cannot afford to enter the party’s regional lists, since “the party of the parliamentary majority is under considerable pressure in terms of if they represent opposition political force”. How far today the Liberal Democratic Party of the opposition party is an open question, but this is a completely different история.

For now - to Zhirinovsky 70! And, as Vladimir Volfovich himself says, “as soon as I have turned seventy years old, I will say that I am starting to prepare for the 75 anniversary”.

Ctrl Enter
Noticed oshЫbku Highlight text and press. Ctrl + Enter
We are
Zhirinovsky proposes to return to Russia the borders of the sample 1 January 1917 of the yearAnniversary of the famous Borisoglebsky Aviation School (BVVAUL named after V.P. Chkalov). Report "Military Review"
Military Reviewin Yandex News
Military Reviewin Google News
71 comment
Information
Dear reader, to leave comments on the publication, you must sign in.