Why Kirov is not quite Russia, or How to Cut Down Money on Victory

April 25 2016
167
Interesting city of Kirov ... It seems to be ours, Russian, but some things allow us to doubt this. What is the reason, you can not say right away, you need to understand. Whether Nikita Belykh’s superblogger is to blame, or his superzam Masha Gaidar worked well in her time, I don’t know. But for some reason, some of the concepts in this town are distorted so that you wonder. As if something is added to the water. 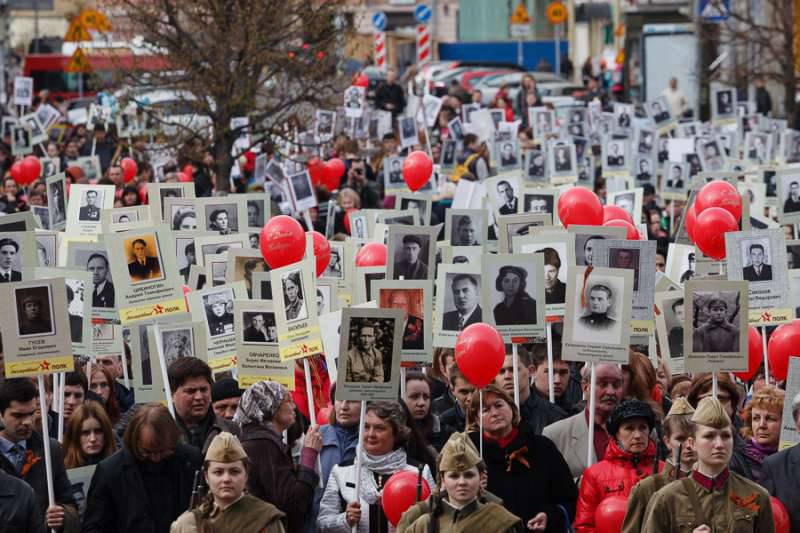 The attention of the Internet community attracted the publication of the "Immortal Regiment" in Kirov. The theme is that every year stirs the minds and hearts. But this year in Kirov something was utterly undone.

But in Kirov it's not like that. For the fourth year in a row, the All-Russian campaign in Kirov has been organized by the newspaper Pro Gorod, First City Channel and Radio Maria with the support of the city administration.

On the city site The immortal regiment 2016: how to become a member of the action this year amazing things are written.

Polina Seregina, one of the coordinators of the project "Immortal Regiment":

"Not so much time is left until 9 May. From 4 April we will again begin accepting applications for making portraits of veterans. I ask everyone to treat the action with understanding: its goal is to honor the memory of our grandfathers and great-grandfathers who gave us the Victory, life. Not all the participants of the action will be able to see those festive actions that will take place on the square during the parade. When our regiment stands in ten rows, it is simply impossible. Our goal is different! It is important that those whose lives were at the price of Victory should stand on that day in one system, be the center of attention. This is the main thing. If you want to just become a spectator of the parade, show it to the children, it’s better to just watch it on TV or standing behind the barriers in the square. "

Strange words. Everywhere they say: come all, but in Kirov somehow differently. But we go further.

Applications are accepted from 4 to 22 April on weekdays from 14 to 19 hours at: Oktyabrsky Avenue, 120, first floor. Production cost - 500 rubles. To apply you need:

- photo of the veteran;

- surname, name, patronymic, rank with which he ended the war;

As before, it will be possible to attend the parade only by invitations, the number of which is limited. Information on invitation tickets will appear later, stay tuned the news. Hotline phone 467-998.

Like this. The number of invitations is limited, and they are, apparently, only to those who bring in a portrait of an established and agreed upon sample of 500 rubles.

I agree, the amount is small, the memory is more expensive. But the words of the activist Polina Seregina that “those whose lives were the price of Victory, rose on one day on this day, were the center of attention. This is the main thing” becomes understandable.

To become the center of attention is to pay.

But here you are, information from my Voronezh. We also honor the memory, we also have marches of the regiment, although in May 2015, it was rather a division, and not one.

The My Documents Centers in the Voronezh Region also participate in the Immortal Regiment action. But how?

"This year, multifunctional centers have provided additional opportunities for the replenishment of the Immortal Regiment."

From April 18 to May 7, Voronezh residents can come to multifunctional centers, bring on electronic media photos of their relatives, neighbors, neighbors - participants of the Great Patriotic War, print them for free and if necessary make a small correction. To do this, simply contact the administrator. "

And further - addresses. 4 in the city, 14 in the area. In all district centers.

Come, we will correct, we will print.

What is the reason, honestly, I do not understand. Could it be that on the Voronezh land some of the bloodiest battles on the territory of Russia took place? And in Kirov, no? Or other people?

Why in Voronezh and other cities you can just come with a portrait of your grandfather, and in Kirov - only with the one that will be made by the organizers? With her, apparently, will not be allowed.

For example: in the 2015 year in Voronezh, the regiment's procession turned into something badly representable. Even the organizers were not ready for such a number of participants. 30 000. Thirty thousand. Army.

But I am sure that the people of Kirov will pay. It is unlikely that they want to be worse than other Russians. Even better. We will go for free, and they - giving their money in the pocket of outright freaks who want to make money on our memory.

I wonder where the gentlemen of the Whites and Hops are looking? And who, in general, is simply obliged to bear responsibility for the frank lawlessness, which suits, according to the city newspaper and the portal "About the city", the Kirov administration?

Considering how and on what the Kirov leaders decided to make some extra money, I think this is just the case when our Prosecutor General's Office should work. Yes, and Mr. President, the chief of the "Immortal Regiment", it will not be superfluous to inform. It is said that after informing Putin properly, the prosecutor’s office digs so that the ravines remain.

Apparently, and should do so. So do.

By the way, I am sure that at the time of publication, since I’m not the only one in Russia who was up to date, there would be no information on the Progorod site. On behalf of all who responded to this disgrace, I want to assure the Kirov dealers from the Victory: we have done so many screenshots that it is enough for everyone.

This is our victory. And we, as you know, do not stand behind the price.

Especially, if the price - only letters to the president and the Prosecutor General.

Moreover, I am sure that among those who have read and commented there will be more than one person who will support this point of view. So, a letter from the "Military Review" with a complaint to the frank villains from Kirov will be considered collective.

On the response to the treatment will report as received.

Ctrl Enter
Noticed oshЫbku Highlight text and press. Ctrl + Enter
We are
Victory Day and the "Immortal Regiment" in BulgariaOr maybe just the way it should? A couple of words about the "Immortal shelf"
Military Reviewin Yandex News
Military Reviewin Google News
167 comments
Information
Dear reader, to leave comments on the publication, you must sign in.