As a warrant officer Schegolev defended the whole of Odessa 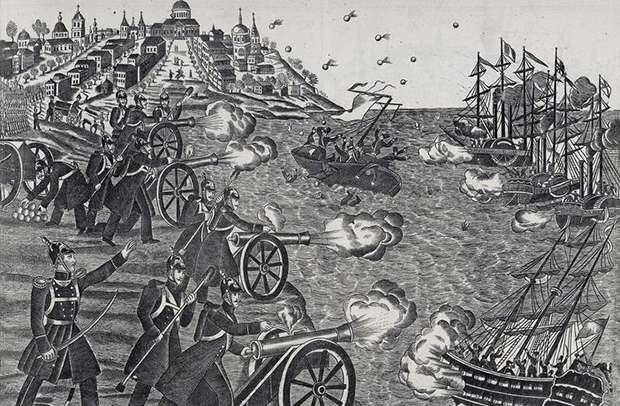 22 April 1854, the only four-gun battery prevented the Anglo-French squadron to land troops in the port of Odessa
Most of the inhabitants of Russia, the Crimean War of 1853 – 1856, is known primarily for the heroic defense of Sevastopol. A much smaller number of our compatriots will remember that in the world this war was called Eastern and that during its course military operations took place not only on the Black Sea, but also in the Pacific Ocean, where the Anglo-French troops did not take Petropavlovsk-Kamchatsky in August 1854 of the year, and in the White Sea, where the British bombarded the Solovetsky Monastery and the city of Kola, the satellite of present-day Murmansk. And there are almost no people who know about the first major feat of the Russian army during the Crimean War, more than two months before the attack on Sevastopol. 22 April (10 old style) 1854, a four-gun battery under the command of Ensign Alexander Shchegolev, fought a battle with the enemy’s squadron many times over for the number of guns for six hours - and still did not allow her to land troops in the vicinity of Odessa.

Odessa met the beginning of the Crimean War in a state of almost complete unpreparedness for defense. A purely commercial port was not at all adapted to resisting the onslaught of the enemy for a long time if he chooses to attack him. And although after the Anglo-French fleet entered the Black Sea in January 1854, the troop group in Odessa was tried to be strengthened, it was difficult to call it a serious rival. Russian troops in the city only had hastily deployed six batteries in the vicinity of the port with a total number of 48 guns and the forces of the Odessa garrison, which numbered up to 6 thousands of bayonets and 3 thousands of sabers with 76 field guns. But, as it turned out, among these small forces there were quite a few heroes who managed to turn weakness into strength. And the first among them was Ensign Alexander Shchegolev, the commander of the left-flank 6 battery, located almost on the outskirts of the port - on the Military Cape in Practical harbor.

The battery of ensign Shchegolev, who served in the 14-th reserve artillery brigade in Nikolaev and transferred to Odessa at the end of winter, was by no means the best. As his colleague recalled, during the transfer of the battery, after examining all the property that was being transferred to him, her new commander ventured to stop the colonel in charge of the process with the question: “Where are the weapons, Mr. Colonel?”. To which he replied: "Oh, yes! Didn't they give you shovels and axes to dig cannons out of the ground? Here are your guns! ”- and pointed to the breech of the guns, which played the role of mooring bollards.

As a result, armed with the battery number 6 were four dug from the ground 24-pound guns, firing red-hot cores. But the command of the defense of Odessa did not worry about this. As Alexander Shchegolev himself recalled, “my bosses didn’t even think that the main purpose would be battery No. 6, both because it was removed from the right flank and went deep into the harbor, and because not only the old-timers, but also the captain of the port, Mr. Frolov, assured that the sea was in front of the battery in the outskirts of Peresyp so shallow that even military ships could not approach them with a cannon shot, losing sight of the fact that the enemy iron ships did not require a particularly large depth to reach the Practical (Military o) mola, - which was confirmed in practice. Therefore, on the eve of the bombing, the commander of the 5 artillery division and the head of the coastal batteries, Colonel Yanovsky, personally ordered me to transfer most of the charges to the battery number 5; I knew from the questions of the skippers I knew the approximate depth of the sea in my battery and in Peresyp, and therefore I asked what I would shoot, assuming also that the bombing would not be limited to one day - and therefore did not transfer a single charge, and did well, otherwise the day after a lot of 5 – 6 bursts of shots the battery would have been forced to shut up. ” 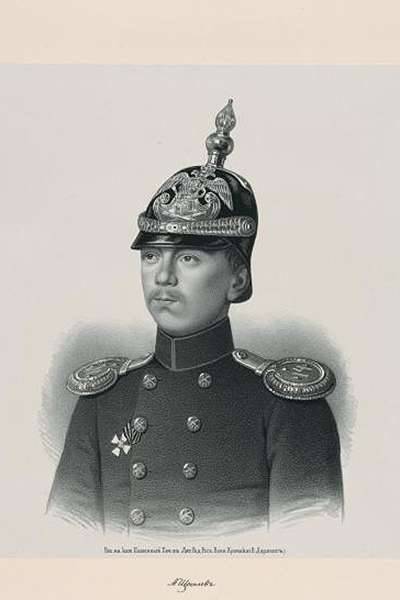 Alexander Petrovich Schegolev. Pencil drawing, 1860 year
Foresight Ensign Shchegolev justified the next day, when his battery was closest to the attacking squadron of four French and five British ships, early on Saturday morning 10 (22) on April 1854, which began shelling of Odessa and the landing. The attackers probably knew how small the enemy's forces were: four long ago outdated cannons and 30 personnel, of which only about a dozen were professional gunners, and the rest were infantry assisted. Plus, the battery number 3 under the command of Lieutenant Voloshinov, armed with dozens of the same 24-pounder guns and with the same composition of gun maids (and she could not seriously help Schegolev, because it was located further from the attacking ships). And they have - over 350 guns, and mostly 68- and 98-pound guns, quite modern, with a much greater range of fire. What is there to be afraid of!

And the fear was not the power of Russian guns, but the power of the Russian spirit. Scattered inaccurate volleys of British and French steam-frigates, trying to cover as much as possible, the battery of Ensign Shchegolev responded invariably with a meager, and therefore much more accurate counter-alert. To understand how effective the fire of outdated 6 battery guns was, it suffices to say that the attackers managed to silence the Russian guns only after six hours (!)! In this case, all the losses of Shchegolevs were eight dead and four guns, while the British and French had four ships set on fire or damaged, which had to be taken away from the battlefield in tow ...

Here is how the eyewitnesses described the finale of the heroic battle: “The fire quickly began to approach the charging boxes that could not be moved, since everything was already on fire ... And then only because of the inability to remain in the flame of a destroyed and burning battery surrounded by a common by fire on the mole, Schegolev decided to leave the number 6, - but for the last time he shot at the enemy. At that time, the flames grew so wide and spread over the entire tip of the Military Pier that most battery soldiers had to jump out through the embrasure and bypass the battery from the outside, under the very shots of the enemy. There was no other way out: everything was ablaze behind the battery. Shchegolev and his team, half-burned, exhausted to exhaustion, barely managed to move no more than fifteen steps from the battery, as the powder boxes exploded; - but, fortunately, while no one was hurt. As a result of this explosion, even in the city, far from the battery, a terrible concussion was felt (which we talked about above), especially in the cathedral, due to the area open on all sides. "Hourra, vive l'Empereur!" - rang out from the enemy steamers with an explosion on the battery. Shchegolev, having built a team to the front, with a drumbeat, went to the battery number 5, - according to this order in advance: to transfer people from a downed battery to the next one. Saken (cavalry general Dmitry Osten-Saken, commander of the defense. - RP), however, sent to invite Schegolev and his team to his boulevard. Here the baron kissed the young hero and congratulated the lower ranks who distinguished themselves on the battery with the cavaliers of the military order badge (St. George's Cross - RP). Shakolev, smoky, soiled, drenched in sweat, could hardly answer the questions of Saken: he was completely deaf from the thunder of guns and completely exhausted, not having any crumbs of bread in his mouth, not a drop of water from five o'clock in the morning, being in terrible physical and mental stress. Only a few rests, he gradually could come to the state to give short answers.

Three days later, on April 13, in an annex to the emergency issue of Odessa Herald, General Osten-Sacken’s order was announced that the battery number 6 would be restored and be given the name of Schegolevskaya. And so it happened: already in October, in a place that eyewitnesses in April described as “all burned and dug outside and inside, inside — ash, burnt logs, traces of bomb strikes, beaten wheels and gun carriages”, revived the battery, which covered itself with unfading glory. As monuments to the courage of its defenders, as witnesses wrote, “there were five huge cannons and an anchor from the frigate Tiger with the monograms of Queen Victoria”. This frigate was among those who attacked 10 (22) in Odessa on April, and 20 days later ran aground during a regular attack on the city; the crew surrendered to Russian sailors, and the ship itself was shot by coastal artillery.

The feat of ensign Alexander Shchegolev, a graduate of the Noble regiment who met his finest hour in part-time 21, was appreciated in Russia. Emperor Nicholas I ordered “in consideration of resplendent courage and self-sacrifice” to make Ensign Schegolev headquarters captain, that is, immediately after two ranks. In addition, he was awarded the Order of St. George, IV degree, and the sign was given to him by Tsarevich Alexander Nikolaevich (future emperor Alexander II). The heir accompanied his truly royal gift with a letter in which he wrote (the original spelling was preserved): “My dear Shchegolev! I am sending you the highest order for the production of you as lieutenants, lieutenants, and captains; a charter with a statute on the most graciously bestowed upon you on the Order of St. George and the Order itself. I also enclose the Cross of St. George from my chest; accept him as a gift from a grateful father to an honorable son. " And the Grand Dukes Nikolai, Alexander and Vladimir Alexandrovich, at their own expense, ordered and sent Shchegolev staff captain epaulets with the number "14" on the field, denoting the 14-th reserve art brigade in which he served.

The post-war fate of captain Alexander Shchegolev formed happily. He served until January 1889, managed to take part in the 1877 – 1878 Russian-Turkish war, then commanded the 1 grenadier artillery brigade and retired with the rank of major general and gentleman of several orders. And General Schegolev died in Moscow in the year of the outbreak of the First World War, which revealed to Russia the names of new heroes, quite worthy of the glorious act of the legendary defender of Odessa ...

Ctrl Enter
Noticed oshЫbku Highlight text and press. Ctrl + Enter
We are
The barbaric attack of the British on the Solovki monastery and the burning of CokeCrimean War: The Battle of Balaclava
Military Reviewin Yandex News
Military Reviewin Google News
24 comments
Information
Dear reader, to leave comments on the publication, you must sign in.