It remains to spit in the face

April 22 2016
126
Obama decided to visit a bit of "partners" in Saudi Arabia. The Arab monarchy, however, met him inhospitable, but had not spat in the face. At the airport, as is customary in the kingdom, a big man should be met by a big man - a representative of the royal family. Instead, they sent an official-business executive - the capital's governor. And, if at the time these Saudi kings embraced with overseas presidents (with Bush, for example), then Obama was simply given to hold his palm. Finally, on local TV they didn’t even show the story of Obama’s meeting with the king. 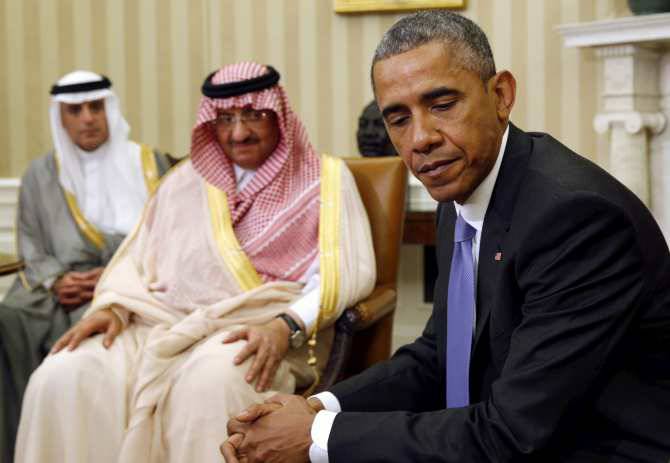 The US president arrived in the capital of Saudi Arabia on Wednesday, April 20. The plans of the Obama meeting with the king was listed Salman and participate in the summit of the Cooperation Council for the Arab States of the Gulf.

In hot Arabia rife political cold. At least, when Obama went down off the plane, through such a cold that Mr. President had flown to Pluto.

American journalists, including those from CNN, noticed all the details of the meeting. According to the press, the inhospitable reception that the royal family rendered to the overseas “hegemon” was staged to the smallest detail.

Firstly, at the gangway of the aircraft at the airport Mr. President met not a member of the ruling family, as is required by etiquette, and the governor of Riyadh. Of course, Obama knows who he has to meet. Humiliation was calculated.

Secondly, the king did not embrace the American, but only gave him his hand. However, the previous Saudi monarch met Bush was open arms, not to mention a smile. Against the background of the recent incident with Obama's hand in Cuba dismissive attitude toward the American president seems to have become the norm.

Thirdly, a private meeting of Obama and King Salman is not shown on local television. But the detail shown as the monarch warmly welcomed the other participants of the summit of Arab States.

Why are the Saudis officially "let down" Obama? The reasons for this - the car and a small truck.

Riyadh for several years evinces hostility towards Barack Obama, which, according to the Arabs, leads the wrong policy in regard to Iran and Syria.

“America, as the Arabs suspect, partially leaves the Middle East, and where it remains, it creates problems, but does not help to solve them. Arabs feel that Obama is ready to surrender his allies, as he did in relation to the former Egyptian President Hosni Mubarak ", - quoted "Vesti" Head of the Center for Asia and the Middle East of RISI Elena Suponina.

Among conspiracy theorists, we note there is an assumption that Saudi Arabia has brought down the price of oil on the world market for the destruction of the US shale competitors. Himself the move was not only economic but also political: Arabs avenged so Obama for his spineless and Syrian rejection of the invasion, the creation of a no-fly zone and the overthrow of Assad's Alawite.

In addition, the "lowering" of Mr. Obama is a hint to the future American president. Hillary Clinton is just a supporter of dispensation of the no-fly zone in the Syrian sky. True, with the current presence of Russian military forces in Syria, the establishment of such a zone is problematic.

There are quite fresh reason for Saudi coldness.

12 On April, US senators called on the president to publish some of the reports on the 9 / 11 attacks that were classified under Bush Jr. The bipartisan commission’s report was thirteen years old as published, but the last of his “for reasons of national security” chapter was classified by the Bush administration. Opinions have been expressed that it is about the Saudi trail in the 2001 attacks of the year. In particular, New York State Senator Kirsten Gillibrand and former Senator Bob Graham argue that Saudi Arabia “sponsored” the 2001 attacks of the year. The mentioned Graham in 2001-2002's. was a member of the commission of inquiry.

As stated by Mr. Graham, the classified chapter contains information about the involvement of Riyadh in the 9 / 11 attacks. Future militants flew to America, not knowing the language and not having flight experience. The money for flight school terrorists gave a Saudi, "agent" Omar al-Bayoumi.

The American press noted that the report was classified pages 28 because of the fact that the Bush administration did not want to complicate relations with the Saudis.

16 April Saudi Arabia, the White House has threatened to sell its assets in the United States in the amount of about $ 750 billion.. The reason for such a solution would be the adoption of the bill the US Congress to allow Saudi authorities bring to justice the slightest involvement in the terrorist attacks 9 / 11.

Recall that this bill (called “Justice against the patrons of terrorism”, aka “the Law 9 / 11”), in January 2016 was approved by the Senate Committee on Legislation and Judicial and Legal Issues. Discussions in the Senate and in the House of Representatives have not yet been.

As wrote the other day "New York Times"Back in March, Saudi Foreign Minister Adel Al-Jubeir personally delivered a message to the US Congress about possible kingdom responses. He warned parliamentarians that Riyadh would have to sell treasury securities and other US assets worth 750 billion dollars until the United States courts managed to freeze them.

According to the newspaper, the Saudi financial threat is another sign of the deterioration of relations between Riyadh and Washington.

19 April it became known, add a statement the White House spokesman Josh Ernest. Referring to the report of the Commission of Inquiry 9 / 11 terrorist attacks, he said that the US authorities have no evidence of the involvement of Saudi Arabia in the terrorist attacks 2001 years.

20 April Obama, who promised to block the bill the day before, flew to Riyadh. Despite the promised veto, the Arabs met the “hegemon” with chill, playing a whole performance. It must have been very difficult for the leader of the "exceptional" to endure diplomatic humiliation.

The interesting thing here is that the hotheads living near the Persian Gulf hardly thought about the response act of BH Obama's revenge. While there is discussion of the bill in the wards, and months are scrolling on the calendar, Mr. Obama can solemnly reassure the Saudis of the “veto” on the document. But, as soon as the bill is approved by the Republicans who are promoting it in Congress (the Democrats do not have a decisive majority in either the upper house or the lower one), Mr. Obama will get a handle and the future law will sign, remembering one unpleasant meeting in Riyadh.

750 billion dollars are noticeable even against the background of more than nineteen trillion American public debt. But the glorious tradition of spitting on debts took shape in the days of Clinton, for which the big warrior Bush began to actively “raise the ceiling of borrowing”. Of course, Mr. Obama or his militant successor H. Clinton will not just “raise the ceiling”. Somewhere will be raised, but somewhere omitted. Saudi Arabia, spitting in the face of the American president, will have to take either the hard way of Western sanctions, or become familiar with the ideas of the “Arab spring” and accelerated democratization. New orders will go to the American military industrial complex, and taxes will go to the US treasury. At the same time, oil will rise in price, which will make American producers happy.