What is wrong with Dagestan? Why is the republic in the lead in the number of reports of the National Anti-Terrorism Committee?

April 21 2016
109
From the reports of the National Anti-Terrorism Committee.


26th of January 2016
In the town of Andi in the Botlikh District of Dagestan, the militiamen blocked and then neutralized the gunman.

15 February 2016 year.
At the DPS post in Derbent (Dagestan), militants carried out an explosion of a car filled with explosives.

17 February 2016 year special forces of the FSB and the Ministry of Internal Affairs in the Suleiman-Stalsky district of Dagestan, during the counter-terrorist operation, neutralized two representatives of the gang.

March 11 2016 year.
During the special operation in the Khunzakh region of the Republic of Dagestan, two militants were neutralized.

March 17 2016 year.
Neutralized militants of the Dagestan village of Mutslaul had connections with the terrorist group ISIS.

13 April 2016 of the year.
In the suburbs of Makhachkala, the active phase of the counter-terrorist operation is underway.

14 April 2016 of the year.
The special operation against the militants in Gunibsky district of the Republic of Dagestan was completed. 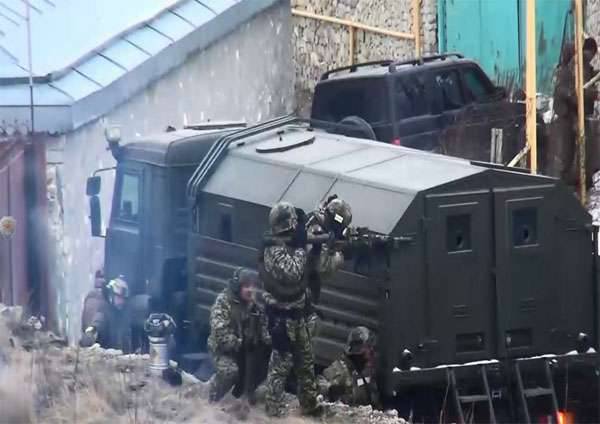 For incomplete 4 of the month 2016 of the year - eight reports from the NAC on the activity of the terrorist underground, who settled in the territory of the Republic of Dagestan. And it is precisely Dagestan that accounts for the largest process of introduced CTO regimes (counterterrorism operations) among all regions of Russia — more than 80%! It is necessary to note the courage and professionalism of law enforcement officers who are fighting against the terrorist plague on the territory of the republic. But the whole trouble is that whatever the level of this professionalism, if the situation with terrorism in Dagestan is not fundamentally changed, the risk for both the law enforcement officers and civilians by the gang members will continue to be prohibitive.

The main question is: what is wrong in Dagestan? .. Why are the mayors of the cities and the heads of the republic themselves changing, and the things that are called there now? Why has the terrorist underground in recent years been quite at ease in Dagestan, and why do law enforcement officers have to “kick the tail”, risking both their own lives and the lives of civilians?

On this occasion, we hear a lot of judgments, the most popular of which are the following: unsettled youth, high unemployment, unofficial clan system of governing the republic.

The unemployment rate in the Republic of Dagestan is really high. On average, it is almost twice as high as the average for Russia - about 10,8%. Among young people up to 27, he is 2,5-3 times higher. However, it cannot be said that the existing unemployment plan is the primary cause of the prevalence of terrorist and extremist ideology in the republic. According to Rosstat, the unemployment rate is comparable (or even higher) with Dagestan in a number of subjects of the Russian Federation, and not only the North Caucasus Federal District. Chechnya - about 16%. Ingushetia - more than 23%, Karachay-Cherkessia - more than 14. Kalmykia - about 10%, Trans-Baikal Territory - about 10%, Republic of Tyva - almost 12%, Republic of Altai - 9,9%, Karelia - more than 9.

The lack of youth as a component reason for a suitable soil for cultural sprouts is also yes. But again, is it possible to assume that all 100% of youth representatives are “engaged in circles and sections” (at workplaces) in other regions? Of course not. But only about permanent counter-terrorist operations in Altai or Karelia, thank God, there are no reports ... Three times through the left shoulder and a tuk-tuk on a tree.

Clan control system. This, of course, also as a variant of the reason for the rampant terrorism, but as if we do not live in Russia to blame on this issue solely on Dagestan. And as if we are not aware of the fact that in other Russian regions the control system is built, if not on frankly clan principles, then on something very close to them. Local princes, they even in Dagestan, even in the Moscow region local princes, and the desire of one to “rise” at the expense of another, as it happened, is quite an established practice, which will only cut the Gordian knot in our country.

So, unemployment, cronyism, unsettled a certain percentage of young people - some of the components of the causes of the Dagestan terrorist mosaic. But this is not its main elements, and certainly not the whole picture.

In Dagestan, in recent years, a situation has arisen where the nests of extremism have been disguised as certain charitable institutions, schools for working with young believers, and other cultural and educational centers. At the same time, the work on the training of those specialists who, when working with young people, would help its representatives to separate the wheat from the chaff, was actually failed. Against this background, all sorts of “bright preaching” centers that call themselves Islamic, but in reality have nothing in common with Islam, have become the norm for the republic. There is no control, the alternative is weak, and therefore the ground for expanding the influence of radicals and even with generous funding from abroad under the guise of the work of youth centers and non-political NGOs is suitable.

If in the same Chechnya, the Wahhabi sphere was actually wiped out with close cooperation of the republican authorities and local clergy, then in Dagestan, radicalization is far from being reduced to nil.

Little allocated funds from the state budget? Well, no ... Funds are allocated, and they are considerable. There is simply no system that now allows them to be implemented in the right direction. And building such a system is not a matter of one month. Not a matter of one year. This is a hard work that can last for many years. But the main thing is to start. And not in words.

Separate steps are still being taken. As an example, attempts to replace radical preachers with those who are ready to convey to the people the word of traditional Islam. Here are just these steps (as the well-known case of brewing a metal door in one of the Khasavyurt mosques shows) often turn out to be an elephant's gait in a china shop. Instead of targeted measures to reduce the level of influence of radical preachers on the same young people, the reason for the radicals suddenly comes out to rally even more and gain sympathy even from those who were previously neutral. Such steps may not hit on radicalism, but on the contrary - to encourage it. It seems that there is a goal - the fight against terrorism and extremism, but there is no clear plan. Or there is a plan, but even at the regional level, to put it mildly, it is incapable. In this case, there will be no excessive noise in the form of loud reports about how the police, again, brewed the door to the Salafi mosque. And it would have been better if they brewed good tea and sat at the table and thought about how, with the help of preventive measures, to deprive the real supporters of the emissaries of the terrorist cells without any fuss.

It is clear, from the side to judge oh how good ... But. If the work on blocking the financing channels of the terrorist underground (although in the case of Dagestan it is difficult to call the underground, they act almost openly, hiding behind faith) and surgical influences on growths in the form of “Koran interpreters” who returned from Turkey and Saudi Arabia if Daghestan will not continue, it will continue to appear in the reports of the NAC as a republic, “leading” by a large margin, no matter who is at the head of Dagestan.