April 19 2016
68
The Federal District “The Great Lakes”, the Federal District “The Great Plains” ... Why not? The bulky, bureaucratic and costly state structure in the US should be eliminated; such a territorial division is no good - either economically or politically. In addition, each state feels almost independent state. These plans are not speculations of an alternative press or the works of leisure conspiracy theorists who “exposed” the plans of the “world government”. The plan to remake the United States was published in the New York Times. 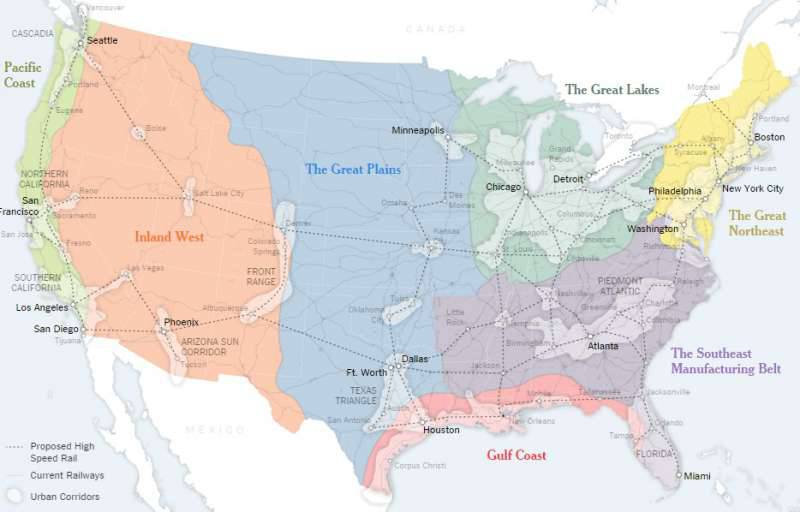 The author of the proposal on the new territorial division is well-known analyst and publicist of Indian origin, Parag Khanna. His big article on the American "federal districts" was published in an influential publication "New York Times" (under the heading "Opinion").

In the “thick of the American presidential primaries,” the author notes, it’s easy to see how the 50 states are increasingly diverging socially and economically. America is reorganizing around regional infrastructure lines and urban clusters that are ignored not only by the states themselves, but even by national borders. The problem is that such an economy is “not catching up” with politics.

America faces a two-part problem. If the countries with developed economies in Western Europe and Asia are oriented toward strong urban sectors where advanced industry is concentrated, then “American domestic policy, alas, remains committed to an outdated political structure.”

Today, states are preserved, and the country is economically and socially drifting towards freer urban and regional entities, "big cities and urban archipelagoes that promote global economic schemes."

For example, in the northeastern metropolis, stretching from Boston to Washington, more than 50 million people live. This territory gives 20 percent of US GDP. Greater Los Angeles gives more than 10% of GDP. And these "city-states" are much more important than most American states. The ability to "connect" to these urban clusters determines the long-term economic viability of Americans much more than the states in which they live.

Such a territorial “rearrangement” has profound economic consequences. America is increasingly divided not between the "red" and "blue" states, but between the centers in which industrial power is concentrated. Some parts of America are “connected” to this force, others are “disconnected” from it.

Bruce Katz from the Brookings Institute recently noted that the 350 of the main populated areas of America (cities with more than three million people) recovered from the financial crisis much better than small cities like Dayton, Ohio. There, the opposite is true: the crisis is growing stronger in the “disconnected” cities.

The problem is that, as long as economic reality goes on, the “fifty-model model” stands still. The 50-standard model means that federal and local resources are concentrated in the state capital (often a small isolated city). Other American cities "are increasingly cut off from the national agenda."

The United States needs to “return to a more flexible and wider way of thinking,” which was practiced in ancient times. It is necessary to rethink approaches to the “national function of the economy,” the analyst believes. But this can not be done to someone "alone."

The current Congress still thinks from the point of view of the states, and America needs a new map, the publicist is sure.

Creating new “regions” is not at all necessary: ​​they already exist on two levels. First, seven different superregions have already emerged, determined by the general economic and demographic situation (the Pacific coast and the Great Lakes). It is in these districts that the “new urban archipelagoes” are concentrated. Federal policy should be reoriented towards the emerging archipelagoes, and also sent to the aid of other archipelagoes (Minneapolis, Memphis). The new federal thinking will allow the formation of a network of progressive regions connected by improving automobile, railways and fiber optic cables, which will result in the emergence of a “united American city-state”.

Such shifts can be found not only in the United States, but throughout the world, the analyst is sure. For example, despite the millennial cultural traditions and differences in the provinces, China still overcomes its internal borders and is moving towards becoming an empire consisting of 26 mega-cities clusters with a population of up to 100 million each, centered around such nodes as Beijing, Shanghai , Guangzhou and Chongqing-Chengdu. Western countries - Italy, Britain - follow the Chinese example. So why not America to look at best practices?

We need to start with a simple one — not with the definition of “borders”, but with the identification of existing lines of infrastructure, supply chains and telecommunications, the most important routes, which will then allow us to determine the outlines of the emerging “superregions” and “new urban archipelagoes”.

And it's not just about federal politics. Current states should cooperate without borders. For example, Tennessee and Kentucky could join forces and become an advanced manufacturing center for the global automotive industry with appropriate cross-border infrastructure. If they can coordinate research and development at public and private universities, they will eventually be able to gain a competitive advantage.

Where possible, such planning should “jump over” international borders. Detroit’s population has dropped to below a million, but the Detroit-Windsor region is the largest border area of ​​the United States and Canada, home to nearly six million people (this is one of the largest border populations in the world). At the same time, both countries are deeply interdependent due to the automotive and metallurgical industries and will only benefit from joint expansion. The fate of Detroit seems almost obvious in this sense.

But in order for these scenarios to become possible, American thinking must go beyond the states. Today, Washington provides minimal support for regional economic efforts and strategies; tomorrow it will have to go much further, even at the risk of displeasing the established political balance between the states and the state.

The next American president will have to go beyond the usual framework and declare a serious policy of attracting new investments in infrastructure and support the shift towards a “new urban political economy” built around transport, engineering, alternative energy, digital technologies and other advanced industries.

Only “connecting” cities will allow the United States to win the “rope-dragging competition” that is conducted in global trade, investment and supply chains. Such an economic master plan will keep America as the world's leading superpower, Hanna believes.

Parag Hanna knows what he is saying, because the goal of the current president, the goal of the previous president and the goal of the future president of the United States is the same: to preserve America as the leading world superpower. But does the analyst really believe in a bright “regional” American future - with “districts” and “city-states”? Chasing "democracy" all over the world and relying on petrodollars, the United States put the policy cart ahead of the economy. The Detroit mentioned in the article just serves as an example of the impact of the global economy on the industrial American city.

Of course, some wise president could have made the USA a model of political modeling and a production paradise (in the meantime, China would have disappeared, and the Japanese would become impoverished), but only American rulers prefer to spend money not on “infrastructure”, but on hot and cold wars. It is the gratuitous spread of "democracy", they believe, that makes the American nation "exclusive."

Observed and commented on Oleg Chuvakin
- especially for topwar.ru
Ctrl Enter
Noticed oshЫbku Highlight text and press. Ctrl + Enter
We are
Results of the week. “The whole world is a theater, but the troupe is no good”Geopolitical mosaic: DPRK threatens enemies with a "special tool", and Mitt Romney caught up with Barack Obama
Military Reviewin Yandex News
Military Reviewin Google News
68 comments
Information
Dear reader, to leave comments on the publication, you must sign in.