April 18 2016
45
American analysts doubt that the US administration is doing the right thing, quadrupling the defense spending in Europe, explaining this spending by the need to contain Russia. Obama is blamed for actions that exclude a democratic public comment procedure. There is an opinion that “containment” will lead to endless confrontation, and even to war with the Russians. Maybe something will change after the new president came to power in the USA? Hardly, after all, all the candidates are the instigators of war. 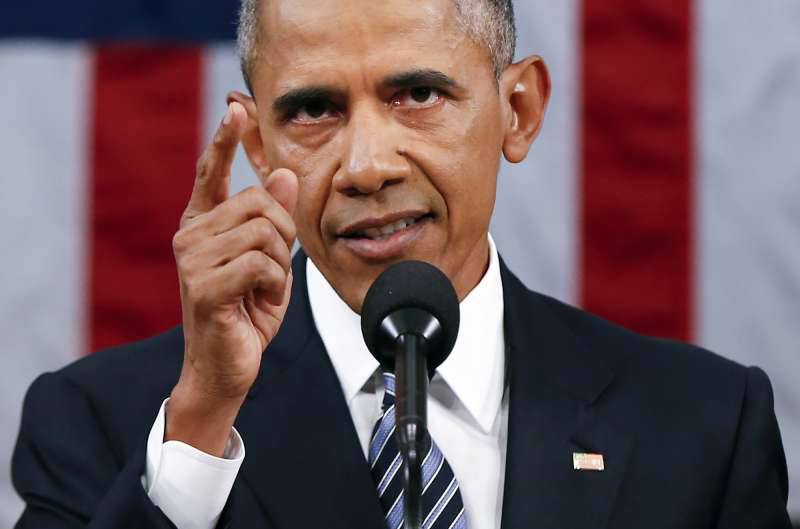 Jeffrey Tyler, publicist and contributing editor of Foreign Policy magazine, in the newspaper "Chicago Tribune" reflects on the “dangerous game” that Obama started, having chosen Putin as his opponent.

In February of this year, when a civil war was raging in Syria, and the “Islamic State” established itself in Libya, the White House announced its plans to allocate the defense budget to the 2017 fiscal year. These plans do not concern IG, but Europe. The amounts are called up to 3,4 billion dollars. Recently, the US Department of Defense specified its “defense” plans.

This includes the deployment of troops and heavy equipment in Romania, Hungary and the Baltic countries. Even the possibility of violation of the Russia-NATO 1997 Founding Act is taken into account.

The Obama administration has chosen the wrong time for such plans and statements. Today, attempts are being made to resolve the conflict in the "separatist" Donbas by implementing the Minsk agreements. Russia, badly affected by economic sanctions, has a clear desire to “reset” its relations with the West (in a fair sense of this concept, the publicist points out). Russian intervention in Syria was a pretext for restoring Moscow’s “battered status” on the world stage.

A senior White House official explained in Washington that defense spending and the deployment of military forces are a “long-term response to a changing security environment in Europe.” These plans reflect the "new situation." Russia has become an unpredictable player. In addition, the Pentagon considers Russia the main threat to US national security.

Of course, in response to the deployment of NATO forces, Russia announced that it would take "all necessary measures to protect [its] security." NATO Secretary General Jens Stoltenberg immediately accused Moscow of waving a “nuclear sword”, intimidating its neighbors and destabilizing the “European order” in the field of security.

NATO has already deployed some units in the Baltic states, and President Barack Obama visited the region, thereby confirming his support for the alliance. The very presence of NATO on the border with Russia is unprecedented; even at the height of the Cold War, there was no such thing. Today, Russian and American nuclear arsenals are “in full combat readiness”, and this, given the cooling of relations between Moscow and Washington, creates an especially dangerous situation.

The risk of an armed conflict between Russia and NATO is not only a hypothesis. Since the beginning of the Ukrainian crisis in 2014, Russia has repeatedly violated the airspace of NATO countries, the author writes. Simulated nuclear strikes on objects in Eastern Europe and even in Sweden. Large-scale military exercises were conducted, at which "the invasion of Scandinavia was practiced." “This is only an incomplete list of military maneuvers,” the publicist points out, “which, apparently, are intended to give one clear signal to NATO: Russia has returned!”

However, when assessing Russia's actions, the analyst continues, a lot depends on how you look at the actions of the Kremlin. The author believes that Putin does not come, but only "reacts", as evidenced by the events in the Crimea and the flight of Yanukovych ("which happened five days before the invasion"). And note, Putin expresses hope for constructive relations with the West. At the same time, he could not “sit and watch how Ukraine slips out of Russia's orbit”: after all, the Black Sea is strategically important for Russia, and the well-known port should not fall into the hands of NATO.

More than 20 years ago, George Kennan, the architect of the American containment policy toward the USSR, warned that the admission to NATO of the former Warsaw Pact countries (not to mention the former Soviet republics, the Baltic countries) would provoke a “new cold war,” which is likely to end in a hot and it will put an end to efforts to build a workable democracy in Russia. ”

This view seems to be confirmed by Putin’s reaction to the formation of the “political axis” of Kiev and the West, culminating in the “euromaidan”. Of course, Ukraine will not be taken to NATO neither in the near future, nor ever, but NATO promised that one day it will be taken.

There is reason to believe that the Ukrainian crisis can still be resolved. Kissinger and Brzezinski had previously offered a deal with Russia: in exchange for the official non-admission of Ukraine to NATO, Russia allows Kiev to go "its own way" in non-military areas (which may include EU membership). Such a mechanism could be ratified at a summit in which the United States and Russia would participate.

But with the Crimea more difficult. Even if a new referendum on the status of the peninsula is held under UN control, but the return of this territory to Ukraine "seems unlikely." This is already clear from the survey results: they show that about 80% of Crimeans prefer to stay in Russia.

What do the US and its allies need to do? They must "give in", give up their desires and "be ready to lift the sanctions and normalize relations with Moscow."

The West and Russia should unite efforts in the fight against a serious and growing threat from Islamist terrorism, and also direct efforts to solve the problem of refugees. And the recent visit of US Secretary of State John Kerry to Moscow shows that Western and Russian interests converge here: the parties want to stop the Syrian war and stop the "Islamic State". And no one wants a new world war.

Building the United States four times the cost of "defense" in Europe (to "contain" Russia) removes funds from operations in Syria, Iraq and Afghanistan. The Obama administration is setting the stage for “endless confrontation, and perhaps even for war with Russia,” and shy away from public discussion of this topic, the author believes.

Potential presidential candidates from both parties behave aggressively, while others are already ready to "give Putin the nose." But this kind of bravado leads nowhere. The policy of sanctions does not lead to anything either: Putin’s support in Russia is high, his rating remains at more than 80 percent. And if this is the US policy aimed at "scrapping" Russia, then it "does not work." A new approach to relations with Moscow is urgently needed, the analyst believes. "Too much at stake."

Dan Sanchez on site Antiwar.com enumerates potential candidates for the presidency of the United States and finds none that could lead the country to a peaceful foreign policy.

Many are afraid of Hillary Clinton. And it’s hard to argue with them: this lady is the “midwife” of a multitude of disasters, chaos and bloodshed. Many pacifist-minded citizens, especially of the left wing, are ready to vote for Bernie Sanders.

Others criticize the neo-cons who have seized power. And this is also true. The roots of the current disastrous policy of the United States go back to the era of President Clinton, which logically resulted in the military actions of the neo-conservative Bush administration aimed at the redivision of the Greater Middle East.

Many people with right-wing anti-war beliefs are looking for salvation in the figure of Donald Trump: they say he will stop the policies of the neo-cons.

But Dan Sanchez doesn't believe anybody.

Mr. Sanders is a supporter of a moderate interventionist foreign policy. Well, you need to vote for him simply because the nightmarish Clinton does not break into power?

As for Trump, he, if you look closely, is a much bigger “hawk” than many other Republicans. Listen to him when it comes to torture, state security and civilian casualties. Or about the blood that is spilled for oil. Can such a person really become the “champion of the anti-war movement against the neoconservatives”?

What to do? How to stop these instigators of war?

Dan Sanchez believes that it is necessary to focus public attention on politicians. Public opinion should be turned against real hostilities, thereby diverting the attention of society from certain obsessive ideas, from the election campaign theater, from this political wrestling.

Yes, the clique eager for military blood may go to power, but the new administration of the White House will not be able to rule in a vacuum. All regimes should strive to preserve legitimacy, the author recalls. And no regime can afford to blatantly ignore the spirit of the times. The new president may receive his post by "majority vote." But if “only a small part” of the inhabitants of the country vote for him, his mandate will not be full-fledged.

And if it turns out that most of the public who did not vote is opposed to the war, this will especially reduce the potential of the president’s foreign policy. Faced with the fact that a significant part of society "irreconcilably opposes war," even the most "militaristic president" will be limited in its actions, and, perhaps, even retreat from its undertakings. Even Richard Nixon had to end the war when the people demanded it.

The fewer people on the election day will line up for voting, preparing to “obediently choose” between the new “emperors”, and the more people will “defiantly blame the empire itself”, the better the prospects for world peace will be.

In the United States, there is not a single presidential candidate who would really be able to put an end to the White House’s aspiration to “contain” Russia instead of fighting real enemies of terror. And none of the claimants for the throne in the White House is in the full sense of the word a pacifist, no matter what he promised.

The policy of the outgoing administration of B.H. Obama is preparing for the new president an arena for the endless confrontation of the USA with Russia, a field for a new cold war, which may well turn into a hot one. And today, even those who believe in Russia's modeling of “nuclear strikes on Eastern European objects” and practicing the “invasion of Scandinavia” exercises consider Obama’s foreign policy a threat to world peace and urge Washington to “give up”, lift sanctions and normalize relations with Moscow .

Ctrl Enter
Noticed oshЫbku Highlight text and press. Ctrl + Enter
We are
Results of the week. “Why is the war going on? Do they not read newspapers? ”In 2011, Russia will confidently retain the second place in the ranking of the world's largest suppliers of weapons
Military Reviewin Yandex News
Military Reviewin Google News
45 comments
Information
Dear reader, to leave comments on the publication, you must sign in.