Lithuania vs Belarus - a simulation of innocence 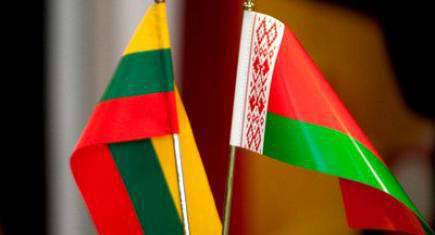 Lithuania and Belarus are not just neighbors - they are connected by one историяfrom the time of the Grand Duchy of Lithuania to the USSR. That is why fraternal peoples who have been united for centuries, strive to maintain, at least on a simple human level, good-neighborly and kinship relations.


Unfortunately, in these relations, as always, some politicians and individual Lithuanian figures who have an ambiguous attitude towards everything that was once connected with the USSR are trying to “stick their nose”. Today, they successfully manipulate the media and other organizations that are called upon to deal with the information BUNCH (pseudo-utopian confabulation) and are a wonderful tool in the hands of the ruling elites who fulfill the will of the well-known customer.

It would seem that the meetings of the foreign ministers, chiefs of staff of the armed forces of Lithuania and Belarus, etc., at which an agreement was reached on strengthening cooperation and good neighborliness between the two countries, should have shown openness and constructive interaction on all issues.

However, it’s too early to talk about openness and good-neighborliness. Otherwise, how can one explain some of the statements of high-ranking Lithuanian officials who form a negative opinion among the local population in relation to the neighboring countries.

Thus, for a long time, the Lithuanian State Security Department (DGB), apparently justifying its existence, reprimanded the “spy scandal” with a paramedic of the Lithuanian armed forces and an employee of Oro navigacija, information about which with enviable regularity was thrown into the Lithuanian media, thereby constantly reminding the local population about this.

It is also surprising that the media, for unknown reasons, present the same information in different languages ​​in different ways.

Here we should note the statement made by the Chairman of the Committee on National Security and Defense of the Lithuanian Seimas, A. Paulauskas, made at the end of March 2016 after the meeting in the State Security Committee. He highlighted the presence of threats to regional and global security from Russia and ... Belarus. At the same time, on the Delfi website in the corresponding publication in Lithuanian “Didžiausia grėsme Lietuvai vis dar išlieka kaimynės” (the greatest threat to Lithuania is still the neighbors) the countries were noted. At the same time, the above-mentioned countries were not mentioned at all in Russian in the article “Paulauskas: unfriendly neighbors are more dangerous for Lithuania than terrorism”: “As a more serious threat, the threat to regional security is highlighted, that is, a global threat from states that are unfriendly and who are around us. They represent the greatest threat to us today, ”he said.

Also, what is worth only the ridiculous statement of the same Paulauskas about enemy saboteurs who landed on the Lithuanian coast, who are now walking around the territory of free Lithuania, and the authorities responsible for the security of the country do not even know about the "invasion". Moreover, it turns out that the activity of the Russian and Belarusian UAVs has almost increased in almost the territory of Lithuania!

Where are the official confirmation of allegations? As they say, the facts in the studio!

And after that, the head of the Radio and Television Commission, Edmundas Vaitiekūnas, states that in Lithuania “the number of propaganda and incitement of discord has decreased, citing various mass media that are being transferred to the category of“ non-free access ”.

The question arises, what measures does Lithuania take on its own propaganda, lies, incitement to hatred and hatred both within Lithuanian society and in relation to neighboring countries?

To date, such statements and related press reports by representatives of the Lithuanian authorities clearly underline the unfriendly attitude towards the neighboring countries.

It is obvious that the country has been experiencing a crisis of power for a long time. After all, even in the summer of 2014, Paulauskas, criticizing the Lithuanian president, said that there was no foreign policy strategy in the country and that we should talk about good relations with our neighbors and economic stability.

Ctrl Enter
Noticed oshЫbku Highlight text and press. Ctrl + Enter
We are
The agony of Lithuanian RussophobesHow can Russia survive and win in the 21st century?
Military Reviewin Yandex News
Military Reviewin Google News
58 comments
Information
Dear reader, to leave comments on the publication, you must sign in.