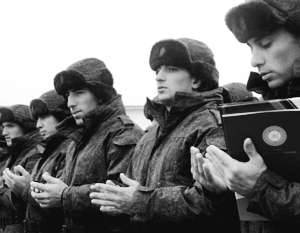 The refuted reports about the cancellation of the spring draft in the army on the territory of Chechnya drew attention to the special situation of this republic. Indeed, although Chechnya is, in the full sense of the word, a part of Russia, the consequences of its actual separation in the 90 and the two wars do not so easily pass. Everything takes time - and therefore the return to the recruitment of Chechens in the army is going very carefully.


In the course of the spring conscription now in progress, a little more than 150 thousand people will be drafted into the Russian army. This is quite a bit - about one tenth of a percent of the population.

The current army is already very different from the one that was ten years ago - there were more contract soldiers, both military training and conditions of service improved, and now they are only calling for a year. There are no more problems with the appeal - moreover, in a number of Caucasian republics, they are ready to give bribes for the right to serve.

At the same time, they call from the North Caucasus even a little less than it is supposed to by quota. With a population of about seven percent of the national, in the current call from the North Caucasus Federal District will be recruited less than eight thousand recruits - that is, about five percent of the total number of recruits. And for sure two thirds of them will be in the three millionth Stavropol Territory. That is, the six national republics with their seven million population will remain well if three thousand recruits. Dagestan, the largest of the national republics, has already announced that it will put up about 1800 people, and in Chechnya they even said that this year there will be no conscription.

However, the statement by the Chechen military commissioner Ahmed Geyrkhanov, which appeared on Monday, that the republic will miss the spring draft, because “recruits” are being drafted - “after all, the Chechens were not in the army for almost a quarter of a century” were denied the next day. First, General Vasily Tonkoshkurov, head of the General Organization and Mobilization Directorate of the General Staff, stated that the information about the cancellation of the spring draft in the Armed Forces in Chechnya is incorrect, and said that a 355 man had already been called, and then Jeyrkhanov himself said that the draft campaign was under way, “ 500 people we already serve, we are preparing the following. The guys are undergoing a medical examination, selection and registration of young people is underway. ”

In principle, there is no particular contradiction here - it seems that this spring five hundred people will call from Chechnya, that for a million republic there is a drop in the ocean. However, if we compare it with the more crowded Dagestan, it turns out that the Chechens and Dagestanis are called in approximately the same proportion. Another thing is that Dagestan’s quota has doubled in two years, while in Chechnya it does not grow - but the problem, of course, is much wider. Calling residents of the Caucasian republics to the Russian army is a serious and heated question. There are several reasons for this.

First, the Chechen war and the preceding years of the self-proclaimed independence of Chechnya.

Chechens were not called up since 1992, and when a few dozen people were deployed to a sporting center stationed in Moscow as an experiment in 2001 in the territory that had just been returned to federal control, this ended in clashes on national soil. Since then, Chechens have not been called to serve in the Russian army - which did not prevent thousands of Chechen residents, including from among former militants, from serving in the internal troops, structures of the Interior Ministry or under contract. But on the territory of Chechnya itself - where they fought, destroying the armed underground.

In 2014, Ramzan Kadyrov demanded to publicly explain the reasons for the refusal of conscription in Chechnya - and in the same autumn the first conscripts were sent to various parts of the Armed Forces. They were all 500 people - despite the fact that, as it was already then stated in the republic, “there was an accumulation of a draft resource”, which they estimated at 80 thousand people.

If there is so much in Chechnya, then in Dagestan it is even more - only in this call 15 thousands will be called up for the first time. But it is also very difficult to get into the army from Dagestan - the call from the republic was sharply reduced several years ago: from 8000 to 800 people in 2013 year.

The cause of steel ethnic problems in parts. In the zero years, Dagestan conscripts formed compatriots, and conflicts between them and the rest of the military became more and more frequent.

This is the second explanation of why the Russian army became less and less Caucasian. To avoid problems with the diasporas, it was decided to reduce the number of draftees from the North Caucasus. Photos of the bullying of some “Dagas” over their colleagues were on the social network, which threatened to seriously aggravate the already difficult inter-ethnic relations not just in the army, but in society as a whole.

On the other hand, the cessation or strong reduction of the call of the highlanders could not be eternal. It was forced and justified, but it was temporary. Why?

Because Caucasians, as full-fledged Russian citizens, should serve, especially since they themselves want it very much. Several thousand Caucasians left to fight on the side of the "Islamic caliphate" - and, apart from purely religious propaganda, the choice of the "path of jihad" was certainly influenced by the fact that they were not included in the general Russian context and were not really familiar with the Russians.

Returning the call, it is unwise and harmful to create national parts. Especially now, when the memories of the Chechen war are still very fresh, and the radical Islamist underground is trying to conduct Russophobic propaganda among Caucasian youth. With the exception of Chechnya, where the creation of national units within the Ministry of Internal Affairs was justified by the special status of the post-war and living republic under the counter-terrorist operation and, most importantly, it was in fact for many who fought against Russia a form of transition to the side of Moscow, nowhere else does this exist.

Moreover, now, after the creation of the National Guard, the number of Chechen security officials will be reduced and their command will be concentrated more in Moscow than in Grozny. It does not carry any threat of destabilizing the situation in Chechnya. Chechens, like no one, respect force and understand that both the state and the authorities in Russia will become stronger, and nothing threatens their national structure.

The call from Chechnya and Dagestan will need to be carefully increased - but in such a way as to prevent the formation of compatriots in those parts where conscripts are sent. As in the Soviet years, Chechens and Dagestanis alone will serve in different parts of the country, in different types of troops - and just through the service they will feel pride not only for their small homeland, but for the whole big country.

They will not chop up - yes, there is no such goal - but they can become true patriots of Russia. Like, for example, the current head of Ingushetia, Yevkurov, a military officer of the GRU and the hero of the "throw on Pristina" in 1999. In addition to the conscription service, the recruitment of the highlanders in the cadet corps and military schools, in the structure of the Rosguards will also increase.

And it is from their ranks that a new elite of the North Caucasian republics will gradually be formed - serving, officer, non-corrupt, able to put the interests of the country above the interests of their teip and clan. To fully incorporate the Caucasus into Russia, to prevent the formation of an abyss between this region and the rest of the country, the Russian army is needed again - this time as a forge of personnel.