April 14 2016
27
Recently, it was not heard that President Putin flew to Europe to meet with someone. Now, at the time of the sanctions, everything happens in a different order: they fly from Europe to Putin. This is the order of things, if we are not mistaken, in the United States they are considered “isolation of Russia”. 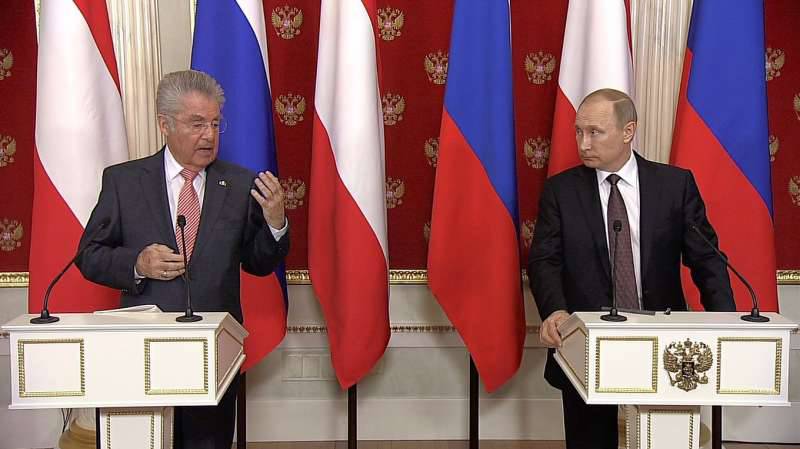 Recently, the President of Austria Heinz Fischer visited the Kremlin on a business trip. He boldly criticized anti-Russian sanctions, and then criticized Turkish policy. In addition, the Kremlin talked about the Nord Stream - 2 gas pipeline project, investment and trade, which, alas, is declining.

Herr Fischer’s visit to Russia turned out to be the third in twelve years of the presidential term. In total, Putin and Fisher have officially held seven meetings in recent years. One of them, related to the discussion of the South Stream project, which was subsequently canceled, took place in June 2014, when President Putin visited Vienna.

In Austria, the election of the head of state will soon take place, and the president will be replaced there. Western analysts are talking about the political legacy that will get the new leader of the state. Apparently, it was not without reason that Fisher decided to visit Russia in the last weeks of his reign.

On April 6, the Austrian Federal President met in Moscow with the Chairman of the State Duma Sergey Naryshkin. At this meeting, he stated that he supported the lifting of sanctions against Russia and advocated a corresponding position within the European Union.

"This topic [anti-Russian sanctions] also worries us," quotes Fisher. "Vedomosti". “I am ready to answer this at once: I always frankly say in any place that sanctions are something that is unprofitable for both parties.”

According to him, it is necessary to find "such a common way for all of us, to develop it, which would lead in the near future to the lifting of most of these sanctions, overcoming these sanctions."

In addition, at a meeting with the Chairman of the State Duma, Herr Fisher welcomed the release of Palmyra from terrorists, Alexey Pushkov, head of the Duma’s international affairs committee, told reporters.

"He very definitely welcomed the liberation of Palmyra, said that this was a great event that caused a huge political echo in Austria," said the parliamentarian TASS.

On the talks between Vladimir Putin and Heinz Fisher told "First channel".

As the presidents noted, relations between Russia and Austria are experiencing some difficulties. Nevertheless, the parties intend to continue cooperation. Frank, constructive, thorough - these are the definitions with which the Russian leader appreciated the dialogue with his Austrian counterpart.

Recently, bilateral trade is in decline, Vladimir Putin said in a conversation.

“Relations between Russia and Austria, despite all the difficulties that we have been facing lately, are developing and are of great importance for us,” the First Channel quotes the President of Russia. - We have always paid special attention to our trade and economic relations. Unfortunately, we have a significant decrease in turnover, by about 25%. Although Russian exports to Austria, oddly enough, a little, but still grew over the past year. "

The Russian leader did not mention the sanctions. Moreover, it is known that in this case Austrian companies suffer from restrictive measures.

Fisher did not hide his concerns about this: “Those who are interested in developing good economic relations between Europe and Russia will not be happy with the existence of sanctions. But I must note that Austria is a loyal member of the European Union and, as a loyal member of the European Union, in which it wants to stay, it must adhere to the decisions that have been taken with respect to Russia. And here the solution to these problems is the Minsk process. ”

As for the Nord Stream - 2, Putin said: “I will note the agreement reached last year between Gazprom and the OMV concern on participation in the implementation of the Nord Stream - 2 project, as well as the conclusion of an agreement on joint development of the Urengoy oil and gas field. 1 April this year in St. Petersburg, the companies signed a number of new documents, in particular, on the supply of oil and scientific and technical cooperation. Another significant project is the creation of an underground gas storage facility in Austria with the participation of Gazpromexport, the second largest in Europe in terms of active gas storage. ”

Also, Channel One notes that, in memory of those killed in World War II, Heinz Fischer laid wreaths at the Tomb of the Unknown Soldier near the Kremlin wall.

“Heinz Fischer arrived in Moscow at the invitation of Vladimir Putin and brought with him a representative delegation of ministers and the military. Europeans prepared thoroughly and did not waste time in vain: in one day they managed to discuss a wide range of problems - from joint turnover to the quality of their meat products, ”said Tatyana Melikyan ("Lenta.ru").

While Herr Fisher laid flowers at the Tomb of the Unknown Soldier (this item is usually not in the program of foreign leaders), Chief of the Austrian General Staff Lieutenant-General Otmar Kommenda apologized to his Russian colleague, Army General Valery Gerasimov, notes Melikyan.

“Unfortunately, due to the development of the situation in Europe in recent years, it was not possible to invite Mr. General to Austria. We feel guilty about it. I really hope that with our help the situation will improve, and your visit will take place in the coming years, ”Commenda told Gerasimov. He clarified that one of the reasons for his visit to Moscow was the reluctance to follow “someone's orders”: “I am not going to obey someone's orders — who to communicate with, and who not to communicate with. That is why I wanted to visit you. ”

According to the head of the Austrian agrarian department, which Lenta cites, agriculture of the European Union as a whole and Austria in particular turned out to be one of the sectors most affected by sanctions. The share of exports in the agricultural sector of Austria alone declined by 50%.

“Of course, we are very interested in re-establishing relations with Russia. The purpose of the visit of President Heinz Fischer to Moscow is primarily to prepare us for cooperation after the lifting of the embargo, ”the minister said. Moreover, Austria has already asked Rosselkhoznadzor to test its meat products in order to start exporting to Russia immediately after the lifting of sanctions.

Recall that by the end of July 2016, the EU states will decide whether to extend the restrictive measures against Russia. The decision will show how the EU countries depend on the will of the overseas hegemon, on whose “orders” the sanctions were “amicably” introduced after the “annexation of the Crimea”.

By the way, 2017 year will be the cross year of tourism in Russia and Austria. “We have big joint plans in such an important area as humanitarian and cultural ties,” the television channel quoted V. Putin. "Culture". “This year, in Vienna, a large-scale festival“ Feel Russia ”will take place, and in 2017, taking into account the success of the seasons of Russian culture in Austria, we will hold cross years of tourism. The opening of a tourist office in Vienna in the fall of this year will also contribute to the growth in the number of Austrian tourists in Russia. ”

Observed and commented on Oleg Chuvakin
- especially for topwar.ru
Ctrl Enter
Noticed oshЫbku Highlight text and press. Ctrl + Enter
We are
The head of the DPR visited Gorlovka, the cadets took the oath, and in the "Olympic" hosted the forum "Donetsk Republic"Stubborn Miller will build the "South"
Military Reviewin Yandex News
Military Reviewin Google News
27 comments
Information
Dear reader, to leave comments on the publication, you must sign in.