Project "ZZ". Putin and his agent in a skirt

April 13 2016
73
A figure of Putin appeared in the wax museum near Belgrade. It is adjacent to the figures of Milosevic and Tito and is installed near the flag of the Communist Party of Yugoslavia. The press reports that 75% Serbian citizens "respect Putin and Russia." Against this background news on respect for the Minister of Foreign Affairs of Germany Frank-Walter Steinmeier called for the return of Russia to the G-8. Meanwhile, the famous Anna Chapman, “an 007 agent in a skirt,” revived: now through Instagram, changing skirts, she makes fun of David Cameron from London because of the Panamanian offshore scandal, and in America he approves of Donald Trump: he will get along with Putin. 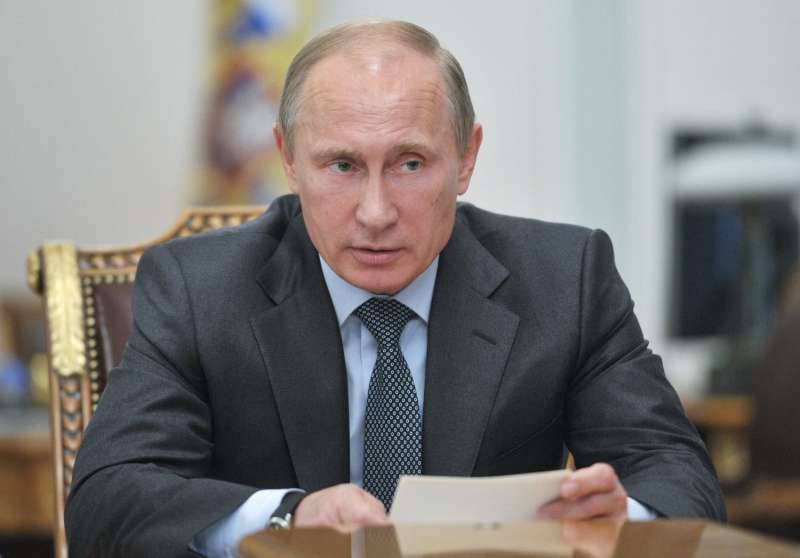 Bloomberg spoke about the wax figure of Comrade Putin, which appeared in the Serbian Museum of wax figures in Serbia.

The museum is located in the town of Yagodina, an hour's drive from Belgrade, on a busy street where there are open-air cafes and clothing stores. For two months Serbian artists “worked day and night”, creating the image of Vladimir Putin.

The figure is on a par with the flag of the Communist Party of Yugoslavia and the figures of Milosevic and Broz Tito.

“Almost 75 percent of Serbian citizens respect Putin and Russia, so we allowed Putin to become the first foreigner here,” said Dragan Markovic Palma, mayor of the city of Yagodina.

There is a campaign in the country. 24 April - parliamentary elections. The "application" by Prime Minister Vucic for preparing the country for membership in the European Union today is facing a move towards nationalism, journalists say. The old friendship with Russia is returning, the resentment towards the West does not subside due to the “bloody collapse” of Yugoslavia.

More than two decades have passed since the "fall of communism," the authors of the article remind, but now Russia is again "courting the countries over which it once dominated."

In Hungary, Prime Minister Viktor Orban made a “nuclear deal” worth $ 11 billion with the Russians and is trying to “imitate Putin’s model” - “illiberal democracy.”

Czech President Milos Zeman and Slovak Prime Minister Robert Fico argue that relations with the EU should not harm Russia.

In Serbia, only 11 percent of voters agree that the state’s accession to the EU and NATO (as you know, NATO members bombed Serbs twice in 1990s) is good, while 72 percent think the opposite (April data from 10, conducted by B92 and the Center for Free Elections and Democracy). In addition, 8 from 18 parties participating in parliamentary elections are pro-Russian.

German Foreign Minister Frank-Walter Steinmeier also demonstrated pro-Russian sentiments. He (not for the first time) spoke in favor of returning Russia to the G8.

He writes about it Deutsche Welle.

Frank-Walter Steinmeier again called for the inclusion of Russia in G8. “I would like to wish that the G7 format does not remain for a long time, but that we create the conditions for a return to G8,” he said before the meeting of the foreign ministers of the G-7 countries in Hiroshima.

In June, 2015 of the year, recalls Deutsche Welle, Herr Steinmeier said that the West could not ignore Russia's violation of international law, but was not interested in “having G8 forever become G7”.

Later, in November, the minister named two conditions for the return of Moscow to G8: Russia's participation in resolving the Ukrainian conflict and in the fight against terrorists in Syria.

The influence on geopolitics is also exerted by “spies”.

Reporter will stewart in "Daily Mail" spoke about the new political task of Anna Chapman.

"The 007 agent in a skirt" was previously exposed by the FBI and deported from the US, reminds the journalist. But now she is “returning with a new mission”: attacking Western governments through Instagram.

Whenever she speaks with a new network attack, she demonstrates a new outfit. In one dress, she "bombed" David Cameron, who was implicated in the Panama Papers scandal, in the other she attacks Hillary Clinton and supports Donald Trump.

In a red dress, Chapman says that Western journalists have caused an offshore scandal to attack Putin, but David Cameron has been hit. And his family, involved in tax evasion, justifies a whole week.

In the opinion of the Moscow reporter for the British edition, Anna is now engaged in the production of “regular and meaningful” texts aimed at “supporting Putin and his government.”

A 34-year-old agent with a flame-colored haircut and a blue dress writes that Donald Trump is suitable for the White House because he "gets along with Putin." But Hillary Clinton is not suitable, because the former mayor of New York Rudolph Giuliani accused her of creating the "Islamic State", and it is difficult to argue with him. Since the days of Reagan, Washington has only been busy creating conditions for the appearance of terrorists. As historical examples are the Taliban and Al-Qaeda. "Apparently, this is the main fun for US presidents: to pave the way for terrorists, and then fight them for years."

The journalist writes further that Mrs. Chapman had given birth to her first child, a son, in the summer of 2015. Who is the father of the child? This she does not disclose.

Will Stewart makes some hints, stating that Anna is now working on the Russian TV channel Ren-TV, which is owned by the National Media Group, headed not by anyone, but by 32-year-old former gymnast Alina Kabayeva ("according to rumors, a secret friend Putin's ").

By the way, Anna has Instagramme already 1196 subscribers.

Around Putin. And now his secret children, who are transparent (or opaque, whatever you like) are hinted at by a British journalist. Apparently, the throne will be inherited, and Russia will always be ruled by the dynasty of crowned Putin. In the West, the last doubts on this score disappeared. Cameron and Obama are changing, Tsar Vladimir remains. Putin will never run out, and they never sit down battery. They are like a perpetual motion machine.

German Minister Steinmeier captures the essence of the truth: the West should accept the eternal Putin. Finally agree with the Russian Crimea and return Russia to G8. And this is the least that Europe should start with. And then what? Read "Military Review"!