April 13 2016
63
Fashion on plots of military occupation in the context of alternative stories continues to shake the world of cinema. At first, viewers of cinemas were shocked by a terrifying remake of “Red Dawn”, and then television was brought up. The Norwegian series "Occupied" turned out to be frankly mediocre, even by the standards of unassuming Scandinavians. The American film version of “The Man in the High Castle” was only slightly better. If we recall the world of animation and computer games, then there such scenes are more common. Either the Axis countries or the bad Russians usually act as occupiers, the latter being much more frequent. 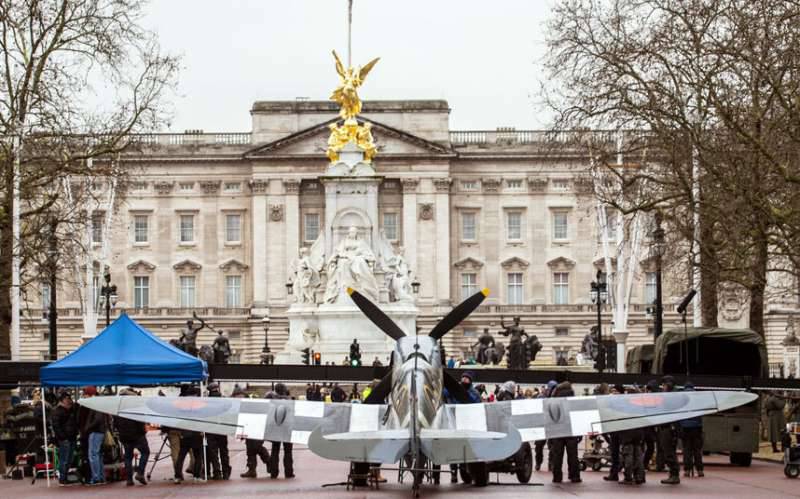 But British cinematographers decided to outdo everyone: in their new creation, the occupiers are Nazi Germany and the Soviet Union. We are talking about the series, the shooting of which is now taking place in the United Kingdom. The plot is based on Lena Dayton's eponymous novel "SS-GB". So far, in Russia, the novelty has hardly been noticed, in any case, there is a vanishingly little mention of it in the media. The end of filming will take place in 2016 year. Date of the premiere has not yet been determined. The photographs leaked to the network from the set show extras in German and Soviet form.

The background is as follows. The famous "Sea Lion" was implemented in 1940 year, and the German troops landed on the beaches of England, whose cities capitulate one by one, without resistance. Churchill was executed, King George VI was imprisoned in the Tower, and Queen Elizabeth fled with her daughters to New Zealand. The Baltic Fleet of the USSR arrives at the shores of Scotland and settles in Rosaite, Scapa Flow and Invergordone. The creators promise us a political detective story, but historians can tear their hair out beforehand, for it is obvious that there will not be any serious connection with the real facts here. 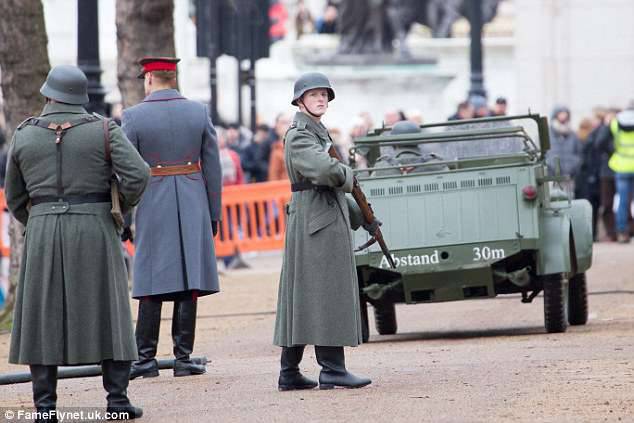 On rare frames, "Russian officers" are already noticeable among the Nazis.

Why did such plots suddenly become popular? The main reasons, perhaps, are three. One is purely creative. The other two are political.

First, the viewer became fastidious. For decades, the development of mass cinema, he saw on the screen almost everything: from invasions of newcomers of all stripes to crime and debauchery in the stone jungle of big cities. Come up with something new, the original has become extremely difficult. Therefore, film bosses decided to try something that combines scale and relative lack of desire. The plot of foreign occupation in the genre of alternative history in this plan unexpectedly turned out to be a winning 100%. It is precisely the fiction of events that not only opens up space for scriptwriters (as a rule, is not familiar with history), but also ensures that the feelings of tender Americans or Europeans will not be hurt. This is fiction, right?

Secondly, a clearly political order for bad Russians. It began long before the Crimea and even long before Putin. Anti-Russian agitation quite successfully riveted the West during the reign of Yeltsin. Examples can even lead without getting into the search on the network. Then our liberal political and filmmakers explained it simply. They say that the Russian film and television market is too small, and in the United States, on the basis of this, they make stories without taking into account the feelings and desires of our audience. But, they urged, when our market becomes large enough, foreign (primarily American) producers will have to take into account the feelings of our consumers and not just stop stamping frankly Russophobic things, but also introduce a new pleiad of Russian-speaking actors on the world screen.

And in the middle of the zero on the wave of petrodollars our film market really began to go up and soon caught up with the Chinese. The epoch of “Night Watch” - remember this? And what answered Hollywood and other European and American film factories? Yes, new Russian-speaking actors have appeared, but ... they still play exclusively on gangsters, prostitutes, crazy military men and dictators. There are even more Russophobic films, the size of the film market, as we see, has no effect here. Is that Russian villains are now a little more glamorous, and now they are playing, even the famous English-speaking actors. This is how "the market has adjusted everything." If there is a frank political order to create a certain image of the nation, then it will be executed without regard to the cash register.

Thirdly, since 2010, foreign directors have suddenly aroused an interest in the subject of the Second World War. It is not fully understood what is behind this phenomenon: government orders with the aim of treating the population accordingly or the reaction of the artists themselves to increased global instability. However, the fact remains. It is significant that films and series appear not only in the countries of the victorious, but also the losers, and even those who did not participate in the war at all - like Sweden, where they suddenly remembered about their own border "secret struggle" against Nazism. Until then, the Second World War most often appeared only in the mass cinema of Russia, China, and, perhaps, Finland.

So bad Russian, like all other occupants, in the movies will soon become much more. And this will continue until something changes either in politics or in cinema.