April 12 2016
58
For more than two years of endless “peremog” - and then ... the Ukrainian Cabinet was left without its main Maidan mastermind - without a man who promised to put “kulu in the forehead”, oratorizing 2014 on the frosty air of Kiev in February. “Cooley in the forehead” has not yet arrived, but ... The government without Yatsenyuk, who said that in fact there is no political crisis in Ukraine, and all the talk about the crisis is artificial, now in search of a new chief. “Orphaned” several epic projects of Arseny at once, including his main charm - “The European shaft”, on which so much money is still underfilled, and the flooding of which with spring water symbolizes today the whole essence of the Maidan “success”


As soon as Arseniy Yatsenyuk on Facebook published his appeal to Ukrainian citizens, stating that his 1% (such level of support) the “Popular Front” would still be “in coalition”, President Poroshenko took the floor with clear enthusiasm. Petro Poroshenko announced that it was time to start dancing hopak and jumping higher than before, since after Yatsenyuk’s resignation, the next credit tranches will flow to Ukraine in a wide river. 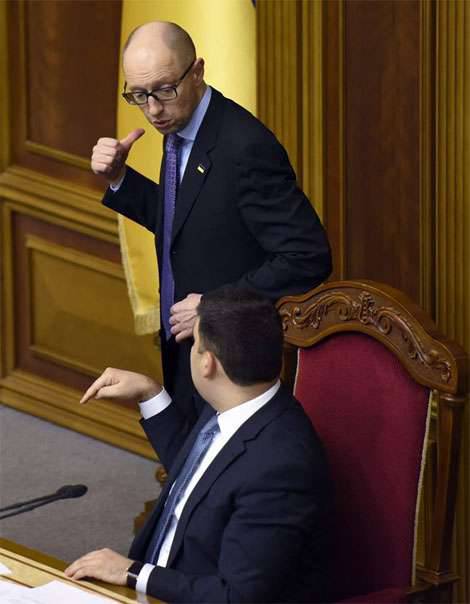 From the statement Poroshenko:
I expect that (...) deputies in charge - I hope that there will be a majority in parliament - will ensure the creation of a coalition and nominate the prime minister. I emphasize once again: I will work with any head of government proposed by the coalition.

I want to make it absolutely clear: I have no other parliament, and the next one will not be the best. And in this situation, we must ensure that the elects fulfill the obligations that they assumed when they signed the coalition agreement.

On the same day, when the new government will be elected, I will begin consultations with the leaders of the factions on the candidacy of the future prosecutor general.

As the main addition, Poroshenko said that the US literally tomorrow or the day after tomorrow is ready to provide Ukraine with long-awaited (Ukraine) financial guarantees in the amount of 1 billion dollars, that the European Union will provide Ukraine with a long-awaited loan of about 600 million euros, and that in addition the IMF is ready to ship to Kiev about 1,7 credit billion dollars. In general, to begin to panov, it remains to wait quite a bit ...

But the “credit” enthusiasm of Pyotr Alekseevich to the population of Ukraine, however much the president tried, was not passed on. And the main reason for the fact that the extrapolation of presidential happiness did not happen, apparently, you need to consider the statement of the head of the European Union representation in Ukraine, Jan Tombinsky. What could this European official say, aimed at the territory of the country with a finally-victorious democracy, that this statement triggered another outburst of resentment among the Ukrainian public concerned?

The fact is that Tombinsky immediately after the appearance in the media of materials about the submission of a letter of resignation to the Parliament of Yatsenyuk, in fact revealed the essence of the Ukrainian economic deadlock. According to Tombinsky, the European Union has not been in a hurry lately to issue another batch of loans to Kiev, not even because Yatsenyuk was in charge of the Ukrainian government, but because the Ukrainian government simply does not have an effective spending program for the allocated funds. That is, there is a government, there are individual ministers responsible for economic results, but there are no programs for the effective use of foreign funds.

While in Lviv at the local government forum, the EU representative in Ukraine, Jan Tombinsky, said that not only was there no government program for borrowing money, but there were no relatively large projects where such funds could be invested in Ukraine.
Interfax gives a fragment of Tombinsky's statement:

The European Union helps Ukraine with the means to build elements of self-government. This is almost 180 million euros for affordable programs that we launched over the past five years. We plan to launch new programs, but many funds will remain with us, because there are no Ukrainian projects for which this money can be used. The country does not need to ask for extra money, because those that were provided were not used.

At the same time, the EU representative called the help to Ukraine “unprecedented” and complained that Ukraine leaves much to be desired the question of responsibility, both central and regional.

And these words of Tombinsky sounded altogether like a sentence:
But it all depends on the Ukrainians - how much this assistance will be used. You can not help someone who does not work or works poorly.

But the very same 600 million euros of assistance from the EU, which Poroshenko promises to Ukrainians on behalf of Europeans, were designed specifically for the development of regional projects, including projects to support the process of decentralization of power and increasing the efficiency of interaction between the regions and the center - Kiev. Here are just a Poroshenko about this not a word. Here the main message from Poroshenko lies in the fact that MUST give gosh, and about why gOsh don't give, and for what projects promised to provide? - Kiev does not say anything to its citizens. It’s one thing to quickly get the funds and quickly get into the pockets of the usual howl about “restraining the Russian aggressor and the eastern outpost of Europe,” and financial reporting to the West is quite another thing. This is Russia, which in Ukraine today it is customary to blame for all mortal sins, can (at least, up to the 2014 year) afford (“gentlemanly”) not to ask where Ukraine is going to spend the allocated money. But with the European Union such a focus now clearly does not pass. Three times they will be asked and on the basis of the Kiev report they will make a conclusion for the future: to lend or not to lend.

By the way, after the Dutch referendum, the European Union actually untied its hands. As you know, the Netherlands turned out to be the only country in the EU whose authorities decided to ask the people whether they are ready to support the Euro-Association of Ukraine. The citizens of the Netherlands crown sent Ukraine to the forest, and Prime Minister Rutte said that, although the referendum was of a recommendatory nature, the Government of the Netherlands cannot afford to ignore the opinion of the majority of those who came to the polls. After that, the Netherlands can calmly withdraw its signature affixed under the agreement with Kiev, effectively providing all other adequate (precisely those) Europeans with the opportunity to sigh with relief and declare that they have nothing to do, but the EU’s corporate ethics dictate the need to lower the agreement on Euro-Association of Ukraine into toilet. That is, such a ghost of democracy in the EU is able to play its important role, which in the form of the Dutch can give indulgence to any of the European regions who do not want to associate closely (and in general at least somehow) with Ukraine. Like, we are not - the corporate spirit of the EU is such, and even these Dutch ...

In general, one thing is clear: to allocate funds even in the form of loans only for the fact that they sit in the Ukrainian Cabinet against the background of the EU flag, no one only wants, but does not intend to. EU requires a program to invest. And the Ukrainian authorities have one program: take one loan - quickly plunder - ask for (and better demand) another loan with tears and snot as an argument of support from the “Russian aggression” - and also plunder. The program, as you can see, is simple, but only with its implementation in the Maidan camp it is becoming more and more difficult ...

Ctrl Enter
Noticed oshЫbku Highlight text and press. Ctrl + Enter
We are
Ukraine changed the government. What to expect from the Groysman cabinet and what does Saakashvili have to do with it?Prime passion. Who will replace Yatsenyuk as prime minister of Ukraine?
Military Reviewin Yandex News
Military Reviewin Google News
58 comments
Information
Dear reader, to leave comments on the publication, you must sign in.