Arseniy Yatsenyuk: “I honestly did my job!”, Or a couple of words in the back of the Moor

April 11 2016
73
So, it happened! And you do not need high-profile meetings in the parliament, do not demarches and fights around the podium. Everything, as it turned out, can be solved more civilized. For a business conversation in a close and relatively friendly circle. 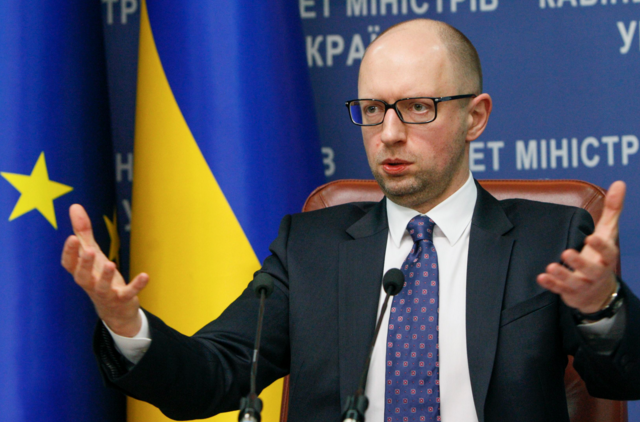 And now the man who was flying so much from all sides, the Prime Minister of Ukraine Arseniy Yatsenyuk resigned. Conscience? Come on! Just the fulfillment of the terms of the agreement with Poroshenko. After all, even the successor on the spot Yatsenyuk is well known: Vladimir Groisman. Member, of course, BPP - "Blok Petro Poroshenko."

Yes, Yatsenyuk did everything to maintain political positions and not to give extra points to the head of state. Persuade persuasion, but the future must also be taken care of.

"I decided to resign the Prime Minister of Ukraine. On Tuesday, April 12, the submission will be submitted to the Verkhovna Rada. My decision was dictated by several reasons. The political crisis in the state was artificially unleashed. The desire to change one person blinded the politicians and paralyzed their will to real changes in the country. The process of changing the government turned into a mindless run on the spot. The authors of the crisis became hostages of circumstances and made us all hostages: the government, the society, the state. "

Yatsenyuk also said that he "honestly did his job," and said that, "having done everything for stability and heredity of the course," he decided "to transfer the duties and responsibilities of the head of the Ukrainian government."

In his address, the outgoing prime minister asked the parliamentary faction of his Popular Front party to support his own resignation, and at the same time the candidacy of a successor. And he confirmed that the Popular Front will remain in the new ruling coalition for the time being.

And one more statement in his address was already made by the former prime minister. It makes you think about some future prospects and ambitions of Arseny Petrovich.

"I’m putting together the duties of the Prime Minister and with dignity I emphasize my national duty to the state. I see my powers broader than the powers of the head of government."

It is clear whose powers may be broader than that of the prime minister. There is nothing to say, the plans of Arseny Petrovich, to put it mildly, are Napoleonic. But it's not our business to judge, after all, Yatsenyuk is big, he knows better what to do and how.

Yatsenyuk’s “cleaning” was, frankly, the only opportunity to save at least some semblance of unification in the Rada. The crisis that broke out 17 February, brought its fruit. With the release of the ruling coalition of the three parties, "Self-help", "Batkivshchyna" and Oleg Lyashko's Radical Party, the majority in the Rada could be forgotten. As well as the very concept of the ruling coalition.

I had to roll up my sleeves to correct the situation. Corrected.

As a result of negotiations in March, an agreement was reached on a new government that will be headed by Vladimir Groysman, close to Poroshenko, but Yatsenyuk and the Popular Front will retain their positions, for example, the posts of Minister of Internal Affairs and Justice. In compensation, they also seem to receive the vacant post of Speaker of Parliament. The candidate for this position is the current vice-speaker, Andrey Paruby. A famous figure, mainly due to his frenzy and nationalistic beliefs.

The current head of the administration Poroshenko, Boris Lozhkin, who has recently become the person involved in an “offshore scandal”, will enter the new government as deputy prime minister for economics.

The only surprise in the new government is the candidacy of the future prosecutor general, Yuriy Lutsenko, who does not have a law degree. That, however, did not prevent him in his time to lead the Interior Ministry. For the sake of his appointment, as suggested by the publication Mirror of the Week, which published a list of likely candidates, Rada will go on passing amendments to the law On Prosecutor's Office. So, the adoption of amendments and approval of the case will definitely not arise.

Strange, but the names of Yaresko and Saakashvili are not mentioned there. Although it still does not say anything.

The Popular Front remains in the coalition, because today, according to Yatsenyuk, this is the only way to protect the country. Well, and do not stay with nothing in particular. In this regard, Arseny Petrovich is very pragmatic. We will vote, the issue price. Normal approach.

In general, Arseny Petrovich is still an optimist. Especially in regard to his party. Playing on the opportunity to go into the opposition, he is seriously counting on political preferences, and that it’s no secret to be in the presidency, as can be seen from his statement. This is despite the fact that the "Popular Front" has a rating, the level of which experts equate to a statistical error.

"We love the country, the rating is coming"

And leaving, as practice shows. First, the rating left, now Yatsenyuk leaves. Closed another page in the modern Ukrainian stories. But the show will go on. We look.

Ctrl Enter
Noticed oshЫbku Highlight text and press. Ctrl + Enter
We are
Ukraine changed the government. What to expect from the Groysman cabinet and what does Saakashvili have to do with it?Prime passion. Who will replace Yatsenyuk as prime minister of Ukraine?
Military Reviewin Yandex News
Military Reviewin Google News
73 comments
Information
Dear reader, to leave comments on the publication, you must sign in.