Currently, there is a widespread misconception that primacy in the use of camouflage uniforms belongs to the SS forces. Perhaps, with regard to the specialized uniform, the priority of these troops of Nazi Germany really exists, but the first camouflage cloaks appeared in the Italian army in 1929, and the famous camouflage cape “Zeltbahn” became generally accepted in the German army from 1931 onwards, that is, before the creation of the Waffen-SS troops.

The earliest camouflage that the Germans used during World War II was Heerres-Splittermuster-31. Its appearance dates back to June 1930, when the triangular cape Dreieckszeltbahn appeared, replaced from the year 1931 in the army by the gray cape Viereckige Zeltbahn, which had a rectangular shape. Then the now famous cape “Zeltbahn-31” was born, which probably became the most massive camouflage uniform in stories. Almost all Wehrmacht soldiers, the Luftwaffe, the SS troops, the coastal artillery of the Kriegsmarine and even the policemen had capes. These capes were distinguished by the presence of a camouflage called "Heres-Splittermuster". The main characteristic of this camouflage was small vertical strokes - “Strich”, which were applied over traditional camouflage spots. At the same time, spots of different geometric shapes used on this camouflage belonged to different types of destructive camouflage, which was used during the First World War. According to experts, in practice this scheme was not particularly effective - at a distance the multi-colored spots just merged into one color. 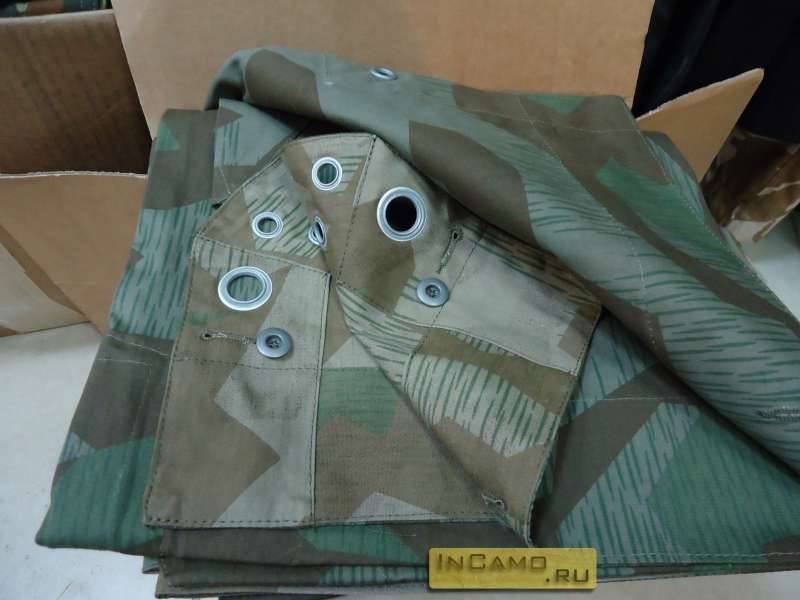 Many researchers are not inclined to attribute the Zeltbahn-31 cape to camouflage clothing, emphasizing that tents and tents were very often built from them, at worst they could be worn for protection from the weather, but not for camouflage on the ground. At the same time, the opposite point of view, according to which the capes were used as camouflage clothing, is confirmed by numerous photographs, as well as the memories of the war veterans themselves.

It is worth noting that for a long time in Germany they simply did not think about the release of a special camouflage uniform. In those years, khaki and its German counterpart - the gray-field equivalent of feldgrau (feldgrau) throughout the world was considered very practical. However, the leadership of the SS considered that this camouflage is not enough. They needed this type of camouflage, which would allow the fighters not only to dissolve against different landscapes, but would not lose their properties depending on different weather conditions and seasonal changes, for example, such as fallen yellowed foliage. As a result, the first versions of the new camouflage were tested by the “Germany” regiment in 1937, and in June, 1938 were personally approved by Himmler.

Surprisingly, for almost a decade Zeltbahn-31 capes remained the only option for Wehrmacht camouflage clothing (not Waffen SS), until in 1942, Tarnhemd jackets and Tarnheluberzug helmets began to appear in the army. On one side, jackets and covers had camouflage, which was similar to the one on Zeltbahn-31 capes, and the other side was white, the color of snow. At the same time, the appearance of camouflage in the units and formations of the Wehrmacht was initiated precisely by the spread of camouflage in the SS forces. 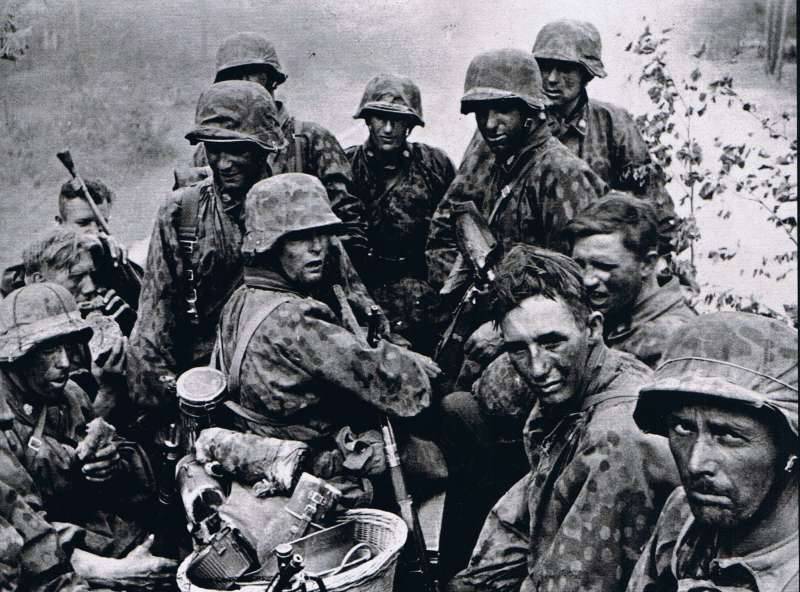 The camouflage jackets of the Wehrmacht and the SS troops had a very loose fit, which allowed them to be worn over standard uniforms. On the sides of the jackets, large vertical slits were made, which provided access to equipment mounted over the field uniform, as well as opening access to the pockets of the uniforms. In the lower part of the sleeves of this anorak blouse, there were sections with elastic bands or with laces, strap, and drawstrings with a cord were at the waist. The front incision could be laced from the middle of the chest to the throat, the collar on this blouse replaced the hood with cord pull. Hem often tuck. Over time, spacious pockets with flaps on buttons were added to the anorak blouse, chest slots were also decided to be covered with flaps. On the latest models - on the shoulders in front and behind, as on the sleeves - loops sewn with a ladder appeared, which were intended to fasten branches or tufts of grass in them for even greater disguise on the ground.

Spotted blouses began to appear in the SS forces back in 1938, with gradually similar clothing, as well as camouflage jackets and shirts, parts of all military branches in Germany were provided. Anorak blouses, which were worn over the head over the tunic, were originally made of cotton fabric with a slight addition of viscose. Since the neck, cuffs and waistband were tightened with the help of laces, this gave the blouse a characteristic baggy look, this only enhanced the masking properties and protected the uniform over which it was worn, from dirt and mechanical damage. Up to 1940, the camouflage pattern was applied to the fabric by hand using a stencil, this method significantly slowed production, but when it was possible to transfer production to the machine method of printing the pattern, the output increased significantly. By June 1940, part of the SS received 32 thousands of camouflage blouses, and 30 thousands more were released by September of the same year.

Army camouflage blouses were sewn from tent fabric with a “blurred” or “comminuted” pattern, with a white or beige inside. In total, the SS troops had 7 order of various types of camouflage patterns. In addition, each was made in a dark and light scale on both sides of the canvas. Most often, the drawing was a scattering of small spots with a rounded or irregular shape, with a blurred or clear outline. In general, the picture looked like a carpet of fallen leaves against a background of grass or earth. Exactly the same melkopyatnistaya fabric was on the SS cloak. After the occupation by the Germans of Italy, in the second half of the 1943, the Wehrmacht and the SS units used Italian camouflage fabric, which was distinguished by a three-color, large-mottled pattern. This camouflage could be found later on the Eastern Front, mainly in the divisions that came from the West. 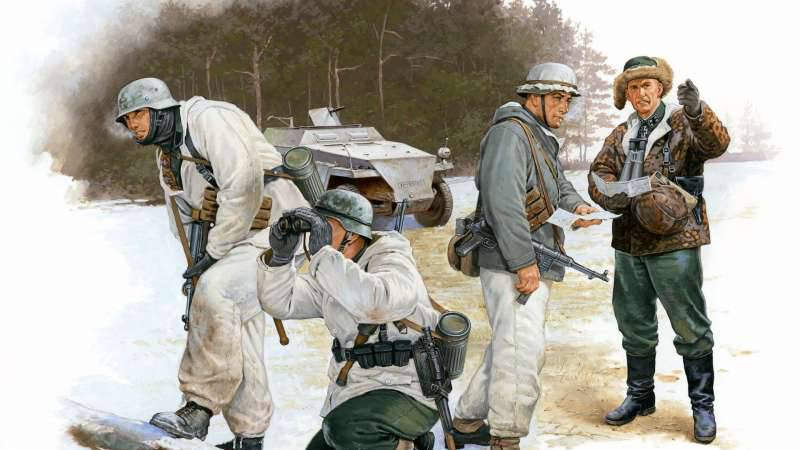 In addition, the SS troops often combined with a gray-green field jacket also camouflage cotton trousers that were worn over cloth or just instead of them - they were part of a full camouflage suit with a swing jacket. The pants had a counter-valve with three buttons on the neck, the flap pockets of the pockets, slightly bent forward, which were fastened with a button, and there were long ribbons along the waist and low legs. The jacket, which was included in this set, looked more like a field jacket, but with an open collar (there were other options), and the insignia of the SS units were not sewn onto it. However, a sleeve eagle and removable shoulder straps were allowed, in the heat of a camouflage suit you could wear directly on underwear.

In addition, a special warm long jacket with a fur lining was created for the SS troops. On top of this jacket covered the fabric with stains of green-brown tones, on it was four warm outer pockets and a hood with fur. This jacket was supposed to be used in the cold season, but it was a snowless period. Especially for winter camouflage consisted of gray, white and gray-blue tones, which are made in the form of a comminuted pattern.

According to the colors, camouflage, which was used in parts of the SS, was divided into three main types: shades of green and purple-brown for the summer, dark gray and light gray for spring, brown and yellow for autumn. If we talk about the coloring itself, it was usually divided into 5 of the main types, which, one way or another, were associated with the plant world: "broadleaf", "palm", "pea", "comminuted" and "oak leaves". At the same time, as already noted above, having approached the creation of a camouflage uniform with all German thoroughness, the developers have foreseen the option of turning the clothes out, while the camouflage pattern on both sides has always been different. 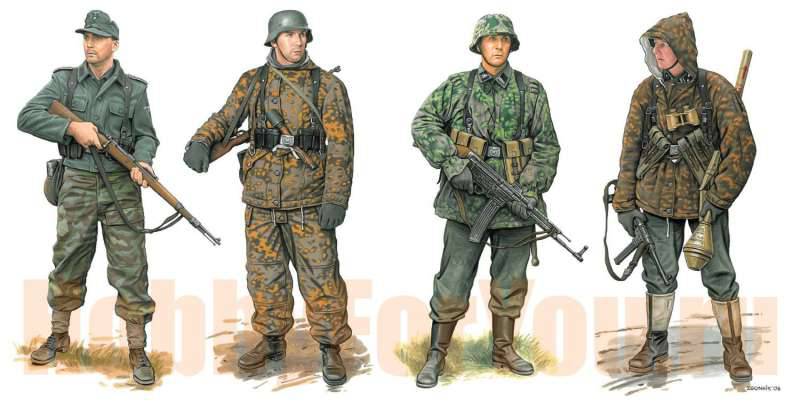 Also, camouflage and caps were sewn from camouflage in Germany, and warm hats were covered with special material that was used to sew spotted jackets. At the same time, the Waffen SS soldiers had their own covers for steel helmets, which were more expensive and more qualitative than the covers of Wehrmacht soldiers. Such covers consisted of 14 basic flap parts, while ordinary military had only 5 parts. They were attached to the helmet with a special pocket, which was worn directly on the visor and three spring hooks on both sides, as well as at the back. The fabric was also double-sided and had special loops (loops) designed to fasten grass or branches. At the same time, some cases were additionally equipped with a mask that could hide the face of the sniper or the observer. Winter versions of these masks were made of wool and cotton, which protected the German soldiers from frostbite.

It is worth noting that almost the entire form of military units of the SS completely or partially copied army samples and models, and often simply was taken or purchased from Wehrmacht’s warehouses. However, this did not apply to camouflage, in the field of which Himmler's soldiers were considered to be real trendsetters.