On the role of personality in history. The victory of Vojislav Seselj over the Hague Tribunal 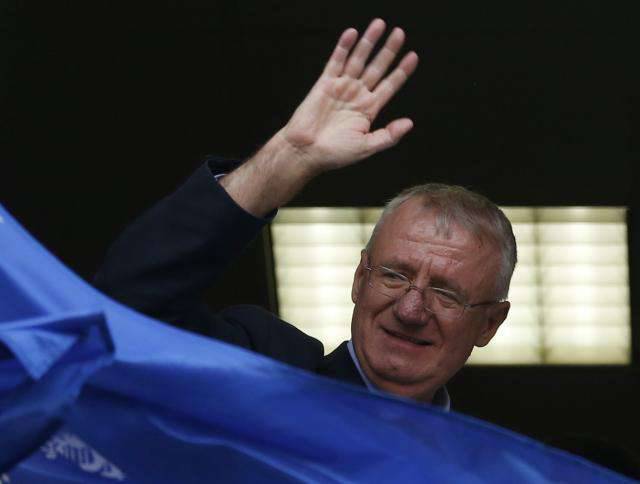 31 March The International Tribunal for the Former Yugoslavia (ICTY) announced the verdict to the leader of the Serbian Radical Party, Vojislav Seselj. Judge J.-C. Antonetti read out the verdict:

“The accused Vojislav Šešelj, the court chamber, by a majority vote, decides:

- Accusation of persecution as a crime against humanity: innocent;

- The charge of murder as a violation of the laws and customs of war: innocent;

- The charge of torture: innocent;

- The accusation of the destruction of settlements that have no military significance: innocent;

- The accusation of deliberate destruction of objects with a religious purpose: innocent;

- The accusation of plundering property: innocent.

In accordance with this decision, Vojislav Šešelj is declared free. ”

The recognition of Seselj innocent and his release caused a real hysteria among pro-Western NGOs and even in government circles of some Balkan countries, in particular Croatia. Thus, the Croatian Prime Minister T. Oreshkovich said that he was ashamed of the decision of the tribunal. The hypocritical nature of such statements is emphasized by the complete absence of shame after justifying the Croatian General Gotovina, under whose leadership the most massive ethnic cleansing was done since the Second World War, when the entire Serbian population of Croatia (in the Republic of Serbian Krajina) was expelled on four days of August 1995. homeland.

The authorities of the Hague Tribunal tried "not to notice" that Seselj is justified. The official website of the ICTY reported that the decision in the Seselj case was “announced”. To say that Seselj is justified, the editor of the site did not dare. But on the same site posted the dissenting opinion of Judge Lathanzi, who did not agree with almost any conclusion of the judicial chamber that justified Seselj.

The case of Vojislav Seselj is the most disastrous case of the Hague Tribunal. Since the issuance of the indictment until the last day, this process has been characterized by a flagrant violation of all legal norms. The indictment against V. Seselj was drawn up at a time when the prosecutor's office had no evidence of his guilt. The former chief prosecutor of the ICTY, C. Del Ponte, confessed in her memoirs that the then prime minister of Serbia, Djindjic, asked her to "remove Seselj from Serbia and never to return him back." C. Del Ponte has filed an accusation, intending to use it as a means of pressure on Seselj, but he instantly confused all her cards, voluntarily arriving in The Hague a few days after the charge was announced. And even in the five years that passed between the arrival of Seselj to the tribunal and the beginning of the trial, the prosecutor’s office failed to prepare the process.

Whatever means the tribunal resorted to in order to get the Serbian politician charged! It is known that if the accused is defended by a lawyer, he has no right to appear in court. The authorities of the tribunal understood that if Seselj was going to defend himself in person by refusing a lawyer, they could not prove anything! Understood this and Seselj. Therefore, he defended his right to defend himself personally, even at the risk of his life, when he went on a hunger strike in 2007. It took 30 days of the hunger strike to force the Hague Tribunal to recognize its right to defend itself - even though this right is also provided for by international acts of the rights of the accused and the ICTY Statute!

When five years later, after Sechelles voluntarily surrendered himself to the tribunal, the process began, it turned out that the prosecution had no witnesses against Seselj. It turned out that the prosecutor's office was not looking for real witnesses - she was preparing false. More than 30 witnesses appearing in court testified that the ICTY prosecutor’s office threatened them and their family members with the aim of forcing them to give false testimony against Seselj. And no one in The Hague bore responsibility for this!

Realizing that the prosecutor’s office had lost, the ICTY authorities decided not to allow Sheselj to introduce their witnesses. The process of the leader of the Serbian Radical Party has become unique in stories international "justice" - the accused was not allowed to present his defense! The secretary of the tribunal insisted that Seselj had his own money to pay for the arrival of his witnesses from Serbia to The Hague, but could not prove it. Then the secretary said that Seselj could ... sell his house and let the proceeds to pay for the arrival of his witnesses in The Hague. In any normal court of law for such tricks the court could divide the secretary so that only feathers would fly from him. Instead, we heard from the chairman of the Court of Justice an incredible statement of impudence: “Mr. Seselj, you have many supporters in Serbia, if each of them folds 1-2 euros, you will gain your defense!” ...

The Tribunal allowed for the mockery of the accused when he was sentenced to jail three times for alleged disrespect for the court. Shesel's health was deliberately undermined: he, a patient with asthma, was transferred from a cell where windows were opened and there was access to fresh air, into an air-conditioned cell that cripples even healthy people. He was inserted into the heart of a pacemaker, which, instead of helping, was randomly hitting him with a current, and then blamed it on the device’s “fault”. The case of an attempt to deliver unknown medication to him in prison has not yet been investigated.

... Seselj is acquitted. In the prison of the Hague Tribunal, he spent almost twelve years. Once he called himself "the best lawyer in the world", and in fact it is true: no one has yet succeeded in what the professor of law Voislav Seselj did. Defending himself, without a lawyer, he defeated the tribunal, which went to great lengths to convict him.

Yes, there was support for the defense team in Serbia, but it did not play a decisive role. Yes, there was tremendous support from the country's population and members of the Serbian Radical Party, but it was he who led the real legal battle - Seselj. And he won.

He won not only the process started against him - he turned the case against the tribunal itself. Despite the fact that none of his lawsuits against the officials of the ICTY were satisfied, these claims were included in the annals of international justice and became public. And the authorities' rejection of the lawsuit only confirms that the crimes were committed not by individual ICTY officers, but by the tribunal as an institution.

The Seselj process has already entered the history of international justice, for it has shown that there is one soldier in the field, if he is ready to stand for the truth to the end.

These days Vojislav Seselj leads the party he leads to the parliamentary elections of 24 April. He summarizes his program for Serbia in three points: not in NATO, not in the EU, but with Russia.