The referendum, which "sentenced" Poroshenko and the European Union

April 8 2016
62
As a result of the calculation of one hundred percent of the ballots after the referendum in the Netherlands, it became clear: the majority of voters opposed the association of Ukraine with the EU. In addition, the initiators of the plebiscite clearly demonstrated what direct democracy is. True, the referendum is “consultative”: its results can be discussed by the Government of the Netherlands, but not binding for implementation. At the same time, it should be noted that both the government of this country and the supranational political elite in Brussels found themselves in a difficult situation: after all, going against the will of the Dutch people means naturally attacking the principles of democracy. 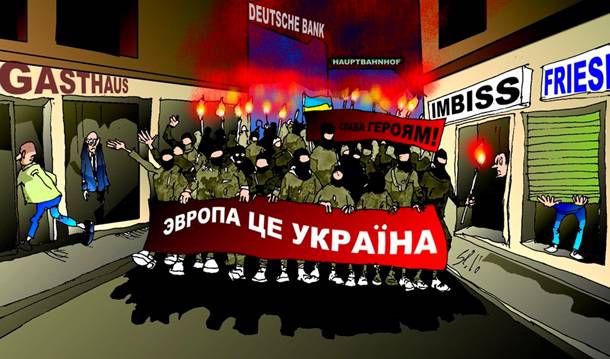 Recall that the Netherlands remained the only country in the European Union that “stalled” the already ratified association agreement between Ukraine and the EU. "Stalled" in quotes because the Netherlands parliament also ratified it. The EU Association Agreement with Ukraine entered into force on January 1 2016. However, the citizens of the Netherlands were granted the right to express their attitude to the legislative document, if not less than three hundred thousand people wanted it. Opponents of European integration have collected more than four hundred thousand signatures for the plebiscite.

After counting all the ballots, it turned out the following. Voter turnout was 32,2%, which is quite small for such a widely publicized and propagandized event. On the other hand, the minimum threshold was surpassed: by law, at least 30 percent of voters should participate in the voting by the authorities of a referendum held in a vote.

61,1% of the participants of the plebiscite voted against the EU Association Agreement with Ukraine. The Dutch press calls this number the “overwhelming majority.” The number of “no” answers almost coincided with the results of exit polls and the predictions of European analysts who expected the collapse of the “Ukrainian theme” in the Netherlands.

Thus, the voting was considered valid; most of its members opposed the association agreement. Now it's up to the Dutch government to discuss the popular decision. According to some information, the discussion “in the offices” is expected as early as next week, probably immediately after the announcement of the final voting results. This will happen on 12 April. So far, the ballots have been submitted to the central commission for the holding of the plebiscite for recount and reconciliation. But they are unlikely to be very different from the results announced on the night of 6 on April 7.

Since the referendum was held, and the majority of participants expressed opposition to the association, the Dutch government would have to submit a proposal to parliament: either leave the association agreement in force (and defy the will of the people), or refuse to ratify (and complicate relations with the European Union).

The leadership of the “Square” referendum results are extremely dissatisfied. This is not surprising: such an agreement is the last career hope of Poroshenko, who recently landed almost at the center of a major scandal with “Panamanian papers”, and earlier came under fire because of a corruption prosecutor general. And if the Netherlands now hacks into the European agreement, Poroshenko’s career will come to an end. He has nothing more to promise to the people: the people “maydanil” precisely for the sake of a happy visa-free future and a merciless fight against corruption in Kiev. Neither the first nor the second. Yanukovych fled from the golden toilet to Russia, and where will Poroshenko run? Maybe to America? But there, as the press writes, his recent hot speeches, addressed to the powerful, were not appreciated. Wherever you throw, everywhere wedge.

But Poroshenko was going to the second presidential term. Horses at the crossing do not change, you know. The president promised the people that Kiev would apply for membership in the European Union in 2020. Whether the European Union will exist in 2020 is a big, true question.

Petro Poroshenko has already made a statement. He believes that the referendum in the Netherlands was directed against the unity of Europe.

Poroshenko thanked the Dutch, who voted for the association agreement.

According to the Ukrainian president, the results of the referendum in the Netherlands will not be an obstacle to Ukraine’s European integration. “I want to emphasize,” the newspaper quotes him. Kommersant- that this referendum, in accordance with the constitution and legislation of the Netherlands, is of an advisory nature only. Now it's up to the government, the parliament, the politicians of Holland. I am confident that, strategically, this event is not an obstacle on the way of Ukraine to Europe. ”

Let's compare this opinion with the comments of the Dutch.

Feedback from residents of the Netherlands about Ukraine and the Euro-association with this country led "First channel".

"I'm against. This contract is unlikely to help our business to conquer new markets. And ordinary Ukrainians will not get our help. That's for sure!!"

"I will tell you honestly, a united Europe, especially with Ukraine, is not to my liking."

“I voted for to help the Ukrainians in their plight. Those who vote against, mostly vote against Europe and the current government. And Ukraine is too early to accept in the EU. ”

“I do not support this agreement, that's for sure. Ukrainians want our money, their authorities do not carry out reforms, why do we need their problems! ”

Netherlands Prime Minister Mark Rutte does not exclude that his country may refuse to ratify the association agreement.

“If the referendum is declared valid, then this will entail corresponding consequences,” he said. TASS. - The issue will be discussed at various levels, including in the national parliament and in the EU. And it will take some time, maybe days or weeks. ”

The agency cites opinions and other Dutch politicians.

“We have a difficult situation, because 27 of the EU countries and Ukraine have already ratified this agreement,” says a supporter of the association and the leader of the Labor Party, Diederic Samsom, who is a member of the ruling coalition. “However, it’s impossible not to take into account the vote of those who voted against.”

The leader of the opposition party "Democrats-66" Alexander Pehtold said unequivocally: "No, no, no." According to him, in the referendum, "someone still had to win, and someone to lose."

“The difference between supporters and opponents is visible to the naked eye,” said Emile Rumer, leader of the Socialist Party. In his opinion, the Netherlands should refuse to ratify the agreement.

The leader of the Dutch extreme right, Gert Wilders, said about the victory of euro skeptics: “When two-thirds of the voters say no, this is a vote of no confidence of the elite population in Brussels and the Hague.”

Here is another interesting opinion. From Kiev.

The result of the referendum in the Netherlands is a “verdict” to President Poroshenko, said Mustafa Nayem, a member of the pro-presidential faction “Petro Poroshenko’s Bloc” in the Verkhovna Rada.

“This is a sentence to the president of the country, who, having all powers, for two years, systematically and persistently between the past and the future, chose the past; who, in spite of the cries of people and his own declared slogans, chose “elite” and oligarchs as partners rather than civil society and a new generation, ”Nayem quotes "Lenta.ru".

Nardep also noted that the results of the referendum show how Ukraine is evaluated by "ordinary Europeans".

It can be assumed that the government and the parliament of the Netherlands will go against Europe, because they cannot ruin their relations with voters. Recall that in a year parliamentary elections will be held in the country, and the attitudes of Euro-skepticism are very popular.

However, no matter how it happened, the results of the vote, sad for Kiev, are unlikely to become an obstacle to the "wedding" of Ukraine with the European Union. In fact, the matter has already gone much further engagement. Yes, the government of the Netherlands is obliged to discuss the results of the referendum and make a decision (to offer the parliament either to leave the association agreement in force or to refuse to ratify), and the parliament can agree with the will of the majority. However, the previously adopted association agreement will still be implemented in terms of the establishment of a free trade zone (FTA), which falls under the supranational competence of Brussels. Therefore, Mr. Poroshenko still has something to cling to. The will of the recalcitrant Dutch, very inconvenient for Kiev, he could declare as the intrigues of Putin, who "intimidated" free Europe.

Observed and commented on Oleg Chuvakin
- especially for topwar.ru
Ctrl Enter
Noticed oshЫbku Highlight text and press. Ctrl + Enter
We are
Results of the week. “I will tell you one clever thing! Only you do not be offended! "Situational analysis of the death of the MH17 flight (Malaysian Boeing 777), made on the basis of engineering analysis from 15.08.2014
Military Reviewin Yandex News
Military Reviewin Google News
62 comments
Information
Dear reader, to leave comments on the publication, you must sign in.