April 6 2016
29
On Sunday, during a mass in St. Peter’s Square in Rome, Pope Francis announced to the tens of thousands of believers gathered for worship that April 24 will hold a special fundraising donation for all Ukrainian people in all churches of the Roman Catholic Church in Europe. The pontiff called the upcoming action “a gesture of charity that will not only alleviate material suffering, but also demonstrate my personal closeness and closeness of the whole church” to the people of Ukraine. 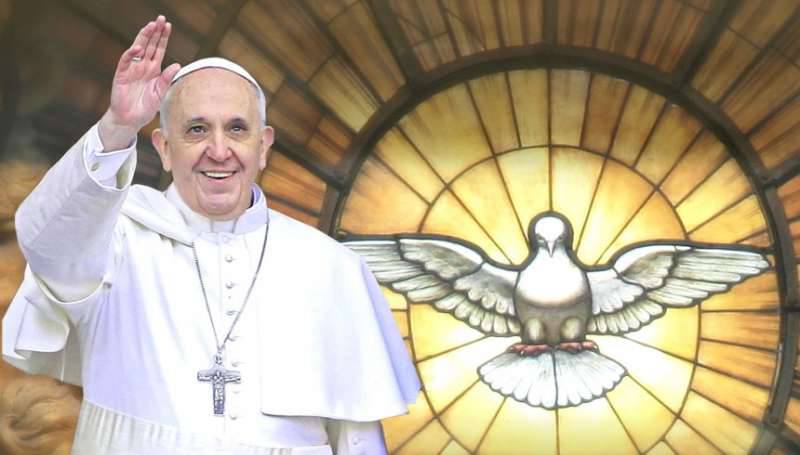 Now on the continent there are about 120 thousands of Catholic parishes. Most of them in Italy - about 27 thousand. Probably, the Catholics of Ukraine itself will take part in the gathering. While the reaction of local hierarchs is not. These days, the head of the Ukrainian Greek Catholic Church, Archbishop Svyatoslav Shevchuk, and the Ordinary of the Kiev-Zhytomyr Diocese of the Roman Catholic Church in Ukraine, Archbishop Peter Malchuk, as part of a delegation of Ukrainian religious leaders, trampled high offices in the Netherlands, trying to influence the results of the referendum on the approval Ukraine and the European Union.

The clergy took active political actions to implement the association agreement. Meanwhile, the Ukrainians have already had some disappointment in the conditions in which the European Union has placed bilateral trade relations. For three months, Ukraine has almost exhausted the annual quota for the supply of its competitive products to Europe.

As the Lviv information website Katolitskiy Ogladach testifies, the delegation of religious leaders met with the senators of the Netherlands, visited the committee of international relations. Archbishop Shevchuk, in an interview with the site, noted that Ukrainian clergymen found support from the Dutch parliamentarians.

Pope Francis, meanwhile, was taking care of charitable aid to Ukraine. The pontiff did not specify to whom and how it will be distributed. But the specific was the representative of the UN World Food Program in Ukraine, Giancarlo Stopponi. He said that because of the conflict in eastern Ukraine, 1,5 was undernourished by a million people. Of these, 300 000 need immediate food assistance.

Stopponi did not make a distinction between the self-proclaimed republics of Donbass and the population of the rest of it, controlled by the official Kiev. In the republic of Donbass food aid was already underway. Issued monthly food packages, vouchers for the purchase of food. Now, UN experts have come to the conclusion that everywhere there are people who need the support of an international organization.

In this regard, WFP has set a goal to provide those most in need with monthly food aid during the first half of 2016. Giancarlo Stopponi called on "all parties to the conflict to ensure full and unimpeded humanitarian access to all needy citizens across the country."

A statement by the representative of WFP UN happened six weeks after the memorable speech by the US Ambassador to Ukraine Jeffrey Payette at the ceremony of signing an agreement on US investment in the construction of a grain terminal in the Yuzhny sea port in Odessa region. Payette then called on the Ukrainian authorities to turn the country into a food superpower. For this, in fact, there is potential in the country. However, while the food and assistance will be taken to Ukraine.

The UN World Food Program annually feeds 80 to millions of people in approximately 80 countries. Among them is Liberia. She was recalled in February by former US Secretary of State Condoleezza Rice, who, at the invitation of the Victor Pinchuk Foundation, drove to Kiev for a day with a lecture entitled “The Challenges of a Changing World”.

Ukraine met Rice with a severe economic and political crisis. This was reflected in the mood of the audience. Listeners knew that on the eve of the English magazine The Economist called Ukraine the worst economy in the world. They asked about the opinion of Condoleezza Rice. “If you think that you live badly here, go to Liberia,” the American replied. “Then you will be glad that the Ukrainians are.” Joy was short lived. The UN Food Program has now entered Ukraine.

So much trouble rained Maidan

Therefore, about someone will gloat, someone sincerely sympathize with the unfortunate Ukrainians, on whose head so much misfortune rocked the one hundred thousandth Maidan. For some two years, the country has actually sunk into poverty. And this is not a scathing metaphor of "Kremlin propaganda." This is the conclusion made by the Kiev Institute of Demography and Social Research of the Academy of Sciences, native to Ukrainians. According to him, Ukraine is getting closer to total poverty of the population.

At the end of the year, the 2015 of the year, demographers are still operating with estimates. Today, 79% of Ukrainians consider themselves poor. Their satisfaction with life dropped to four points on a 10-scale. Affected by more than 40% increase in prices for all products and services, the decline in real wages and many months of delay in its payment.

People are in trouble by the will of the authorities. In a recent report by the UN Office for the Coordination of Humanitarian Affairs, it is noted that Kiev suspended or canceled benefits for more than 600 thousand internally displaced persons and froze pensions for more than 370 thousand residents in Donetsk and Lugansk regions. People were left with virtually no means of livelihood. No wonder the turnover of retail trade in Ukraine for the year decreased by a quarter.

But the main troubles, of course, from the economy. Last year in Ukraine it fell by 10 percent, but on the contrary, unemployment jumped to 11,5 percent. At the beginning of the year, the authorities in Kiev declared that they had felt the bottom of the crisis, and now the way to growth and prosperity is opening. Recent data for the first quarter completely refuted this version.

The former head of the National Bank of Ukraine, Sergey Arbuzov, on his Facebook page, spoke about a sharp reduction in demand for products of the basic branches of the Ukrainian economy. “There is a significant drop in orders. In chemical production - minus 7%, in metallurgy - minus 9%, in the production of computers and electronics - minus 30%, in the production of machines - minus 4%, ”Sergey Arbuzov shared his assessments. It means that the prosperous prospects, which were in a hurry to report in Kiev, have passed into the category of political myths.

Uncertainty about the future of Ukraine began to oppress even its European partners. The famous German publicist Theo Sommer made a disappointing conclusion on the pages of the Die Zeit newspaper: “With sober consideration, Ukraine is becoming, and perhaps has already become, an untenable country - exhausted, kleptocratic, plundered by corrupt bureaucrats and oligarchs.”

When Theo Sommer wrote these lines, he still didn’t know about the offshore scandal with the President of Ukraine, Petro Poroshenko, who managed to drive money into the Panamanian bank, intended for paying taxes to the Ukrainian treasury. According to Forbes, Petro Poroshenko got rich by $ 2015 million for 108 a year. Now in the Ukrainian ranking, he is ranked sixth with a fortune of 858 million US dollars.

Europe offshore scandal Poroshenko forgave. At least, the EU ambassador to Ukraine, Jan Tombinsky, said that this история "Will not affect relations between Kiev and Brussels, since the situation with the use of offshore companies is a global problem."

White House spokesman Joshua Ernest, too, condescendingly reacted to the accusations of Petro Poroshenko in participating in the Panamanian offshore and did not even comment on them. But he noted the "commitment of the Ukrainian government to the fight against corruption."

Against this background, the ex-US Secretary of State Condoleezza Rice’s advice looks like a mockery at the aforementioned lecture in Kiev. She then quoted 35 American President John F. Kennedy: “Do not ask the state what the country can do for you.” Ask what you can do for your country. ”

While Ukrainians are embarrassed to ask, the Pope and the UN World Food Program are rushing to help them. How else? After all, the crisis is deepening, and not only ordinary people suffer from it, but even the wealthy. According to the data of the same Forbes, last year, the total state of 100 of the richest Ukrainians fell by a quarter ...

Ctrl Enter
Noticed oshЫbku Highlight text and press. Ctrl + Enter
We are
Heavenly patron of the Bulgarian-Russian friendshipPresident Poroshenko decided to connect the Pope to the internal disassembly of Ukrainian
Military Reviewin Yandex News
Military Reviewin Google News
29 comments
Information
Dear reader, to leave comments on the publication, you must sign in.