April 4 2016
38
The resignation to Prime Minister Arseniy Yatsenyuk has been prophesied for a long time, prophesying the entire ukropolitikum, already shouting in the center of Kiev: “Yatsenyak on Gilyak”, but he still does not leave ... 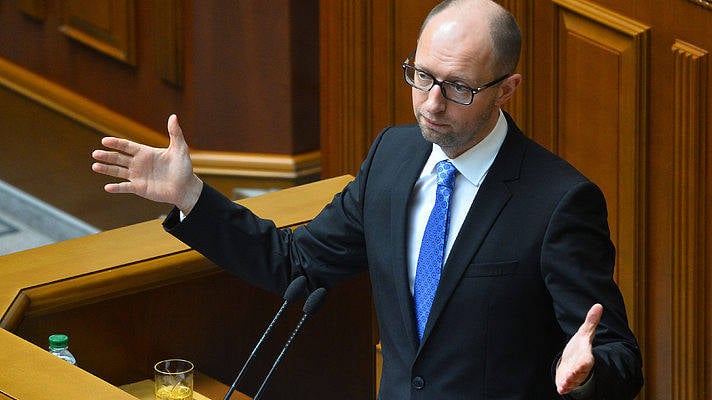 Ukrainian expert, Ph.D. Nikita Vasilenko, gives a prediction: “Yatsenyuk will be put on hold, but this is not enough, he must be given under a military tribunal, or immediately a bullet in the forehead. Even Hitler did not do what he did; in two years the country's GDP fell by 25 percent. Yatsenyuk worse than Hitler. People are beggars. Early elections are inevitable. ”

Vasilenko is echoed by the Ukrainian oligarch Dmitry Firtash in an interview with Bloomberg: “I don’t like the way the Americans rule Ukraine. Ukraine today is not a successful project, America has not coped with this task. She made a battlefield instead of a solution; she destroys everything. Both economically, and politically, and practically the country has become impoverished. The current government is a political bankrupt. This is no longer discussed. There is nothing to expect from this government. It manifested itself absolutely clearly in two years and led the country to a catastrophe. ”

Another attempt to overthrow Arseniy Yatsenyuk was announced at the March 25 Rada meeting. But ... they canceled the Rada meeting. Then the presentation failed as a new premier Groisman. 27 March Yatsenyuk in his Sunday televised address triumphantly stated that there was no alternative to the program of his government.

Indeed, 28 March failed to agree on the inclusion of the government’s resignation on the agenda. And all this история resignation has been dragging on for a month and a half, since February 16, when the Rada recognized Yatseniuk’s work as unsatisfactory, but left it in the premiership.

Yes, Prime Minister Rabbit responds to his critics, my policy was not without mistakes, but ... it was carried out in front of everyone. And hints at his patrons in the higher colonial-Payetto spheres. The secret of Rabbit's longevity was discovered, perhaps, without noticing this, his former formidable Batkivshchyna party leader Yulia Tymoshenko: “He’s a crap!” This sign of Yatsenyuk explains everything, and the love of the US State Department for it, and the results of its activities for Bandera. Paradox: he caused her damage more than Putin and his entire royal army.

In fairness, it must be admitted that Yatsenyuk, at the very beginning of his state career, tried to jump off the premiership, but the newly elected president, Poroshenko, and the entire gosdepovskaya political party, firmly asked him to stay. Yatsenyuk simply could not escape ...

And today he is afraid of leaving the premiership, because he is afraid that all sins and all sins will be hung on him. And in this he is right. Sergey Kaplin, a people's deputy from the Poroshenko faction, who is also called his inner voice, said recently that it was time to tell the truth: Yatsenyuk and Turchinov are guilty of starting a war in the Donbas, and not President Putin at all. What would it mean? ...

The resignation can destroy the brother-Rabbit, along with the accumulated overworking of one billion green cabbage, which is especially offensive to him. After all, they may not be allowed to run away. Too many today in Bandera promise him a “smack in the forehead,” about which he himself gave a hint at Euromaidan two years ago. Like, ready to die for the Nazi revolution! And today she asks to fulfill this promise! The revolution loves to devour all its children, even the rabbit premiers!

If you look at Yatsenyuk from a historical perspective, he reminds Alexander of Kerensky, the interim prime minister of the Russian revolution 1917 of the year. The appointment of Kerensky as prime minister was greeted with enthusiasm by the entire progressive public at that time, as the hope of a peaceful development of the revolution, almost like Yatsenyuk. Only physiologist Pavlov immediately disliked the temporary prime minister: “What a snot on the body of statehood. He will destroy everything! ”

The scientist-physiologist was right, he was well versed in the physiology of people, and therefore was a major political expert. And his expertise about politicians remains in force today. And fully explains the phenomenon Yatsenyuk.

True, Arseny Petrovich stayed in the premiership for two years ... This is a lot, many can hang on him, too much. Too many people are interested in him not being able to run far. And it’s not a fact that the US State Department itself is not interested in it and Payett locks it, then it is a sentence: to become a new sacred victim of the national revolution, but of a high level.

Ctrl Enter
Noticed oshЫbku Highlight text and press. Ctrl + Enter
We are
Ukraine changed the government. What to expect from the Groysman cabinet and what does Saakashvili have to do with it?Prime passion. Who will replace Yatsenyuk as prime minister of Ukraine?
Military Reviewin Yandex News
Military Reviewin Google News
38 comments
Information
Dear reader, to leave comments on the publication, you must sign in.