March 25 2016
66
This week, President Obama visited Cuba, actively covered by the American and world press. It is indicated that this is the first visit of the current leader of the United States for 88 years. A curious incident, in which the Cuban leader Raul Castro turned out his hand too much to the superpower president who had allowed himself, became a kind of illustration of American-Cuban relations, when one tries to use his hands and the other intercepts. Although without this symbolic case, it was clear only by the meager comments of the officials that a radical breakthrough in relations could not be achieved. The parties were rather cold about mutual initiatives, although they noted a marked warming in relations. 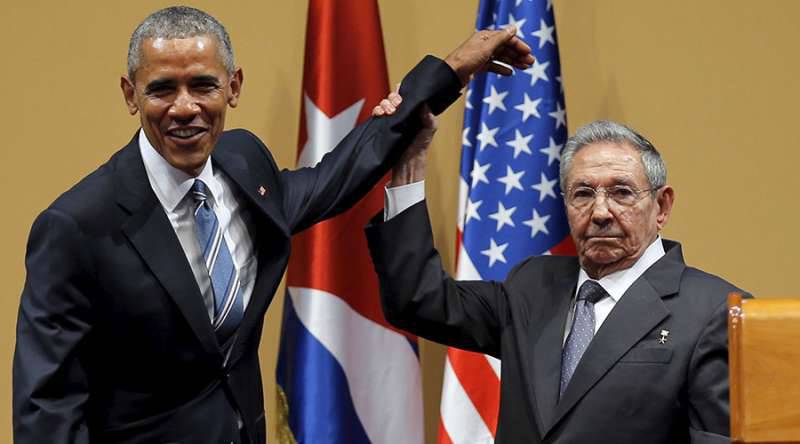 President Obama’s visit to Liberty Island had many opponents in the United States itself, and it would hardly have happened at any other time. But today, the current White House owner has almost nothing to lose - his rating is plummeting, and there is not much time left on the post. Outgoing history Barack Obama, obviously, set himself the goal of establishing primary bilateral ties, in order to then write down in the final asset at least the restoration of relations with such an important country as Cuba.

The leadership of Cuba is interested in a few simple things from the United States: lifting the trade and technological embargo, investment, and finally, the issue of Guantanamo. Solving these issues is not easy. Both sides are held captive by rigid ideological attitudes. The principle of the Americans: “You give us everything that we need, and in response, we will give something to you, but only what will be beneficial to us. And not immediately. Cubans can not agree to this. First, with unconditional surrender to the people, it will be difficult to explain how the current government differs from the long overthrown Batista regime. Secondly, even if the current leadership of Cuba completely bends under the demands of the Americans, Washington will still strive for a change of power on Liberty Island with the creation of its own client regime. So Havana will almost certainly not accept all the conditions of the States, and those, in turn, will uphold many of the sanctions.

Sharply separates the parties and the question of Guantanamo. Washington is strongly interested in maintaining its foothold in the region. Havana, on the contrary, is striving, if not to completely remove the base, then at least limit the duration of its facilities on Cuban soil. Guantanamo today remains a unique territory, the status of which is regulated not by modern international law, but by occupation-colonial treaties of a long gone era. The so-called "perpetual lease" has been operating since 1903 and the US military is unlikely to give up its right to use this land, because control of Guantanamo allows you to project power to the entire Caribbean region much more effectively than similar actions from southern Florida. In the United States, they have not forgotten the beating that their merchants arranged the fleet German submarines are on their own shores, as the Caribbean crisis remembers, so there is a reverent attitude towards the security of the "internal circuit". We must not forget that even the old colonial powers, which had greatly weakened in the post-war period, still have their possessions in the Caribbean. Such territories contain England, France and the Netherlands. Actively eyeing the region is China, which not only bears plans for its own transoceanic canal in Nicaragua, but is actively present in the same Cuba. In this sense, the desire of the American establishment to get the second unsinkable aircraft carrier in the Caribbean after Puerto Rico is understandable.

Base Guantanamo on the map.

In addition, Guantanamo is of exceptional value due to its dual status. On the one hand, this is the extraterritorial possession of the United States, to which American sovereignty extends. On the other hand, Guantanamo does not belong to the territory of the United States itself, where, for example, torture is prohibited. This ambivalence played a role in creating the famous Islamist prison, which has not been closed until now, although President Obama gave the appropriate order in 2009 year.

Among other things, Cuba is important not only in geopolitical terms, but also as one of the few remaining free markets, which is extremely important for the American economy. Especially, it concerns the consumer goods market.
However, whether the United States needs Cuba is still a big question. No, the islanders, of course, will not give up American investment and, as follows from News, American firms begin to gradually return to the island. This is an inevitable process. In general, changes were inevitable from the moment Raul Castro came to power, which significantly lifted a number of prohibitions, both for Cuban citizens themselves and for foreign tourists. But it is unlikely that Havana will decide after this and on political concessions for pro-American forces. Hardly anyone wants another “color revolution” there.

Summing up the visit, we can say that the Americans achieved what can be presented to the world as their limited success, after which Obama safely left for Argentina, whose new leader, Mauricio Macri, is a supporter of the alliance with the United States.