The lessons of the Soviet-Polish war 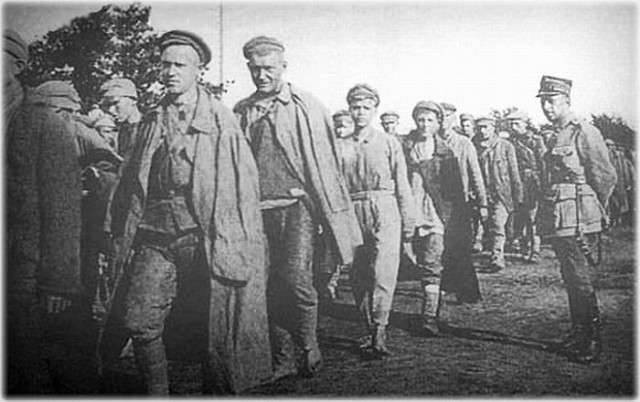 And now the Poles remember the events of those years very selectively.

The Bolsheviks with regard to Poland were more than loyal then, controversial issues could be resolved at the negotiating table. They were frustrated by the Polish leader Jozef Pilsudski, who had ambitious geopolitical plans and behaved in about the same way as the current President of Turkey.

From a sick head to a healthy one

Poland appeared on the political map of the world immediately after the end of the First World War. The ease of acquiring the state turned Pilsudski and other politicians around. They immediately rushed to push the borders of Poland in all directions.

Territorial disputes arose among the Poles not only with the Germans, but also with Czechoslovakia - because of the Teshen region, with Lithuania - because of the Vilnius region, with the Ukrainian People's Republic (UNR) - because of Lviv, Eastern Galicia, Kholm region and Western Volyn. Not surprisingly, in 1919 - 1920's. Belarusians and Ukrainians, Czechs and Slovaks, Russians and Jews, Lithuanians and Latvians saw aggressors, marauders and murderers in Poles.

Although Pilsudski has unleashed a war with Russia, some Polish historians such as the professor at the Torun University named after Nicolaus Copernicus Zbigniew Karpus, - in public speeches is called the aggressors of the Bolsheviks, nodding to the fact that in August the 1920 of the Red Army reached Warsaw.

It has long been known that the Poles have a kind of logic and a strange memory. As the writer Stanislav Kunyaev aptly remarked, "they will remember and repeat everything with all their benefits, with manic persistence. But everything that they want to forget is forgotten instantly." It is as if Polish historians do not know that telling about the Soviet-Polish war from the battle near the walls of the Polish capital is the same as starting the story of the Great Patriotic War from the Battle of Kursk or Operation Bagration.

It all started with the fact that from November 1918-th to March 1919-th Moscow with a dozen times unsuccessfully appealed to Warsaw with a proposal to establish normal interstate relations. Pilsudski regarded this as a sign of weakness.

In the spring of 1919, Polish forces armed with the Entente captured Kovel, Brest-Litovsk, Slonim, Pinsk and other Ukrainian, Belarusian and Lithuanian cities. The Red Army, fighting in the east of the country with the armies of Admiral Alexander Kolchak, and in the south with the forces of General Anton Denikin, had to fight with the Poles.

Who started the Soviet-Polish war, at that time, everyone knew, including the leaders of the Entente countries who publicly cursed the Bolsheviks. Here are just this knowledge, they exchanged among themselves behind the scenes.

On April 11, in a report to US President Woodrow Wilson, the US representative to the Entente mission in Poland Major General J. Kernan admitted that "although in Poland all the messages and conversations constantly speak about Bolshevik aggression, I could not notice anything like that. On the contrary I noted with satisfaction that even insignificant clashes on the eastern borders of Poland testified rather to the aggressive actions of the Poles and to the intention to occupy the Russian lands as soon as possible and to advance as far as possible. the swarm they succeeded in is proving that the Poles were not opposed by well-organized Soviet armed forces. "

All those who accuse the Bolsheviks in the attack on Poland, falsify history.

Words and deeds of "peddlers" of Polish culture

Like today, 100 years ago, the Poles were convinced that they were more cultured and civilized than their eastern neighbors. In this Polish elite was united. The long-time rival of Pilsudski, the leader of national democrats, Roman Dmovsky, glorified the “civilizational potential of great people” and considered the Polish ethnic element in Lithuanian, Belarusian and Ukrainian lands as “the dominant and only civilizational force capable of political organization.”

Practice disproved pompous words. 19 April Polish troops broke into Vilna. Among those defending the city was a member of the Military Field Tribunal of the Western Rifle Division Pole Witold Kozerovsky. Being wounded, he fell into the hands of the “peddlers” of Polish culture: “When he regained consciousness, I saw that one of the legionnaires was holding my wallet; after withdrawing money from him, he threw it under the stable frame. I was drenched in blood, without boots and overcoats , the wadded sweatshirt was torn, the cap disappeared somewhere. I groaned. One of the group of legionnaires who were standing nearby clicked the shutter and intended to finish me off, but he was prevented by a cry in Polish: "Don't bother, then komisazh" ...
Legionnaires, all guys up to twenty, listened to this advice, found somewhere a piece of barbed wire, twisted my arms back, firmly tied up with wire and, pushing me with blows of butts, led me to the city. My condition was terrible. "

Koserovsky was still lucky: he was not shot at the moment of his capture, he was not beaten to death in prison and did not die of hunger on the way to the camp.

About what happened in the Polish death camps in 1919 - 1922, I had occasion to write in the article "The Life and Death of Red Army Soldiers on the" Islands "of the Polish" Gulag ".

I should add that the Poles scoffed not only at prisoners of war, but also at internees. The same Kozerovsky described the order that prevailed in the summer of 1919 in the Wadowice camp:

"There were more than 8 thousands of people interned in this camp ... The regime was generally nightmarish. They were beaten all day and night. They were never beaten for the slightest disturbance of camp order, and they were beaten under every pretext of the imaginary camp violation of order and without any pretext ...

The food was disgusting ... They gave out a decoction of dried vegetables and a kilogram of bread per 8 person once a day, and nothing more. For a huge number of internees there was only one kitchen and one restroom ...

Women and children were taken out into the streets and forced to sing and dance ...

With such orders, food and mode it is not surprising that up to thirty people died every day. "

The fact that the Poles were in no hurry to improve the situation in the camps, confirmed Professor Madsen, a member of the commission of the League of Nations, who visited Wadowice more than a year later, in November 1920 of the year. Madsen called this camp "one of the worst things he saw in life."

96 has passed since then. During this time, the Poles did not bother to perpetuate the memory of Red Army men and other people from the territory of the former Russian Empire who were tortured in their camps. Now the Poles are destroying monuments to Soviet soldiers who liberated them from the Nazis and won them the right to life, and also demand that a monument to Polish President Lech Kaczynski be erected in Russia. But he harmed Russia, where he could.

Suffice it to recall that on August 12 of 2008, he flew to Tbilisi at the head of a detachment of friends of the President of Georgia, Mikhail Saakashvili, and publicly accused Russia of coming to the aid of South Ossetia for aggression. As political analyst Sergei Chernyakhovsky rightly noted, "Russia has no reason to keep the memory of Kaczynski and honor his enemy." Monuments to the enemies of Russia can be set only by their accomplices or idiots.

As Wrangel for Pilsudski zazrya "chestnuts from the fire" dragged

In the works on the Civil War, Soviet historians put Pilsudski in a common line of opponents of Soviet power. Meanwhile, he was not an ally of whites. In the same way, he was never an ally of the Reds. Therefore, we can agree with the biographer of Pilsudski, the Polish historian Wlodimierz Sulei, that the head of Poland "equally treated the two imperialist Russian forces, regardless of their color ... The internal struggle between them did not matter to him until it threatened Poland's interests."

It is indicative that in October 1919 of the year - at the climax of the confrontation between whites and reds - when General Nikolai Yudenich's troops were on the outskirts of Petrograd, and Denikin's troops rushed towards Tula, the Poles were inactive.

But they became more active at the beginning of 1920, when it became clear that the Bolsheviks would win the Civil War. 7 May Poles occupied Kiev left by the Reds without a fight. In the capital, the "mothers of Russian cities" was a parade of Polish and Petlura troops.

The invaders were in charge in Kiev for just over a month. Leaving the city, the Polish "civilizers" disabled the city sewage system, power station, passenger and freight station of the railway.

Not lucky and the city of Borisov. At the end of May, Polish artillerymen bombarded him with incendiary and chemical projectiles for two days. The city was almost completely destroyed, about five hundred civilians died, 10 thousand people were left homeless. The Soviet government announced this crime in a note from 2 of June 1920 to the governments of Great Britain, France, Italy and the USA. "Civilized West" responded to it in much the same way as in 2014, it met the information of Moscow about the shelling of the Kiev junta of the cities of the DPR and the LPR.

Reds drove the Poles to Warsaw. To stop the escaped troops, Pilsudski used detachments, which neither the Poles themselves nor their like-minded people in Russia and Ukraine ever recall.

“When the Bolsheviks attacked Warsaw, there was nothing there, only the police remained. Even the mail and telegraph were taken out,” testified the Polish communist Vladislav Ulyanovsky in September of 1920 at the IX Conference of the RCP (B).

Italian Ambassador to Poland Francesco Tommazini recalled that the Reds approached the Vistula so much that "they were stopped only 7 km from the river separating the city from the Prague suburb. This event caused strong excitement and a quick departure of the diplomatic corps from the capital, which now entered the theater military operations: cannon shooting was clearly heard, the roads were crowded with troops, and wagons filled with wounded were driven by, loaded directly from the battlefield for delivery to hospitals. "

And in this situation, the White Guards came to the aid of Pilsudski. On July 25, Peter Wrangel’s troops launched an offensive with the aim of defeating a group of Soviet troops in the Orekhov region and seizing Aleksandrovsk (now Zaporozhye) and Yekaterinoslav (now Dnepropetrovsk). 2 August Aleksandrovsk was whites taken.

A stab in the back was an unpleasant surprise for the armies of the Western and South-Western Reds fronts that stormed Warsaw and Lviv. On August 19, the Politburo of the Central Committee of the PKK (B) decided to recognize the "Wrangel front as the main one." It was then that the notorious “miracle on the Vistula” happened - the Poles defended Warsaw and launched an offensive.

It soon became clear that neither the Bolsheviks nor the Poles had the strength to continue the war. On October 12, the parties entered into an armistice and peace terms.

In just one month, the Red Army defeated Wrangel's troops and forced them to leave the Crimea. Baron didn’t wait for help from Pilsudski, from which he could draw a conclusion that is relevant for us: indulge the Poles and, especially, carry the “chestnuts out of the fire” for them under no circumstances ...

Ctrl Enter
Noticed oshЫbku Highlight text and press. Ctrl + Enter
We are
The internal springs of the Soviet-Polish warWestern Ukraine vs Poland: unsuccessful attempt of the Galician statehood
Military Reviewin Yandex News
Military Reviewin Google News
63 comments
Information
Dear reader, to leave comments on the publication, you must sign in.