Submit to the "de-occupation of Crimea", or How the "Mejlis" sell the coat of arms of the Crimean Tatars at an online auction

March 23 2016
23
When a person has a complex, most often it turns into a dominant for him, which passes all life processes through him. One of the brightest representatives of the group that literally cannot eat without discussing the theme of its main complex is Refat Chubarov, a representative of the so-called “Majlis of the Crimean Tatar people”, who is registered as a people's deputy of Ukraine.


"Military Review" published on the eve news the material that Mr. Chubarov, falling into snotty fabrications, told the correspondent of the Radio Liberty branch about how “the Russian army will flee from Crimea” and the current Crimean authorities “will run ahead of the Russian military”.

From the statement of Chubarov:
During de-occupation, the military will be the first to enter, public order will be maintained. Russia will leave Crimea, and those we call collaborators will run along with it. I do not know how many will be - one thousand, two thousand. All these Ilyasovs, Balbeki, Aksenovs, Konstantinovs ... They, probably, will run before the Russian military. Russia will leave the Crimea.

In Crimea, they decided to enter into an correspondence discussion with Mr. Chubarov. In particular, the person who Chubarov "sends from the Crimea forward of the Russian military" gave the comment to the statement of the "Medzhlis member". This is the Deputy Chairman of the Council of Ministers of the Republic of Crimea Ruslan Balbek, who knows firsthand how real it is to people like Chubarov, the Crimean-Tatar population of the peninsula.

Ruslana Balbek cites RIA News:
Chubarov declares to the whole world about the preparation of aggression against the Crimean peninsula. It is not a secret for anyone that all his praise troops can only reach the Crimean border, therefore all their terrible plans are in for a complete fiasco. No one dares to go further than the war to go to the Crimea.

Ruslan Balbeck, speaking of the "praise army", means the formation with which Chubarov and his comrades-in-arms are going to "win over" the Crimea from Russia. This formation is the so-called Noman Chelebigihan battalion.

It should be recalled that at the end of December 2015 of the "Noman Chelebigihan battalion" Chubarov counted "more 100 bayonets" - completely, you understand "Crimean Tatar patriots" ready to "return the Crimea." Later it turned out that to increase the degree of patriotism, everyone who wanted to join the “slender ranks” of the battalion Chubarov along with another collector of American grants (Mr. Dzhemilev) promised a stable salary (about 12 thousand UAH per month “on the snout”) plus bonuses depending from the activity that the "bayonets of the Majlis" will show.

It also became known that the “humanitarian battalion named after Noman Chelebidzhihan” began to receive “humanitarian” assistance from Turkish partners. So, as a New Year's gift, through one more “Majlis-style” Lenur Islyamov, the “battalion” received 250 sets of Turkish military ammunition. Representatives of the Gray Wolves terrorist group associated with the Nationalist Party of Turkey played a primary role in the supply of this ammunition.

From the statement of Mr. Islyamov, who decided to undertake obligations for the material support of representatives of the illegal armed formation (by the way, they try to promote this formation as part of the Ukrainian power structures):
The mission of this battalion is to strike in a manner where we can only know. We know all the trails and springs in Crimea. From the Crimean Tatars are waiting in the Crimea that we will bring his release. If we are told: wait 3-4 for the year internationally, we want this to happen in a year.

According to “Medzhlisovtsev”, the battalion, based in the Kherson region, is planned to attract 560 people who will be engaged in “fulfilling the tasks set by the General Staff of the Armed Forces of Ukraine”.

However, since Chubarov and Islyamov repeatedly mentioned in the material told about “the beginning of the manning of the Noman Chelebigihan battalion”, more than 3 months have passed, and the militancy of the battalion still does not go beyond the scope of the “Majlis” speech. Moreover, the fact that there is no clump more often comes out. Pan Ataman has a dime of gold ...

So much so that while Chubarov declares the readiness of the “battalion” to “de-occupy the Crimea,” Islyamov is selling battalion chevrons. Officially - to support the Ukrainian "Majlis" channel ATR. 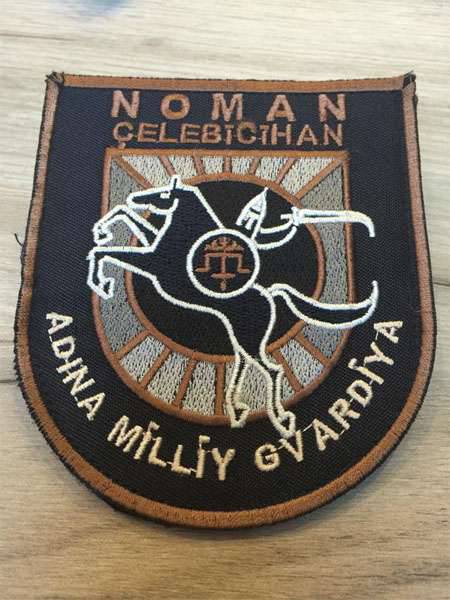 From Islyamov’s Facebook application:
Join the auction #saveATR. My lot is a collection chevron of the first Crimean Tatar battalion named after Noman Chelebidzhikhan.
Starting price - 1 UAH. Bets are accepted for 24 hours.

It is strange that Mr. Islyamov did not put up the Turkish ammunition that came to the Kherson region to equip representatives of the "battalion" for auction. 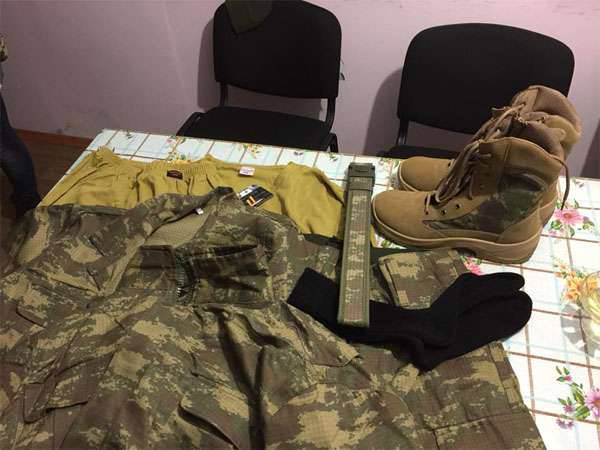 By the way, since February 3, the “Majlis people” do not publish any reports on deliveries of “humanitarian aid” from the Turkish “brothers”. Here, as they say, one of two things: either the Turkish "brothers" have become more stingy, or Chubarov and Co. cannot call in their "battalion" representatives of the rabble in the amount of more than 250 "pieces" - according to the number of Turkish sets ...

It seems that with “humanitarian aid” the “Medzhlisovtsev” have really serious problems. Apparently, the American grant of Dzhemilev came to an end, and therefore it is necessary to spin around in a griddle. To fill the budget with online commerce, Refat Chubarov himself decided to take over the “deocupator”. A few days ago in Facebook (at about the same time that Islyamov was selling a de facto non-existent unit with a sleeve patch) Chubarov published an announcement asking him to buy a “personal pen” from him. You will not believe, but - yes ... Pen ...
From Chubarov's record:
This pen was given to me for days in Turkey ... Not with a gold pen, but it writes superbly, in ink, a very soft pressure ... The peculiarity is personalized ...
Starting price 500 UAH. Bets are accepted for 2 days. 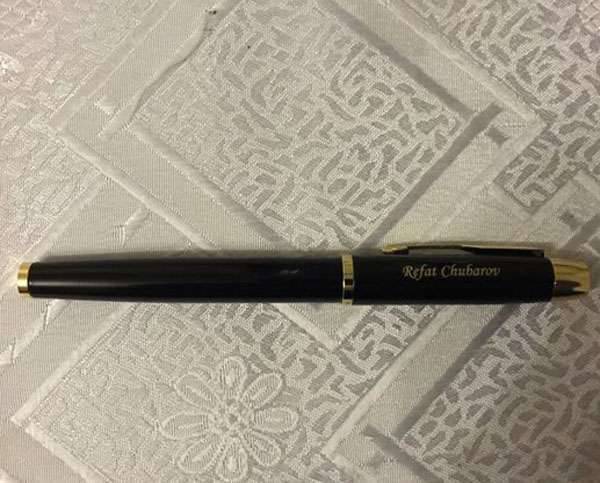 As you can see, in Turkey, instead of military ammunition, “Medzhlisovtsy” now give souvenir pens ... Like, sell - buy yourself something for “de-occupation”. Or is there something in the style: "Refat, write letters ..."

Decided not to depart from the trend and Mr. Dzhemilev. In order to “de-occupy” and support the mouthpiece of “Medzhlis” propaganda, he decided to sell the coat of arms of the Crimean Tatars at an online auction (note!). All in turn! Everything ... And the Crimean Tatars themselves would be sold! 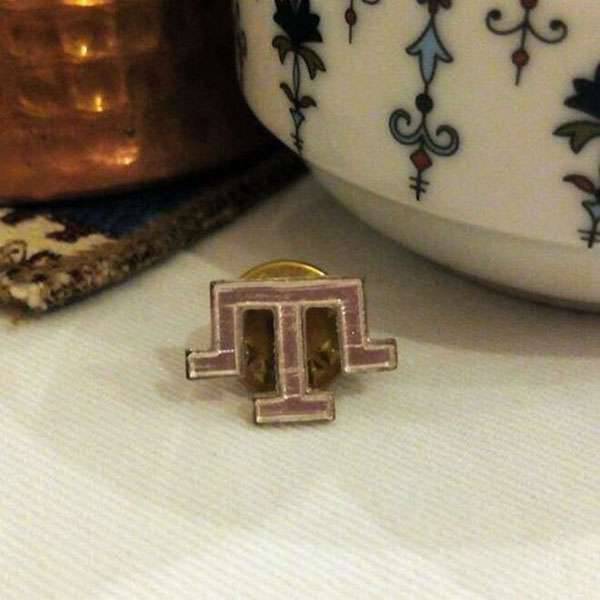 From the statement of Dzhemilev on Facebook:
My lot is a silver tamga badge - the emblem of the Crimean Tatar people. Starting price 1000 UAH. Bets are accepted during the day. All funds will be transferred to support ATR.

Interestingly, it’s going to put your suit “for growth” and shoes “Tread of the Majlis” Dzhemilev for an auction for “de-occupation”? .. In principle, this is not important. It is important that Dzhemilev, Chubarov, Islyamov and Co. long ago sold their souls to overseas instigators of the Ukrainian Maidan, and sold without holding any auctions ... And now sellers of their own souls are trying with all their might to remind themselves once again to those who decided in Ukraine to bet on the sales riffraff of various suits.

Ctrl Enter
Noticed oshЫbku Highlight text and press. Ctrl + Enter
We are
Russia, Turkey and the "Crimean Question"The head of the Moscow community of the Crimean Tatars: "Russian - former slaves, hereditary slaves." On the threat of the revival of the Crimean Tatar predator
Military Reviewin Yandex News
Military Reviewin Google News
23 comments
Information
Dear reader, to leave comments on the publication, you must sign in.