It seems that bananas ripen in Donetsk ...

March 21 2016
66
Immediately make a preface-remark. This article is not intended for those who live in the DPR. They already know. And not for those who consider living in the NPT without exception idiots and terrorists. Although, of course, this category is already happy in the comments to this video on the Internet. This material is intended primarily for those who can really have an impact on the situation. That is, it will make at least some think those who are trying hard to prove to the Russian audience that everything is just fine in the DPR. And those who can really settle the situation. Ladies and gentlemen, well, it's time to do something.


There is nothing to comment on. Another example, not mounted, not sucked from the finger, about the labor exploits of the deputies of the People's Council of the DPR. The impression is ambiguous. Whether "hello, nineties", or bananas really began to ripen in Donetsk, and the republic is rapidly running wild. More precisely, its top is running wild.

Well, if the leader of the public movement "Donetsk Republic" behaves so modestly, it is frightening to think that his subordinates of a lower rank get up slowly. With such a roof ...

You know, by and large, frauds are not so important, which are constantly whispered in the DNR around the kiosks with social bread and food produced by the Russian Federation. 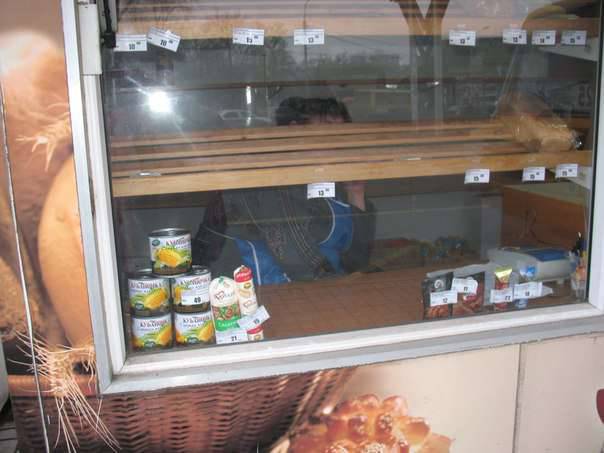 In fact, these stalls, which are called the “Harvest” brand, receive products from TD “Donbasskhleb”. And he, in turn, from Russia. In the form of humanitarian aid, as it were. But for some reason, the kiosks are not located where the people most affected by shelling live, but closer to the center of the city. Where the density of residence and more, and commercial benefits, respectively.

And all these products are distributed on a commercial basis, without declaring their humanitarian origin. That is for the money.

Funny coming out. We (Russia) give money, small for one person, so that a person can live. Just live. And we give products for free. So that those who, for one reason or another, cannot live, but must survive, can do it.

But for some reason people are forced to exchange part of these products for the very money. That is, to buy what they have to give out and so. But, as I was informed, to issue a receipt of humanitarian aid today is a very, very difficult question. Indeed, how can he be simple if part of the humanitarian aid is simply stolen and then sold? Moreover, all this happens under the patronage of such high-ranking officials as Koval.

In general, everything is great organized. The official media will be silent, because they are under Aunt Pushilin’s firm hand. Any protest is prohibited, because the type of martial law. Who and how can guard the so-called law enforcement agencies, it is known. According to the principle of "Raven to the raven ..." In general, the lepotatu and the fullest scope for personal enrichment for those who successfully pushed to the top.

And what about the good tsar-father, whom even my informants gently suggest not to touch? Say, he does not know. He is surrounded by people who misinform him, our man, honored and injured for the republic.

Yes, the fact that Zakharchenko is a man deserved and shed blood for the republic is an indisputable fact. As well as it is quite possible that organisms such as Orlov or not to the nights of Major Sasha and her mommy, he is not informed in the right way. Quite possible. Especially when you consider the fact that Zakharchenko is not a particularly politician. Although as a leader Akhmetov took place. Led the same network "Continent", and this is still the largest network of hyper was with that power. And, quite possibly, in that structure his thieves were many times smaller.

Even sure that less, if ever. Because the higher authorities, firstly, had a place to be, and secondly, 100% controlled their subordinate. Immediately everything is a little different.

Work at Akhmetov is not a reproach. 80% of the population of Donbass worked for this person. And it is easier to find someone who received a salary from Akhmetov than someone who did not receive. Donbass had a Master, and that says it all.

But today it turns out that in the DNI another owner. And this, oddly enough, is not the people of Donbass. And some of his representatives, seemingly as "chosen by the people." But the elected ones according to the lists of parties, that is, the party has received a certain number of seats, and who will sit in these places is up to her.

How this is solved, we have already had the opportunity to see the example of Purgin and Khodakovsky. In the best traditions of mayhem. But one thing is to backhill a document retroactively, abolishing the Security Council, which never really responded to the entire period of its existence, and quite another to open and fully executed lawlessness in the performance of "people's choices."

The point is not in kiosks selling humanitarian aid.

Koval is (if at all) represented by the colonel and deputy Zakharchenko.

And now it is already impossible to pass by this, despite all the attitude to the Donbass. Or, if you want, precisely because you don’t give a damn about Donbass and you simply cannot forget.

And Mr. Zakharchenko, honestly, it’s time to return from the beyond the clouds and pay attention to what is happening under his nose. This is if he really does not know.

Because bananas in Donetsk are already ripening. What does it have to do with bananas, reasonably ask? And because Somalia.

Ctrl Enter
Noticed oshЫbku Highlight text and press. Ctrl + Enter
We are
ARMY-2016. Preface to understandResults of the week. “I respect you, and you respect me, we are dear people”
Military Reviewin Yandex News
Military Reviewin Google News
66 comments
Information
Dear reader, to leave comments on the publication, you must sign in.