Syrian army and opposition are leading the biggest battle 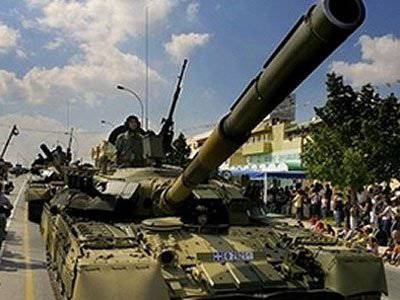 In Syria, a fierce clash broke out between the opposition and the country's armed forces outside the city of Busra al-Harir, which is located a few kilometers from the border with Jordan. Local media reported that these hostilities are among the biggest in the nine months of the conflict between the forces supporting the regime of Syrian President Bashar Assad and activists who are unhappy with his power. The incident raises a large number of questions in connection with the December 12 election to the local administration. The holding of the elections was to prove the good intentions of Assad, as well as his readiness for dialogue with the opposition.


The British news agency Reuters reports that, in the cities of Busra al-Harir and Luja in the south of the country, anti-government protests since December 11 have been suppressed by servicemen of the 12th Armored Brigade. Several dozens entered the border area with a brigade tanks. The city of Isra, located 40 kilometers from the Jordanian border, was used to house the division.

According to the Arab television channel Al-Jazeera, the Syrian army launched the attack on Busru al-Harir from tanks and heavy machine guns in the evening on December 11. The shelling was a retaliatory step at the beginning of a major anti-government strike, which took place in the morning of the same day. Her conduct actually paralyzed the city: most of the institutions and shops stopped working. The organizers of the strike want to put economic pressure on the authorities. They argue that the action will continue until January.

Cities now defended by government troops are considered to be strongholds of anti-government forces. They are located in a mountainous area which makes it impossible to use heavy armored vehicles or carry out a frontal infantry offensive. Anti-government militants and defectors from the army of loyal Assad from Lujah repeatedly attacked the lines of communication of the armed forces of Syria.

Human rights organizations that monitor the Syrian situation, cite evidence that at least 11 December killed at least 18 people, and at least two infantry vehicles were destroyed. Data on the wounded yet.

The incident at Busra al-Harir has a negative impact on the opinion on the elections to the local administration, which are to be held on December 12. In the 14 provincial administration, approximately 17 Thousands of Deputies should be elected by the Syrians.

Initially, the Syrian authorities wanted with the help of the elections to show the effectiveness of the reforms of President Assad, the beginning of which he announced in August. The policy of reforms by Damascus was taken after anti-government protests in the country took a serious turn.

Elections to the local administration used to take place on the system of closed lists. This guaranteed 50% seats for members of the National Progressive Front which is a government coalition headed by the ruling Baath Party. December 12 closed lists have been canceled.

However, foreign media operating in Syria report that voter turnout is likely to be very low. In addition to the onset of pro-government troops in the south, the Syrian armed forces warned of the start of operations in the city of Homs, which is located in the east of the state. A strike was also launched in this city at the weekend.

The Assad government insists that the armed forces protect the people from a dangerous uprising, funded by foreign powers. At the same time, the opposition claims that hundreds of thousands of people who are not willing to endure the dictatorship of the president are against the army. Navi Pillay, the UN High Commissioner for Human Rights, who visited Syria in early December, stated that the country has all the hallmarks of a civil war. According to the UN, more than 4000 people have already died as a result of the conflict.

Egyptian news agency MENA announced that on August 17 on Saturday, the member states of the Arab League will decide on the next steps regarding official Damascus. In particular, this international pan-Arab organization will consider Damascus’s written response to the demand to stop the brutal suppression of demonstrations. In the Arab League, Syria’s membership was suspended on November 16. December 4 League has put forward an ultimatum to Syria: either Syria stops persecuting the opposition and proves it to foreign observers, or economic sanctions are imposed against the country.

6 December Damascus announced acceptance of the Arab League requirements, but at the same time it put forward a number of conditions. Among other things, Syria demanded its return to the League, the immediate lifting of the sanction, and also that the observers strictly coordinate their actions with the authorities of the country. In comments to the press, the representatives of the Arab League described the conditions of Damascus as counterproductive.
Ctrl Enter
Noticed oshЫbku Highlight text and press. Ctrl + Enter
We are
Reports from the militia of New Russia for 27-28 September 2014 of the year
34 comments
Information
Dear reader, to leave comments on the publication, you must to register.