Who defended the Paris Commune. What was the National Guard of the Communards?

March 18 2016
35
18 March 1871, exactly 145 years ago, in the French capital Paris, an armed popular uprising took place, which resulted in the proclamation of the Paris Commune. Having existed for two months, the Paris Commune is viewed by historians and political leaders of the left as the first example of the “dictatorship of the proletariat” put into practice. Since 1872, 18 March is celebrated as the Paris Commune Day. Naturally, such an event as an armed uprising in the capital of one of the strongest European powers could not be ignored by the classics of world socialist thought. Of course, this topic was addressed by Karl Marx, Friedrich Engels, Vladimir Lenin. 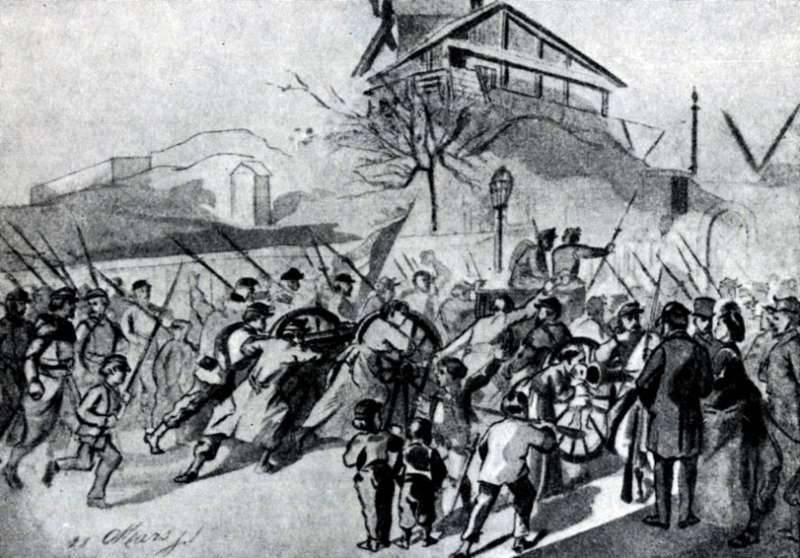 Marxist, socialist, anarchist authors wrote about the Paris Commune. And as one of the important reasons for the defeat of the commune, many of them noted the military weakness of the rebels. The revolutionaries did not succeed in creating a combat-ready armed force that could withstand their political opponents — the Versaillese, not to mention the Prussian army — the strongest in Europe, which stood then at Paris itself. Below we will talk about what the armed forces of the Paris Commune were in the two months when Paris lived under the red flags.

As one would expect, after the seizure of power in Paris by the revolutionary forces, they immediately faced the most difficult issue of organizing the defense of the commune. In fact, only armed detachments of the proletariat and the lumpen-proletariat were united to the National Guard, but did not have either strong discipline, or a developed organizational structure, or an adequate level of military training. If the Paris Commune had more organized armed forces, it is likely that events would have developed in a different way.

29 March 1871, by decree of the Paris Commune, the regular army and general conscription were abolished. Karl Marx in his work “The Civil War in France” writes that since the Commune was viewed as the basic form of political organization of French society, from the village or city block to the entire state, the regular armed forces were subject to dissolution as a mechanism of power of the pre-revolutionary government, and functions were transferred to the people's militia — the armed people.

In the early days of the Paris Commune, its armed forces were represented, firstly, by the National Guard, recruited on a voluntary basis and consisted primarily of Paris workers, and secondly, by small volunteer detachments of revolutionaries who had a clearer discipline and ideological motivation. The National Guard was created in 1870 for the defense of Paris, however, since it was staffed with workers and artisans, it was an extremely unreliable force for the pre-revolutionary government. Actually, it was the absence of regular army units in Paris, replaced by the National Guard, which allowed the Communards to take power into their own hands. From the 270 of the National Guard battalions stationed in Paris, the XMNUMX battalions switched to the side of the Commune.

Thus, the number of personnel of the National Guard, who had sided with the Communards, reached 100 thousand people. Units of the National Guard were recruited on a territorial basis, so the neighbors in the quarter were in the battalions and companies. Friedrich Engels, describing the level of discipline and combat training of the National Guard, noted that discipline depends, first of all, on the personal authority of elected commanders. As for the level of combat training, Engels drew attention to his weakness, the lack of an adequate number of professional soldiers capable of organizing full-fledged training units. The most ideologically motivated were battalions staffed by workers - residents of Paris suburbs.

At first, military leadership in the Paris Commune was carried out by 47-year-old Gustav Paul Cluseret (1823-1900) - a professional military man, a graduate of the famous Saint-Cyr military school who participated in the Crimean War, and then a volunteer in the army of Giuseppe Garibaldi and who fought during the Civil War US war as part of the army of the northern states, where he rose to the rank of general. Cluserere (in the photo) expected to turn the National Guard into an army of numbers in 50-60 thousand bayonets, but he could not fulfill this task. First of all, he was confronted by the “anarchists” who defended the need for volunteering and election in the organization of the National Guard.

The leadership of the Commune realized the weakness of the National Guard legions by the end of March 1871. First of all, it became obvious that it was impossible to use units of the National Guard outside Paris, which excluded the possibility of conducting full-fledged military operations against the Versailles troops. Therefore, it was decided to reorganize the National Guard. 5 April 1871, in the face of increasing threats from the Versaillese, the Commune decided to impose a universal conscription. In addition, the National Guard was divided into field troops and local troops. The field troops included maneuverable battalions and were staffed from single Parisians aged 17 - 35 years. They were intended for the conduct of hostilities outside the city. Local troops consisted of territorial battalions and were staffed by married residents of Paris and people older than 35 years.

However, given that the majority of Parisian men were married men, 60% of personnel were actually excluded from the National Guard after the reorganization. Moreover, unmarried young men of 17-20 found themselves in maneuverable battalions for years without combat experience and military service experience, while adult men turned out to be members of local battalions. However, the leadership of the Commune almost immediately realized its mistake. Already on April 7 a new decree was adopted, amending the organizational principles of the National Guard. Now, the maneuverable battalions began to call and married men, and the age of service in them was raised to 40 years. But this system of recruitment did not lead to strengthening, but to disorganization of the National Guard, since the battalions already manned were destroyed.

As a military delegate to the Commune, Clusere was replaced by 27-year-old Louis-Nathaniel Rossel (1844-1871), who previously held the post of chief of staff of the National Guard. Like Cluseret, he was a professional soldier - Colonel of the engineering service of the French army. Member of the Franco-Prussian War 1870-1871, Rossel adhered to patriotic convictions and precisely because he joined the Commune, considering it to be more patriotic than the government of “capitulation generals”. From 22 March to 2, April Rossel commanded the XVII Legion of the National Guard, then headed the headquarters of the National Guard. 30 April, he replaced Clusere as the military delegate of the Commune. 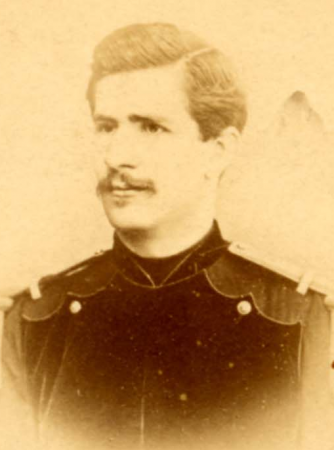 Rossel planned to create, in addition to the militia - the National Guard, a small maneuverable and regular army, and if the National Guard was recruited on a territorial basis, the Rossel planned to build maneuverable units in accordance with the rules of military science, having formed not legions, but full-fledged regiments with the clearest hierarchy and maximum restriction of election of bosses. For this it was proposed to choose the best battalions of the National Guard. The composition of the regiment numbering 2 thousand people were to include five battalions, each - with one artillery gun. Total Rossel hoped to create 8 regiments that would be combined into a maneuverable corps. However, as was to be expected, Rossel’s plans were opposed by the Central Committee of the National Guard and the elective command of the legions and battalions.

By the beginning of May 1871, the size of the National Guard was determined in 6500 officers and 162 th. Ordinary soldiers. The maneuverable battalions served as 3413 officers and 85 thousand soldiers, in local battalions - 3094 officers and 77 thousand soldiers. But in reality, the number of actually operating troops of the Commune was significantly lower. So, the Prussian military command spoke about 48 thousand ordinary soldiers and 2225 officers. Many soldiers were listed on the National Guard only on the lists, but in reality they did not serve and did not take part in the hostilities and the defense of Paris. General Yaroslav Dombrovsky was in command of the most efficient units of the National Guard, but under his command no more than 6 thousand soldiers served, even if they were distinguished by high fighting spirit and ideological motivation. After the Paris Commune was suppressed by the Versailles, about 25 thousand communes were captured, and another 30 thousand people died during the defense of Paris. Based on these figures, one can imagine an approximate number of National Guard personnel - about 60 thousand people.

As we noted above, a very important problem of the National Guard was the lack of qualified officers. In reality, the guard served no more than a hundred officers of the old French army, and the revolutionary commanders, despite their personal courage, had large gaps in military knowledge and could not establish good training of personnel. The most obvious lack of qualified personnel manifested itself in those branches of the military, where there was the greatest need for commanders with special education. So, according to the lists, the 2500 man served in the artillery of the Paris Commune, but in reality only 500 gunners participated in the defense of the city. At 500, the man was only an 2 officer — an artillery officer with a military education.

The weakness of the National Guard was explained mainly by the "infantry" composition. The cavalry units of the National Guard were very weak - the Commune managed to form only three squadrons. Moreover, on May 3, it was decided to dismiss them, because in the barricade battles the cavalry was useless. As for the engineering troops, the Commune had only one engineering battalion consisting of 9 combat engineer and 1 electrical engineering companies. However, at the disposal of the Commune were 5 armored trains, an aeronautical squad designed to provide Paris with the outside world, and a river flotilla on the river Seine with 1 floating armored battery, 5 gunboats, 6 steam boats and 1 yacht. 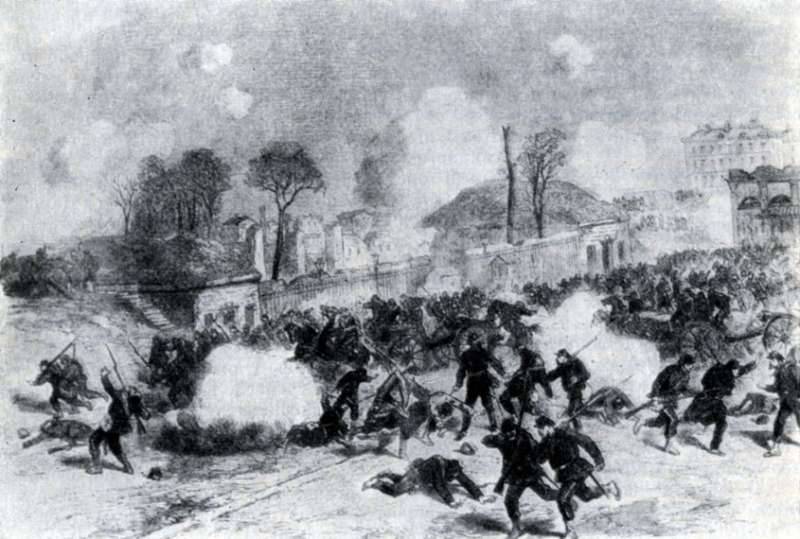 But the main drawback of the National Guard was the extremely low level of discipline. In fact, the guardsmen participated in the battles, if they wanted to, and if they did not, they did not participate. The participation of battalions and companies in the fighting was entirely voluntary. Units were distinguished by the fluidity of personnel. And, nevertheless, it is impossible not to pay tribute to the defenders of the Paris Commune in their ideological and courage. Thousands of national guards fought to the last and fought well, despite the weak military training or lack of it at all. Even the teenagers of 12-13 took part in the hostilities, striking with their courage not only colleagues, but also the enemy.

21 May 1871 The Versaillese forces were able to break into Paris through the half-destroyed Saint-Cloud gate. A week of barricade fighting continued on the streets of Paris, until 28 May Versailles troops could not suppress the resistance of the defenders of the last Communion barricade on Ramponot Street. The Paris Commune ceased to exist, but its political and military experience was subsequently used by revolutionaries in many countries, including during the October revolution of 1917 in Russia.