Estonian President: Russians were a nation of gentlemen 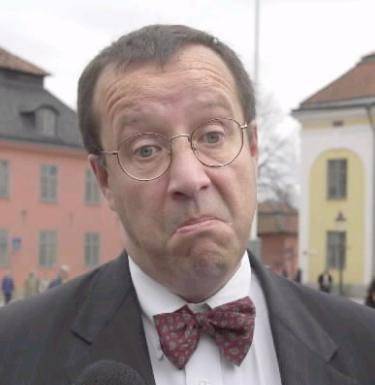 Estonian President Toomas Hendrik Ilves, in an interview with the Swiss publication Der Bund, once again spoke about Russians and Russian in Estonia. This is reported by the Estonian edition Day by Day "

Responding to a remark by a journalist that Estonia’s relations with its eastern neighbor are hampered by the fact that about one-fourth of Estonian’s population are native speakers of the Russian language and belong to a less socially protected class of society, the president said that Russians in Estonia had long been a people of gentlemen and had privilege. "Now, since they no longer have privileges, some people see it as a loss," Ilves said.

Ilves also answered the question of why Russian is not an official language in Estonia. “Why should it be? For example, we are occupying your country, and after 50 years we say that you have to make Estonian the state language. Occupation power seizes the country, deports hundreds of thousands of people to Siberia and sends its people here. And now we finally gained independence, should the language of the occupying power be the second language of the country? Do not ask me ridiculous questions! My advice is that people of Russian descent should worry about Estonian citizenship. "

As REGNUM reported earlier, this is not the first statement by Ilves about the Russian language. In the 2008 year, he replied in an interview with a BBC correspondent why the Estonian president not speak Russian, which is spoken by more than a quarter of the country's population, replied that this is impossible, since it would mean accepting the 50-year cruelty of the occupation, Most Russian speakers were brought to Estonia only after the occupation of the country by the Soviet Union at the end of the Second World War, the president said to the BBC correspondent.

Recall that Ilves is the first president of Estonia, who does not speak Russian. In addition to possession of Estonian, English and Finnish, the president, at public expense, is studying French. His maternal grandmother was from St. Petersburg.

Help REGNUM. Virtually all of the current ruling elite in Estonia occupied fairly high positions in "occupied Estonia." So the current Prime Minister Andrus Ansip was an instructor of the Tartu City Committee of the KPI, and according to Estonian media, he actively participated in dispersing the anti-Soviet demonstration of students in Tartu in 1988. The former president, Arnold Rüütel, was chairman of the Presidium of the Supreme Council of the Estonian SSR and a member of the bureau of the Central Committee of the Communist Party of Estonia. In his youthful years, Estonian Defense Minister Mart Laar headed the Komsomol district organization in Tartu. Education Minister Jaak Aviksoo, under the "occupation regime", has made a brilliant scientific career. Ex-commander of the Estonian Defense Forces Ants Laaneots under the "occupation regime" rose to the rank of colonel of the Soviet army, participated in the civil war in Ethiopia as a military adviser from the USSR. The mayor of Tallinn, Edgar Savisaar, was the deputy chairman of the Council of Ministers of the Estonian SSR in Soviet times and the head of the State Planning Committee.