War as a way to save Ukraine

March 17 2016
77
Many readers today are thinking about why Ukraine is moving further and further away from the Minsk agreements. Why, no longer hiding, both sides use heavy weapons. Why the soldiers, who do not want to die at all for something distant and incomprehensible like the EU or NATO, are going to die again. 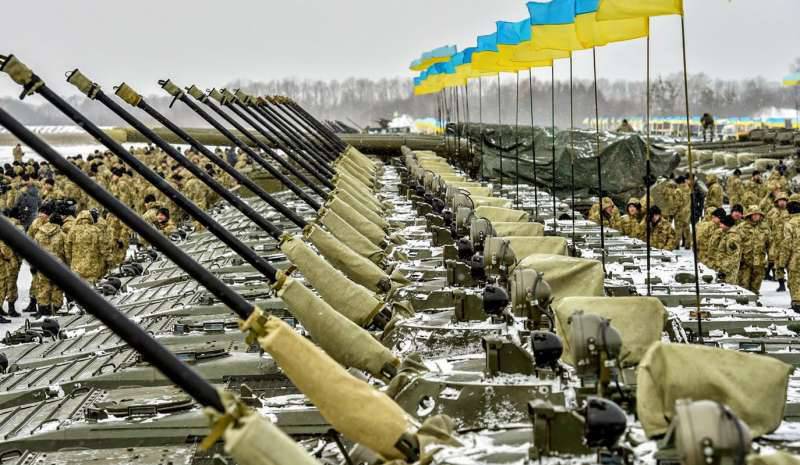 For most, it is clear that the very idea of ​​the Minsk agreements was questionable. And they themselves are not concluded in order to somehow resolve the conflict. Agreement - a measure forced on both sides. Republic, as well as Kiev, could no longer advance. Both armies were weakened.

Remember the reproaches of the militia-why not take Mariupol? Why not continue the offensive? The answer is just in the Minsk agreements. Desire for war cannot always be fulfilled. Any desire must be supported by force.

So today we see a stalemate. Execute the Minsk Agreement for Poroshenko will mean a complete reformatting of the country.

What is a constitution change? It is nothing but a complete change of the system of government. So, to create on the site of the existing Ukraine a completely different state. The federal structure will, first of all, deprive the president and the government of a huge part of the powers. Kiev will no longer be able to dictate its conditions to the regions.

If you track the Ukrainian regional press, you can see a clear activation of the separatist sentiment. What was in the USSR before the collapse. Remember, Ukraine is the breadbasket, Uzbekistan is cotton, the Baltic States are Europe ... It was then that the Ural Republic, the Siberian Republic and others appeared completely delusional.

Ukraine today "breathes" about the same. Every region is trying to become the breadwinner of everyone else. And it is on this today that the right play. This position is occupied by many ministers and deputies. We are working, but ...

Why? Yes, simply because the EU is already openly talking about sabotaging reforms. They have already openly indicated to the president and the prime minister that the Russian occupation is delusional. And these conversations reinforce the failure of the next loan.

The rhetoric of Europeans, and of Americans, has clearly changed. Somehow the talks about peacekeepers, about the rearmament of the Ukrainian army, about new sanctions ended. Automatically extended old and all. Already loud voices about the lifting of sanctions for Russia. Too expensive pleasure, it turns out, to threaten Russia.

All that is written above has long been known. And analysts "sucked" this topic from all sides. They were able to drive the Kiev authorities into a corner. More precisely, she herself with pleasure made this “corner” to herself. And then what? What can come up with in Kiev and Washington to maintain the power of the existing president? Diminish the mental abilities of these guys are not worth it. So far, they clearly perform the task. Ukraine's economy is ruined. The people, in the majority, are anti-Russian. Sovereignty is almost lost. Small strokes remained.

In the Ukrainian press slipped some interesting interviews. For now, as a sounding of public opinion. But I think that soon it will be heard as the official position of the Ukrainian authorities. In particular, Stanislav Rechinsky, adviser to the head of the Ministry of Internal Affairs of Ukraine, on his Facebook page directly wrote:

"Apparently, our way to the EU lies through the 100-percent protectorate. We have not formed our management elite, which means that others will form it."

"Alas, we need occupation. And not Georgian, but preferably German. Years on 50."

Is amazing? Unfortunately no. Rather, the natural result of the domestic and foreign policy of the leadership of Ukraine. Everything that Ukrainians were talking about on the Maidan turned out to be smoke. Ukrainian products in European markets? And they are needed by Europeans ... Accession to the EU? Well yes. Sometime later. If the EU still will exist. Strong economy? And who needs competitors? Visa-free regime? What for? Those who are rich will get a visa for money, and there are plenty of poor people in the EU today without Ukrainians.

So why? Why give the country to others?

I think the answer is that only this situation will allow the existing characters to retain power. Slaves need to be fed. And this should mean constant lending to Ukraine. It is clear that rich slaves are not. But do not die of hunger. But the supervisors live very well. Rich and free.

There is only one difficulty for Kiev. Europeans, Americans, and Russians do not want to occupy Ukraine. Do not want to feed the slaves. Yes, and slaves do not want to have. Not profitable this business - the slave. The world economy has long abandoned such a relationship. A free man is much more profitable. Only profit, and takes care of itself.

For Kiev, there is only one way to force yourself to occupy. And this path, albeit a savage one, is quite real. This path is an escalation of military conflict. Until the transfer of hostilities to other regions. In other words, full-scale civil war. With a lot of casualties and destruction. To the blood poured river. To the Internet was filled with horrific photos of victims of war.

And then, whether the leaders of European countries want or don’t want it, they will be forced to introduce peacekeeping forces into Ukraine. Naturally, the territories of the LDNR will be controlled, and therefore fed, at the expense of Russia. The rest of the territory - the EU countries. And the power, albeit with the loss of some of its functions, will continue to belong to today's “superiors”.

True, the balanced position of the LDNR leaders still does not allow to fully implement this plan. The army responds adequately to the provocations of the Ukrainian security forces and terbats. But do not go on aggravation. And the offensive is difficult to organize. Too long truce allowed to create a sufficiently thought-out defense. And the overcoming of such fortifications is associated with large losses.

So spring aggravation is not a surprise. Aggravation is quite predictable. And no desire to "world community" fighting will not stop.

Stopping the fighting, paradoxically, means the disappearance of the existing Ukraine and the emergence of another country. The war that is needed to survive. Strange, but it is.

Ctrl Enter
Noticed oshЫbku Highlight text and press. Ctrl + Enter
We are
Situational analysis of the death of the MH17 flight (Malaysian Boeing 777), made on the basis of engineering analysis from 15.08.2014Memo to mercenaries in Africa
Military Reviewin Yandex News
Military Reviewin Google News
77 comments
Information
Dear reader, to leave comments on the publication, you must sign in.