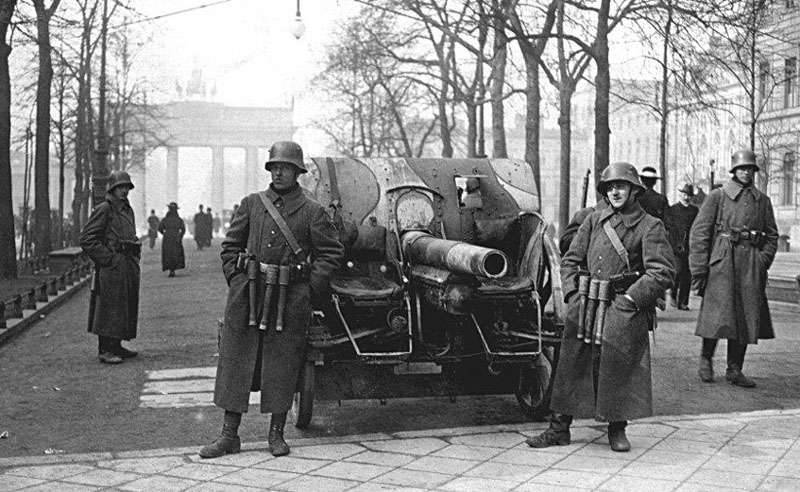 96 years ago, 13 March 1920, rebels led by General Walter Luttwitz and Prussian landowner Wolfgang Kapp took Berlin without a fight. The troops of the Moscow garrison refused to carry out the order of the Minister of War Gustav Noske and to give armed resistance to the rebels. The chief of staff of the Reichswehr, General Hans von Sekt, stated that "German soldiers will not shoot at German soldiers," ordering his subordinates to remain in the barracks.

Left without protection, the leadership of the Weimar Republic, headed by President Ebert and Prime Minister Bauer, fled to Stuttgart. Having seized the capital, the rebels formed their government, which was headed by Kapp. The new government announced the dissolution of parliament, the resignation of the president and the refusal to comply with the Versailles Treaty. However, the overwhelming majority of German politicians, parties and regional authorities refused to support the coup. The bulk of the population also opposed the coup, fearing the establishment of an authoritarian military dictatorship in the country.

At the call of the trade unions and left-wing parties, a general strike spread to Germany, and the formation of the Red Army began in the Ruhr area, in which 80 thousands of workers and employees were enrolled in a few days. Red Army soldiers took control of a number of major cities, including Düsseldorf, Duisburg and Essen. The orders of the Kappa Cabinet were ignored everywhere, and soon the rebels realized that no one obeyed them outside Berlin. Instead of the promise by the putschists of restoring order and the revival of the greatness of Germany, there was a paralysis of power in the country.

Seeing that events become catastrophic, threatening a full-scale civil war, the German generals made their choice. On March 17, a group of high-ranking officers appealed to Kapp and Luttwitz to demand the resignation of power and the return of power to the legitimate government. Realizing that the game was lost, the leaders of the rebellion ordered the dissolution of their armed formations and fled to Sweden on the same day. Thus, the Kappa-Lutwitz regime lasted less than four days.

In this stories There is one very interesting point. The main striking force of the putschists was the 2-I brigade of marines under the command of Corvette-Captain Hermann Ehrhardt, which was usually called simply the Brigade Ehrhardt. A distinctive sign of this compound numbering about six thousand people was a swastika. She sported a soldier's helmets, car and armored cars belonging to the brigade.

Thanks to journalists, photographs of erhardians with huge swastikas on their foreheads became widespread and it was then that this symbol, previously considered politically neutral, began to be perceived as an emblem of extreme right, anti-liberal and revanchist forces. Four months later, the hackenkreuz became the official emblem of the Nazi Nazi Party, and its use by the putsch undoubtedly influenced this choice. And on the screen saver - one of the guns of the rebels at the Brandenburg Gate. The soldiers posing near him were not part of Ehrhardt’s brigade, so the swastikas were not there. 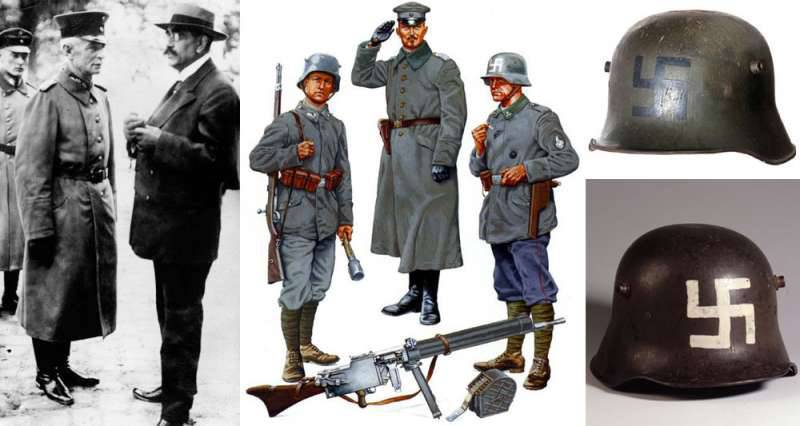 Left: General Walter Luttwitz and Minister of Defense of the Weimar Republic Gustav Noske. The picture was taken before the rebellion, so they are quite calm talking. Center: participants in the Kappa Luttwitz insurgency. In the middle is Hermann Ehrhardt, and next to him, with a cigarette and a distinctive emblem on his helmet, is a soldier of his brigade. Right: Ehrhardt helmets. 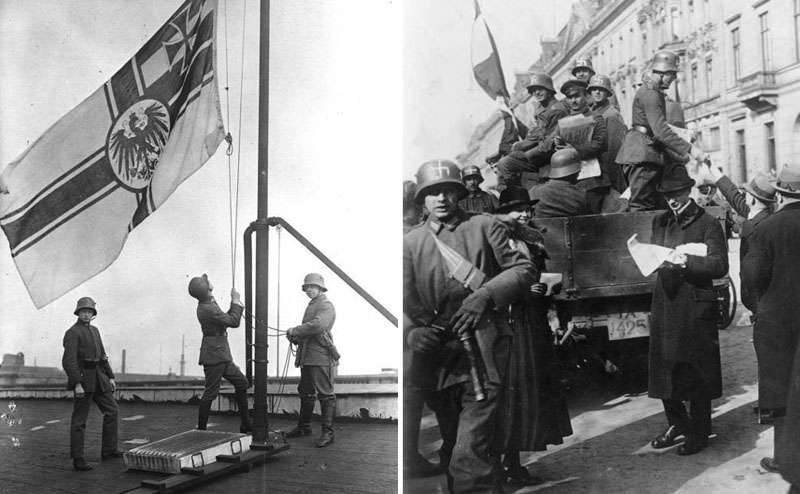 Left: putsch hoisting the naval flag of the German Empire over Berlin. Right: erhardt people distribute their appeals to Berliners. 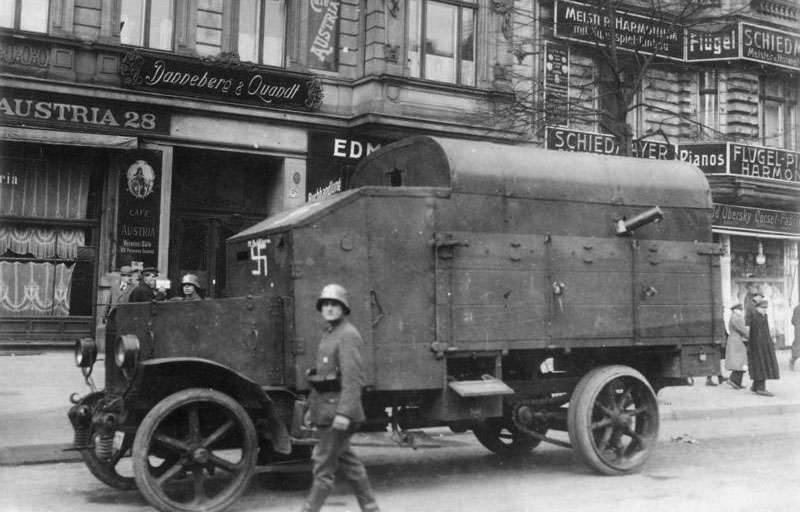 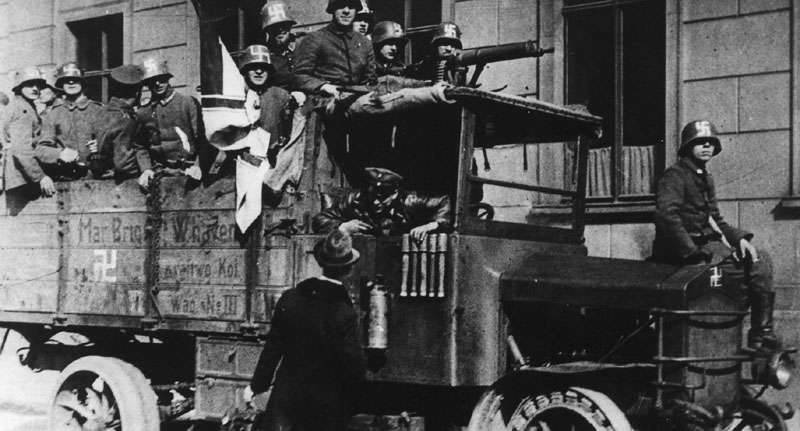 Order erkhardtovtsev truck. It is curious that the swastikas on helmets and on the car turned in different directions. Obviously, then this did not attach importance. 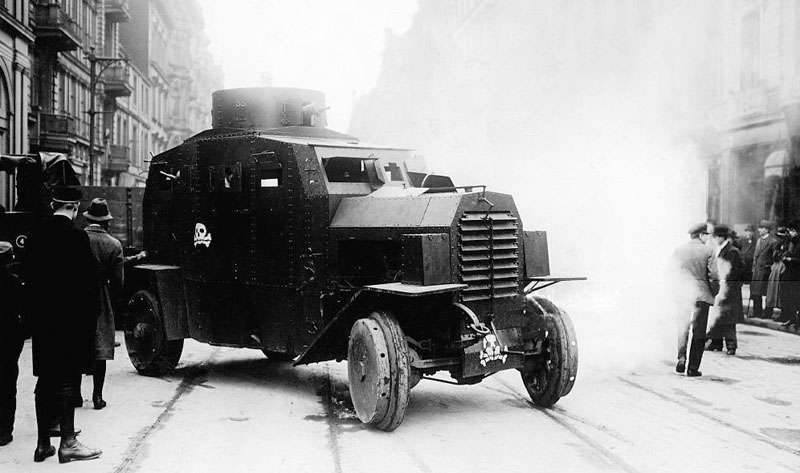 Not all the putsch techniques were painted with swastikas. This armored car bears the emblems of the Kaiser armored troops troops in the form of an “Adam's head”. By the way, he was also called "Ehrhardt", but not in honor of the fan of curved crosses, but by the name of the developer Heinrich Ehrhardt. 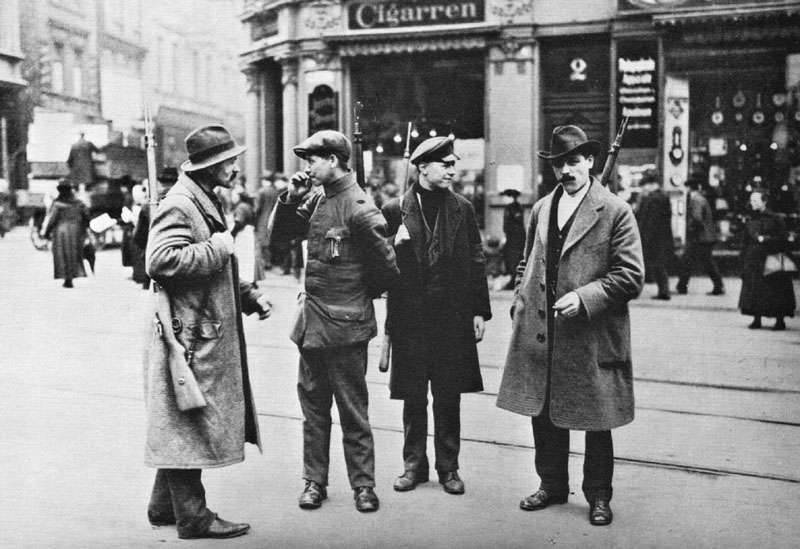