The theory of drive and Bandera antisystem

March 2 2016
51
With the start of the coup in Ukraine, some observers explained its development as a natural factor - the increased passionarity of Western Ukraine, historical Galicia. With the beautiful word “passionarity” they explain today the Bandera aggression in the south-east of Ukraine. That is, the energy of a passionate minority is supposedly spreading, and there is nothing to be done about it. 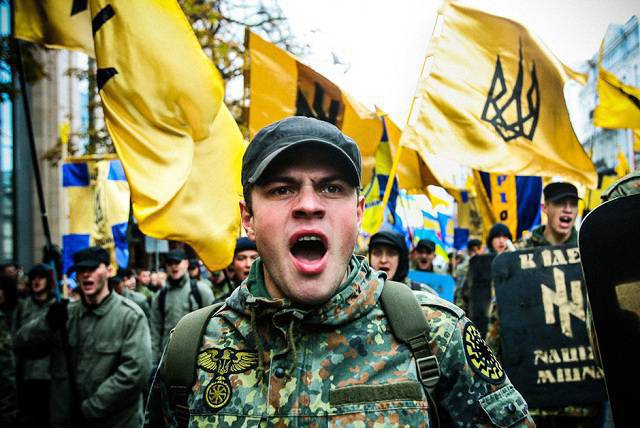 The war in the Donbas has refuted this lie, the Bandera regions give the lowest mobilization figures, and more recruits from the central and eastern regions fight. That is, heightened “passionarity” covered the financing of extremist nationalist organizations, and they are still covering up. Passionality for money is a marketable commodity at all times, but the cruelty of ukronatsionalistov, according to the theory of passionarity L.N. Gumilev, says just the opposite - about their sub-drive, that is, the reduced passion of the true Bandera: real passionaries, as a rule, are generous.

However, the historical theory of the greatest passionary of the twentieth century L.N. Gumilev, a Russian Soviet historian and Eurasian, allows for a different look at current political events. We will not go into the details of Gumilev's passionary theory here, those who wish can refer to the original source - his book “The Ethnogenesis and the Biosphere of the Earth”, but let us turn to the obvious conclusions.

According to the theory of passionarity, the Galicia-Ukraine-Banderia project is an anti-system, a foreign body, introduced into the parent system of Russia-Russian world. It was formed as a special project of Austria-Hungary, Germany and Poland against Russia, there are numerous historical testimonies about this. Here is the most vivid, General Max Hoffman, Chief of the General Staff of the Eastern Front in 1919: “In fact, Ukraine is the business of my hands, and not the fruit of the conscious will of the Russian people.” (Pay attention to the Hoffmann's “Russian people,” he says, who becomes “Ukrainian,” betraying his name.) But the opinion of the “Ukrainian” Hetman Skoropadsky (1873-1945): “Narrow Ukrainians are exclusively a product brought to us from Galicia, ... I consider it senseless and disastrous for Ukraine to break away from Russia, especially in cultural terms. "

The historical development of this West Russian antisystem is the path of the genocide of the population of Galicia, remembering its Russian historical birthright, the horror of the killings in the Austrian concentration camp Talerhof and others similar in the early twentieth century, the first in Europe and second in the world, after the English camps for the Boers in South Africa. Today, this anti-system in the form of the Bandera Kiev regime has strengthened and captured almost the entire territory of the former Soviet Ukraine after the February 22 coup, thanks to financial and military support from the outside, because it still remains a special project of the West against Russia-Russian world.

The anti-system received such a name from Gumilev, because it declares with its “values” everything directly opposite to the maternal systemic ethnic values. It forms a “negative world perception” in relation to the maternal system, and therefore it is absolutely hostile to it, exists at its expense, devouring its resources, population, and leads an endless war with it until one of the parties is completely destroyed.

In this sense, communism in its first, after Lenin, Trotskyist phase, before the establishment of Stalin’s dictatorship, was an obvious anti-system — a “permanent world revolution” in relation to the capitalist western system, but an anti-system that is social and international in content. The Bandera anti-system is by nature Galician nationalist, and historically neo-Nazi, therefore, feeling its “revolutionary” kinship with communism, nevertheless demolishes communist monuments.

The maternal system confronts the anti-system historically in different ways, but there is, theoretically, a common answer. It produces the so-called passionate consortia - a kind of antibodies for the antisystem, which engage in combat with the antisystem, and can also destroy it.

In response to the antisystemic coup in Kiev, the maternal Russian system developed new consortia — the Russian Spring, Novorossia as an idea, responded with the Crimea and the uprising in the Donbas, as the visible material embodiment of the Russian Spring. The support of the consortia of Russia, including the military, the new Russian consortia in Novorossia, allows them to successfully repel the onslaught of the Bandera anti-system, and its Western allies.

The West, according to the theory of drive, is a distinctive civilization, and alien for Russia, as well as for China, India and a number of other civilizations. Geopolitical confrontation between them is inevitable. Intercivilizational relations are partnerships, and at times become aggravated before wars. From here originates, over the centuries, the Western policy of weakening Russia, in today's language, the “policy of containment”.

Hence the centuries-old waves of expansion of the West, from the Poles in the Time of Troubles, then Napoleon, Hitler, the Cold War, and, finally, the creation by Washington of the Bandera anti-system, in which 5 billion dollars were pumped, according to the deputy. US Secretary of State V.Nuland. Creating a Bandera anti-system through a coup d'état is a clear geopolitical aggression of the West against Russia.

In principle, consortia can conserve, block the anti-system (freeze the conflict). Then, a blocked anti-system, by virtue of its abstractly aggressive, destructive nature, will either self-destruct, under pressure from the maternal system, or turn into some kind of more adequate creative system.

Thus, the blocked communist antisystem of the “world revolution” in Russia was reborn, in the throes of 30, into the Stalinist system of “building socialism in a single country”, oppressive but creative to the current conditions and creative in spirit, so it was able to defeat Western fascism in the face of Hitler. The Trotskyist anti-system of the “world revolution” burned down during the Stalinist repressions.

In the Bandera case, the rebirth of the anti-system is hardly possible, because it is fed and directed by the West precisely to support its aggression against Russia as a system. For the same reason, the self-destruction of the Bandera antisystem is also impossible.


The Minsk agreements in their political part is a diplomatic attempt to eliminate the anti-systemic features of the Kiev regime, which will lead to the loss of its identity by the anti-system, that is, to its self-destruction. Anti-system can not go on it, so the Bandera regime will sabotage the Minsk Agreement indefinitely. While they, one way or another, do not collapse. What strategy can Russia choose in this situation?

The anti-system always needs an enemy, the Bandera anti-system declared its enemies long before 22 February 2014, from the concentration camp Talerhof. Its very existence is really deadly for Russia. Statements by an extremist Korchinsky and other Svidomo leaders of the anti-system about the struggle before the defeat of Moscow, and high-ranking American generals like Philip Breedlove about the victory over Russia - this is not crazy nonsense, these are the program goals of the anti-system according to the theory of passionarity of L.N. Gumilev. Therefore, the choice of Russia, in general, no.

The blocking of the Bandera anti-system, necessary for Russia, can ensure the military-political defeat of its Western parents and masterminds; this is a radical solution to the issue of ensuring Russia's security. Or the threat of such a war that the West will refuse to support the Bandera anti-system. Or the creation of such problems to the West, which are incompatible with life, that it will forget about Ukraine forever, possibly with the help of the global financial and economic crisis.

In fact, Russia decided to go to war with the United States on the Syrian site, and the States are retreating, the talk about the creation by the Americans of a no-fly zone over Syria has been silenced. The terms of the truce in Syria were accepted at the request of Russia, that is, they were dictated by Moscow, and Washington, on reflection, agreed with them.

Ctrl Enter
Noticed oshЫbku Highlight text and press. Ctrl + Enter
We are
Color revolution as the “star of death”“How to deal with those who are on the“ death star ”?
51 comment
Information
Dear reader, to leave comments on the publication, you must to register.