Project "ZZ". Breedlove in the field is not a warrior

February 29 2016
52
Britain's permanent representative to the UN, Matthew Rycroft, believes that Russia should use its influence to ensure positive results in the cease-fire in Syria. A potential US presidential candidate, Donald Trump, consults on foreign policy issues with the former head of RUMO, and he favors close cooperation with Russia. Most experts polled by Bloomberg believe that the parliamentary elections in Russia are unlikely to cause any protests similar to the 2011 unrest of the year. The contradictions between the West and Russia are smoothed out: an expert on Eastern Europe, Stefan Meister, notes that the rhetoric of the EU and Russia has “come closer”. And only a lonely old warrior Breedlove warns: Russia set out to "rewrite" the rules of world order.


In a popular British newspaper "Express", in a note by Tom Parfitt, a statement by the Permanent Representative of Great Britain to the United Nations appeared. The diplomat bluntly stated: Russia must use its influence to help end the “Islamic State” in Syria. Also, in his opinion, Russia needs to “turn words into actions” and finally destroy “IG”.

Diplomat name is Matthew Rycroft (Matthew Rycroft). He personally welcomed the adoption of the resolution by the UN Security Council on a cease-fire in Syria.

According to him, Moscow, which has close ties with Bashar Assad, should use its influence to achieve a positive effect in the cease-fire. Literally: "Russia must turn words into actions and use its unique influence on the Assad regime, on the units of the militias and their patrons in order to convince them to comply with this agreement." If Russia manages to do this, the West will finally receive "much-needed confidence" in a "political settlement" of the Syrian crisis. If Moscow does not do this, the "spiral of violence" will continue to unwind.

According to the Permanent Representative, the time has come to fight the “IG” (“Daesh”), and this fight is “the only way to put an end to the protracted conflict” and defeat the terrorists.

In the meantime, it turned out that potential US presidential candidate Donald Trump is consulting on foreign policy issues with the former head of RUMO, and he is calling for close cooperation with Russia.

This writes the American edition of the international agency Reuters.

As it turned out, potential presidential candidate Donald Trump receives foreign policy advice from a former US military intelligence chief. And this person is in favor of closer cooperation between the United States and Russia on global security issues. The agency learned about this from three reliable sources.

Sources - former officials who have worked in the past in the field of foreign policy in the administration of the White House. They reported that retired Lieutenant-General Michael Flynn, who was the head of the Defense Intelligence Directorate under President Obama in 2012-2014, "unofficially" gives advice to Trump.

There is information that Trump himself will soon announce people who are giving him advice on foreign policy issues, but the billionaire is still silent. His headquarters did not respond for Reuters request for Flynn’s person. Flynn himself also declined to comment on his boss. In response to a request to describe his point of view about relations with Russia, he simply referred to his public statements.

Trump, the agency recalls, is noticeably different from other possible presidential candidates in precisely its position in Russia: after all, it “respects very much” President Vladimir Putin and openly advocates a thaw in bilateral relations, which are currently “as cold as ice”.

As for Mr. Flynn, it is known that he resigned from the post of chief of the Pentagon’s Chief Intelligence Directorate a year before the end of his term of office. Flynn surprised some US foreign policy veterans when, at the end of last year, he was seen sitting at a table with Putin at a banquet in Moscow on the occasion of the celebration in honor of an international broadcasting network funded by the Russian government (referring to Russia Today). Flynn said in an interview with RT, published on 10 in December of 2015, that the United States and Russia should work together to resolve the Syrian crisis and defeat the Islamic State.

Flynn later said (according to the German magazine “Der Spiegel”) that the war in Iraq, launched in 2003 by then President George W. Bush, was a mistake that led to the emergence of IG.

As for Trump, he often and strongly condemns the invasion of Iraq.

They speak in the West about internal problems in Russia.

The authors shared with the readers forecasts regarding the socio-political situation in the Russian Federation in connection with the economic crisis. It turns out that despite the recession in Russia, most economists believe that the parliamentary elections in Russia (in September 2016) will not cause protests, such as those that “thundered all over the country” in 2011.

Bloomberg journalists interviewed 27 economists. The Bloomberg 27 median showed that there was a 30% chance of political unrest in the country, which would be caused by economic difficulties. And only six economists believe in the 50-percent probability of a "coup".

In the 2011 and 2012 years, reminds the publication, tens of thousands of people took to the streets of Russian cities, speaking out against what they called “election fraud” and “Putin’s return to the presidency.”

The likelihood of a political takeover is much lower than last time, thanks to the “deterioration of relations between Russia and several neighboring countries,” said K. Maggio, head of emerging markets research at Toronto Dominion Bank, based in London. “All this suggests that the Russian people will feel more united and will support their government,” the expert said.

Here are some key points from his answers.

1. The rhetoric of the West with Russia today has become "close". At the same time, the “aggressive tone” of the Russian side became “more restrained.”

2. Both sides should think about how to find a way of coexistence. This is necessary for both the West and Russia. But while the parties still do not know how to do it.

3. The main goal of Moscow is to conduct dialogue with the United States on an equal footing. The Kremlin wants Russia to be perceived as a central player in international relations.

4. Thanks to the actions in Syria, Russia emerged from the “isolation”, into which it fell due to the Ukrainian crisis. The United States had to negotiate with Putin.

Against this (relatively favorable for Russia) background, the lonely voice of the old warrior General Bridlav rang out. He once again warned that Russia, they say, set out to "rewrite" the rules of world order.

His statement published the American edition. "The Hill". 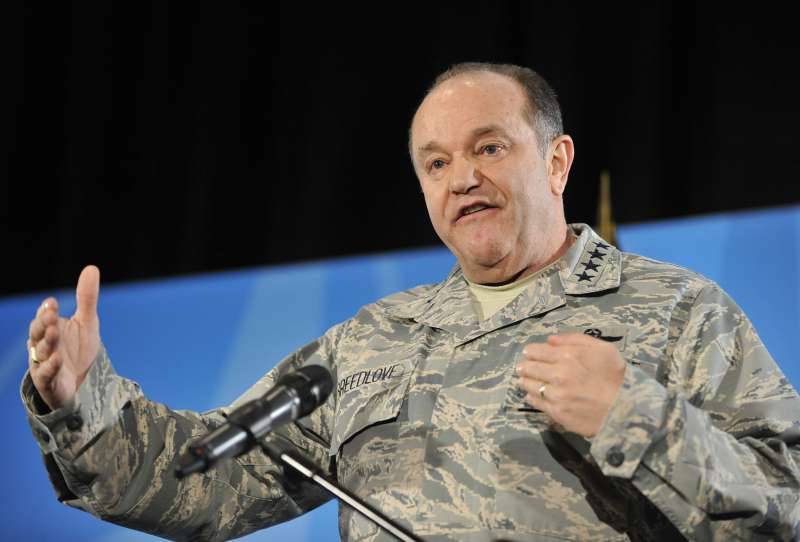 As the journalist Rebecca Keel notes, the commander of US forces in Europe announced the end of an era of cooperation with Russia. Speaking to the House Armed Services Committee, General Philip Breedlove said:

“Russia does not want to challenge the accepted rules of international order. She wants to rewrite them. ”

What did Bridlove do on Capitol Hill? He defended the Pentagon’s budget request for the fiscal 2017 year, namely the "fourfold increase" in funding for the European Reassurance Initiative (ERI), a program aimed at "deterring aggressive Russia." This increase is expressed in the amount of $ 3,4 billion.

Republican Mac Thornberry (from Texas), chairman of the committee, questioned such an initiative. In his opinion, it is simply inadequate for the goal.

Bridlav himself, apparently, defended funding very ineptly. On the one hand, he demanded money, on the other, he declared that "there is no cold war." And then he told the crowd that Russia was unintelligible "in combat means" in Syria and that its air strikes "kill civilians", forcing them to flee to Europe. He reported on "absolutely" inaccurate bombing, which the Russians are conducting "in Aleppo and other places." In his opinion, such attacks have “almost zero military utility” and are intended to achieve other goals: “make people” flee. In turn, refugees become the “problem of someone else”, namely Europe. In this way, the Russians want to "bend Europe."

It seems that the intensity of the confrontation between the West and Russia is decreasing. Potential presidential candidate D. Trump enjoys great popularity in the United States today; according to available information, retired Lieutenant-General Michael Flynn, formerly head of the Defense Intelligence Agency, is advising closer relations with Moscow. Persons like the commander of the US forces in Europe, General Bridlou, who demand money to "contain" Russia, do not enjoy great prestige even from the head of the House of Representatives Committee on Armed Forces. In addition, we recall, the Obama administration is pursuing a policy of reducing military spending, calculated for ten years. It is not clear how Obama’s successors in the White House will reduce these expenses, but Obama himself does not intend to retreat from his initiatives as a whole. And even Breedlove, in essence, repeats the theses of Obama, who earlier said that the United States does not conduct a “cold war” with Russia.

No one wants a “cold war” with the Russians, much less a war hot. Therefore, the main question of international politics is the question posed by Stefan Meister: both sides, both the West and Moscow, should think about how to find a way of coexistence.

Ctrl Enter
Noticed oshЫbku Highlight text and press. Ctrl + Enter
We are
Overseas ally? Donald Trump - US Presidential CandidateUS military intelligence reform: smart loves to learn, and a fool to teach
52 comments
Information
Dear reader, to leave comments on the publication, you must to register.