Home, old dispute between the Slavs 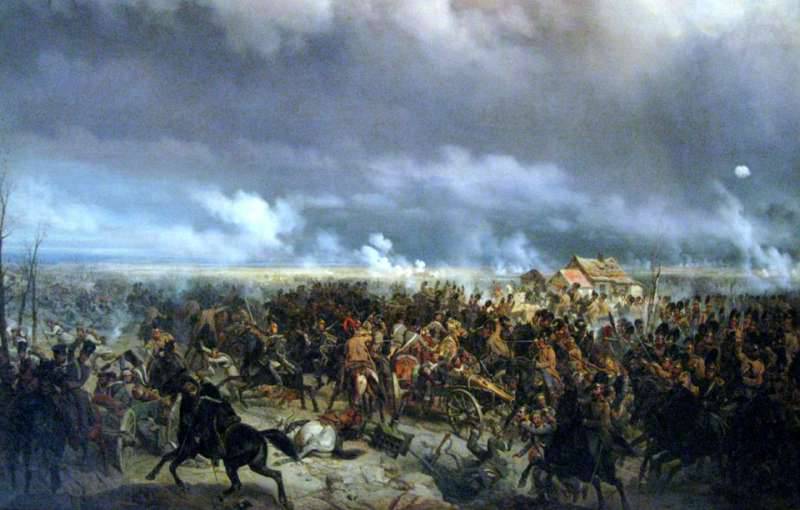 Exactly 185 years ago, February 25 1831 (in a new style), the largest battle in the world took place since the end of the Napoleonic Wars. The Russian army of 72 with thousands of people under the command of field marshal Karl Firidrikh Anton von Dibich (aka Ivan Ivanovich Dibich-Zabalkansky) tried to get through to Warsaw. Near the village of Grokhov, the Polish army of General Yozef Khlopitsky, 56 numbering thousands of soldiers and officers, of whom 40 thousand participated directly in the battle, the rest were in reserve, blocked her path. The Russians had 228 guns, the Poles had 120, as well as two dozen rocket launchers that played a prominent role in this battle.

The Russians stubbornly attacked, the Poles fiercely defended, continually striking counterattacks. The alder grove in the center of the Polish positions passed from hand to hand three times. Only after the fourth attack of the 3 Grenadier Division, which the field marshal himself had led into the battle, the Poles were finally knocked out of the grove, and then from the lunettes behind her. General Khlopitsky participated in this fight, who was wounded in the leg.

After breaking through the enemy defenses in the central sector, Dibich decided to consolidate his success and threw cavalry into the breakthrough. At the point of attack, the cuirassier regiment of Prince Albert of Prussia galloped. However, the attack choked. The rugged terrain behind the grove, dug up by ravines and riverbeds, was not well suited for cavalry actions, in addition the Poles covered the attackers with artillery and rocket volleys. After suffering heavy losses, the cavalry retreated.

However, the Poles could not hold the cut in half the position and in the evening Khlopitsky gave the order to depart to Warsaw, which was only a few kilometers away. The city was covered by powerful fortifications on the outskirts of Prague, standing on the east bank of the Vistula. Dibich, after listening to the reports on losses and ammunition remnants, decided that there was no longer any forces left for the capture of Prague. And although General Karl Wilhelm von Toll called for an immediate assault, believing that the enemy was broken, demoralized and would not offer serious resistance, the field marshal showed caution and ordered a retreat to the supply bases.

Thus, in tactical terms, the battle can be considered a relative victory for the Russian troops, but at the strategy level this was a failure. Because of the stubborn resistance of the Poles, it was not possible to seize Warsaw and even its left-bank suburb. At the end of March, the Poles launched a counteroffensive and defeated the Russian army of General Geismar in the battle of Wavr. However, this is different история.

In the battle of Grokhov, the army of Dibich lost 9400 (according to other sources - 9500) people killed, wounded and missing. Unfortunately, I could not find a breakdown of these losses by categories. The Poles have lost 6800 people, also without breaking down the dead, wounded and missing. Three Polish cannons became the trophies of the Russian army, the rest of the Poles were evacuated. Dibich, in his report, estimated the enemy’s losses at 12 of thousands of people, having almost overestimated them by half. However, such an overstatement is a common thing for any war. And on the screen saver - a picture of the Russian artist Gottfried (Bogdan) Villevalde "The Battle of Grokhov". 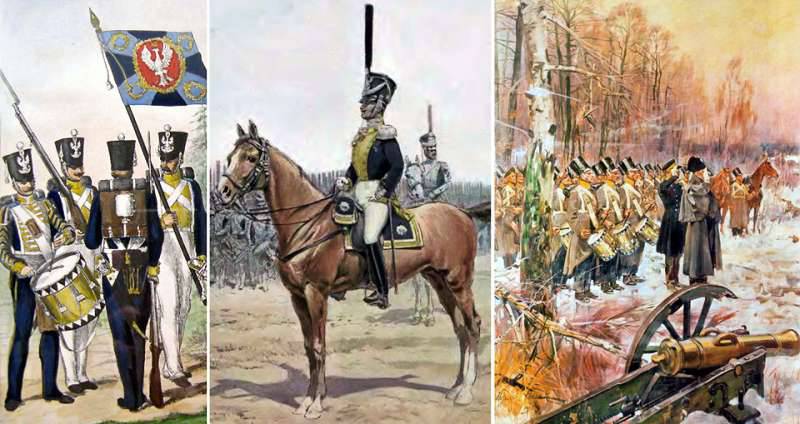 Marines and Grenadier officer of the Polish Army in uniforms of the Russian-Polish war 1830-1831. To the right is the construction of the 4 Infantry Regiment, which defended an alder grove. 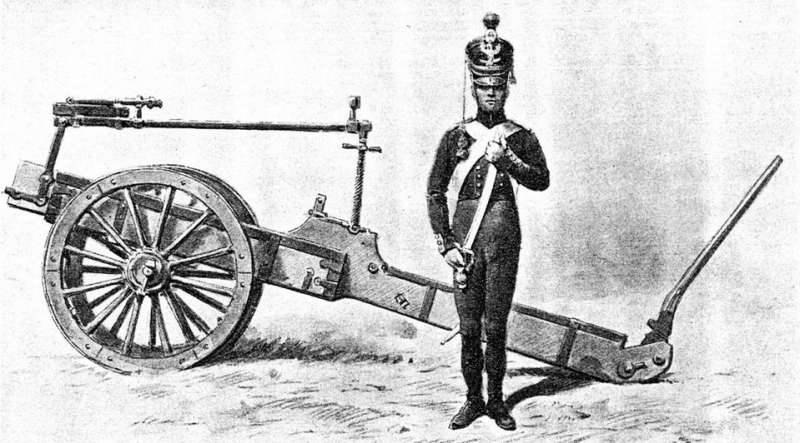 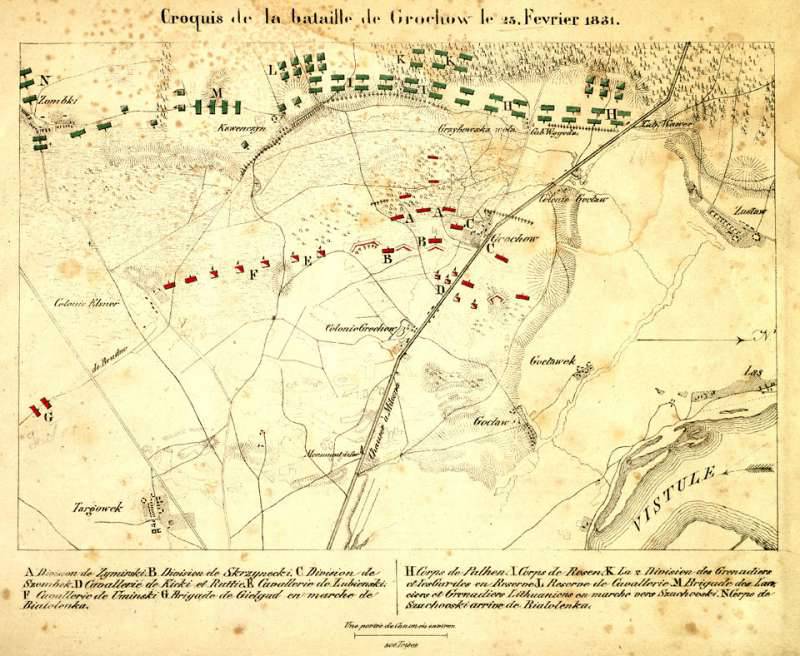 The map of the location of the troops before the beginning of the Battle of Grokhov. The Poles are marked in red, the Russians - in green. 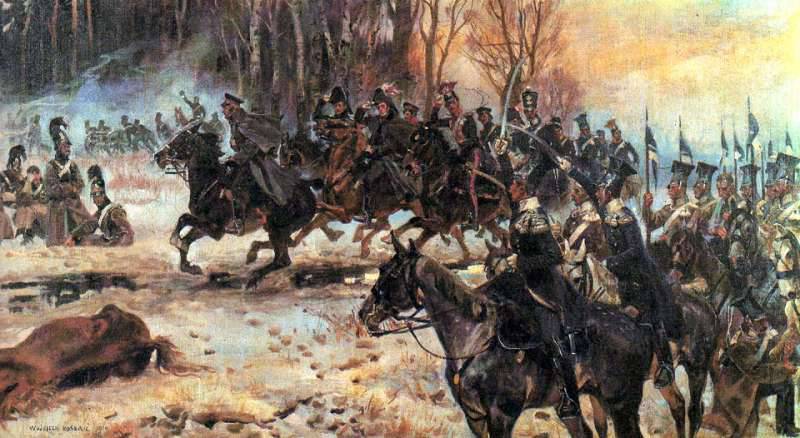 Painting by Wojciech Kossak "General Hlopitsky with his headquarters in the Battle of Grokhov". 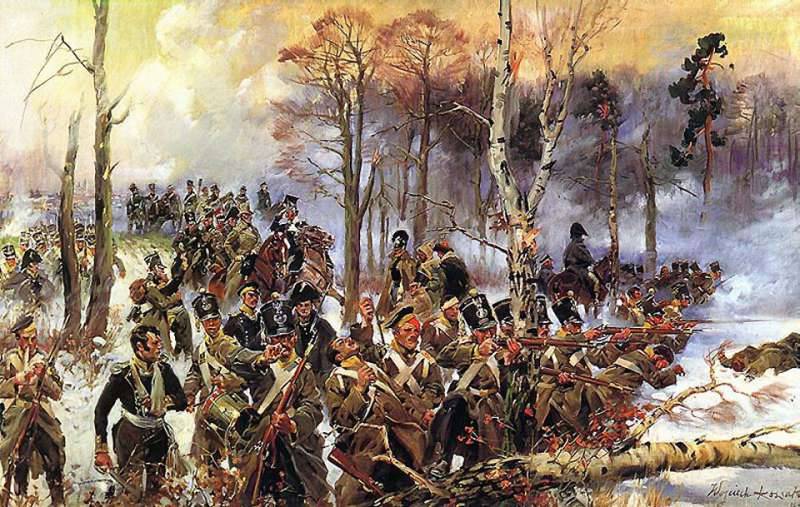 Painting by the same artist "Defense of the Alder Grove".

Ctrl Enter
Noticed oshЫbku Highlight text and press. Ctrl + Enter
We are
"Warsaw at Your Majesty's Feet"Myths of the Great Patriotic. Papier mache helmet
122 comments
Information
Dear reader, to leave comments on the publication, you must to register.