The story of one spinning wheel

February 25 2016
6
Another one история o heirloom. And this story also has pages “written” during the war ...

In the Kobylkin family there were four men: the father - Fedor Artemyevich, and three sons: Pavel, Fedor and Peter. Feodor Artemyevich's wife died when her youngest son was four years old. The boys and father learned how to farm themselves. Pavel knitted socks and vests - no wonder they say that knitting is better in men's hands. Pavel sold his products on the market, and with great success. Fedor baking cottage cheese pancakes. Peter wove from wicker baskets. And Fyodor Artemyevich was a notable fisherman. He made fishing rods himself, knew fish places, caught not only for his family, but also his neighbors. So they lived.

... boys grew up. The eldest, Paul, was about to get married. But the fire and burned the land and the people of civil war. The brothers now no longer lived at home, and when they came, they tried to keep quiet about their affairs. More questioned about how the collective economy is now being established. Father met them with joy. Years bent back, whitened hair, made it almost deaf. Even in his youth, he lost a leg, now a home-made wooden prosthesis was tied to his knee. And in previous years, this leg is often sick, and now and did not give rest.

Once, when it became impossible to sleep from pain, Fedor Artemyevich left the house. I went to the outskirts of the native village of Ilino (today it is the territory of the Lipetsk region, very close to the regional center), where collective farm hay was stored. He expected to see the watchman near the stacks. And I saw three neighbors, three brothers. Silently, they quickly pulled a pile of hay from a stack, carried them to the road where the cart stood. They stole collective farm good ...

Fyodor Artemyevich heard badly and walked poorly. But the vision is kept sharp, the mind is firm. He shouted that he was strong:
- People! For help! Hay steal!

But the villagers were far away, and the thieves were close. The eldest of the brothers (they did not give me the names and surnames) first jumped to the old man, pierced with a pitchfork. Two others followed suit ...

When, awakened by a cry, people arrived, the bandits were gone. At the stack lay only Fedor Artemyevich. He was still alive. On his body, villagers counted 21 wound.

The next morning, Paul, who learned about the misfortune, came to his dying father. That's what he managed to bequeath to his son:
- When I die, take off the prosthesis. Marry - you make your spindle spinning wheel. This will be your memory. And the house is yours. Rebuild it - forget about me.

Pavel fulfilled his father’s order. Made a spindle and saved it for the time being. True, it did not come soon - the Great Patriotic War was ahead.

All three went to the front in the first days. Fedor defended Leningrad, it happened that he drove food along the Life Road to a blockade city - he drove his car famously. For the defense of Leningrad received a medal. There was also the Order of the Patriotic War of the third degree - for the capture of a German officer. Killed near Warsaw.
Peter was missing. But then Fedor managed to find out that he died while crossing the Dnieper.

And the elder brother went through the whole war in the infantry. He fought at Stalingrad, liberated Belarus, reached Berlin and signed on the wall of the Reichstag. And the cherished wand was with him all the time. He took it for his fellow countryman, Tanya, but did not make the spindle yet ...

Returning from the front, Pavel Fyodorovich married, his son Ilya was born. The boy grew up very restless and inquisitive. At four years old (!) He learned to weave baskets and knit socks. And in five years he decided to learn how to spin wool. There were sheep in the Kobylkin farm, but there was no spinning wheel. Pavel's wife, Tatyana Ivanovna, knew how to spin, but she gave her spinning wheel to her younger sister when she got married.

Pavel recalled his father's order. He took out a piece of wood that once replaced his father's leg, wanted to make a spindle out of it. But for him birch is needed, and his father's memo was from solid maple. But it turned out a column - the vertical part of the spinning wheel. Then Paul made the wheel, but could not find the right wood for the spindle. Needed a young birch.

Help the father decided son. Outside the village was a collective farm apiary, and birch trees grew nearby. Ilyusha slowly stole a knife from his father and went to the treasured trees. I chose a young whitelist, climbed on it and cut down a small but strong branch.

The bees did not tolerate an uninvited guest. In a matter of minutes, a large black cloud gathered, flew at the boy. Ilya grabbed the branch and, brushing it off the bees, rushed to the house at full speed ... Already the boy got from his parents and the beekeeper! And in the fever lay for a long time. But the spinning wheel was completely ready.

Ilya Pavlovich Kobylkin, the grandson of Fyodor’s grandfather, presented the very spinning wheel to his niece, Svetochka, nine years old, Popova. But the girl did not want to learn to spin. She adapted the family heirloom to another occupation — polished fragments of shells with a spinning wheel, and then made beautiful beads from them. One day, Sveta inadvertently pressed a fragment of shells to the wheel and cut them into the thumb pad. A small, almost imperceptible shell fragment stuck in a deep wound. The hand was swollen, rotting. I had to go to the doctor.

- Strange cut! - he was surprised. - How did it happen?
The girl told.
“You'd better learn how to spin,” the doctor advised.
“You should see what a spinning wheel we have!” Old, ugly. Her museum must pass, and not to keep the house!
- Ugly ?! - the doctor was even more surprised. And suddenly he smiled: - Where do you live? I'll come to visit you. Your spinning wheel will be as good as new!

No one in the village of Lipovka of the Dobrovsky District knew that Dr. Arkady Mikhailovich Zatonishchev had golden hands. Sveta found out about it first. Arkady Mikhailovich temporarily took the spinning wheel to his home. Re-polished, painted a special, made according to his own "recipe", golden paint. Beauty turned out - and only. And Sveta learned to spin! But not because now the spinning wheel has become different, but because I understood the most important thing: the main beauty is hidden in human labor.

Svetlana Sergeevna Popova and now lives in the village Lipovka. The doctor, Arkady Mikhailovich, has long died. His wonderful paint was erased. I had to replace the wheel - the old one was broken into two halves from time to time. Svetlana Sergeyevna herself re-painted the spinning wheel - now it looks like a new one.

Yes, but not in beauty matter, but in memory. Svetlana Sergeevna remembers that the lower part of the spinning wheel once helped Fyodor Artemyevich Kobylkin to walk. That the spindle was cut from a birch by her uncle, being a boy. He remembers the lesson of a rural doctor. And now she almost doesn’t spin - bad vision affects.

Beautiful spinning wheel. Not a new paint, but a careful attitude to the memory of people. 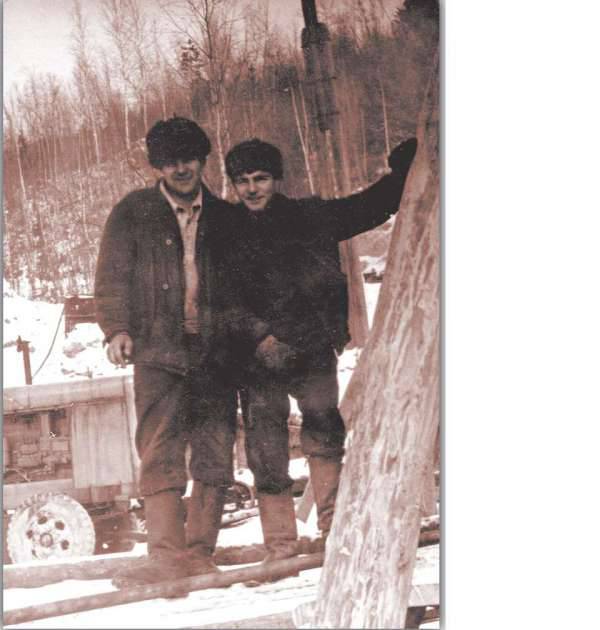 The photo shows Pavel Kobylkin on the left.

Ctrl Enter
Noticed oshЫbku Highlight text and press. Ctrl + Enter
We are
Father toldToday 79 would be the first man who flew into space - Yuri Alekseevich Gagarin
6 comments
Information
Dear reader, to leave comments on the publication, you must to register.