February 18 2016
22
110 years ago, 18 February 1906 of the year, Babajanyan Amazasp Khachaturovich, Soviet military leader, Hero of the Soviet Union (26 April 1944 of the year), Chief Marshal of the Armored Forces (29 April 1975 of the year), was born. Among the famous Armenian tankers, this combat officer rightfully occupies a special place. A boy from an ordinary peasant family managed to become a marshal of the Soviet Union, and was also twice elected a deputy to the USSR Supreme Soviet.


Hamazasp Khachaturovich Babajanyan was born 18 in February 1906 of the year in the small village of Chardakhly in the Elizavetpol province, today it is the Shamkhor region of Azerbaijan. Hamazasp was born into a simple Armenian peasant family, in which there were 8 children (he was the third son). His father Khachatur was an ordinary mountain shepherd, the family lived a poor life, with difficulty making ends meet, but the father took care that his son received primary education. The future Soviet marshal graduated from 5 primary school classes, after which he helped his father with the housework and hogwash, after all, the family had many children. In 1915, he and his family moved to Tiflis, where he studied at an Armenian school for some time, but without completing it, he returned to Chardakhlu, where he was engaged in farming until 1925, already dreaming of a military career. Surprisingly, 2 marshal, 12 generals and 7 Heroes of the Soviet Union were born in this Armenian village, the air in this mountainous region was somehow special, favored for military service and combat achievements.

In 1924, Amazasp Babadzhanyan decided to join the Komsomol and very soon became the first secretary of the rural Komsomol cell. In September, 1925, at the age of 19, he was drafted into the army, and he began his service in the ranks of the Red Army, leaving for the Komsomol conscription. Wearing a military uniform, he began training at the A. Myasnikyan Armenian Joint Military School in Yerevan, and then in September 1926 was transferred to the Transcaucasian Military Infantry School in Tiflis (today Tbilisi). After completing training in September 1929, he was sent to serve in the 7 Caucasian Rifle Regiment, where he served from platoon commander to company commander. At this time, he took part in battles with local gangs and the suppression of anti-Soviet demonstrations, the future marshal was wounded in one of the battles.

Until October 1938, Amazasp Babadzhanyan continued to serve in various positions in units of the Transcaucasian Military District, until he was transferred to the Leningrad Military District as assistant to the commander of the 2 machine gun regiment. As part of the formations of the Leningrad Military District, he took part in the Soviet-Finnish war. During one of the 18 fights in February 1940, the future marshal received another wound. After recovering and returning to service in December 1940, he was appointed Deputy Commander of the 493 Infantry Regiment, in January 1941 - Assistant Commander of the 751 Infantry Regiment, and in April of the same year, just before the war to the position of assistant chief of the first division of the operational department of the 19 Army headquarters.

This army completed its formation in May 1941, it was formed from units and formations of the North Caucasus Military District. Three weeks before the beginning of the Great Patriotic War, the army began to transfer to Ukraine in the region of Cherkasy. Already after the start of the war, due to the heavy defeat of the troops of the Western Front, the army urgently began to redeploy to the Moscow sector, deploying Vitebsk, Rudnya, Smolensk at the turn. Here, Hamazasp Khachaturovich Babajanyan received his baptism on the fronts of the Great Patriotic War. Already in August 1941, Babadzhanyan was appointed commander of the 395 Infantry Regiment of the 127 Infantry Division, which September 18 was the 2 Guards. Together with this regiment he participated in the Smolensk battle and the Yelninskaya offensive operation. After their completion, as part of the operational group commanded by General A. N. Ermakov, he participated in defensive and offensive battles in the Glukhov region, as well as in the Oryol-Bryansk defensive operation, and fought at Kursk and Tim.

Amazasp Babajanyan became a guard, while still an infantryman. In the victorious offensive operation of the Soviet troops near Yelnya, he commanded the 395th rifle regiment, in these battles he showed himself to be a prudent, prudent and at the same time decisive commander. Three months after these battles, he, as the best regiment commander, was sent to further study at the MV Frunze Military Academy. However, he did not have to study at the academy for a long time. Already in the spring of 1942, Babajanyan received an order to form the 3rd mechanized brigade in the city of Kalinin. The creation of a new compound in the city recently liberated by Soviet troops took almost six months; a new compound was formed in the autumn of 1943. The mechanized brigade included tank regiment, three motorized rifle battalions, artillery division, reconnaissance, anti-aircraft machine-gun and engineering companies. 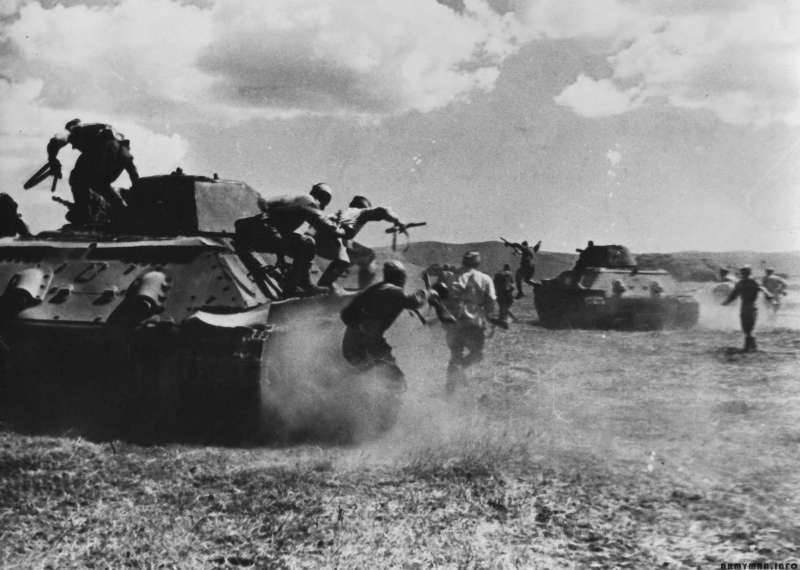 It is worth noting that the infantry officer Babadzhanyan was able to become a real tank commander in a fairly short time. At the same time, up to July 1942, as he later confessed personally, he had never been in a tank. Previously, during his service in the infantry, he had to interact with tanks, but he had not climbed into the armor of combat vehicles before and had not looked into the tank hatches. But in the end, in the Upper Volga land, Hamazasp Babajanyan tied up with heavy armored vehicles, as it turned out, the rest of his life.

The formation of the 3 of the mechanized corps, which was joined by the newly formed brigade of Colonel Babajanyan, was completed in Kalinin 18 on September 1942 of the year. This corps became part of the 22 Army of the Kalinin Front, and in November-January it took part in battles with the Rzhev-Vyazma group of Germans. His baptism of fire in the post of commander of the brigade Babajanyan took 26 on November 1943 of the year during offensive battles that were fought north-west of Rzhev. In January, the 1943 of the 3 th mechanized corps led defensive battles, and in early February was transferred to the Ostashkov area, where it was included in the 1 Tank Army, in which he acted on various fronts until the end of World War II.

Truly a tanker commander Hamazasp Babajanyan could feel himself in the battle of Kursk, where his brigade could distinguish itself. Already on July 6, a corps in full force joined the battle with units of the German 4 tank army, which launched an offensive in the Oboyan direction. The stubborn defense and active counter-attacks of the corps formation, including the 3-I mechanized brigade commanded by Colonel Babadzhanyan, in close cooperation with other formations of the Voronezh Front, was able to stop the advance of a large German group and force the enemy to go on the defensive. 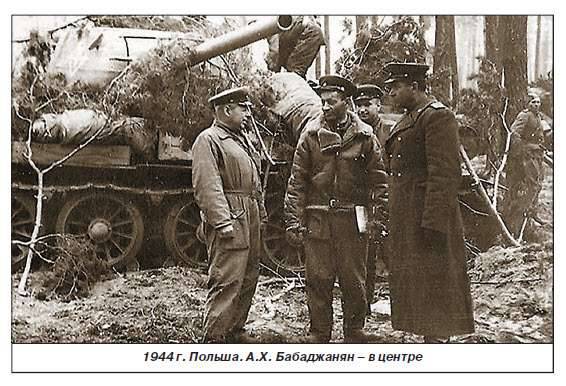 In October, the 1943 of the year, the 3-I mechanized brigade was transformed into the 20-th Guards, after which it managed to take part in the Zhytomyr-Berdichev, Korsun-Shevchenko, Proskurov-Chernivtsi and Lviv-Sandomir offensive operations. During the fighting in Ukraine, the unit freed more than 60 settlements from the enemy, was able to reach the Dniester and successfully crossed the river. By order of the Supreme Commander for the liberation of the cities of Chertkov and Zaleshchiki, the brigade was given the name “Zalashchitskaya”. And 26 on April 1944 of the year for personal courage and skillful leadership of the fighting of the 20 units of the Guards Mechanized Brigade, as well as successfully forcing the Golden Star with the XNUM medal among the first parts of the Dniester River. .

The officer especially remembered the battles for the Sandomierz bridgehead in Poland. On the bridgehead of his, jumped out of a burning fighting vehicle, a fragment of a projectile stuck into his throat. At the time, the brigade commander had even lost his speech. However, in the Great Patriotic War, Babajanyan was lucky to say. His tank burned many times, shuddered by German shells, spread caterpillars on snow and grass, but the tanker had only two injuries: shrapnel in the throat and received in the Battle of Kursk when three weeks he had to drag heavy gypsum leg, moving with crutches.

August 25 1944 Hamazasp Babajanyan was appointed commander of the 11 Guards Tank Corps. This corps took part in the Vistula-Oder and Berlin offensive operations of the Red Army. For the liberation of the cities of Tomaszow, Lodz, Kutno, Lenchitsa and Gostyn from the Germans and the valor and courage displayed during these battles, his corps was awarded the Order of the Red Banner, and for mastering the cities of Tczew, Wejherowo and Puck with the Order of Suvorov of 2 degree The corps under the command of Babajanian took part in the battle for Berlin, after which he was given the honorary title “Berlin”. For excellent leadership of the corps and competent conduct of offensive operations to break through the German defense and defeat the enemy’s resistance centers, as well as the dedication and courage shown by this, Hamazasp Babajanyan was awarded the Suvorov Orders of the 1 and 2 degrees. 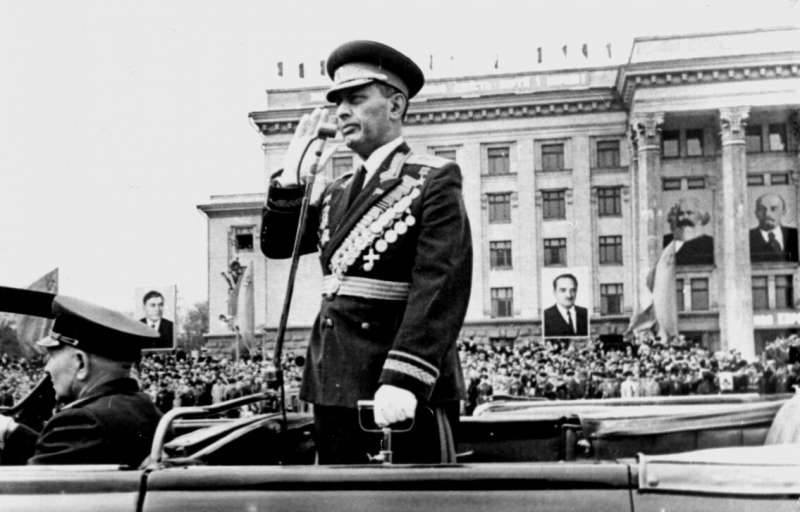 For all the time of service, Amazasp Babajanyan was awarded the Golden Star of the Hero of the Soviet Union, four Orders of Lenin, the Order of the October Revolution, four Orders of the Red Banner, the Orders of Suvorov 1 and 2. degree, two orders of the Red Star, as well as numerous medals, including foreign awards. In May, 1 was awarded the second Gold Star medal for the successful fighting and leadership of the troops during the storming of Berlin, but instead received the 1 degree of the Order of Suvorov instead of becoming twice a Hero of the Soviet Union.

After the end of World War II, Amazasp Khachaturovich Babadzhanyan commanded various mechanized armies, troops of the Odessa Military District, served as head of the Military Academy of Armored Forces, was head of the tank forces of the Soviet Army. From 1975, he wore a high military rank - Chief Marshal of Armored Forces. It was Babajanyan who adopted the main battle tank T-72, which was unrivaled in reliability. This combat vehicle to this day is widely used throughout the world, is in service with the armies of Russia and Armenia and many other states. Eyewitnesses told how Marshal Babadzhanyan, as grim and dusty as tank driver mechanics, readily went into all the details in the process of testing the tank. It seemed that for this purpose, it was not at all bogatyr of man’s build with big marshal stars on his shoulder straps, life and tanks were simply inseparable.

The chief marshal of the armored forces, Amazasp Khachaturovich Babadzhanyan, died 1 on November 1977, at the P.V. Mandryki hospital, he was 71 the year. Marshal was buried in Moscow at the Novodevichy cemetery. During his lifetime, he became an honorary citizen of the cities of Yelnya (Smolensk region), Zalishchyk (Ternopil region, Ukraine) and Gdynia (Poland). In Moscow and Odessa, on the houses in which he had to work, memorial plaques were installed in his honor. The square in the North-Western Administrative District of Moscow, a street in Yerevan and a secondary school in Echmiadzin (Armenia) were named after the marshal in 1978.

Ctrl Enter
Noticed oshЫbku Highlight text and press. Ctrl + Enter
We are
Don Service Komarich 1646 of the Year
22 comments
Information
Dear reader, to leave comments on the publication, you must to register.