Today, all sensible citizens are concerned about why the Russian economy is again in crisis. Why the fall in oil prices has hurt us more than others. And what our financial and other gurus, who talked so beautifully about the market paradise, did for a quarter of a century. The participants of the X International Security Forum tried to answer these questions.

Since the advent of loan capital, the world economy has had a choice between two paths of development: the production of goods or profit from virtual money. Unfortunately, for the majority, the second was more attractive. Today, the real sector of the economy in world GDP accounts for only five percent, the rest is speculative.

The development of our country after the collapse of the Soviet Union went precisely on this parasitic model. "Success" is impressive. If 25 years ago, Russia produced a fifth of world GDP, now it is about five percent. So, our economy rolled back decades ago.

“Vyacheslav Solovov:
“We do not have a crisis, but the result of talentless economic management. So it was when it was led by Gaidar and Jeffrey Sachs ""
Since the beginning of the Gaidar reforms, everything has been put on sale: factories, state farms, oil, gas, rare-earth metals. It got to the territory.

“The Transbaikal Governor wanted to lease out 49 thousands of hectares of land bordering China with 115 for years,” cites Nikolai Arefyev, Deputy Chairman of the State Duma Committee on Economic Policy, Innovative Development and Entrepreneurship. - I had to connect the Prosecutor General’s Office and neutralize the deal. Nevertheless, there is a law "On the territories of advanced development", according to which we, it turns out, can lease unlimited areas for 70 years, virtually forever. This is the last thing left to sell more nothing. "

All the “reforms” that were carried out by 25 for years, alas, are badly linked with economic theory, but easily with the Criminal Code, because there is nothing scientifically grounded in them and not a single one was crowned with success. 1998 in Russia was 34 of the donor region, in 2006, 22. Today, 10 is left. Most regions can not contain themselves. The stagnation has passed into recession, there are no serious development priorities, judging by the last speeches of those responsible for the economy. Adopted an economic strategy. But she does not give an idea about the future path of the country. It turns out that in the next three to five years the decline in production will continue.

The second year there are Western economic sanctions. On 40 percent, imports shrank. It seems to be good - to buy less abroad. But at least the same 40 percent should grow its own production. And nothing of the kind is observed, even in agriculture, the sowing of vegetables and potatoes and other crops are reduced. We are talking about import substitution. What about if we do not replace? Just found other importers.

“We had the Deputy Prime Minister of the Russian Federation Arkady Dvorkovich at the State Duma meeting,” Arefyev reminds. - He said that there is import substitution. This is from the series "If someone here and there sometimes." Crumbs that have no value in macroeconomic indicators. "

Last year, when the dollar rose sharply, the price of imports also went up. In any state would take advantage of the situation to develop their own industry. And we have? The discount rate blocked all loans. Money does not go to the economy, although 21 trillion rubles is placed on deposits in banks. Of these, for 10 months, 2015 of the year was issued to total 360 billion investments, only six percent of the total investment. The credit system does not work, as the loan interest is extremely high.

"In the Volgograd region over the past two years, the shipyard, JSC Khimprom, aluminum, tractor, ball bearing, plant of drilling equipment," are closed, Arefiev lists. What caused the disaster industry? That we have a cult of sterilization of money supply. It has long been no longer on posts in the government of Kudrin, but his cause lives on. The monetization level in our economy is only 42 – 45 percent, and in developed countries 80 – 120 percent, in China 200 percent.

Kudrin's successors, like a mantra, repeat: we do not need a lot of money, there will be inflation. But Yevgeny Primakov and Yuri Masliuk, who saved the country from the economic abyss after the default of 1998, stressed more than once: do not confuse the increase in money supply with inflation. We have in addition to bank deposits of the order of 500 billions of dollars in sovereign funds. Why doesn't this money work?

This question was asked to Prime Minister Dmitry Medvedev, and his deputy, Arkady Dvorkovich, Arefyev reminds. To no avail. And what can be answered if the Russian Federation persistently sends money to the United States at a ridiculous percentage. In 2015, for example, under 0,27 pa.

There is not enough cash in the state, and we are driving money abroad: to France, Germany, anywhere. The Americans seem to be listed as enemies, and in August 2015 th in their securities we invested 3,5 billion dollars, in 2016 th - another 1,5 billion. Is it time to bring to justice those who do it? Meanwhile, in Russia, hospitals, kindergartens, schools, factories and factories are choking from lack of money.

They explain to us: it is safer to keep money in the West. But why keep them instead of investing in the development of the country. Or the government does not understand that if you invest a ruble in the economy in January, you will get two in December. There are industries with a quick payback. All this, however, requires work, and not sifting through pieces of paper and empty declarations. 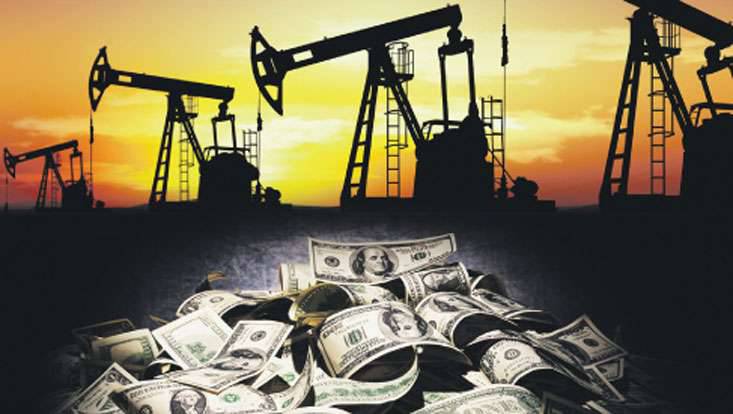 Any factory, factory can be suffocated without giving means. But along with them die kindergarten, school, hospital. That’s what the 2016 budget says. We have reduced allocations for health care, education, and social support. So next year they will degrade further.

And if you really do not have enough money, why not look for them properly. In 34 countries, there is a progressive income tax, which is completely true. The pensioner and the oligarch do not have to pay at the same rate. There is a progressive income tax in Sweden, France, the USA, Germany ... Deputies from the Duma Committee on Economic Policy, Innovative Development and Entrepreneurship tried to introduce a similar law that 4,7 could give trillion rubles, but they got their hands.

The same deputies offer: then let's introduce currency control, otherwise the speculation in the courses will continue, we will not be able to stop the inflation and the fall of the ruble. But even here the high leadership stands its ground: there will be no currency control.

Recall: right after the war, 1500 plants were opened annually, because jobs were needed, a mass of commodities was needed. “I work in the Economic Policy Committee. Do you know what we do? Creating a competitive environment, investment climate. How these categories are measured - in kilograms, tons or meters, I don’t know, but the money for everything goes regularly, but there is no result, ”Arefiev wonders.

All economic policy comes down to making money from the pockets of citizens, and not to make money.

The same with small business. In words, it is the basis of economics. In fact, last year real estate tax began to count on the cadastral value. The rent went up two to three times. In the first quarter of 2015 alone, 300 000 small businesses were destroyed.

In rural areas, land and property taxes increased tenfold. As a result, crops of potatoes decreased by 17, vegetables - by 24 percent. An example was given at the conference: “80 percent of potatoes are grown at private farmsteads, 70 percent of vegetables and half of livestock. But in August, 2015 in the government came up with the decision to limit the livestock: no more than 20 - small and five - cattle. Voluntarism is worse than Khrushchev! Thank God, after the protests, the restrictions were lifted. ”

Laws to increase fiscal burden are born one after another. Collection for the overhaul of the housing stock (500 – 1500 rubles), resort - 150 rubles per day. Three rubles per kilometer with truckers. Shameful employment tax. An old woman who knits socks and sells is obliged to buy a patent. Without it, six years for illegal entrepreneurship.

“Nobody considered the situation with truckers,” states the coordinator of the working group of the Expert Council of the State Duma Committee on Transport, Yuriy Nagerniak. - Before the introduction of the Rotenberg tax, the income of truckers was 60 – 70 thousand rubles, of which 30 thousand went for running costs: fuel, repairs, spare parts, etc. The average age of trucks is over 19, so that spending it will only increase. One of the consequences is the rise in prices, the other is that the industry will simply collapse. No one is lucky at a loss. ”

Under the “economist” Gaidar, society was inspired that the plan and the market were incompatible. But what do we see in the most competitive Russian companies? In Gazprom, LUKoil, Rosneft - everywhere there is a plan and quite hard. Vyacheslav Solovov, formerly Deputy Chairman of the Central Bank, made dozens of credit and cash plans of the Soviet Union with his own hands, attended government meetings, including under Kosygin, Ryzhkov and Primakov: “Why is everything so pitiable? Because we do not have a crisis, but the result of mediocre economic management by the liberal bloc of the government, the Central Bank, the State Duma. This was already the case when Gaidar and the notorious Jeffrey Sachs managed the economy. In 1992, it was proposed that, as a way out of the situation, an intersectoral offset be used to eliminate the system of non-payment. I tried to explain to Anatoly Chubais: there will be no emission, this is basically a technical operation - to set off, to figure out so that everyone can pay for the changed situation. He then shook my hand and said: "Vyacheslav Ivanovich, you are right, but we will do it our own way."

With this approach, the country is unlikely to achieve anything. Now the “Strategy-2030” is being developed, but very few people know about it. The most important document is born in the quiet of offices. So, no one guarantees that we will not step on the old rake again.

Many of our ministries, departments, the Central Bank and the largest public corporations are under the control of American audit services, in particular Pricewaterhouse Coopers. And they can, as they say, get into any affairs of our structures. Having gained independence in 1991, in fact, Russia agreed to the economic dictates of the US, Western financial organizations such as the IMF and the WTO. The ruble was and remains rigidly tied to the green rate. Although even Iran has already declared that it will not sell oil for dollars.

If we want to gain real independence and not rely only on military force, we must begin with the modernization of the economy. Politics, emphasized the classics, just its concentrated expression.

Ctrl Enter
Noticed oshЫbku Highlight text and press. Ctrl + Enter
We are
Way out of chaosProfit and Parisian streets since the Nazi occupation
169 comments
Information
Dear reader, to leave comments on the publication, you must to register.