February 17 2016
156
The Council of Ministers of the countries of the European Union, almost in unison, approved the lifting of the majority of sanctions measures from Belarus and from a number of its citizens. The euroministers decided to remove the sanctions imposed earlier and in some cases for more than 10 years by 170 government officials (both acting and retired). The Belarusian president, who automatically lost his demonic “title” - “the last dictator of Europe”, also fell under the program of lifting the sanctions. Who else from the Belarusian citizens removed the Euro-sanctions, which were suspended for about 4 months ago? Here is just a small list:

In Brussels, they considered that for the sake of pro forma it was necessary to leave at least someone on the “black list”, and this “someone” turned out to be completely the former - those who in the EU are usually associated with “persecution of freethinking”. Considering the fact that none of the existing ranks remained on the EU sanctions list, Brussels decided that he killed two birds with one stone (in the Belarusian case it would be better to have “bunnies”): nothing serious is on the list, but at the same time the fact of list - they say, we are still concerned ...

He left in the list of sanctions the European Union and such an item as the supply of weapons, military equipment and technologies in the field of defense to Belarus. In principle, it is also a point left for a tick, since the Belarusian market has long been focused entirely on other suppliers of weapons and military technology.

So, the preliminary conclusions: the accounts of Belarusian companies frozen earlier are being unfrozen, the President of the Republic of Belarus, after a long period of time, is able to visit the countries of the European Union, the conclusions of the Belarusian CEC are recognized de jure.

In this regard, the main question that Belarusians themselves are asking is: why suddenly? Why has Europe been dancing a strange dance for a long time, declaring Belarus almost the basis of the “axis of evil” in Europe, and the Belarusians themselves “obstinate by dictatorship, people deprived of their rights, freedoms and hopes for a bright democratic future”, and the b-bang - a cardinal reversal?

A whole series of explanations and arguments are presented on this score, presented by well-known political scientists from Belarus and Russia, as well as by representatives of the media and the blogosphere. It is worthwhile to present the main thoughts about the reason why the European “partners” have suddenly become more friendly in relation to Minsk.

The idea of ​​the first (coffee-geographical):

After many hours of consultations of the so-called "Normandy Four" (February 2015), held in the "President Hotel" of the Belarusian capital, many of the European politicians, distracted from news of CNN and Euronews issues unexpectedly found out that Minsk is, it turns out, also in Europe. We found out that Angela Merkel and Francois Hollande are not being treated to aromatic coffee by a dictator with traces of freshly drunk children's blood on the corners of his mouth, not sparkling with steel, sharply sharpened teeth, but by an ordinary person - by the President of Belarus Alexander Lukashenko. The Europeans tried to see the horns under the Belarusian leader's hairstyle, but the Belarusian leader's hairstyle more than openly demonstrated the fallacy of the image that European officials drew for themselves ...

Then someone exclaimed: why didn't we see this man, who was welcoming the entire “Norman four” with coffee and pancakes, aiming for a settlement in the Donbas, in Brussels. And someone, the most knowledgeable, remembered: so he (as well as under two hundred Belarusian citizens) is under our economic sanctions! And when they remembered that Alexander Grigorievich did not recognize the independence of South Ossetia and Abkhazia, as well as the Russian jurisdiction of the Crimea with Sevastopol, they were completely moved ... What, they say, are weavers or something? Acceleration of demonstrations? - they say, comparing photos of Minsk of past years and Ferguson of the recent past, - who does not happen. In the end, they slapped hands, deciding that sanctions against Alexander Grigorievich and the whole of Belarus were not the case. 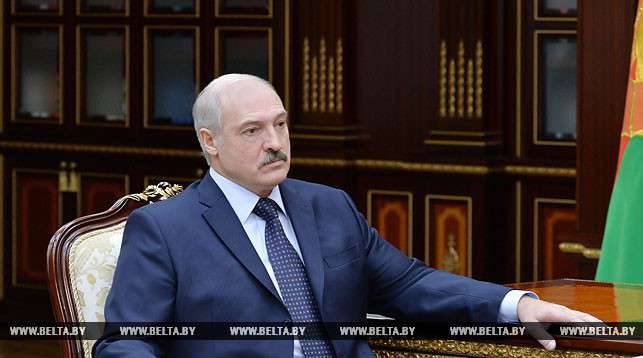 The Europeans considered how many billions of euros per year they lose on sanctions against Russia and Russian counter sanctions, and decided that the doorway for European goods to Russia should be tried to be pierced again. And when someone from the European officials (and in this case, the most knowledgeable) remembered that during the trip (as a guest of the Russian capital) to one of the Moscow restaurants, he had tasted Belarusian salmon and Belarusian oysters there, the thought process went more actively. Indeed, in this situation, Belarus may well act as a sort of trade (transit) paradise for both the European Union and Russia. The paradise is silent - without excessive pompousness about the restoration of the growth of commodity turnover between the EU and the Russian Federation, but with the pompousness of a jump in the volumes of mutual trade between the EU and the Republic of Belarus, and between the Republic of Belarus and the Russian Federation.

If you can sell Belarusian oysters in Russia, then why Europe can’t sell Belarusian gas that is truly diversified, with all the consequences for the so-called third energy package and its prohibitive measures, were decided by Europeans, who used to take the money and understand that sanction columns (pillars) is ...

The idea of ​​the third (gingerbread-mama):

In Europe, they decided that if for a long time the sanctions against Belarus were not convincing the Belarusians of the need to arrange the Belarusian version of the Tahrir-Maidan, and that any Tahrir-Maidan But father could be extinguished even in the embryo of his flame, then they knew that the tactics had to be changed. Whip - did not help, so let's try to give them a carrot. What if the lifting of sanctions and some economic indulgences will allow Belarus to be torn off from Russia with the simultaneous striving of the first towards European values, as the policy requires you know who - their most unique and exceptional ...

Who said that the Europeans themselves decided to lift the sanctions? As not the Europeans themselves imposed the sanctions, they did not print the paper themselves with the approved abolition of the sanctions packages. It is somewhat naive to believe that, for example, the Baltic artists of the political tent suddenly decided to announce their intention to restore friendly relations with Minsk. Yeah ... It’s just that Washington decided to try out a new strategy for lifting sanctions measures in an attempt to "participate" in the destinies of such states as Belarus and, for example, Iran. I decided to achieve the goals by the approach method on the other hand, and therefore I lowered the “top” paper that the euroministers signed in one burst.

Now the question is: which EU country will the Belarusian leader choose for the first post-sanctional visit, and will it choose?

Ctrl Enter
Noticed oshЫbku Highlight text and press. Ctrl + Enter
We are
Belarusian nationalism is a weapon of the West against RussiaLukashenko gave a detailed interview to Russia Today journalists
156 comments
Information
Dear reader, to leave comments on the publication, you must to register.