February 17 2016
48
At the conclusion of the Munich Security Conference, Russian Prime Minister Dmitry Medvedev gave an interview to Euronews, as well as to the popular Time magazine. The conversation was about the Syrian crisis, the conflict in Ukraine, Russia's relations with the West, the Litvinenko case and, of course, sanctions. Relying on Comrade Bulgakov’s artistic theses, the Prime Minister declared that “we will never ask for the lifting of these sanctions.” 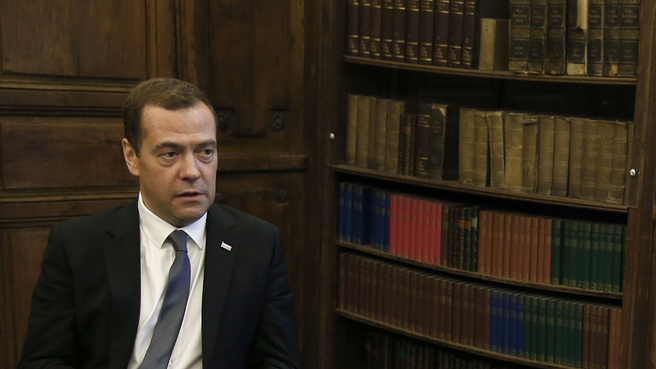 The text (transcript) of D. Medvedev's interview to Time magazine is provided. on the website of the Russian government. Questions Medvedev asked Simon Shuster.

The question of sanctions was formulated as follows: “By the way, about relations with Western partners. You talked a lot in your speech today about sanctions, about how they harm relationships. How, perhaps in informal conversations, did your European colleagues respond to this call to cancel them and what is hindering this? ”

“You know, it somehow happened to me,” said Medvedev, “that under these sanctions, no matter who I said, for some reason everyone lowers their eyes, down to the floor, as if they have no relation to this, and they say: “Well, yes, it was accepted there. We, of course, against. In general, all this is bad, business interferes. We all understand this perfectly. But you let the Minsk protocol go faster there, implement the Minsk agreements, do it quickly. But in general, we have nothing to do with it. ” But this is not a completely honest position. This is a consolidated decision of all our European friends. They all voted for it. Nobody blocked, no one spoke against. So this is a consolidated position. And do not be shy. Tell me honestly that we wanted to punish you. ”

Did sanctions punish Russia? Medvedev does not think so: “Probably, we got some unpleasant moments somewhere. Strong? Not too much. We develop, we live, naturally, we will survive. Political position changed by the authorities of the Russian Federation? Not changed. Have the support of the population of the Russian Federation? You know very well, they have, and another one that no political force here has, because no one likes being pressured on your country. ”

According to the prime minister, Russia will not ask the West to lift the sanctions: “We are discussing all this, but our position is simple, I have repeatedly stated it: we will not ask anything. You know our literature well. Mikhail Bulgakov has a beautiful phrase in the book “The Master and Margarita”, when Woland says that you never ask anything, they will offer it themselves and they will give it all. So we will never ask for the lifting of these sanctions. Themselves will come and say: let's finally get rid of all this, because no one is better, everyone is only worse. "

Also on the margins of the Munich Security Policy Conference, the Chairman of the Russian Government answered the questions of the author and presenter of the Global Conversation program, Isabel Kumar (Euronews TV channel). D. Medvedev answers given on the government website.

The leading question about sanctions was: “One of the consequences of the deterioration of relations was the introduction of sanctions. Sanctions, which were imposed on Russia, cause serious damage. Tell me, is it a priority for your government to get these sanctions lifted? ”

D. Medvedev explained to the presenter that it was not Russia who invented the sanctions, and advised the West to announce their cancellation "from just such a date."

“Usually we say in such cases: we didn’t come up with these sanctions, we don’t have to start lifting them,” he said. - I have already answered this question in part when I answered the previous one. But they told us: you are not good, and we will punish you. And then they counted and shed tears - it turns out that it hits business. ”

“We didn’t think up this, we don’t have to start abolishing it. We were frightened all the time by sanctions, these sanctions were introduced in the Soviet period many times. It never led to anything, only money was lost. And now will be the same. We must have the courage and say: you know, guys, everything, we are completing this from such and such a date, and we also ask you to stop the response measures. This will be the right approach. ”

As for the West, we will add, he does not intend to complete the sanctions. This was made clear to US Secretary of State John Kerry, who is unhappy with the "settlement" in the Donbas.

Sanctions against Russia will be effective until Moscow fulfills all points of the Minsk agreements on a peaceful settlement in the east of Ukraine, said John Kerry. "Russia has a simple choice: fully implement the Minsk agreements or continue to endure sanctions that cause economic damage", - quotes Kerry "BBC".

“Sanctions will never end on their own,” said the state secretary.

“However, we should not forget why they were initially introduced: in order to defend the fundamental rights of Ukraine - its sovereignty and territorial integrity. Simply put, Russia can prove by its actions that it respects Ukrainian sovereignty just as it insists on respecting its own, ”Kerry stressed.

Probably, these words contained a hint of the Crimea.

What do Russian experts think about Western sanctions?

“Recently, we are increasingly hearing from Europeans a proposal to first cancel our counter-sanctions, and then we will think whether to cancel their own measures,” said "Free Press" Dean of the Faculty of Sociology and Political Science of the Financial University Alexander Shatilov. - This is, to put it mildly, not a constructive approach. In such a situation, it is the West as the initiator of the trade and economic war, who first applied sanctions, must make concessions, and not vice versa. ”

Of course, Russia is experiencing problems in the economy, however, according to the expert, much greater difficulties are created not by sanctions, but by low oil prices. Sanctions can even be an aid to development: “Certain problems of sanctions do cause, but they cannot be called super-heavy. A much greater difficulty is created by the fall in oil prices and the deterioration of the energy situation on the world market. As for the sanctions, we will live with them. Moreover, for some industries they open up new opportunities, for example, for the same agriculture or pharmaceuticals. For many enterprises, sanctions eliminated potential competitors and gave impetus to development. ”

Political analyst Sergei Mikheev did not rule out that the West would abandon the policy of sanctions, realizing their inefficiency.

“It all depends on whether sanctions will bring the desired result to the West,” he said, “SP”. - This kind of restrictions can act for a long time, but, as practice shows, over time, their cancellation is possible. Two examples that are now widely known are Iran and Belarus. At one time, sanctions against them were imposed under various pretexts, but for political reasons. The main goal was to change the political regime. But, despite the fact that the restrictions operated for a long time, due to various factors, the regime change did not occur. Sanctions were unsuccessful. ”

The expert noted that the West still did not completely abandon the levers of pressure on Iran or Belarus. And nevertheless, it was decided to cancel the sanctions against them, because they did not bring the desired result, but caused damage to the West itself. “Theoretically, the same can happen with sanctions against the Russian Federation,” said the political scientist, “which cause inconvenience to the countries of Europe.” But to be honest, I don’t think it can happen soon. ”

The abolition of US sanctions and their "partners" and allies, including the EU states, which in their entirety dance under the tune of the hegemon, would greatly spoil the political face of both Washington and Brussels. After all, the sanctions were imposed not only because of the conflict in the east of Ukraine, but also because of the annexation of the Crimea to Russia. The leaders of the West noisily declared that they "never recognize" neither this accession, nor the outcome of the Crimean referendum held "at the point of the guns."

And if suddenly the West decides to “come by itself”, to act according to Medvedev, who referred to a literary classic, then the price on the world stage will be worthless to all the statements and promises of Washington and Brussels. In fact, thus the West recognizes the Russian Crimea. The White House cannot allow such an historical turn in any way, and therefore it is not necessary to wait for the lifting of sanctions in the coming years. You can wait for any talk about indulgences in connection with the next negotiations. But no more than that.

Observed and commented on Oleg Chuvakin
- especially for topwar.ru
Ctrl Enter
Noticed oshЫbku Highlight text and press. Ctrl + Enter
We are
Litvinenko case: who and how is looking for the truthLitvinenko: polonium trail leads to the Kremlin, but in a bizarre way
48 comments
Information
Dear reader, to leave comments on the publication, you must to register.