February 13 2016
237
The phrase “we live in an interesting time” after an event that took place at night (Moscow time) from 12 to February 13 loses its last tinge of banality. It has been expected for hundreds of years, a couple of decades has been prepared, and now it has come to pass. The meeting of the heads of the two largest Christian churches took place. On Liberty Island (and this is especially symbolic), Patriarch Kirill, the highest hierarch of the Russian Orthodox Church, met with the head of the Roman Catholic Church, Pope Francis. And the symbol of this meeting was not only that it took place, as already noted, on Liberty Island, as Cuba is called. The characters literally permeated the entire meeting of Cyril and Francis. It began with the traditional RUSSIAN ORTHODOXY a triple welcome kiss from supreme hierarchs. And this in itself emphasized that the Roman Catholic Church (at least in the person of Francis), who for centuries tried to ignore the very existence of an independent Russian Orthodox church, decided to abandon its previous policy for the benefit of the main idea - the idea of ​​the unity of all Christians without exception with the preservation of the traditions of each of the world-recognized Christian currents. 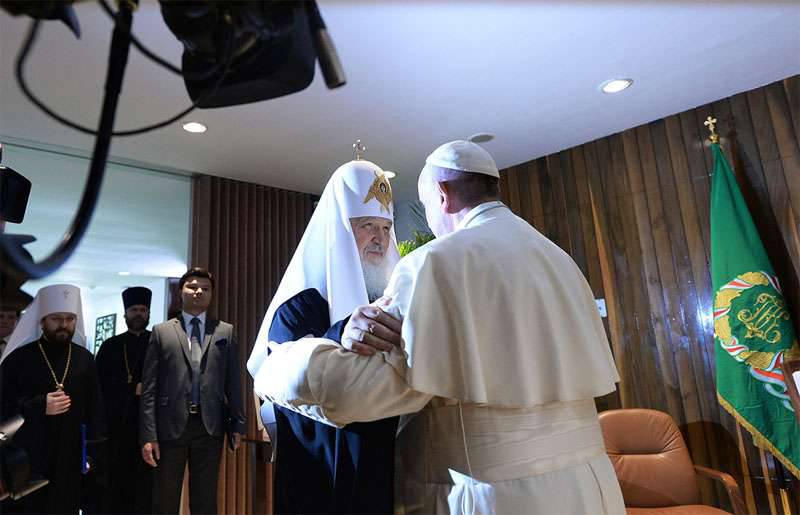 On the frames that came from the Jose Marti Havana airport, where the meeting took place, it was noticeable how the hierarchs of the two Christian churches initially fought with excitement. And this excitement manifested itself, in all likelihood, not so much because their names at that instant entered history and the church, and the whole of civilization, how much on what problems they have to discuss. And the problems are truly global in scale.

Chief among such problems is the frightening disunity of the vast Christian world in the face of new threats. Among these threats, of course, special attention is paid to attempts to oust Christianity from the Middle East - in fact, from the place where Christianity appeared and gained its first loyal supporters. The Christians of the Middle East and not only, by the way, his, have become targets for terrorists and extremists of all stripes. Persecution of Christians, the destruction of Christian churches (regardless of whether they belonged to a particular branch), mass executions, the desecration of Christian shrines, unfortunately, have become an integral attribute of reality in a number of countries around the world. These are Syria, Egypt, Nigeria, Iraq, this is the province of Kosovo, the current authorities of which try to call themselves democratic and, moreover, independent, but in fact support extremist groups that actually destroy the Christian component in this region. The number of Christians in the same Iraq over the past decade has declined more than tenfold! Kosovo Christians are forced to either move to the northern provinces, or simply leave the province.

Discussion of the problems of modernity by Patriarch Cyril and Pope Francis lasted more than two hours. As a result, a multi-page declaration was finally approved, which reflected the views of the supreme hierarchs of the Russian Orthodox Church and the RCC on events taking place in the world, including numerous wars and armed conflicts that swept the regions of the planet and claimed tens or even hundreds of thousands of lives.

Before the discussion, the primates of the two Christian churches presented each other gifts, which also traced a certain symbolism. Patriarch Kirill presented Pope Francis with a list of one of the most revered icons in the Orthodox world - the Kazan Icon of the Mother of God as a symbol of absolute trust and focus on working together, on serving together. The pope presented to the patriarch as a gift a part of the relics of his heavenly patron, the Holy Equal-to-the-Apostles Cyril, one of the saints, who performed an outstanding mission to consolidate Eastern and Western Christianity. 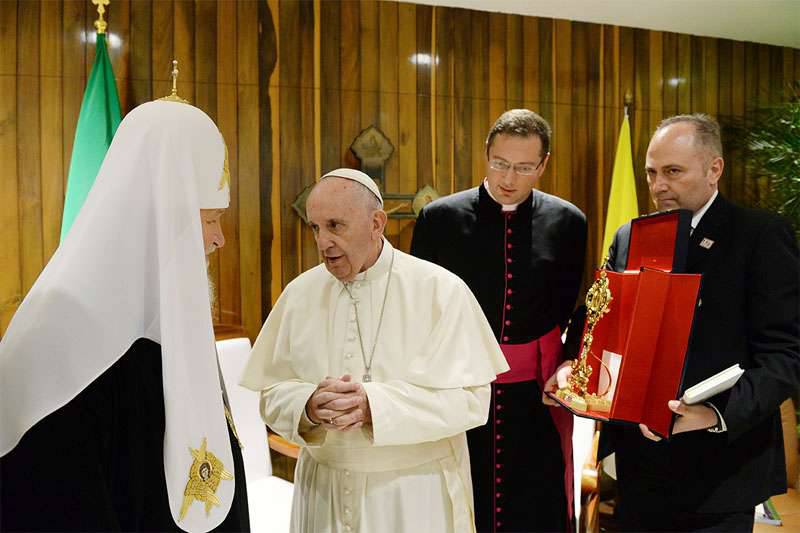 From the joint statement of the supreme hierarchs (press service of the Moscow Patriarchate):
Our gaze is turned to people in dire straits, living in conditions of extreme need and poverty at a time when the material wealth of humanity is growing. We cannot remain indifferent to the fate of the millions of migrants and refugees who are knocking on the doors of rich countries. (...) The unbridled consumption characteristic of some of the most developed countries is rapidly depleting the resources of our planet, and the growing inequality in the distribution of earthly goods increases the sense of injustice of the spread system of international relations. The Christian Churches are called to uphold the demands of justice, respect for the traditions of nations and effective solidarity with all those who suffer.

During the meeting, the problem of so-called uniatism was also discussed, the principle of which is that the unity of church communities is based on the separation of one of these communities from their church. As is known, this principle is still being attempted to be implemented in a number of countries in Eastern Europe, including Ukraine. For the first time in history, the Orthodox Church and the Catholic Church came to a single interpretation of the phenomenon. From the declaration of the Patriarch of Moscow and the Pope:

The method of "uniatism" of former centuries, which involves bringing one community into unity with another by its separation from its Church, is not a way to restore unity. At the same time, church communities that emerged as a result of historical circumstances have the right to exist and undertake everything necessary to satisfy the spiritual needs of their faithful, seeking peace with their neighbors. Orthodox and Greek Catholics need reconciliation and finding mutually acceptable forms of coexistence.

The supreme hierarchs of the ROC and the RCC emphasize that their meeting in no way bore the character of proselytism, that is, it was not aimed at any attempts to convert this or that flock to a new faith for it. From the joint declaration:

Orthodox and Catholics are united not only by the common Tradition of the Church of the first millennium, but also by the mission of preaching the Gospel of Christ in the modern world. This mission involves the mutual respect of members of Christian communities, excludes any form of proselytism.

And, perhaps, the key phrase of the entire declaration:

We are not rivals, but brothers: we must proceed from this understanding in all our actions in relation to each other and to the outside world. 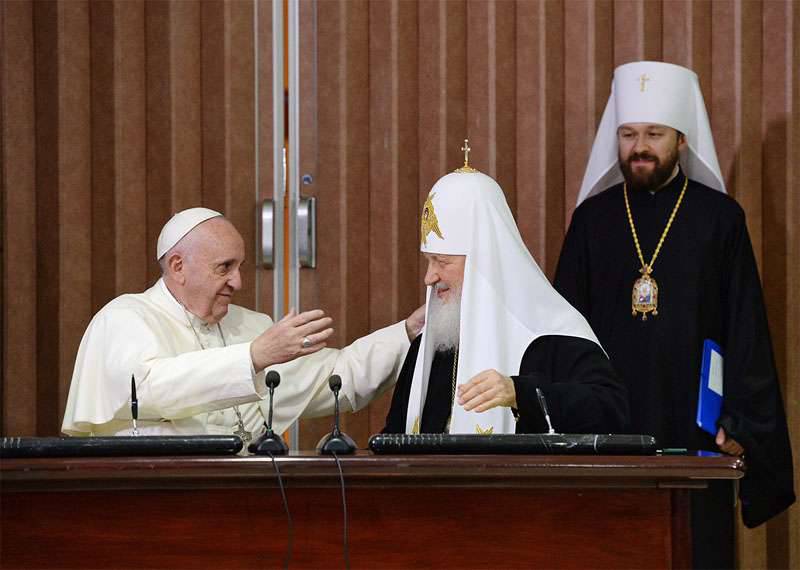 And this is a real breakthrough in relationships. Well, if not the breakthrough itself, then certainly a hint of a breakthrough. Catholics and Christians are brothers (at least the supreme hierarchs of the two churches) did not name each other never. Therefore, I sincerely want to hope that the spirit of destructive rivalry between Catholicism and Orthodoxy, which at one time also led to a lot of blood, has become obsolete. And if the main step in the direction of pragmatic rapprochement on the basis of mutual consideration of interests is made, then the meeting of Patriarch Cyril and Pope Francis may well become a model both for hierarchs of other religious movements, and for politicians of our time, who often believe that dialogue is the last thing it is worth going for the resolution of global problems, and seeing as the resolution of such problems an exceptionally strange policy of sanctioning political and economic pressure.

Ctrl Enter
Noticed oshЫbku Highlight text and press. Ctrl + Enter
We are
Results of the week. “A miracle happened! A friend saved the life of a friend! ”Genocide of Christians in the Middle East. Millions of people have become a bargaining chip for American geopolitics
237 comments
Information
Dear reader, to leave comments on the publication, you must to register.