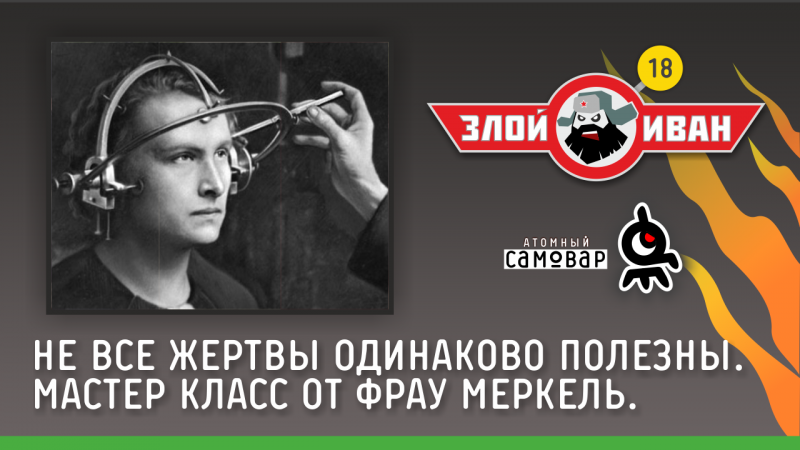 "In recent days, we were not just shocked, we were horrified by the kind of suffering that tens of thousands of people brought the bombing, primarily from Russia" -
German Chancellor Angela Merkel.

When the Americans and the German Luftwaffe loyal to them bombarded Yugoslavia, Iraq, Libya, Afghanistan, the West was silent ... When Israel invaded Lebanon, destroying and destroying cities with civilians, it was quiet ... Turkish troops have been killing Kurds for many years in a row. .. And in Yemen, the Wahhabi coalition led by Saudi Arabia is bombing the city with a peaceful population, and not a word. And more recently, their son of a bitch Poroshenko staged a genocide in Ukraine, bombed the Donbass - civilized Europe again was silent and even more, gave him credits for it.

But there are thousands of dead and tens of thousands of crippled civilians everywhere. Documented crimes, photo and video evidence. But the civilized west is not interested. Boring After all, they are accustomed to consider their crimes as a virtue. Therefore, old Merkel was silent then ... But now she burst through.

As soon as the Russians decided to clean up all evil spirits from Syria, and the Syrian Army, with the support of the Russian Aerospace Forces, began to achieve success, the old bitch screamed about the suffering and sacrifices of the civilian population. And about the innocent victims of the kids remembered. Where do without them?

The bearded children, hiding behind their backs the automata, began to cry in a friendly chorus to the Western media and complain about the evil Russians who came to innocently offend them.

But more recently, these same bearded plags were cutting heads of civilians at the camera, burning them alive, raping and driving people into slavery ... And the old bitch Merkel strenuously pretended that this is normal, it is not scary ... Well, apparently, the traditions in the east are ... And she was somehow not interested in the fate of the perishing thousands of civilians.

It was at that time that a flood of refugees poured into Europe. People fled, saving their lives from terrorist insanity, from ISIL, from armed gangs, the so-called oppositionists, who differed from each other and from ISIL only by their flags and emblems.

And the other day an inadequate old lady blamed Russia for the invasion of refugees in Europe.

Come on, I’ll remind you purely of tediousness that refugees rushed to Europe with organized herds at the beginning of 2015. And in the idiotic attempt to expose Bashar al-Assad as a bloody dictator, all the refugees from Iraq, Afghanistan, Turkey, Tunisia, Egypt, Libya, Syria, Yemen - he was called Syrian refugees. And Russia began a military operation in Syria only with 30 September 2015 of the year. That is, 10 months after the start of the invasion of refugees.
So the facts and reality refute the narcotic, Russophobic nonsense Frau Merkel.

Mental degradation. Believing in one’s exclusivity and ignoring reality. The pathological habit of calling black white and terrorists peaceful protestants and rebels. Hypocrisy and lies. Isn't it time to recognize Europe as insane and mentally ill? And start compulsory treatment?

The closer the Syrian army, with the support of the Russian Aerospace Forces, is approaching victory over the terrorists, the louder in Europe and the United States will be the screams of innocent victims. There will be even more lies, mean things about Russia and the Russians. Do not mind it! We do everything right. We save the world! Others just can't do it!

Everything! Believe in your people and your country! Victory will always be ours!
Like and subscription if you share my views! See you soon!
Video to the article.
Not all victims are equally useful. Master class from Frau Merkel. Evil Ivan №18 with Ivan Victory

The Russian tank has already taken a run, so it’s best not to get in its way. Crush and not notice. A little more and we will not stop. =)
Therefore, scum from all the cracks, screeching, snot, drooling, accusations, threats and prayers.
I hope that the Ministry of Defense will send all these rats to the forest and continue their righteous deed to clean the planet from evil.

Ctrl Enter
Noticed oshЫbku Highlight text and press. Ctrl + Enter
We are
Hitler's loyal followersKurdish question in modern Syria
200 comments
Information
Dear reader, to leave comments on the publication, you must to register.