Royal "Dreadnought": a famous story without a single shot

February 14 2016
27
February 10th. / TASS /. Exactly 110 years ago, on February 10, 1906, the British military ship Dreadnought was launched in Portsmouth. By the end of that year, it was completed and entered into the Royal fleet.


“Dreadnought”, combining a number of innovative solutions, became the ancestor of a new class of warships, to which he gave his name. This was the last step to the creation of battleships - the largest and most powerful artillery ships ever to go to sea.
However, the “Dreadnought” was not unique - the revolutionary ship was the product of a long evolution of the battleships. Its counterparts were already going to be built in the USA and Japan; moreover, the Americans began to develop their own dreadnoughts even before the British. But Britain was the first. 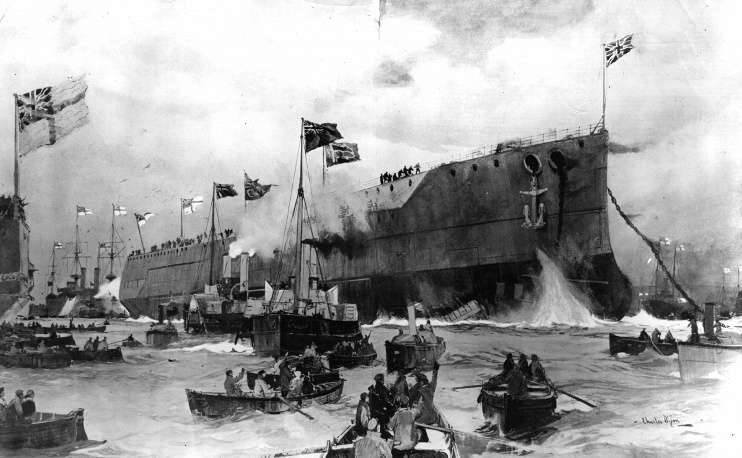 Business card "Dreadnought" - artillery, consisting of ten guns of the main caliber (305 millimeters). They were complemented by many small 76-millimeter guns, but the intermediate caliber on the new ship was missing altogether.

Such weapons are strikingly distinguished "Dreadnought" from all previous battleships. Those, as a rule, carried only four 305-millimeter guns, but were supplied with a solid battery of medium caliber - usually 152 millimeter.

The habit of supplying battleships with a multitude — up to 12 and even 16 — medium-caliber guns was easily explained: 305-millimeter guns reloaded for quite a long time, and at that time 152-millimeter had to shower the enemy with a hail of shells. This concept proved its worth during the war between the USA and Spain in 1898 - in the Battle of Santiago de Cuba, the American ships achieved a disappointingly small number of hits with the main caliber, but literally riddled the enemy with medium caliber riflemen.

However, the 1904-1905 Russian-Japanese War demonstrated quite another thing. Russian battleships, which were much larger than Spanish ships, withstood a mass of hits of 152-millimeter cannons - only the main caliber caused serious damage to them. In addition, the Japanese sailors were simply more accurate than the American ones. 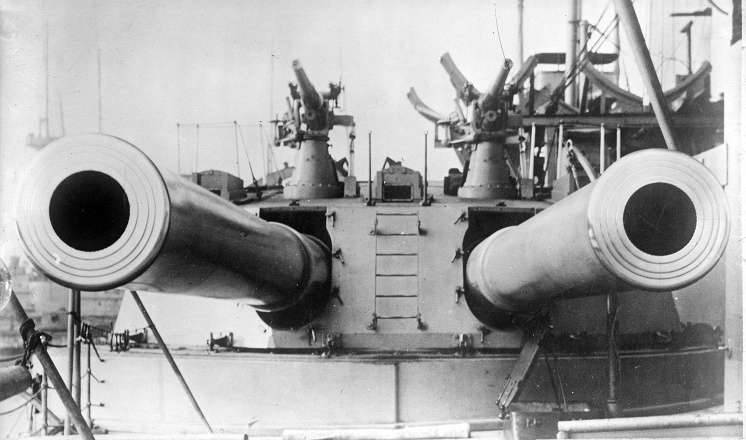 Authorship of the idea

The concept of the battleship, equipped with extremely heavy artillery, is traditionally considered to be the Italian military engineer Vittorio Cuniberti. He proposed to build a battleship with 12 305-mm guns, a turbine power plant using liquid fuel and powerful armor for the Italian Navy. The Italian admirals refused to implement the idea of ​​Kuniberti, but allowed it to be published.

In Jane's Fighting Ships, 1903 had a short year - only three pages - an article by Kuniberti "The Perfect Battle Ship for the British Navy." In it, the Italian described a giant battleship with a displacement of 17 thousand tons, equipped with 12 305-millimeter cannons and extremely powerful armor, but also capable of developing speed in the 24 node (which made it a third faster than any battleship).

Just six of these "ideal ships" will be enough to defeat any enemy, considered Kuniberti. Due to his firepower, his battleship was supposed to sink the enemy battleship with one volley, and due to high speed - immediately proceed to the next.

The author considered rather an abstract concept, without doing exact calculations. In any case, it would be almost impossible to fit all Kuniberti's proposals into the ship with a displacement of 17 thousand tons. The full displacement of the real "Dreadnought" turned out to be much more - about 21 thousand tons.

So, despite the similarity of Kuniberti's offer with the Dreadnought, it is unlikely that the Italian had a great influence on the construction of the first ship of the new class. The article by Kuniberti was published at a time when the "father" of the Dreadnought, Admiral John "Jackie" Fisher, had already come to similar conclusions, but in a completely different way. 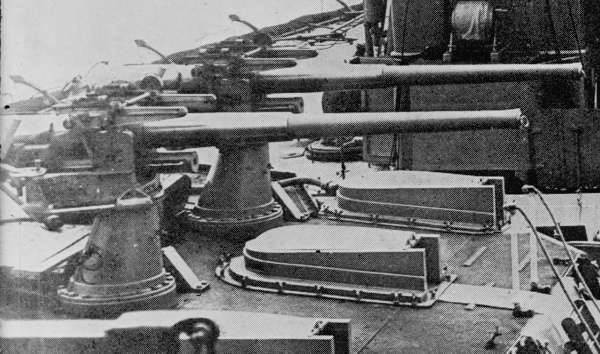 Guns on the roof of the tower. HMS Dreadnought, 1906 year
© US Library of Congress Bain collection
"Father" "Dreadnought"

Admiral Fisher, forcing the Dreadnought project through the British Admiralty, was guided not by theoretical but by practical considerations.

While still commanding the British naval forces in the Mediterranean, Fischer empirically found that shooting from mixed guns makes aiming extremely difficult. The gunners of that time, aiming the cannons at the target, were guided by bursts from the shells falling into the water. And at a long distance bursts from millimeter 152 caliber shells and 305 shells are almost impossible to distinguish.

In addition, the then existing rangefinders and fire control systems were extremely imperfect. They did not allow to realize all the capabilities of the guns - the British battleships could shoot at 5,5 kilometer, but according to the results of actual tests, the recommended aimed fire of target fires was just 2,7 kilometers.

Meanwhile, it was necessary to increase the effective distance of the battle: torpedoes became a serious opponent of the battleships; at that time, the range of their torpedoes reached the order of 2,5 kilometer. A logical conclusion was made: the best way to fight at long distances would be a ship with the maximum number of main-caliber guns. 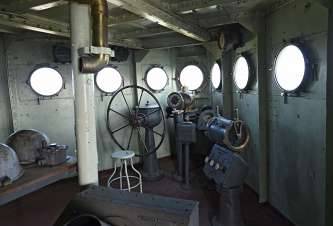 At some point, as an alternative to the future "Dreadnought" ship, equipped with a variety of 234-millimeter guns, which were then used by the British as a middle artillery on the battleships. Such a ship would combine the rate of fire with a huge firepower, but Fisher really needed "big guns".

Fisher also insisted on equipping the Dreadnought with the newest steam turbines, which allowed the ship to develop more than 21 nodes per hour, while 18 nodes were considered sufficient for battleships. The admiral was well aware that the advantage in speed makes it possible to impose on the enemy a favorable combat distance. Given the tremendous superiority of the Dreadnought in heavy artillery, this meant that several such ships were able to crush the enemy fleet, while remaining virtually inaccessible for most of its guns. 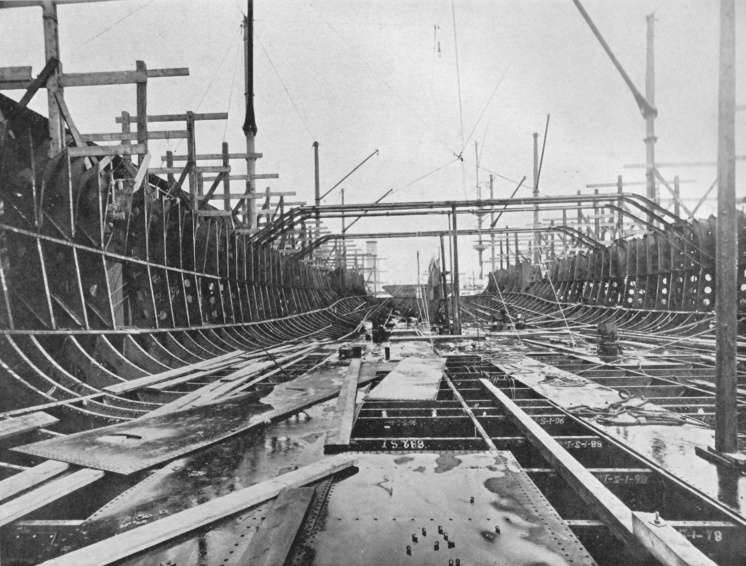 The Dreadnought was built in record time. As a rule, they call an impressive year and one day: the ship was laid on 2 of October 1905 of the year, and 3 of October of 1906 of the year the battleship entered the first sea trials. This is not entirely correct - traditionally, the time of construction is counted from the laying to the inclusion in the fleet combat. "Dreadnought" was commissioned on December 11 1906, a year and two months from the start of construction.

Unprecedented speed of work had the opposite side. The photos from Portsmouth show not always a high-quality assembly of the hull - other armor plates are crooked, and the bolts that fasten them are of different sizes. No wonder - 3 thousand workers literally "burned" at the shipyard on 11 and a half hours a day and 6 days a week.

A number of flaws associated with the project of the ship. The operation showed insufficient efficiency of the newest Dreadnought fire control systems and its rangefinders - the largest at that time. Rangefinders even had to endure so that they would not be damaged by the shock wave of a gun salvo.

The most powerful ship of the era never once fired at the enemy from its main caliber. The Dreadnought was not present at the Battle of Jutland in 1916, the biggest clash of fleets consisting of Dreadnoughts, it was being repaired.

But even if the “Dreadnought” were in the ranks, he would have to remain in the second line - in just a few years he was hopelessly outdated. He was replaced both in Britain and in Germany by larger, faster and more powerful battleships.

Thus, representatives of the type "Queen Elizabeth", which entered service in the 1914-1915 years, already carried the guns of the caliber 381 millimeter. The mass of the projectile of this caliber more than doubled the weight of the Dreadnought projectile, and these guns fired one and a half times further.

Nevertheless, the Dreadnought still managed to achieve victory over the enemy ship, unlike many other members of its class. His victim was a German submarine. Ironically, the mighty Dreadnought destroyed it not with artillery fire and not even a torpedo - it simply rammed the submarine, although the British shipbuilders did not equip the Dreadnought with a special ram.

However, the submarine sunk by the Dreadnought was by no means ordinary, and its captain was a glorified sea wolf. But it is already completely different. история. 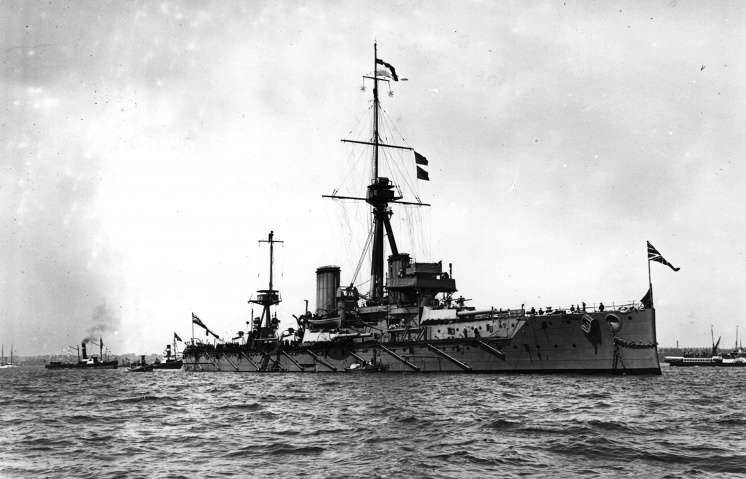 Ctrl Enter
Noticed oshЫbku Highlight text and press. Ctrl + Enter
We are
Conwy Castle - the royal castle of the "iron ring" of Edward I.
27 comments
Information
Dear reader, to leave comments on the publication, you must to register.