What new proposal for the restructuring of the Ukrainian debt did not accept Russia?

February 12 2016
100
Received its continuation история with a statement by IMF Managing Director Christine Lagard that Ukraine may not wait for the next tranche of financial assistance from the International Monetary Fund. The argument of Ms. Lagarde was about the following: Petya, Senya, where are the promised reforms? .. The continuation of the story is that a similar question to the representatives of the Ukrainian authorities is asked not only in the International Monetary Fund, but also in the camp of Ukraine’s European partners, just yesterday, together with Mrs. Lagarde, they were enraptured with the plans for Ukrainian reform.


One of the questioners is Germany. Yes, against the background of embraces opened in the direction of refugees from Africa and the countries of the Middle East, the old woman-chancellor still remembered that the anniversary of the Minsk agreements was “celebrated” these days, and that the second anniversary of “peremogi for Maidan. Ukrainian anniversaries sneak up unnoticed — one by one — and the squeaky cart of Kiev, not only does not move forward, also strives to roll back antidemocraticly. Frau Merkel and a number of other German officials, such a situation with Ukraine and its zombie economy is clearly beginning to strain.

This week it became known that Germany explained to Ukraine on its fingers that the 3 billion-dollar debt to Russia is not just another Maidan toy. Debts must be returned, otherwise no one will give more in debt. It turned out that the German Finance Ministry, led by the gray cardinal of modern German politics, Wolfgang Schäuble, acted as a kind of mediator in the dispute between Russia and Ukraine over the repayment of debt. Schäuble made his Ukrainian counterpart, Natalya Yaresko, a business proposal. The point is that Ukraine should present the conditions of restructuring to which the lender agrees to the creditor (Russia). 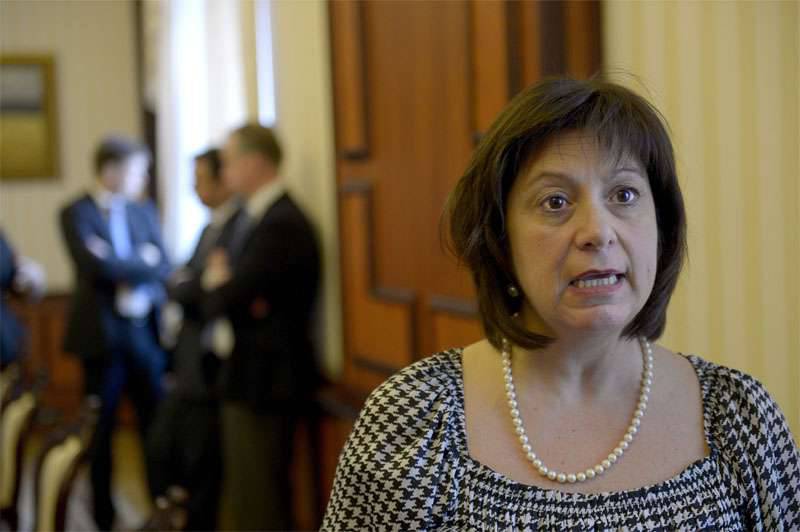 It should be recalled that by that time, Ukraine, represented by Prime Minister Yatsenyuk, offered Russia the following option of "restructuring": 20% write off immediately, and defer the remaining payments and stretch it to 2019. Moreover, Kiev called the writing off of 20% of debt the main “condition”, not especially, apparently, taking care that the debtor does not have to issue this condition.

Wolfgang Schäuble tried to explain this fact to the Ukrainian Panopticon, and it turned out that Mrs. Yaresko offered Russia some restructuring options. There is no exact data on which options Kiev was offered, however, from the statements of the Deputy Minister of Finance of Russia Svetlana Nikitina, yet something became known. There is information that the Ukrainian side has declared its readiness to fulfill credit obligations to the Russian Federation. But ... in the event that Russia abandons the definition of Ukrainian debt as a sovereign (state) and translates it into private debt status.

Well, this is a purely Ukrainian (Maidan) logic: obligations on private debts may not be regulated by the IMF, and therefore you (Russia) recognize our debt as private, Lagard will give us a new loan, and then we will pay you, honest word, all

The fact that this is a clumsy “divorce” was once again confirmed by the aforementioned Wolfgang Schäuble. After all, Schäuble is well aware of the fundamental differences between public debt and private debt. Well, this is well known, I must say, not only Schäuble ... As soon as Russia allows the transfer of Ukrainian debt to private status, fanfare will blow in Kiev and they will write out an indulgence to themselves that now it’s possible not to repay the debt - let Yanukovich say , repays - you are (Russia) recognized ...

But the disappointment for Ukraine is that Russia did not change its debt status, and therefore the new version of “restructuring in Ukrainian” loudly covered itself with a copper basin.

And after that, they began to realize in Kiev that if a gray-haired uncle did not come to the rescue from behind a puddle, then the IMF can really kick off the Ukrainian economy without allocating the next tranche to it. Mandrazh Ukrainian authorities added the German press, which is already openly writes that it is time to change the government of Yatsenyuk.

So, Deutsche Welle publishes a material that states that the resignation of Ukraine's Minister of Economic Development, Aivaras Abromavicius, and his statements about the corruption of government officials, are a signal to the need to "reformat the Ukrainian government." It's an amazing thing, but in the Western media, managing to confuse the geographical coordinates of Kiev and Ulan Bator, they know very well who Abromavicius is, and that this Abromavicius said ...

From the material DW:
The Ukrainian government is losing support in the Verkhovna Rada, which is necessary for making decisions. As the leader of the Petro Poroshenko Bloc faction Yuriy Lutsenko told 8 in February, three coalition factions are speaking for the change of the current Prime Minister of Ukraine Arseniy Yatsenyuk (talking about BPP, Batkivshchyna and the Samopomich party).

German media emphasize that only the Popular Front of Yatsenyuk himself is against the resignation, and that’s not all. But about what the "Popular Front" has to do with the Ukrainian people - today, perhaps, neither Yatsenyuk nor the people themselves will say ...

Realizing that the West is now able not only to nullify Yatsenyuk, declaring his work a failure, but also really squeezing money for regular loans, in Kiev they made an attempt, as one famous saying goes, “to change beds”. In Kiev, they said that they were ready to sign a memorandum with the IMF, but immediately tried to put forward conditions: not to touch the cabinet in its current form, and not to irritate Yatsenyuk with statements that he was everything ...

This is understandable, since Yatsenyuk was not at his current post with his own forces — a good overseas uncle sat him in an armchair, and therefore it was his uncle who was ready to give his protege a chance to continue plundering Ukraine. Why - looting? Because the Ukrainian memorandum with the IMF is a plunder in its pure form, as the government in this case undertakes to reduce social spending, turn up tariffs, raise the retirement age, make cuts in the public sector, work on reducing the share of free education. Officially, everything is done to save budget funds, to pay off IMF loans. But in fact, when the retirement age is raised, the social sphere will be cut down - will the money saved on the Ukrainian people go to payments through the IMF? No, of course - they will go into the business of the gray-haired uncle and in the pockets of his appointees and individual oligarchs who have seized upon power.

And is the IMF, in which, by the way, Russia is ready, to allocate funds to Ukraine for such needs?

Ctrl Enter
Noticed oshЫbku Highlight text and press. Ctrl + Enter
We are
Results of the week. “I respect you, and you respect me, we are dear people”Refugees from Syria. Will Russia accept immigrants from the Middle East?
100 comments
Information
Dear reader, to leave comments on the publication, you must to register.