Do we need to talk with NATO?

February 10 2016
60
When NATO announced in 2014 about the end of all contacts with Russia, the world became tense. No joke, Russia is becoming a real opponent of Europe. Yes, and we tried to explain to the hot-blooded military that the jokes could end very badly. Scare Russia is not worth it. For all the positive things, the Europeans did not understand at all that they were talking to another country. With a country that makes "politics" itself. A country that does not want to be in the wake of someone's politics. 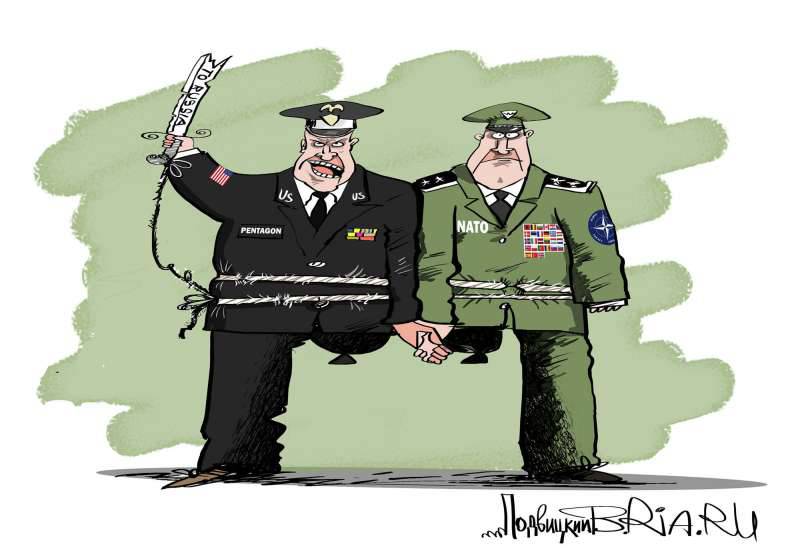 It is clear that Ukraine was just a reason. The main thing was the desire to return the end of 90-x. Return the world to a state where the United States and the EU lived quietly and richly by plundering the former Soviet bloc.

The well-functioning mechanism of relations in the form of the Russia-NATO Council, through the fault of the alliance, was first frozen, and then turned into a fiction. From that moment, more and more in the press, reports began to slip about the "interceptions" of Russian or NATO aircraft near the borders of states. Critical situations at sea began to arise. And ultimately, one of the member states of the block went into direct aggression against the Russian videoconferencing.

The world is getting closer and closer to the moment when one careless movement can become a catalyst for a big war. And this is best understood by the military.

"Now we are exploring the possibility of holding a meeting of the Russia-NATO Council ... We are not striving for confrontation with Russia and for a new cold war, we want to avoid a new cold war."

Washington supported the idea of ​​resuming the activities of the Council. The United States is well aware that Europeans do not want to fight. All NATO declarations are no more than an attempt to "call on the elder brother to intercede." And the power of the armed forces of the participating countries is not as great as foreign media are trying to convince us.

But the main instigator of the desire to again talk with the Russian military as an equal served as Syria. And of course, Erdogan’s completely ill-conceived policy.

The successes of the VKS in Syria have practically shown that it is possible to beat the bandits. Even the bloodless and tired of the 4 year of war, the Syrian army can cope with this. If a little help.

Now many politicians, including such a level as John Kerry or Ban Ki-moon, speak about the breakdown of the negotiations in Geneva due to the fault of Russia. Paradoxically, in some ways they are right. Russia really doesn’t make sense of the negotiations by its actions. The Syrian army is advancing. And it comes constantly. Not fast, but always. And in the preliminary agreements on negotiations there is a clause on the formation of a coalition government in composition proportional to the occupied territory and population.

If Russia's support continues, in two or three months the same people may be in the new government as now. The liberation of territories means the loss of ministerial portfolios for the opponents of Asad or the right to vote in general.

The President of Turkey, as I wrote above, is also trying with might and main to expose NATO. Realizing that Europe today is completely unable to cope with the flow of refugees, Erdogan is directly blackmailing the EU. More recently, the Europeans have agreed on 3-billion compensation for refugees. We give you the money, and you keep the refugees at home. So what?

Appetites are growing. Turkey is demanding double the compensation. And these demands, if not met, are already threatening to break some political career of some European politicians. In particular, Merkel.

According to the treaty, NATO member countries are obliged to help other members in the event of an obvious confrontation with any state. The famous NATO principle of collective self-defense. And now, if you look at the bellicose statements of Erdogan and the movement of his troops along the border, it becomes clear that the collision of the Russian AF with the Turkish Air Force or the AF and ground forces is very likely.

In this regard, yesterday’s statement by the Secretary General of the Alliance on non-intervention by NATO in the hostilities in Syria is very significant. NATO, according to Stoltenberg, under no circumstances interferes in the conflict. And these words were directed not so much to Assad or Putin, as to Erdogan.

But at the same time, we hear constant statements at different sites of the same Stoltenberg about the war crimes of Russia. About the bombing of hospitals, schools, hospitals. Moreover, the general secretary, like John Kerry, does not particularly care about evidence. They are not needed. Suffice it to say.

How do we treat voiced statements? Should I believe the words of those who have more than once brazenly lied?

Be that as it may, but the situation today is such that we must believe. Trust, but verify. The same statement about the non-interference of NATO troops in the conflict gives a chance to Turkey’s refusal to direct aggression in Syria. It is doubtful that the Turkish politicians and the military did not calculate the consequences. As Russia can answer, the Turks are already feeling fully in their pockets. And what can happen with the army, showed missile strikes on positions of ISIS.

And the situation in Europe is such that we need a dialogue. Even the fact that the United States dramatically increased the military budget for its military units in Europe, dictates this need. Not to mention the emergence of new divisions near our borders. Yes, and the US missile defense has not been canceled.

The resumption of the work of the Russia-NATO Council is necessary for everyone. And this is finally understood by both Americans and Europeans. It remains to hope that the Council will start working in the coming days or weeks. The world needs peace.

Ctrl Enter
Noticed oshЫbku Highlight text and press. Ctrl + Enter
We are
Situational analysis of the death of the MH17 flight (Malaysian Boeing 777), made on the basis of engineering analysis from 15.08.2014Results of the week. “He who does not regret the collapse of the Soviet Union, has no heart; who wants to recreate it in its previous form, he has no head "
60 comments
Information
Dear reader, to leave comments on the publication, you must to register.