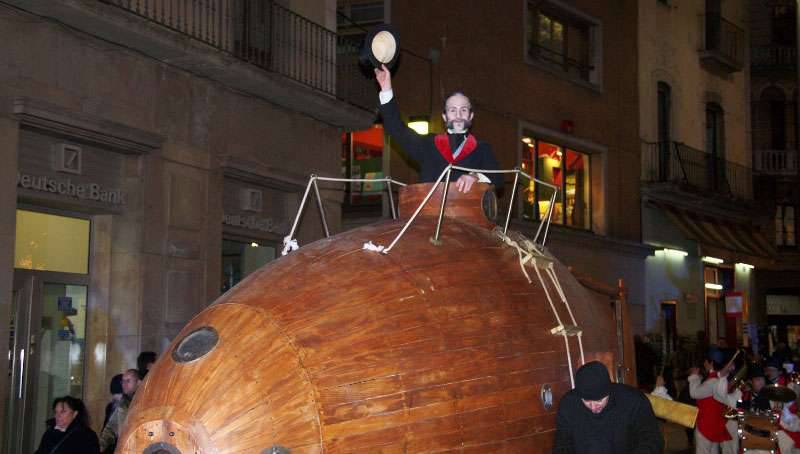 155 years ago, 7 February 1861, Barcelona hosted the first public demonstration with the immersion of the first Spanish submarine "Iktino", developed by the inventor Narcis Monturiol. A small triple underwater vehicle with a displacement of 10 tons and a length of seven meters resembled a fish and was made of oak and olive wood. He was set in motion by the muscular power of two sailors who rotated the screw. The stock of compressed air and the carbon dioxide absorption system were absent, so the time to stay safely under water was short.

The boat was not intended for practical use and was a purely experimental product, as well as a technology demonstrator. At first glance, it did not contain anything avant-garde, such hand-operated submarines had been built before. However, the new art of Monturiol was that he made his unit two-body. Between the lightweight outer casing and durable inner tank located ballast water. This scheme was used for the first time, and after a few decades it became classical. The solid hull was an oak cylinder with 15 centimeters thick walls and only one meter in diameter, so the crew probably didn’t feel very comfortable in it.

"Iktino" was made with high quality and withstand immersion to a depth of 20 meters, which for those times was a record. The inventor believed that he could fall to 50 meters, but did not dare to check it in practice. However, the speed of the device, like the majority of "manual" submarines, was very low: only two nodes on the surface and even less - under water. In the 1862 year, after about fifty successful test dives, the Iktino, which stood at the pier, was crushed by a steamer that flew over it. But Monturiol was not very sorry about this, since he already had a project for a much larger and more complete engine submarine.
On the screen saver - an artist depicting Monturiol in a mock "Iktino" at a parade in honor of the culture of Catalonia. 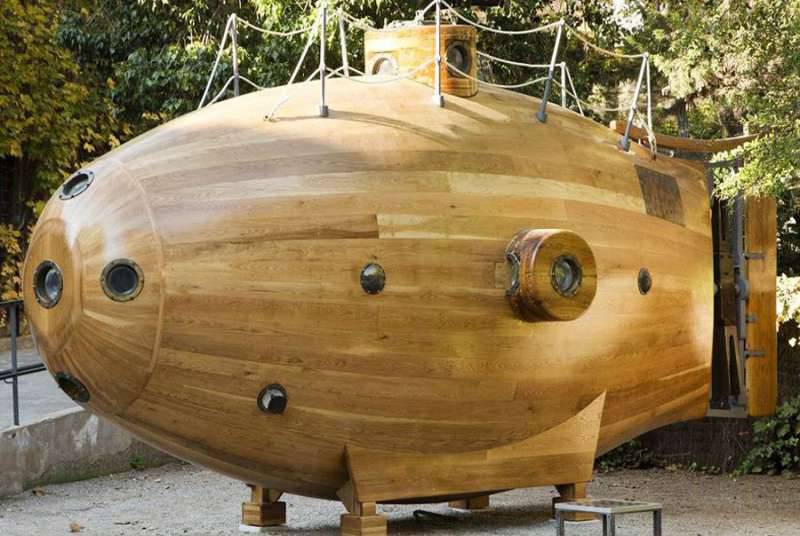 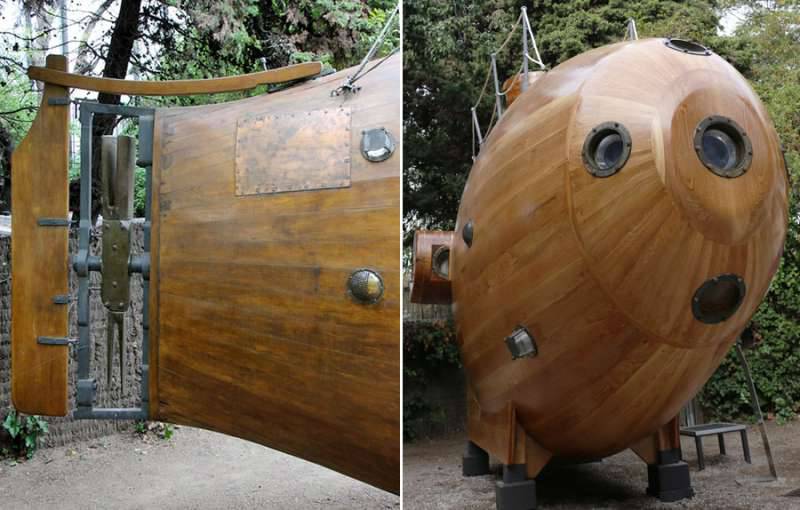 Full-size mock "Iktino", exhibited in Barcelona. Attention is drawn to the original "twin" screw. Obviously, Monturiol believed that this design is more efficient.

The second submarine of Narsis Monturiol was built by crowdfunding. The inventor announced a nationwide subscription, and he managed to so much interest his compatriots with the idea of ​​underwater fleetthat they collected a very decent amount of 300 thousand pesetas. For comparison, with this money it was possible to build five sailing frigates or two steam frigates. And Monturiol built on them the world's first submarine with a heat engine, called "Iktineo-II." At the same time, the engine he invented was absolutely unique.

It was a combined steam power plant with six cylinders and two boilers. When driving on the surface, it acted like a regular steam engine with a coal furnace that heated one boiler that worked for three cylinders. Before immersion, the firebox was extinguished, and under water, the second boiler was turned on, also working on three cylinders, but heated by the exothermic reaction of the interaction of zinc powder with manganese dioxide and potassium chlorate. During this reaction, oxygen was released, refreshing the atmosphere inside the enclosure.

The Iktinio II had a displacement of 46 tons, a length of 17 meters, and its robust body could accommodate up to 20 people. The power of the coal steam engine was 6 hp, and the "chemical" - just 2 hp Of course, for the 46-ton vessel this was clearly not enough. Initially, Monturiol intended to build a metal submarine, but the amount collected was not enough. Therefore, the Iktinio II, like its predecessor, turned out to be wooden, with only metal parts and assemblies. And he was also purely experimental, without any adaptations for military or commercial use.

The submarine was launched in Barcelona in the spring of 1865 of the year, and on May 22 she successfully dived to 30 meters, thus breaking the Iktinio-I record. However, the engine did not turn on. Then in the tests for some reason there was a long break. Perhaps the inventor was engaged in fine-tuning the power plant and making some changes in the design. In the 1867 year, the Iktino II already walked on the surface on a steam drive, reaching the maximum speed of the 22 node on October 4,5. In the same autumn, attempts were made to use a chemical steam generator for an underwater course, but nothing is known about their results. We can only assume that they were not very successful.

In the meantime, the money from Monturiol was over, and the search for new sponsors and attempts to dislodge government funding were unsuccessful. Moreover, he, as a shipowner, was demanded to pay the corresponding tax for three years. And the inventor already had debts almost in 100 thousand pesetas. He had no choice but to declare himself bankrupt. The submarine was confiscated in repayment of debt, and the creditors, not knowing what to do with it, sent the Yktinine II for scrap in 1868. So ended the first in Spain experiments on the creation of submarines. 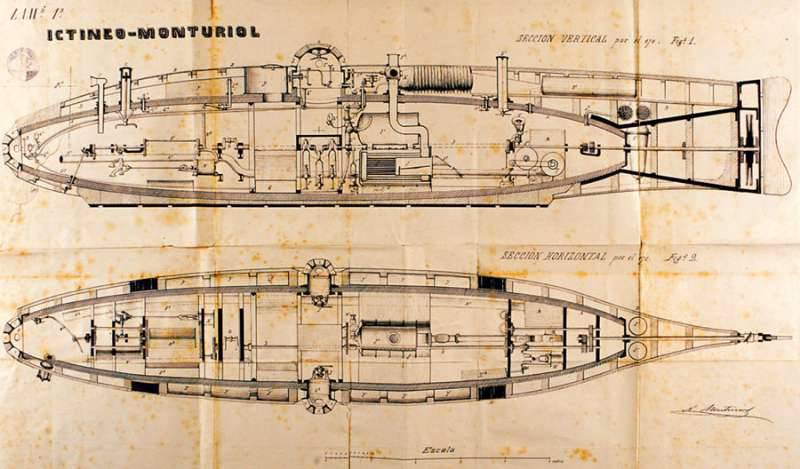 Drawings "Iktino II", where you can see its structure. The two-hull boat layout is clearly visible. 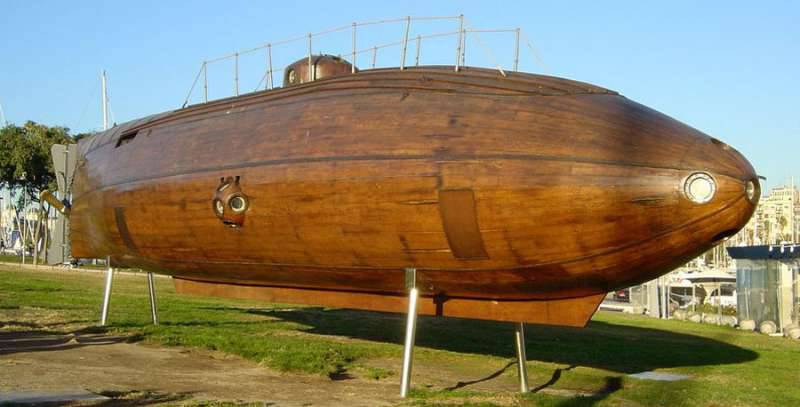 Full-size mock "Iktino II", exhibited in the seaport of Barcelona. 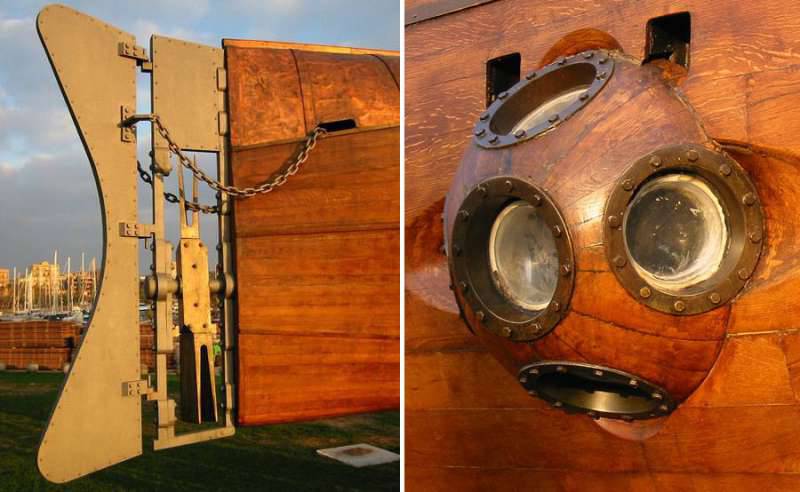 Details of the design.