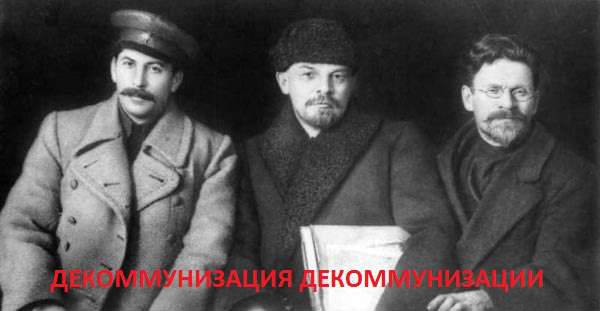 Oleksiy Rosovetsky, one of the Ukrainian writers, better known as an “angry Kiev resident,” once remarked: “Mania to rename the streets is a long-time illness of the Kiev authorities with any structure.”

I would add that not only streets, but also cities, villages, monuments ... In general, all my historical memory. True, this disease is very young by historical standards. I, as a normal person, are deeply disgusted by all these grimaces of “decommunization” and “lustration”. And I, not being a great admirer of Lenin, have an extremely negative attitude to the Ukrainian “Leninist fall” and I understand well the feelings of the Communists. Although, for the sake of justice, it must be said that it was they who laid the practice of demolishing monuments and renaming streets and cities in order to destroy the historical memory of the people. But we will not gloat over this matter, just look at the roots of what is happening.

Ukrainian “de-communisators” clearly lack historical figures of Ukrainian origin in order to replace the names with new ones and erect new monuments in such a huge state. We have to find completely unknown individuals and attribute them to the new Ukrainian nationality.

Following the Svidomo logic, which is extremely difficult, it is possible to predict the use of such a planetary personality as Leo Trotsky.

Especially since the historical precedent has long been established. In May, a “sugar worker, non-party worker” sent 1926 to the city council, the All-Ukrainian CEC and the Central Committee of the party the following document:

“I am proposing to rename the city of Kiev to the mountains. Trotsky. Horus Trotsky will no longer be reminded of the mythical Kie. Horus Trotsky's name will tell the working people about the great revolutionary work that Comrade did. Trotsky in Ukraine during the most brutal class struggle on behalf of the Central Committee of the RCP (B.) ”. 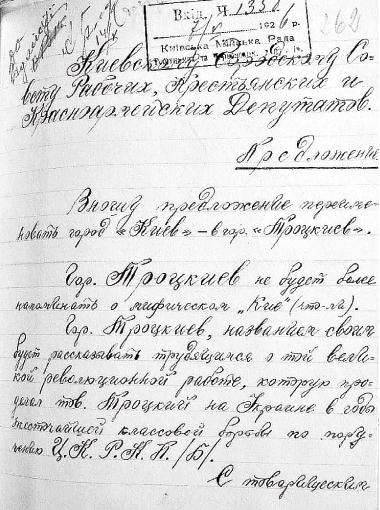 The initiative fits perfectly into the trend of those years, especially since Trotsky Street (later Artema Street) and Trotsky Garden (Kreshchaty Park) were already in Kiev.

Yes, and the first "lustration", however, very bloody, were started precisely after the occupation of Kiev by units of the "Red Army of Trotsky." Then the “lustration commission” was created, which fished out and brutally executed all the participants in the so-called “Beilis case”. Of course, this “lustration” was more like banal revenge, but then who could ask from the winners?

For renaming as part of the “de-communization” of the city of Kiev, Trotsky fits perfectly.

He was born in 1879 year in the village of Yanovka, Kherson region, repeatedly visited Kiev. He published the first issues of the newspaper Pravda in Lviv, was a correspondent in Europe for the Kievskaya Mysl magazine. Even the famous “Trotsky armored train” “Pre-Revolutionary Military Council”, on which he traveled, accompanied by guards in uniform of chic crimson leather, was also built in Nikolayevshchina and sheathed with armor guns from the Corfu squadron. 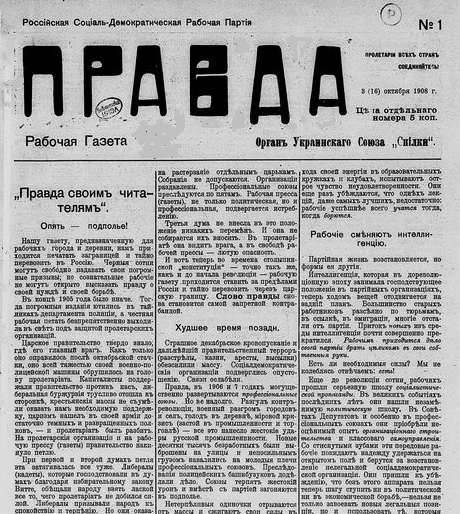 But, most importantly, right now in Ukraine such a regime has been established that most corresponds to Trotsky's ideology.

Why, you ask, after all, Trotsky is a Communist. And no. Leon Trotsky was a member of the All-Russian Communist Party for a very short time, until 1927, and was excluded from it in disgrace.

There is a famous expression attributed to Leon Trotsky:

“... We must turn Russia into a desert inhabited by white negroes, to whom we will give such a tyranny that we never dreamed of the most terrible despots of the East. The only difference is that this tyranny will not be on the right, but on the left, and not white, but red, for we will shed such blood flows before which all human losses of capitalist wars will tremble and turn pale. ”

(From the speech of L. Trotsky to the fighters of the Bogulma division on the Eastern Front. The newspaper “Working Thought” from July 20 of 1919).

Do not these goals are planned by the current Kiev rulers, are they not such slogans and methods they use?

The question of who and what forces have now won in Ukraine and are in power is very interesting. There is no doubt one thing: the ball is ruled by supporters of neoliberalism, who very bloodily implement their concept of world order in the world.

Alexander Plashchinsky writes: “The conceptual basis of the“ liberal ”scenario of the world order consists of the ideas of a“ new world ”,“ world (permanent) revolution ”,“ world state (federation) ”,“ world government ”, and“ global governance ”. The implementation of this scenario in the 20 century was carried out within the framework of the organization and support of various socio-political and social movements: the international struggle for peace movement (“Peace Congresses” - from 1843 until the beginning of World War II); world revolution movement; movement for world government; peace movement through education, etc.

The process of establishing a new world order is permanent war. This process, as emphasized, reflects the “big picture” of history and includes the First World War, the Second World War, the Cold War, the “War on Terrorism,” as well as modern cyber warfare. This approach largely explains the evolution of the United States from an isolated state at the end of the 18 century in the western hemisphere to the only superpower at the end of the 20 century.

In the 20 century, three attempts were made to establish a new world order. First try followed on the background of the First World War. The means to achieve world hegemony was world revolution movement. In Russia, this movement was coordinated by the Trotsky bloc in the Bolshevik Party. US financiers provided extensive support for Trotsky and his supporters, who implemented the concept of "permanent revolution" and implemented a policy of "red terror", in fact, genocide of the n people.

Such a policy is focused mainly on undermining the potential of Russia as a world center of power. Under the slogan of organizing a world revolution, it was planned to subjugate Russia "External management". The movement of the Trotskyists was stopped by Stalin, who managed to eliminate the so-called. "Trotsky-Zinoviev bloc." For this, the Soviet leader used symmetrical Trotskyist methods of political repression. (http://ruskline.ru/special_opinion/2015/11/zavershenie_epohi_mira_poamerikanski_i_nachalo_ery_obedinennoj_evrazii/).

To verify the correctness of these words, it suffices to read the records of the interrogation of Trotsky's creature, the dictator of post-revolutionary Ukraine H. Rakovsky, the so-called “Red Symphony” (http://samlib.ru/r/rjurikow_i_s/httpzarubezhomcomredsymphonyhtm.shtml).

There it is very frankly told who, how and for what purpose was doing the “revolution” in Russia.

Thus, now in Ukraine it is precisely the forces that Leo Trotsky represented at the beginning of the 20 of the 20th century, and that very ideology of “Trotskyism” that Stalin did so unsuccessfully in Russia for so long and unsuccessfully to eradicate. And, following Svidomo logic, renaming Kiev to Trotsky is not such a crazy idea.

Ukraine is a country of paradoxes ...