Moscow signal to "partners": Syrian Kurds are opening a public diplomatic mission in the Russian capital

February 10 2016
50
The Kurds are the most numerous people in the world, not having their own state. According to the most modest estimates, about 40 million Kurds live in different countries of the world. The largest number of representatives of the Kurdish ethnic group inhabit Turkey (about 17 million), Iran (about 7,5 million), Iraq (about 7 million) and Syria (about 2,5 million). Large Kurdish diasporas are also formed in a number of European countries. The leaders among the EU countries are Germany, where the number of Kurds is close to 800 thousand.


In Russia there are regions in which the number of Kurds has significantly increased lately. Among such regions are Moscow, Moscow and Tambov regions, Krasnodar territory. Russian Kurds (and there are about 70 thousands of people) are mainly from Central Asia (former Soviet republics), primarily from Kyrgyzstan.

Why all this information about the Kurds? And the fact that in the Russian capital opens, in fact, a unique social and diplomatic mission of the Kurdish people. We are talking about the representation of the Syrian Kurds, who are fighting with a number of terrorist groups in the north and north-east of Syria. At the same time, the Kurdish population of Syria in the neighboring (with Syria) Turkey, the local president, was openly announced by representatives of the “groups of international terrorism”, which indicates obvious ethnic discrimination allowed by the head of state in which every 5 citizen is Kurd by nationality.

It is impossible to call the Syrian Kurdistan's public diplomatic mission in Moscow a full-fledged embassy, ​​if only because there is no such independent state on the world map as Syrian Kurdistan. And the Syrian Kurds themselves, as they say, do not insist on such a state recognizing the world community. We are talking about public diplomacy, which in a number of cases can play a very serious role in relations between the peoples of different states.

Information Agency TASS cites the statement of the head of the Council of Federal National-Cultural Autonomy of Kurds Farhat Patiyev:
This will be the representation of a non-governmental organization that does not have the functions of an embassy. The mission will be called upon to defend the interests of the Kurds, who live both in Russia and in Syria, many of whom are not citizens of the Syrian Arab Republic. 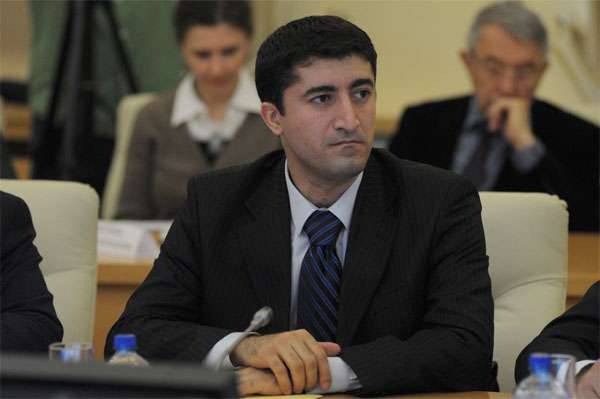 It should be noted that Farhat Patiyev is a member of the Council on Interethnic Issues under the President of the Russian Federation. According to Farhat Patiev, in modern conditions it is extremely important to follow the path of consolidating efforts to combat international terrorism, and Russia, as a country making a great contribution to such struggle and being a model of the state of peaceful coexistence of various ethnic groups, can take the path of strengthening ties with friendly Kurdish people facing a terrorist threat.

If we talk about the Syrian Kurds' Moscow public diplomatic mission, then it is unique because it is the only such mission that will currently act as a separate organization outside the countries of the Middle East. Such a structure is still present only in Iraq, but there are a hundred times more Kurds in Iraq than in the Russian Federation.

So, why in Moscow, and why now? The first argument that suggests itself is the reciprocal political course of the Russian leadership of official Ankara. As is known, the official authorities of Turkey on their territory readily accept the so-called leaders of the so-called Crimean Tatar “Mejlis” - Messrs. Dzhemilev and Chubarov, who were sent far and long by most of the Crimean Tatars living directly in Crimea. Official Ankara not only welcomes figures embedding into the system of Ukrainian Maidan’s authorities, who come out with openly extremist and even terrorist initiatives against Russia and Crimeans, but also, judging by the statements of Dzhemilev, Chubarov, Islyamov, actively support them in any destructive to the Russian state of activity. Whether it was the undermining of power transmission towers in the Kherson region, where militants of the Turkish terrorist group Gray Wolves “accidentally” looked, or statements about assistance in the implementation of the “sea blockade” of the Crimean peninsula.

If so, then why should Moscow not accept people who, with the mere fact of their existence, cause Erdogan to have violent emotions with demands from the US to answer the question, who are they with, with him (with Erdogan) or with the Kurds ... And if the USA for definite reasons, the Turkish president did not give an unequivocal answer, then Russia indicated its position in relation to the Turkish leader not by word but by deed. What is this position? It is that Russia perceives Erdogan as an accomplice of terrorists and a criminal who not only gives orders to destroy the aircraft that performed the counterterrorism mission in Syria, but also violates the rights of millions of Kurds in their country and tries to dictate conditions to the Kurds living in Syrian territory. Moscow is ready to accept the mission of people who oppose themselves to the dictatorship of Erdogan, who has recently passed all imaginable and inconceivable boundaries. Receiving Syrian Kurds, it’s also Moscow’s message to Turkish Kurds ...

But the creation of the public-diplomatic mission of the Syrian Kurds is not only a kind of demarche in relation to Erdogan. First of all, it is still a step towards listening, hearing and uniting all those Syrian forces who are really ready to preserve the united Syria, which stand for Syria from a patriotic stand, despite its attitude to Bashar Asad. And this is a “big hello” to “partners” from Riyadh, who believe that only they are “allowed by the Almighty” to decide from whom it is necessary to shape the future political landscape of Syria. Taking into account the fact that neither Riyadh, nor Ankara, nor the same Washington (given its experience in “dragging down” certain states) clearly do not set itself the goal of preserving Syria as a single and politically strong state in the Middle East region, the Russian initiative to consolidate The real patriotic forces of Syria benefit both directly these forces and the current official Damascus, which needs strong support from the Syrian Kurds as well.

Ctrl Enter
Noticed oshЫbku Highlight text and press. Ctrl + Enter
We are
Rozhava - the land of the Soviets. How do Syrian Kurds fight and build a new world?Turkey against the Kurds. Is there a new phase of conflict ahead?
50 comments
Information
Dear reader, to leave comments on the publication, you must to register.