Our proud “Varyag” does not surrender to the enemy. 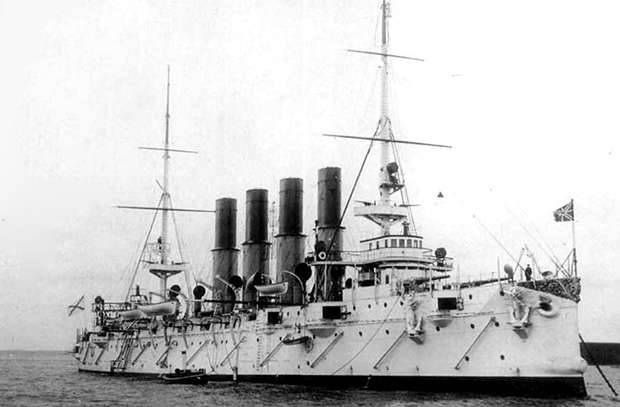 By the beginning of the Russo-Japanese War, the Varyag armored cruiser and the Koreyan gunboat were stationed in the Korean port of Chemulpo (now the sea suburb of Seoul, the capital of South Korea). "Inpatient" then called the military ships, who stood in foreign harbors to support their diplomatic missions.

In Korea, for a long time, there was still a political struggle between Russia and Japan for influence. The Korean king, fearing the Japanese, was hiding in the house of the Russian ambassador. Under these conditions, the cruiser Varyag and the Korean Koreludka guaranteed the support of our embassy in the event of any provocations. At that time it was a common practice: in the port of Chemulpo, warships — “hospitals” of England, France, the USA and Italy — stood in front of our ships and defended their embassies.

6 February 1904, Japan severed diplomatic relations with Russia. Two days later, the Koreon gunboat, which had left Chemulpo to deliver a report from the embassy to Port Arthur, was attacked by Japanese destroyers. They fired two torpedoes at her, but missed. "Korean" returned to the neutral port with the news of the approach of the enemy squadron. Russian ships began to prepare for battle with superior enemy forces.

The captain of "Varyag" Vsevolod Fyodorovich Rudnev decided to fight his way through to Port Arthur, and in case of failure to blow up the ships. The captain appealed to the team: “Of course, we are going on a breakthrough and enter into battle with the squadron, no matter how strong it may be. There can be no questions about surrender - we will not surrender the cruiser and ourselves and will fight to the last opportunity and to the last drop of blood. Do everyone their duties accurately, calmly, without haste. "

9 February 1904 of the year in 11 hours of the morning Russian ships left the port to meet the enemy. At noon on the Varyag the alarm was sounded and the battle flag was raised.

At 12 hours 20 minutes, the Japanese opened fire on our ships. After 2 minutes, Varyag and Koreets returned fire. In total, our ships had 21 guns in caliber from 75 mm against Japanese 90 similar calibers. 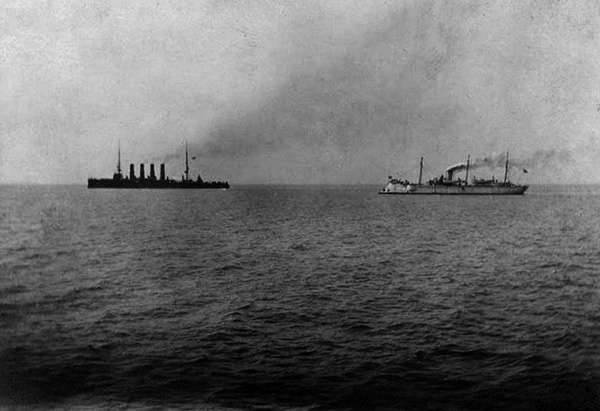 "Varyag" and "Korean" go into battle, 9 February 1904. Photo: wikipedia.org
Excellence in forces immediately affected the course of the battle. The Japanese literally bombarded the Varyag with heavy shells. After 18 minutes after the discovery of fire, the 152-millimeter projectile from the armored cruiser “Asama”, hitting the right wing of the front bridge “Varyag”, destroyed the front-range finder and caused a fire. The loss of a range finder dramatically reduced the ability of the Russian cruiser to conduct aimed fire.

As it turned out after the battle, fires caused by the hits of enemy shells damaged the sixth part of the ship. From the 570 man of the Varyag team, the 1 officer and the 22 sailor were killed during the battle. After the battle, another 10 man died from his wounds within a few days. 27 people were seriously injured, "less seriously injured" - the commander of the cruiser Rudnev himself, two officers and 55 sailors. Over a hundred more people were slightly injured by small fragments.

Since the Japanese were significantly superior to the Russian forces during the battle, their losses and damages were much less. In the course of the battle with the Varyag, a hit and fire was observed on the Asama cruiser, the flagship of the Japanese squadron. Both during the war and after the Japanese, they stubbornly denied any casualties in the battle of Chemulpo, although after the return of their ships to the base in Sasebo, the dead bodies were demolished from 30.

The damaged “Varyag” and the “Korean” cannon ship retreated to the port of Chemulpo. Here, Captain Rudnev, who was wounded in the head and concussion during the battle, but did not leave his post, decided to destroy the ships so that they would not reach the enemy.

In 16 hours 5 minutes 9 February 1904, the gunboat "Koreyets" was blown up by a team and sank. On the Varyag, after the evacuation of the wounded and the crew, the Kingston was opened: in the 18 hours of the 10 minutes, while still on fire, the cruiser overturned to the port side and went to the bottom.

The surviving officers and sailors from the Varyag and the Korey returned to Russia through neutral countries. The remains of the Russian sailors killed in that battle were transferred to Vladivostok in 1911 and buried in a mass grave at the city’s Sea Cemetery.

The battle of "Varyag" with the superior forces of the Japanese squadron was later differently evaluated by military experts, more than once speculative theories were advanced that the enemy could be dealt more damage. But public opinion, not only in Russia, but also in European countries, immediately praised the feat of the Russian sailors, who bravely moved into a hopeless battle.

Thus, the Austrian poet Rudolf Greyntz, previously distant from Russia, and even more from the Far East, soon after he learned about the heroic battle of the Russian cruiser, under the impression of the courage of the Varyag team, wrote a song that immediately became, as they would say today, hit "and" hit ":

Already in April, 1904, Der Warjag, was translated into Russian, and today these words are known to almost everyone in our country:

Up, oh comrades, everything is in places!
The last parade is coming!
Our proud Varyag is not surrendering to the enemy,
No one wants mercy!

Ctrl Enter
Noticed oshЫbku Highlight text and press. Ctrl + Enter
We are
Russo-Japanese War 1904-1905's. State of the Russian fleet. Bad luck and missed opportunitiesThe cruiser "Varyag". After the ball…
124 comments
Information
Dear reader, to leave comments on the publication, you must to register.