February 16 2016
52
Of course, we all know well that there is such an eastern calendar, and according to it, 2014 was the year of the “horse year”. Now we have “the year of the monkey”, but for the role that the monkey played in stories humanity, it is not even close to the horse was not, although in many ways similar to us. Well, we commemorate the horse very often, although it does not play a big role in our modern life. There is also the expression “horse in a coat,” which is true, because it has long been customary to dress horses in blankets to protect against the cold. But when did the first blankets appear and what were they meant for? 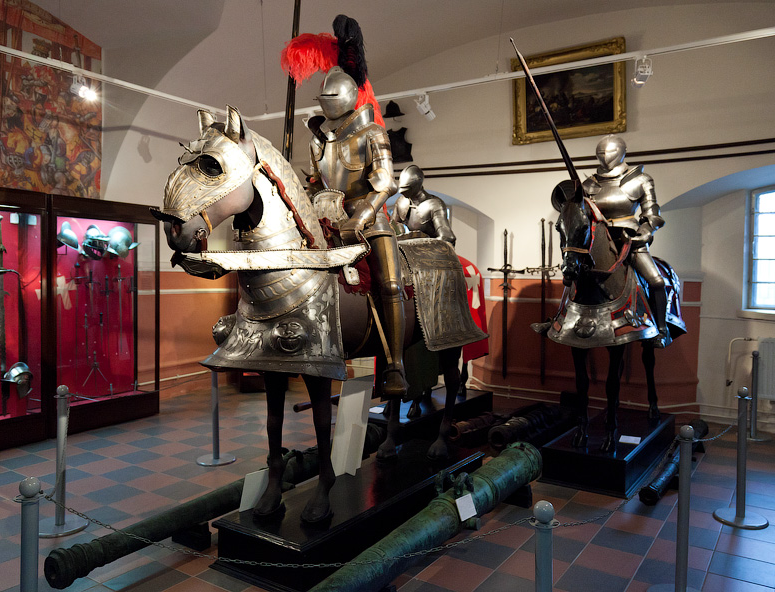 Knights on horseback and all "chained in battens." Artillery Museum in St. Petersburg.

Interestingly, there are no ancient images showing that the ancient Greeks or Romans covered their horses with cloth blankets. But there are ancient Egyptian monuments (paintings and bas-reliefs), on which horses, harnessed in chariots, are covered with a light dorsal blanket. It is unlikely that they had any other function, except ... identification. Like, on such a chariot the king rides! 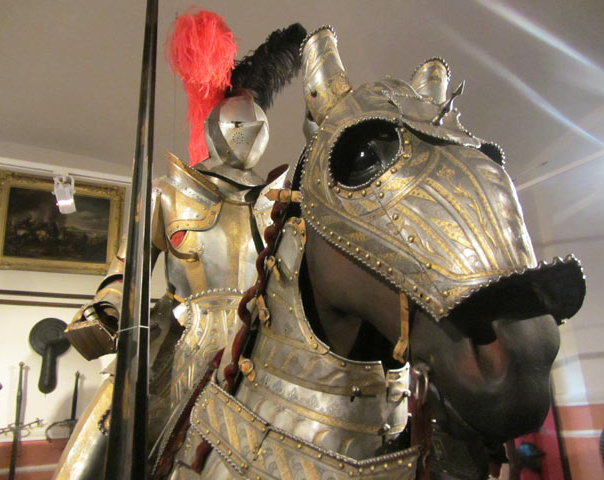 Ibid. The same knights and ... how wonderful their armor!

Sarmatians - rivals of the Scythians regarding everything related to military affairs, starting with long swords and heavy spears, and ending with ... horse armor, were probably the first to realize that, to protect their horses from arrows, they should be dressed in armor of metal scales. However, the Greek historian Xenophon wrote about the Persian horsemen, with whom he personally had to fight, as warriors wearing armor and having “special armor” covering their chest and head of their horses. In his "Kiroropedii" he wrote that he saw soldiers in the same purple clothes (here it is - the oldest uniform!), In bronze armor and helmets with white plumes ... Their armament consisted of a short sword and a pair of darts. Horses also had their bronze breastplates and caps. 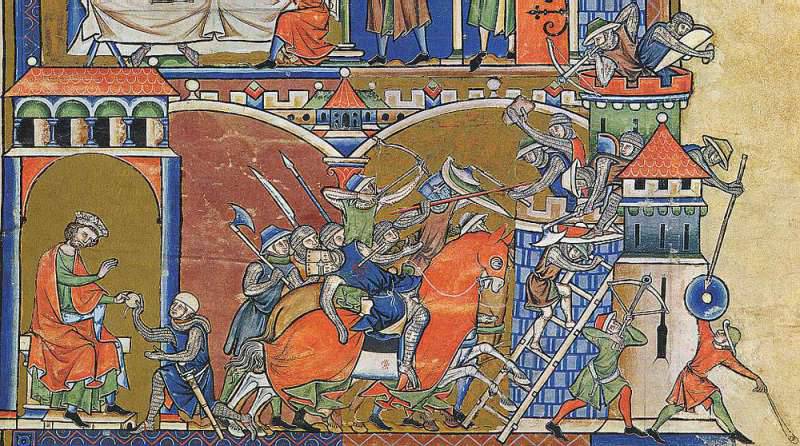 Thumbnail from the Bible of Macieus. Middle of the XIIIth century Pierpont Morgan Library and Museum, New York

When the Romans encountered the Sarmatians, they ... also adopted their weapons (just in case!), But they still didn’t become popular horse armor. Although it is known in 175 AD Emperor Marcus Aurelius sent a whole "regiment" of Sarmatian cataphracts to Britain. There is also an image of such a rider from Dur-Europos in Syria, and his horse blanket made from metal scales was also found there. But what is interesting. Although the Romans suffered several defeats from the riders seated on "armored horses," they did not respect them very much, as their name says - klibanarii, derived from the Latin word klibanus - a special iron bread oven like the stove we know stove. That is, for them it was the "warrior-stove"!

The contemptible Gyug de Bov flees from the battlefield of Buvin, 1214, and gets an arrow at the croup of the horse! "Big Chronicle" by Matthew Paris, approx. 1250 Parker Library, Body of Christ College, Cambridge.

Well, and then came a period of universal decline and social confusion, and in order to dress horses, people simply did not have the material capabilities - as they say, they survived according to the principle: “not to be fat, I wish I could live!”

“Romance of Alexander”, pp. 43, 1338 - 1344 Bodleian Library, Oxford University. Note that the horseman’s horsecloth is made up of two halves.

There are no blankets and the famous "embroidery from Bayeux." That is, riders in chain mail and with drop-shaped shields on it, but the horses are all “naked” and, therefore, they did not participate in the battle of Hastings 1066 of the year.

Well, judging by the fact that in a year 1170 was written by a certain knight Anauta Guilhem de Marchand, then the knight's horsecloth, the saddle, his shield, and a long pennant on a spear should have served the knight instead of a “passport”! Of course, woven blankets, without any doubt, should have protected the horse from the weather, but they had no special protective functions. That is, a hundred years have passed and ... blankets appeared! But the goal was peculiar: to show your coat of arms by all possible means. 1349's “Psalter of Latrell” of the Year shows us an English knight, Jeffrey Latrell, who has absolutely all his gear with a design of his coat of arms. And the coat of arms is depicted on the dresses of his wife and daughter, who give him a helmet and a shield. And you can calculate that its emblem is repeated 17 times! That is, it means that it was so. And it did not bother anyone. 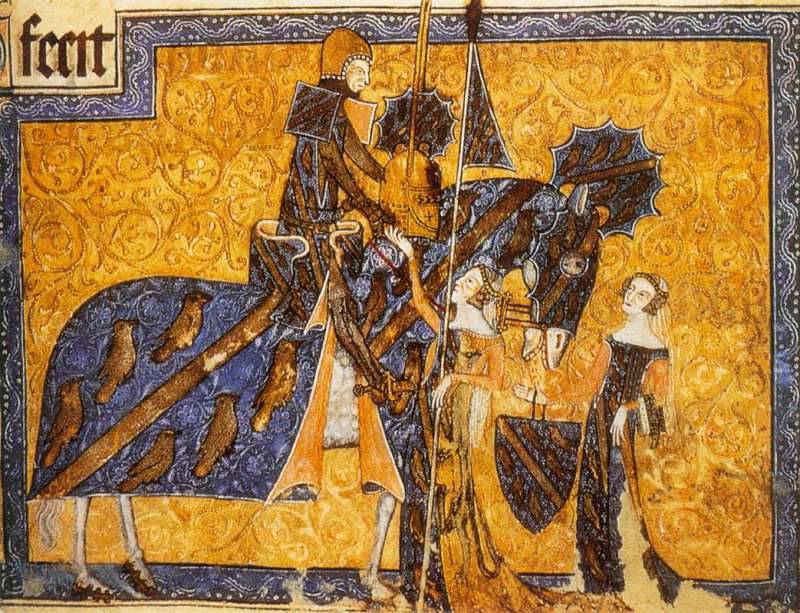 As for the armor, from the end of the XII century. in Europe, a head was put on a horse's head: first leather (known since Rome), and then metal (also known by the Romans and, first of all, to participants of the hippika gymnasium competitions), and very often decorated him just as and the helmet of the rider himself. In the French document 1302, the presence of armor, called bard and caparison, is noted, which are known to be quilted and also padded, and even then horse armor made of chain mail was already known. The headgear could be chain mail, and leather, and, interestingly, the leather headgear could even be gold! It is possible that both quilted blankets and printed ones at that time were no longer considered an independent means of protection, and they could be used as a lining for chain mail “fabric”. Well, the earliest example of horse plate armor dates back to 1338, although it is not clear what kind of armor it was. 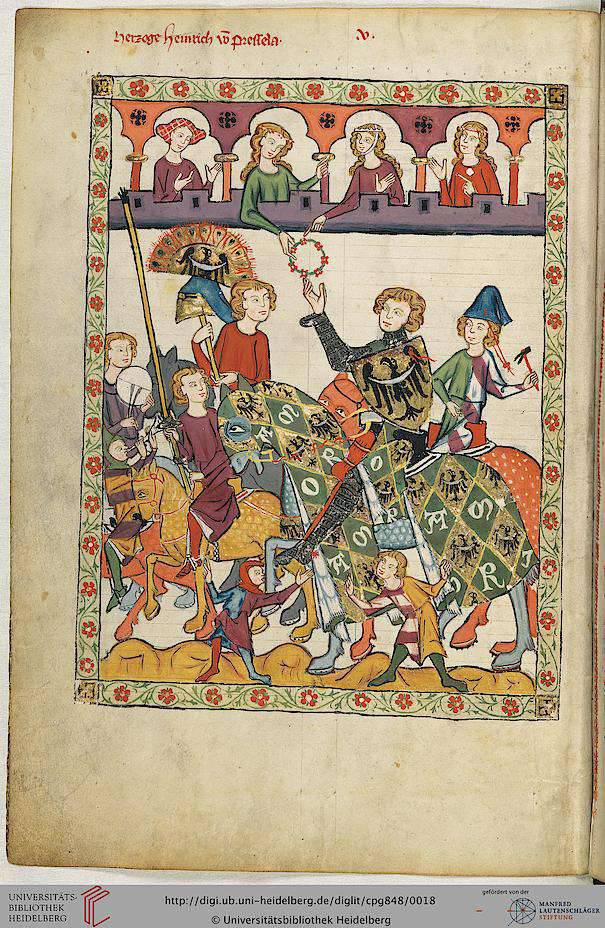 In the East, horses also had their own "coat." And even earlier than in Europe. In Iran, already in 620, horses carried armor of chain mail, while Chinese riders on horseback had quilted protective shells even before the Hun invasion of Europe. The shells were also on horseback from the heavily armed horsemen of the Byzantine cavalry, and their sworn opponents of the Arabs. Moreover, they are mentioned among the Arabs during the life of the Prophet Muhammad, who borrowed a lot from ... the Persians! 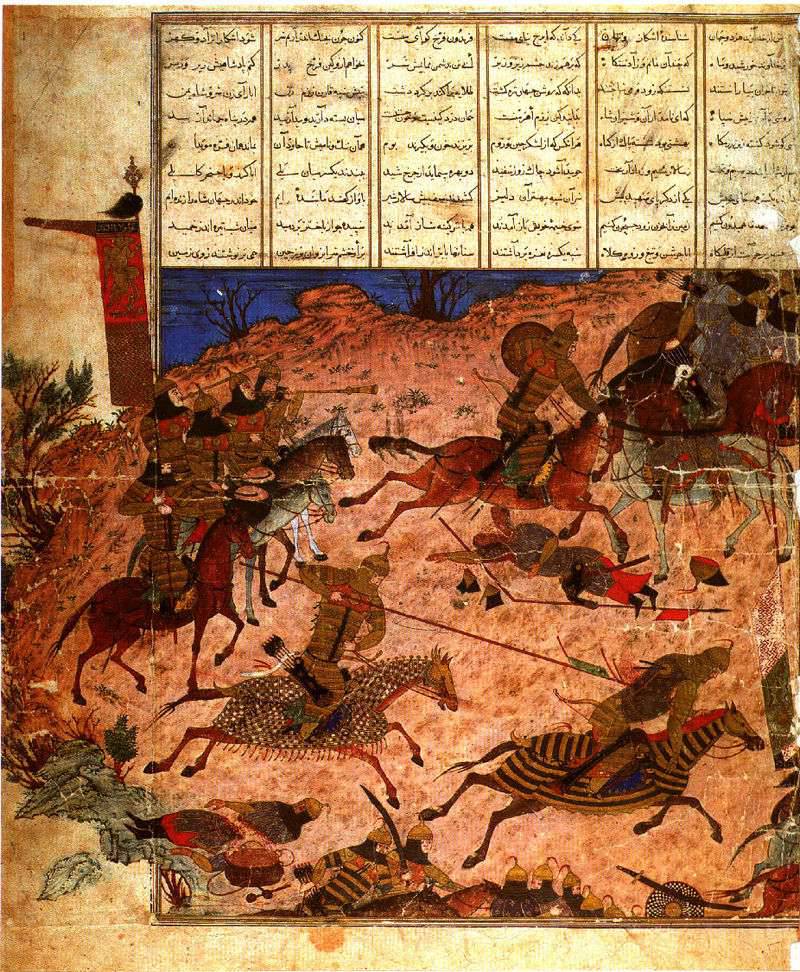 Many medieval authors describe the five-piece horse armor of Batu Khan's warriors. As for the knights themselves, it was under the hot sun of Palestine that they appreciated not only the oriental sherbet, massage and the famous Turkish bath, but also wide loose clothes covering the top of the armor, and horse blankets protecting horses from heat, and from annoying animal insects.

Interestingly, in Persia, we will not see a miniature horse armor until 1340, although it is known that it was there even in 920. But then after her images are found very often, which allows us to say that at the beginning of the 15th century. About 50 percent riders had similar armor. The Persians had different types of armor, but they did not use chainmail, as in India. Their very design was traditional: our cadet, breastplate, two side plates and a nakrupnik. Only the nostrils, the ears, and, of course, the legs remained open. Known armor of one color, in which manifested the desire for uniformity, which can be seen as a kind of military uniform, along with the red cloaks of the Spartans and tunics Roman centurions. Iranians also used “quilted silk” blankets, which are in the 1420 illustrations of the year. However, the actual armor, which in museums are classified as “Persian” or “Turkish”, cannot be identified, since they very often changed their owners. They were bought, they were sold, they were part of military production. Therefore, the whole set, in whole or in parts of it, could easily make long “tours” to the countries of the Muslim East! Well, the number of riders on the "armor horses" was somewhere in the proportion of one such rider on 50 - 60 riders "unarmed", that is, not very high.

In India, horse armor was very popular until the 17th century. In any case, Athanasius Nikitin saw cavalry there, "fully dressed in armor," while he did not lose sight of such detail as horse masks, trimmed with silver, and also wrote that "most of them are gilded." Horse blankets, which he saw, were made of colored silk, velvet, satin and ... "fabrics from Damascus." 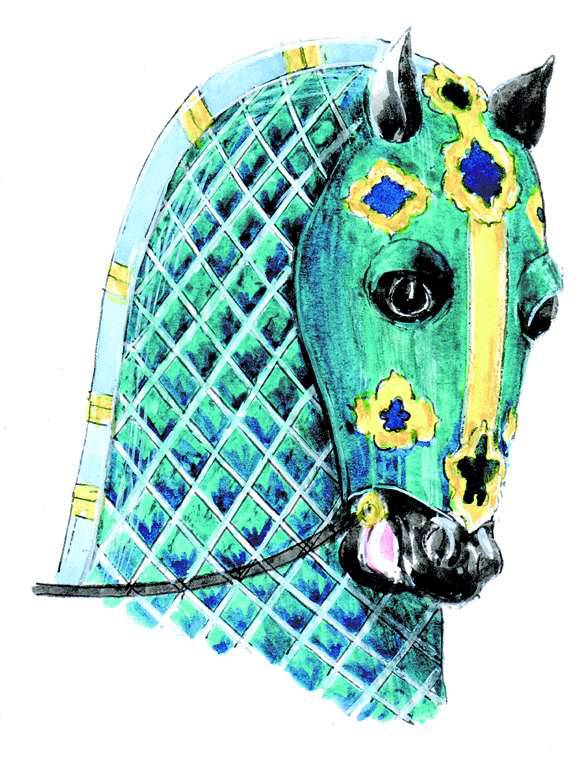 Horse in quilted blanket and headband. Fig. A. Shepsa

Interestingly, judging by the thumbnails, in Persia at the beginning of the fifteenth century. about half of all riders that are depicted on them have armor on horseback. The Great Mogul army (judging by the 1656 - 1657 miniatures) also had such riders. 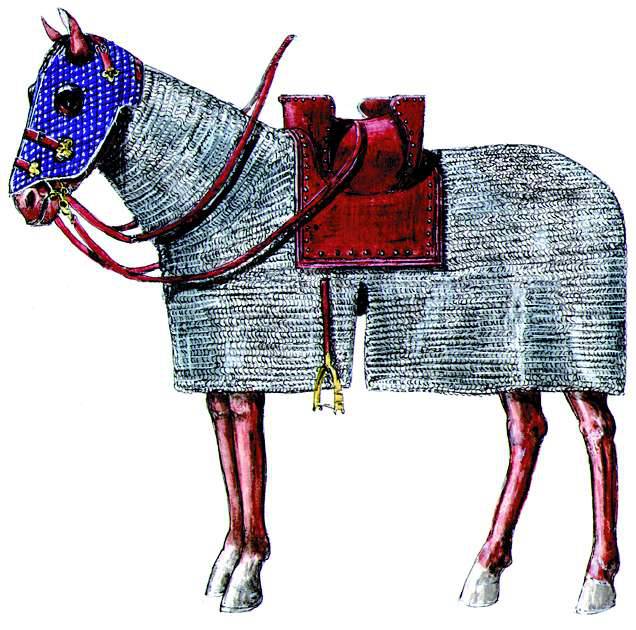 Horse knight covered with chain mail armor. The beginning of the XIV century. Fig. And Shepsa.

In Europe, the Hundred Years War played an important role in the development of horse armor, showing a clear superiority of the bow and crossbow over the multilayered chain mail-plate armor popular at that time. The knightly horses were very expensive then, in order to expose them so easily to the shots of commoners, so they began to defend them! Therefore, it is not surprising that if the knight’s armor mostly had to protect him from spears and swords, then the horse’s armor would be protected from arrows. And mostly ... fallen from above! After all, the archers did not let them out right on target (like in the movies!), I.e. aiming at the horse's head and chest, and sent them to the sky along a steep trajectory so that they would then fall on the horsemen and their horses from above, hitting the horses in the croup, in the neck in the region of the mane. That is why these parts of the body were “booked” right up to the complete disappearance of the armor, although the master armorers also did not neglect breast lats. 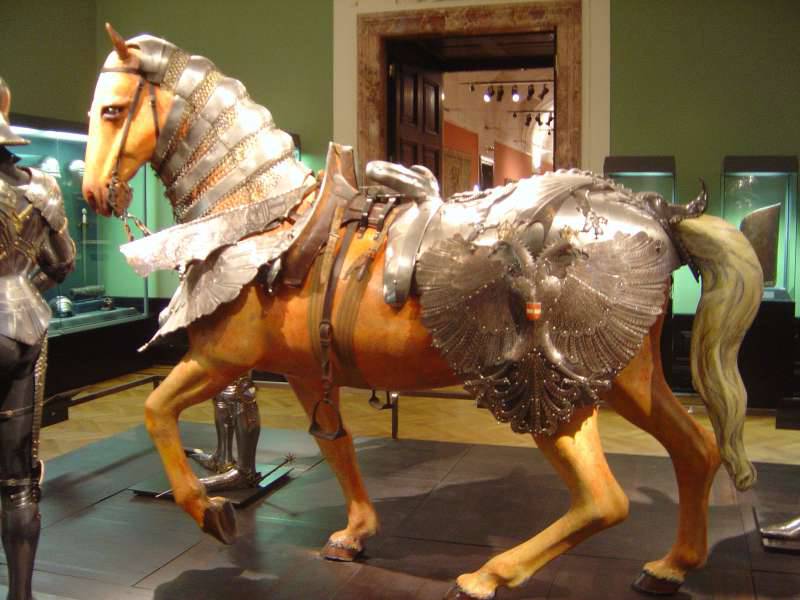 In the XV and XVI centuries. solid solid armor made from metal plates, like those in which the knights themselves fought, appeared. As a rule, they covered the whole body of the horse, including the neck and croup. Large metal surfaces were decorated with gilding and chasing, and drawings for it were made by many great artists of their time. It is clear that these armor, plus the rider armor, were so heavy that only the strongest horses could bear such a weight, the cost of which (as well as the cost of armor!) Was a fortune! 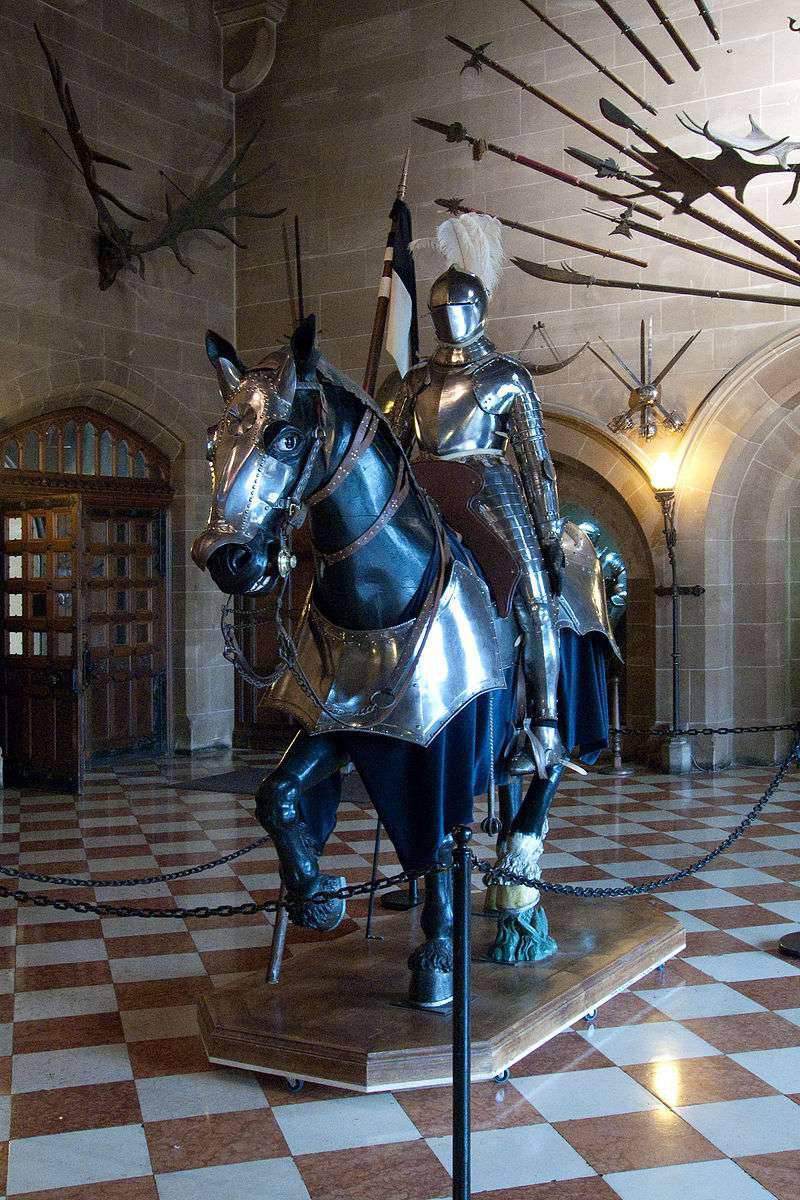 Varvik Castle - a medieval castle located in the city of Warwick (Yorkshire in central England): a knight on horseback and both in armor.

But in Japan, samurai only rarely used armored "clothes" for their horses. Well, it is clear why. After all, most of the territory of Japan is covered with mountains (75% of the area!), Most of which are overgrown with forest, and they needed small frisky horses to ride along mountain paths, and not heavy knightly horses, like European ones, capable of carrying a large load, but only on level ground. That is why horse armor in Japan has not taken root, as well as shields, which the samurai due to the specifics of their weapons were not needed! 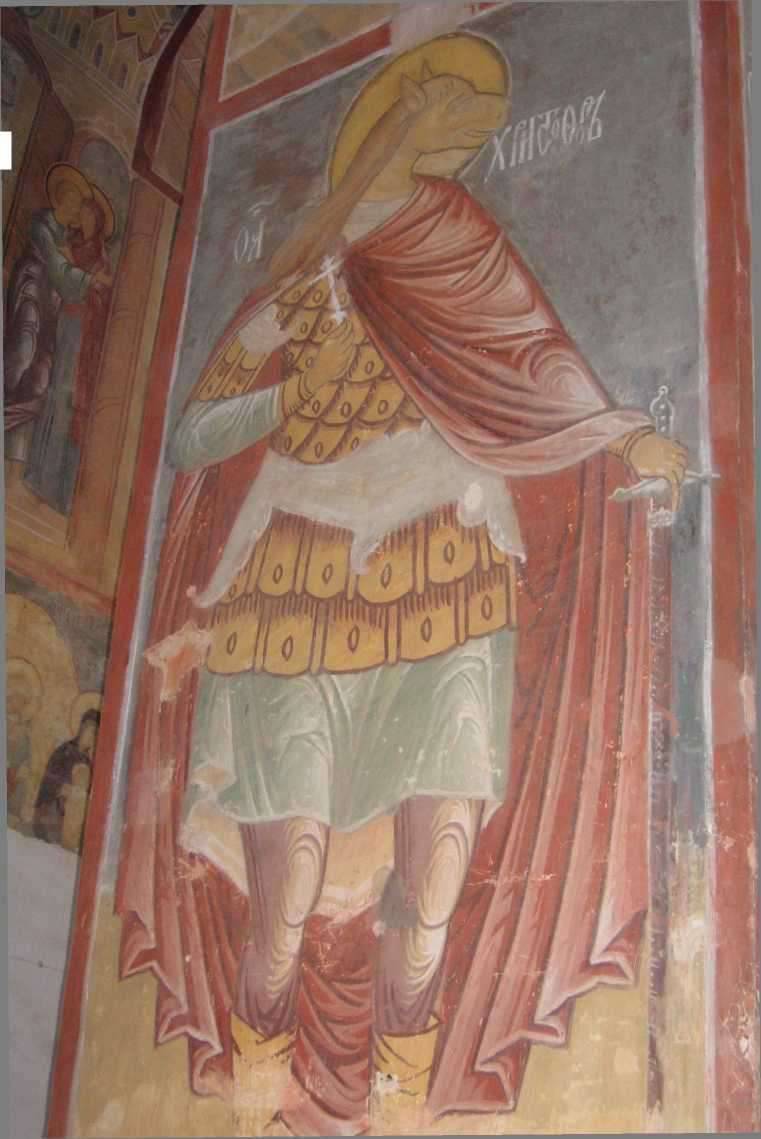 St. Christopher. The painting of the XVI century. on the wall of the cathedral in Sviyazhsk. Photo by the author.

Interestingly, if we are talking about "dressed horses", then the most famous "horse" dressed in scaly armor will need to be recognized ... St. Christopher, who, by the will of the Lord ... had a horse head! Well, and in armor and with a sword in his hand painters of Ivan the Terrible were depicted on the wall of the temple on Sviyazhsk Island, not far from Kazan. Well, and in our modern era horse blankets were left only with rare cabs. 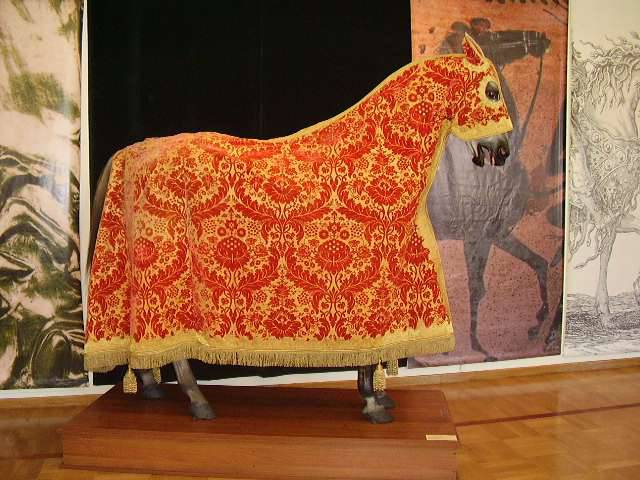 Ctrl Enter
Noticed oshЫbku Highlight text and press. Ctrl + Enter
We are
Belarusian wonders. Is the museum easy?Father told
52 comments
Information
Dear reader, to leave comments on the publication, you must to register.