February 3 2016
77
US Senator McCain suspects that some European countries have launched to lift economic sanctions against Russia. McCain does not approve of these ideas: the final decision on the lifting of sanctions does not depend on Europe, but "on American leadership." Another senator, Bob Corker, voiced his prediction about the imminent "destabilization" of Putin’s rule. The “destabilizing” effect will manifest itself from the awareness of Russian citizens of the following simple truth: the one who made a “huge personal fortune” is sitting in the Kremlin. In the meantime, American analysts have suggested that reducing oil production in the world will not save either Russia or the Middle Eastern monarchies. Oil will remain cheap. 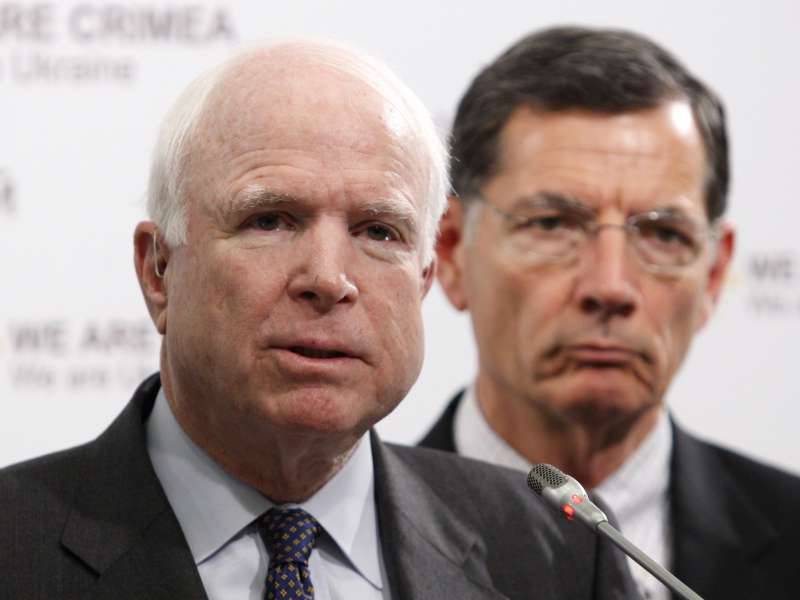 Republican Senator John McCain reminded the agency "Sputnik"that it is included in the Russian list of sanctions. “They [the Russian lawmakers] have already authorized me. I think this is a sign of honor, ”he said. And he added that, in his opinion, it would be necessary to include more Russian citizens in the sanctions list of the United States. The senator was motivated by the “bad behavior” of the Russians. “If you continue to behave badly, we will continue to impose sanctions,” Mr. McCain explained.

Speaking about the use of broader economic measures against Russian citizens, Mr. McCain pointed out that a number of European countries are looking for ways to lift economic sanctions from Russia. According to him, there is a lot of talk among Europeans about the lifting of sanctions. “Many countries” are thinking about this. For a few months already, McCain hears “conversations” and believes that there is “tremendous pressure” on cancellation in many countries, especially in Germany.

McCain made it clear that the final decision to mitigate the sanctions "will to some extent depend on American leadership."

The corresponding question will probably be decided “on the margins” of the upcoming security conference in Munich. As the senator believes, there will be no open discussion of the sanctions issue; the Europeans will talk about the sanctions behind the scenes.

This "hawk" predicts the coming "destabilization" of Putin's rule in Russia. Where does she come from? It turns out that the “destabilization of the government” of President Putin will be generated by information “about the wealth” of the Russian leader.

Press reports about the "personal status" of the Kremlin owner will create a "destabilizing" effect. “The Russian people began to realize that at the head of the country is a leader who has accumulated a huge personal fortune,” said Corker. The senator is convinced that information about this condition can lead to "additional instability" in the country.

Moreover, it turns out that Mr. Corker also knows the sources of the “billions” that make up Putin’s “personal” wealth.

However, the senator did not give out any secrets, but simply said that such money can be obtained "only with the help of corruption."

Meanwhile, American analysts have suggested that a reduction in oil production in the world will not save either Russia or the Middle Eastern monarchies. Oil will remain cheap.

Last week, the Russian energy minister talked about the likely reduction in the supply of crude oil, coordinated with OPEC. And what followed this statement? Well, there was a short-term fluctuation in oil prices: by the end of the week the “Brent” grade was rising to 34,74 dollars per barrel, but from the new week the price went down again.

According to the analyst, the reason for the unreliability of oil prices is not at all in the small likelihood of achieving "harmony" in Russia's relations with Saudi Arabia, as well as other oil producers. Even if the Russians conspire with the Arabs, their union will not allow finding a quick solution to a complex task.

The author considers the reduction of the prey itself extremely unlikely. During the periods of the last two oil price collapses (at the end of the 1990s and in 2008), the Russians did not reduce, but increased production, and this despite the decrease in the level of production by the OPEC countries. The current situation, complicated by sanctions and the closure of access to Western capital, in general does not allow Russian commodity companies and the government to reduce the supply. Russia has a “critical” situation with cash inflows, and this applies to both the owners of oil companies and the Kremlin.

And is it possible for the Russians to gain something from the reduction of production? The analyst strongly doubts this, since the market is influenced by two major factors: Iran and shale oil.

According to the International Energy Agency, commercial oil reserves in the OECD countries for the third quarter of 2015 amounted to three billion barrels (this is approximately equal to the future demand for the 64 of the day). So that market players can play on long-term price changes, they need to reduce the number of these days to an indicator below 60.

What do we see today? If we take into account the forecasts of the same International Energy Agency and take the OPEC production level without a reduction, we will get the indicator of “prospective days” in the second quarter of 2016 of the year above 72 days! Only then will he begin to decline, and extremely slow. One should not forget about the slowdown in industrial production in the PRC. In short, the "bottom" of the oil market is still ahead.

Well, let the Russians and the Saudis, and the other countries of the cartel, reduce their loot. On 5%. Say, about two weeks later. The result will be as follows: supply to the world market will decrease by almost 1,4 million barrels. per day.

This is quite a lot. With other conditions unchanged, the volume of oil reserves will begin to decline. Probably this spring. So what? These reserves will still be enough to meet prospective demand in QIII of 2016 for about 69 days.

And do not forget about Iran. This state will smooth out the effect of possible actions by Russia and OPEC. Tehran wants to regain its market share, lost due to the earlier sanctions.

Again, take the forecasts of the International Energy Agency. According to experts, oil production in Iran will increase to 3,6 million barrels per day in just six months.

Let Iran increase production to 3,6 million barrels per day by the end of 2016, that is, slower than what the agency sees. Let us assume that the production volumes in the United States will stop declining by the second quarter. In the end, it turns out that oil reserves in this quarter will continue to be at the maximum level. And until the third quarter for OECD countries, they will remain at the level of future demand above 70 days.

Therefore, if Russia and OPEC reduce production by 5%, it will still take a lot of time to eliminate the excess oil on the market. So is it necessary to reduce the prey? We should not forget that with a reduction in volumes, oil sellers will receive a lower income.

Given the future activities of Iran and US shale oil, it becomes clear that competition has led not to a reduction in supply, but to their growth. Saudi Arabia has increased production to the limit. To cut supplies would be to cede the market share to the same Iran or American companies, or to any oil producers altogether.

As we see, American politicians and analysts clearly imagine the near future of Russia.

Those who talk in Europe about the lifting of sanctions risk running into Washington’s resistance. In particular, they may have to deal personally with John McCain, an ardent supporter of anti-Russian sanctions. This senator explained in an accessible language that the final decision on easing the sanctions "will depend on the American leadership."

To those who think that Russia is still getting out, another senator told the whole truth. Republican Bob Corker believes that the “destabilization” of Putin’s rule is coming: the citizens will dislike their ruler, who has “acquired” a huge “personal fortune” in “corruption”.

Nor will the Russians be saved by the likely reduction in oil production, which politicians at the highest level have been saying lately. The reduction in supply will only lead to loss of profits and the transfer of market share to other commodity players.

Wherever you throw, everywhere wedge. So think of Russia in America.

Ctrl Enter
Noticed oshЫbku Highlight text and press. Ctrl + Enter
We are
Situational analysis of the death of the MH17 flight (Malaysian Boeing 777), made on the basis of engineering analysis from 15.08.2014Results of the week. “Excuse me, aren't you crazy?” - “No. I have a certificate "
77 comments
Information
Dear reader, to leave comments on the publication, you must to register.