The Russian economy has grown out of dependence on oil expor 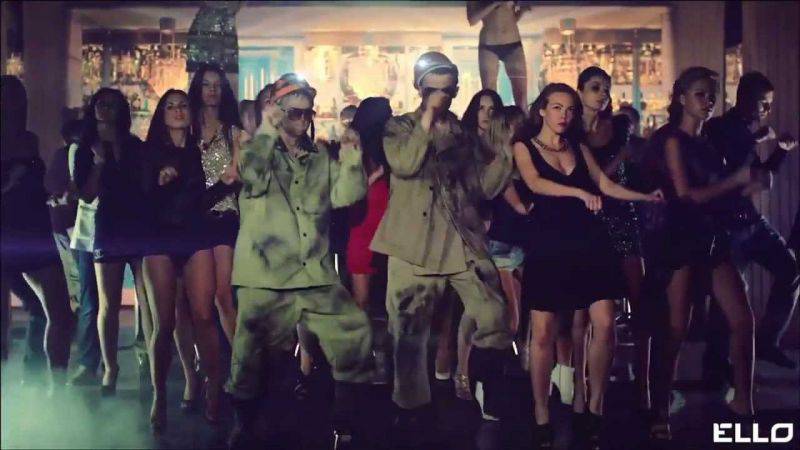 A graph showing the change in world oil prices and gross domestic product of the Russian Empire / USSR / Russian Federation, starting with 1860 and ending with 2012, came into my order. 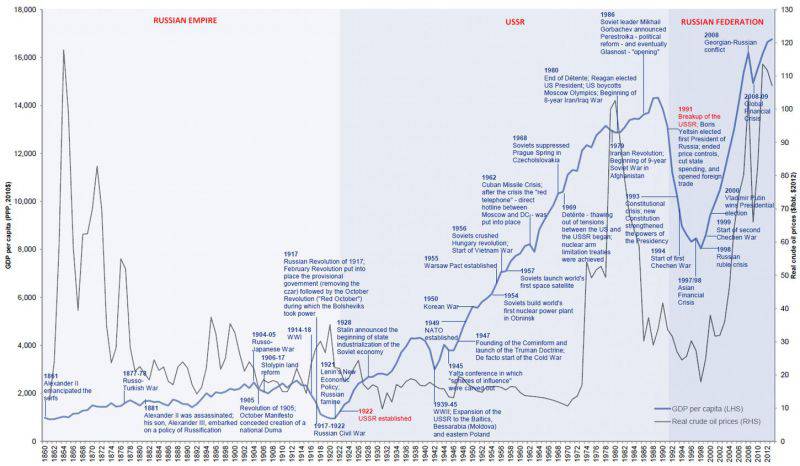 As you can see, the graph is made by Western burzhinami (and with their characteristic phraseological units and terms), so that later yelling that the data are forged by “Kremlin propaganda” will not work.

Black denotes the dynamics of changes in the price of oil, blue denotes the change in GDP of the Republic of Ingushetia / USSR / RF (in dollars 2012 of the year).

This schedule allows us to draw several conclusions regarding different events and time periods.

1. Period from 1860 to 1914 years. As we see, growth is very slow, so the monarchist tales that Russia under tsarism was a “dynamically developing country” are tales that have no basis. And if they are outraged strongly loud, then I will make a separate article, where the facts will break these myths to pieces.

Particularly obvious is the lag of the Russian Empire at that time, if we compare it with the explosive growth of production in the nineteenth century as a result of the industrial revolution in England, France and Germany. If someone wants to learn more about this, I recommend reading the report of the Vernadsky Commission, and not the writings of modern monarchists.

2. Period from 1922 to 1940 years. Dynamic growth as a result of first GOELRO and NEP, and then industrialization.

As I already wrote, the leadership of the USSR very competently used the Great Depression in the USA, and while the factories were closing there, in the USSR they opened.

It was the explosive growth of production as a result of Soviet industrialization that made it possible to create an industrial potential that was sufficient to repel the Nazi invasion. If Russia developed at the “royal” pace, then Hitler would have easily reached the Urals.

3. Period from 1941 to 1945 years. As you can see, the fall of the USSR GDP during the Great Patriotic War was relatively insignificant - no more than 20%. And by the end of the war, this fall was almost eliminated.

This is despite the conduct of a total war of high intensity, general mobilization, the Nazis seized the vast majority of the European part of the USSR, a large-scale transfer of production to the Urals, the use of female and child labor due to the catastrophic shortage of workers.

The lying junta is trying to write it off to war, but

a) the conflict in the Donbass is fought with low intensity, there is not even a question of any total war;

b) production on the territory of the remnants of Ukraine are intact, no one is bombing them (except for raider attacks by the “patriots” who follow the orders of the oligarchs), there is no sea blockade either, no one drowns convoys or blows up trains;

c) there is no general mobilization;

d) there is no shortage of workers, on the contrary, huge unemployment (including hidden).

So the overwhelming part of the fall in Ukraine’s GDP is the result of “European integration” (which all normal economists, starting with Glazyev and ending with me), warned them for years and the incompetence of the puppet junta. Moreover, I am deeply convinced that by destroying many branches of the Ukrainian economy, the puppet regime fulfills the order of its Western masters to destroy their competitors.

4. Period from 1948 to 1980 years. We again see a stable dynamic development of the economy of the USSR.

Firstly, what is striking is CRIMINAL. The only period of a slight decline was after the financial reform of 1960-61 of the year, when market elements were strengthened in the economy of the USSR.

Secondly, strong and steady growth most of this time occurred with low oil prices. Moreover, when oil prices jumped upwards, no acceleration of development occurred.

So the statement that the USSR was economically inefficient and dependent on oil prices is an obvious lie. And its collapse is not the result of economic inefficiency (from the graph we see that, on the contrary, it’s quite effective), but the result of the betrayal of the “elites”.

This is confirmed by the fact that the fall in USSR GDP occurs on the chart only after Gorbachev came to power.

5. Period from 1991 to 1998 years. The period of Yeltsin's rule and total liberal sabbath. The continuous decline of the economy.

And now the people who are responsible for the gulf and the devastation of those years, criticize Putin’s economic policy, give advice (which no one asks for them) and yell “let me steer again”.

As the street kids in the “Shkid Republic” said, “And what about hu-hu not ho-ho?”.

6. Period from 1998 to 2012 year. Putin's board / Medvedev. Explosive growth, largely offsetting the fall of the liberal nineties. And here, too, there are several interesting patterns.

First, as a result, they arrived at indicators that are worse than if no one had collapsed in the USSR. Just continue the line of the Soviet trend to be sure. Why ruined? Unclear.

Secondly, the economic policy of the Kremlin during this period can safely be called "state capitalism". What proves my theoretical calculations still 2007-2009's, that the state capital is a much more effective form of economic policy than market liberalism, leading to the domination of transnational companies (TNCs).

Thirdly, yes, it is obvious that high oil prices during this period helped faster growth. But, if the dependence was direct (according to the liberals and the "guard patriots"), then with the fall in oil prices and the fall in GDP would be proportional.

Over the past couple of years, oil prices have fallen by more than three times, and GDP has decreased by a couple of percent. How so? We look at the tablet with the "Huspert". 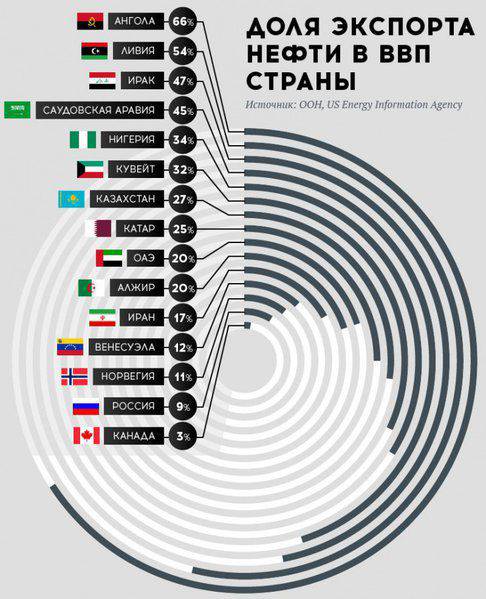 The share of oil in Russia's GDP is about 9%. Simple arithmetic shows (you have not forgotten how to multiply and divide?) That its fall should have caused a drop in GDP of about 6% three times. Maximum.

But it really fell even less. Why? And because other non-commodity sectors were growing at that time. What, of course, no belolentochny horse never recognizes.

Even if the price of oil in the world drops to zero, and trade in it stops completely, then Russia's GDP will drop even a maximum of a couple of percent. And, most likely, it will be mostly compensated by growth in other industries, including the same by import substitution (which the weak ruble helps a lot - why, as I have already explained in previous publications).

Therefore, if you grow wet dreams of the collapse of the Russian Federation as a result of fluctuations in the price of oil - you will face a cruel bummer.

Ctrl Enter
Noticed oshЫbku Highlight text and press. Ctrl + Enter
We are
What you didn't want to know about EnglandWhat we lost
98 comments
Information
Dear reader, to leave comments on the publication, you must to register.