Latvian "historians": "The camp in Salaspils was not a death camp"

February 1 2016
68
January 27 in the Latvian Military Museum held a presentation of one interesting booklet, whose authors were those who call themselves historians - Karlis Kangeris, Uldis Neuburgs and Rudite Viksne. The title of the book, presented on the International Holocaust Remembrance Day, is as follows: “The ground groans behind this gate. Salaspils camp 1941 -1944 ». It would seem that the title itself suggests that the book is intended to provide further evidence of Nazi atrocities (including Latvian collaborationist formations) in the Salaspils camp, that the book should become an important reminder of the current crimes of Nazi executioners, for whom there can be no statute of limitations. However, the listed “historians” have given material that pulls on the prize “Attempt to whitewash Nazism. Part of the next.


On the Baltic radio station Baltcom A report was published, during which Kangeris, Neiburgs and Vixne, fulfilling the explicit order of the Latvian elite, said that their book “proves a distortion of facts about stories Salaspils. Portal "Latvian News" writes that, according to the statements of these pseudo-historians, the Salaspils camp (aka Kurtenhof) was not a concentration camp and was not a death camp, but was a kind of transit platform that provided “population traffic from the USSR to work in Germany”. The “historians” report that all previous studies on the death of thousands of juvenile prisoners in the Salaspils camp are “Soviet mythology” and that “only 2 thousands of people” died in the camp, and for reasons that “cannot be related to improper relationships to prisoners. " The whole message is connected with the fact that in Salaspils the Nazis staged almost a resort zone, in which the elderly, women and children were protected day and night, holili and nurtured Jews, and those that you will do, decided to die, so that by this fact future to discredit the most democratic Latvian state and the Nazi system in the world ...

As a summary of the book’s presentation, the authors note that Soviet propaganda "exaggerated the numbers of victims." They say there were victims, but that the Nazis carried out their monstrous experiments on children - God forbid ... They say that there was no such thing. Well, a self-respecting Nazi can afford to kill a Russian or a Jewish child ...

From the statement of the "historian" Neiburgs:
We know that in total there were 3000 children in the camp, who were brought there for a short time. And we categorically deny that blood sick children was provided for the treatment of soldiers of the Wehrmacht.

Amazing you, Mr. Neuburgs, a personality ... In one sentence, they managed to organize an enchanting juggling of facts. The fact is that not only do you deny the selection of blood from sick children. And deny this fact for the simple reason that blood has sick children Nazi camp personnel and did not take. Why do you need blood the sick a person to use it for medical purposes in relation to someone healthy (wounded Wehrmacht soldiers, for example)? The Nazis made a selection of blood from healthy children. That is the fact. And if Mr. Neiburgs had set himself the goal of not clumsy attempts to serve the customers of his delusional material, but really got acquainted with the archival documents and testimonies of the prisoners themselves, in these documents and testimonies he would find a lot of materials about how “working” with healthy prisoners was carried on, and how these healthy prisoners were eventually turned into the walking dead. Although it is hardly necessary to admit that the Latvian historians did not get acquainted with the materials. Of course, got acquainted. Only now their task was to try to present these materials in a completely different form, to alter, mix with the pseudo-historical dirt, seasoning it with modern pro-Nazi propaganda, which in the Baltics has become an integral part of statehood. All this mouse-like romp of various Neuburges (and there were dozens of other similar “experts” before Neuburgs, and not only in the Baltics) is in replicating pages that nourish Nazism, which in the future can be referred to by some “progressive” adherent of Western democracy. They say that the camps are not camps, prisoners are not prisoners, the Nazis are pacifists, and the rest is “Soviet propaganda”, for which Russia “must repent immediately”. 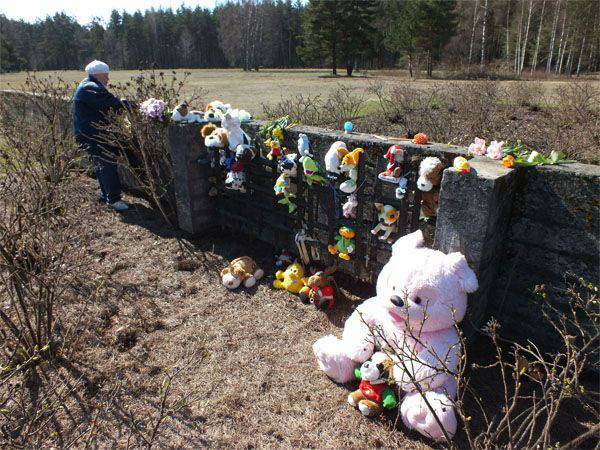 The nonsense written by modern Latvian historians can be called exorbitant, if only because the book of the authors mentioned completely ignored the testimonies of those prisoners from Salaspils collegiate who could survive and bring these blood-curdling evidence to new generations. In other words, Neiburgs & Co. simply sifted out the many facts that prevented them from arranging the material, and eventually published fairly filtered pulp that could only be used to melt a fireplace or put them in a cat litter.

And here are the very testimonies (several excerpts from a large list) that were previously published in memorial books, mass media or attached to criminal cases against Nazi criminals (including Latvian nationalities).

From the memoirs of Ivan Syrtsov (at the time of hitting the Salaspils camp - 14 years), a resident of Ludza County (territory in eastern Latvia) (material Foundation for the Development of Culture):

In the camp we were struck by an unprecedented spectacle. Here was a live carousel of prisoners. Prisoners with stretchers ran in a large circle and, without any need on the stretchers, transferred ground from one place to another. The Gestapo man watched with a scornful look at this senseless occupation and from time to time shouted: “Faster, faster!” And the people fled. Sweaty, thin, exhausted. Another picture alarmed us. At the end of the camp, several ragged and weary people were moving. They had round white stripes on their chest and back, some with a “Fluchting” sign hung on their neck. People walked in pairs, each pair had a long pole on their shoulders. On it is a large vessel filled with contents from the camp toilet. The contents were carried off and poured onto the empty outskirts of the camp. Later we learned that the convicts were supposed to carry 14 hours a day. And at lunch porters received only half of the prescribed portion. They were not allowed to rest. People had to be in motion all day. And they moved - until they fell from their feet. These were prisoners, for various offenses enrolled in the so-called “penalty group”. (...) 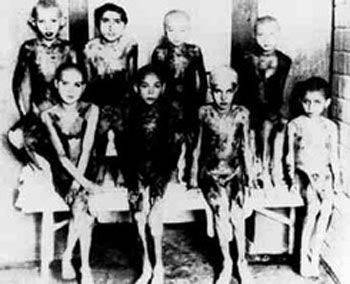 On the day received 100-150 gr. bread and half a portion of gruel. (...) The barracks were about 30 meters long. Upper floors occupied families with adult family members. The barracks were designed for 250-300 people, but it fit into 500. In each hut stood two ovens. In October and November they were not yet heated. (...) Soon, measles and dysentery began to rage in the barracks. The children were unable to resist the disease, many died. It was impossible to sleep at night in the barracks. Lice, fleas and bugs were constant companions of prisoners. Often, at night, people undressed and, by the light of a dim bulb that burned high under the ceiling, destroyed insects.

Occasionally, the camp administration, "taking care of cleanliness," ordered disinfection of barracks and things. At the end of September, our barrack was also disinfected. At this time we were sent to another hut - insulating. At first it was necessary to go through the “bath”. All undressed. All together - men, women and children - were naked driven into the “bath”. The water was cold. After the bath hastily issued "underwear". Some got a shirt, others - cowards, others - shirts. After the bath, women with small children were placed in a separate isolation hut, men - separately, in another. It was necessary to go through the so-called ten-day quarantine. There was no bunk in the hut. They lay and sat on the floor where rotten straw was laid. They put in a hut about 300 people. All this number of people in the barrack had two toilets. Nobody was let out for ten days.

From the memories of the former prisoner of the camp in Salaspils Akilina Lelis (http://old.subbota.com):
In Salaspils, children were tortured furiously. They injected them with some kind of liquid, and after that the children expired with diarrhea. They were given poisoned balanda, and that was the day before the 150 people died. 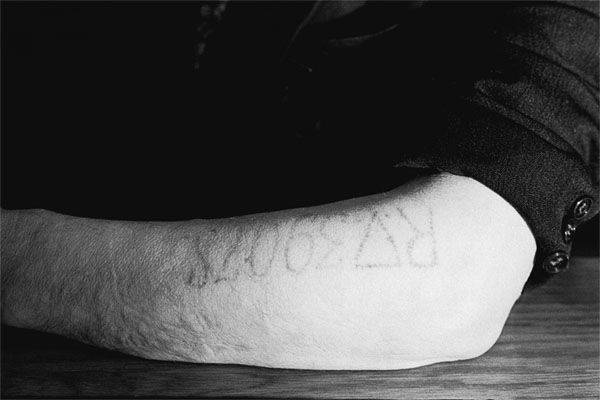 From the memoirs of the former prisoner of the camp, Marta Trede (at the time of her arrest, she worked as a postman and Latvian policemen were suspected of having links with Soviet partisans):
I remember the day when the kids were brought here. They drove us out of the barracks, built us to watch how the armed guards take away children from their mothers from the neighboring barracks. Russian women lived there. The guard pulls her baby out of the mother’s hands, kicks the legs herself, and the shutsmans (the representatives of the security team - author's note) throw the child like a log from hand to hand.

In the air stood desperate, almost insane cries. Mothers tore their hair and begged the guard:
- Shoot us!
We stood as paralyzed ...

From the memoirs of the former prisoner of Salaspils (YouTube channel - Yuri Chirkov):

From the Act of the extermination of children in the Salaspils concentration camp from 5 in May 1945 g:
Surveyed the area at the Salaspils camp in 2500 square. m and during the excavation of only a fifth of this territory, the commission found 632 children's corpses presumably between the ages of 5 and 9 years, the bodies were arranged in layers (...) In 150 meters from this burial in the direction of the railway, the commission found that on an area of ​​25х27 m the soil is saturated with oily substance and mixed with ash containing the remains of unburned human bones of children 5 — 9 years — teeth, articular heads of the thigh and humerus bones, ribs, etc.

From the collection of archival documents, ed. Europe, 2006 year:
In the death camp of Salaspils, about 3 killed thousands of children to 5 in the period from 18 in May 1942 of the year to 19 in May of 1943. Their bodies were partly burned, and partly buried in the old garrison cemetery near Salaspils. The vast majority of them were subjected to pumping blood.

Isn't it true that stating the full publicity and built democracy, Latvia continues to juggle historical facts, trying to make national heroes from Nazi criminals, and from victims of Nazism - the object of oblivion. Although in relation to modern Latvia, in principle, there is nothing strange and there is no ... But the country that won the western democracy, for which lies and the perversion of history are the basis of existence.

Ctrl Enter
Noticed oshЫbku Highlight text and press. Ctrl + Enter
We are
"Army games 2015". Opening with our eyes. ReportageReport from TsNIITOCHMASH. Part I. Weapons and ammunition
68 comments
Information
Dear reader, to leave comments on the publication, you must to register.