Ivan Dmitrievich Papanin. The famous explorer of the Arctic

February 2 2016
21
26 November 1894 was born one of the main researchers of the Arctic, the pioneer of the study and development of the North Pole, Ivan D. Papanin. He lived a rather long life - 91 year. Papanin passed away on January 30 1986, exactly 30 years ago. Over the years of his life, Ivan Papanin was awarded many awards, including twice managed to become a Hero of the Soviet Union, he was also awarded with nine Orders of Lenin at once. In addition, he had the title of Rear Admiral and the degree of Doctor of Geographical Sciences. He became widely known in 1937 year, when he led an expedition to the North Pole. During the 274 days, four fearless workers of the SP-1 station drifted on the ice and observed the Earth’s magnetic field, as well as the processes that occurred in the atmosphere of the Arctic Ocean.


Ivan Dmitrievich Papanin was born in Sevastopol. His father was a sailor in the port, so that the whole life of the boy passed near the sea, as a teenager, he began to work, finishing only 4 classes of elementary school. Already in 1908, he went to work at the Sevastopol plant for the manufacture of navigation devices. On this occasion, he later remarks with Chekhov's words: "In childhood, I did not have a childhood." In 1912, Papanin, as one of the best employees of the enterprise, was transferred to the shipyard in Reval (today Tallinn), and in 1914 he was called up for military service. At the same time, Ivan Papanin was again in the Crimea, since he was sent to serve on the Black Sea Fleet. In the years 1918-1920 he took part in the Civil War in Ukraine and the Crimea (organization of rebel groups and sabotage). Since 1920, he was commissioner of operational management under the commander of the naval forces and forces of the Southwestern Front. Since November 1920, he served as the commandant of the Crimean Cheka, worked as an investigator. In 1921 he was transferred to work in Kharkov as the military commandant of the Ukrainian Central Executive Committee, after which from July 1921 to March 1922 he worked as secretary of the Black Sea Revolutionary Military Council fleet.

Two years later, he was promoted, and he was transferred to Moscow, where the young Chekist was dealing with postal services, and later headed the Central Directorate of Paramilitary Guards. The connection was associated with his work in Yakutia, where he led the work on the construction of radio stations. While still in the capital, in 1923-1925 he managed to study at the Higher Communication Courses, it was after their graduation that he went to Yakutia. 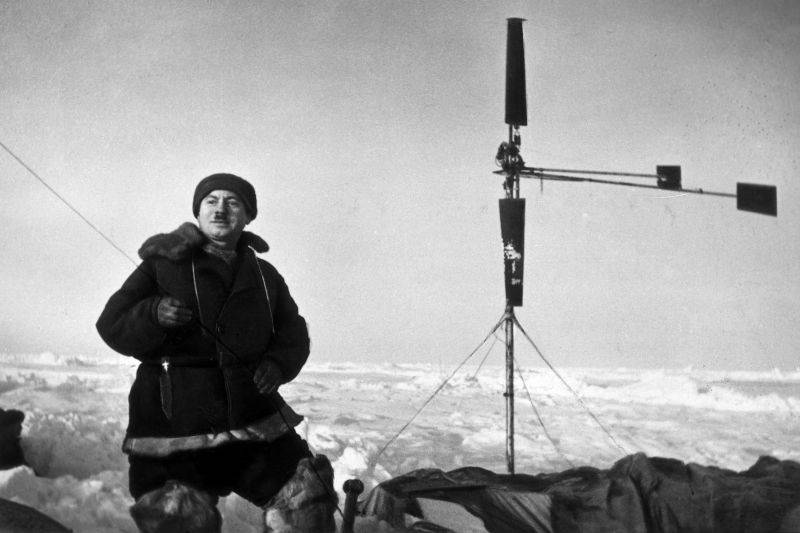 Ivan Papanin's activities in 1932-1935 were also associated with being at the very edge of the earth. In 1932-1933, he was the head of the Tikhaya Bay polar station, which was located on Franz Josef Land, and in 1934-1935, he worked at the station that was located on Cape Chelyuskin. That is, he had to work in very harsh conditions. However, it was then that Papanin, most likely, finally and irrevocably fell in love with the Arctic.

Later, Ivan Dmitrievich waited even more difficult tests. In 1937-1938, something happened that made Papanin famous in our country and the world. He led the world's first drifting station, the North Pole. The scientific results, which were obtained in a unique drift, were presented to them by the General Assembly of the Academy of Sciences of the USSR 6 in March 1938, and were highly appreciated by specialists. The work of the drifting station really allowed to collect a lot of important and new information about the harsh Arctic region. For the selfless work in the harsh conditions of the Arctic, all members of this famous expedition were presented to the rank of Hero of the Soviet Union. At the same time, Papanin, together with the radio operator of the station Krenkel, received the degree of Doctor of Geographical Sciences.

At the end of 1939 of the year - the beginning of 1940, Ivan Papanin successfully organized an expedition to rescue from ice captivity after the 812-day drift of the icebreaker “George Sedov”. For a successful expedition to save the icebreaker, Ivan Dmitrievich was presented for the second time to the rank of Hero of the Soviet Union. It is worth noting that from 1939 to 1946 the year he headed Glavsevmorput. Papanin held the post of Chief of the Main Coast Sea Corps and Commissioner of the State Defense Committee for Transportation in the North throughout the Second World War. His work as chief of the Central Sea Route was also important in the pre-war years, as it allowed to solve many problems with the transportation of goods through the NSR. The first years at this high post he paid great attention to the construction of powerful icebreakers in the country and the development of Arctic navigation. During the war years, he successfully organized the reception and shipment of military cargo to the front, which came to the USSR by sea from the United States and Great Britain, for which he received the rank of rear admiral in 1943. 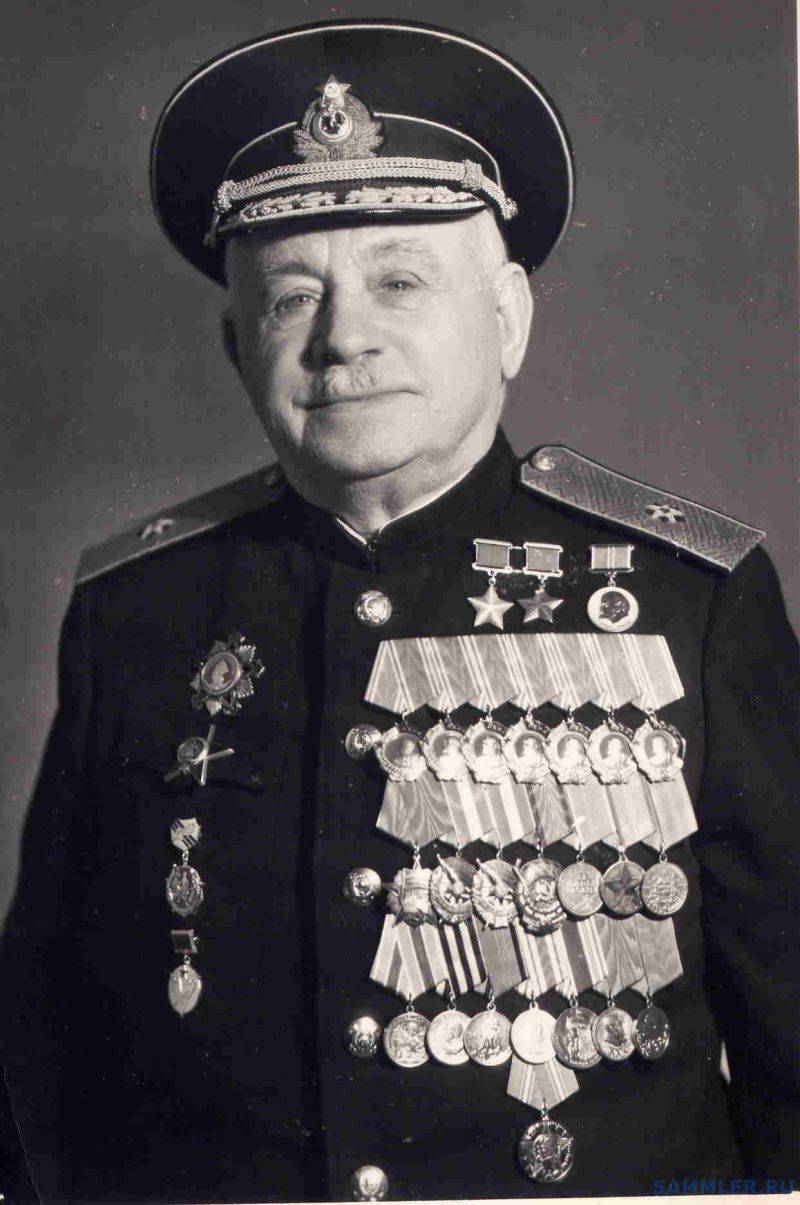 In the postwar years, Papanin gradually retired from practice. He retired in 1949, due to heart disease (he had angina). However, he did not give up to engage in theoretical scientific activities. 1949 to 1951 He was the deputy director of the Institute of Oceanology of the USSR Academy of Sciences for expeditions. Starting from 1951 and until the end of his life, Ivan Dmitrievich Papanov headed the department of marine expeditionary works in the Presidium of the USSR Academy of Sciences. In parallel with this, from 1965, he was also the director of the Institute of Biology of Inland Waters of the USSR Academy of Sciences, located in the village of Borok. He also served as chairman of the Moscow branch of the Geographical Society of the Soviet Union.

Ivan Dmitrievich Papanin died on January 30 of the year 1986 from chronic heart failure at a rather old age - 91 year. He was buried in Moscow at the Novodevichy cemetery. During his life he managed to become an honorary citizen of four cities at once - his native Sevastopol, as well as Arkhangelsk, Murmansk and Lipetsk, and even one region - Yaroslavl. A cape located on Taimyr, mountains in Antarctica and the Pacific Ocean, and an island in the Azov Sea were named after him. Also, streets in a number of cities of the Soviet Union were named after Papanin.

Ivan Dmitrievich Papanin is an academic with no education. At the time, he did not even receive a secondary education, the boy attended elementary school throughout 4. The plant has become a real “school of life” for the famous polar explorer. Only working in the People's Commissariat of Communications, Papanin graduated from the Higher Courses of Communication. At the same time, the lack of education did not prevent him from becoming a doctor of science in 1938, he received this degree for the results achieved as part of the operation of the station SP-1. Later he was able to become an academician of the Academy of Sciences of the USSR, as well as deputy director for expeditions of the Institute of Oceanology of the USSR Academy of Sciences and director of the Institute of Biology of Inland Waters of the Academy of Sciences of the USSR. Not everyone can achieve such success with proper education. The same can be said about his military rank. Papanin became Rear Admiral in 1943. Before that, he was only an ordinary sailor during the First World War and did not have any special military education. 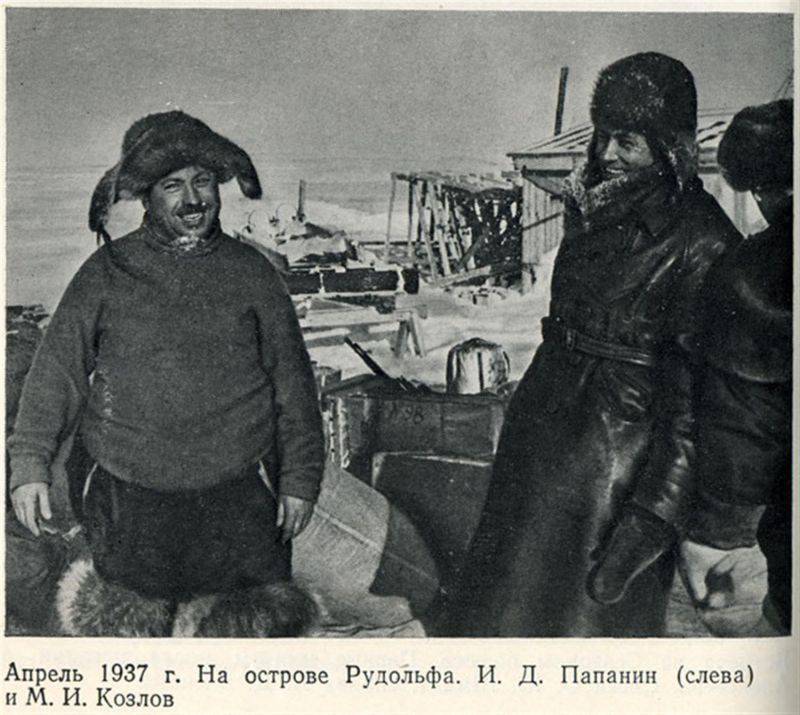 The work of the first Soviet drifting station SP-1 (North Pole-1) marked the beginning of a systematic study of high-latitude areas of the polar basin in the interests of navigation, hydrology and meteorology. Started on 6 on June 1937, the station drift lasted 9 months (274 of the day) and ended on February 16 on 1938 in the Greenland Sea. During this time, the ice floe on which the station was located, swam 2100 kilometers. The participants of this polar expedition in incredibly difficult working conditions managed to collect and systematize unique material about the nature of the high latitudes of the Arctic Ocean. Leader Ivan Papanin, radio operator Ernst Krenkel, meteorologist and geophysicist Yevgeny Fedotov, and hydrobiologist and oceanographer Peter Shirshov took part in this expedition.

Perhaps no event in the interval between the two world wars did not attract as much public attention as the drift of the “Papanin Four” in the Arctic. Initially, they drifted on a huge ice floe, whose area reached several square kilometers. However, by the time the expedition was completed, the size of the ice floe no longer exceeded the size of the volleyball court. At that moment, the whole world was following the fate of Soviet polar explorers, wishing them only one thing - to return from this expedition alive.

The feat of the four "Papanins" was immortalized in the Soviet Union in different ways. So in 1938, a series of postage stamps was published, which was dedicated to the expedition “SP-1”. In the same year, the book Life on the Ice was published by Papanin himself. In addition, over the course of several years, all Soviet boys played “papanitsy” and conquered the North Pole, which was reflected in the literature of those years (for example, Valentina Kataeva, Tsvetike-seven-color, year 1940). In 1995, a commemorative coin worth 25 rubles was issued in Russia, which was dedicated to the work of the SP-1 expedition.

Ctrl Enter
Noticed oshЫbku Highlight text and press. Ctrl + Enter
We are
The famous explorer of the North. Ivan Dmitrievich PapaninBe a hero
21 comment
Information
Dear reader, to leave comments on the publication, you must to register.